Advocates hope California’s new law to stop internet providers from favoring certain content or websites will push Congress to enact national rules or encourage other states to create their own.

But legal experts say it’s possible a judge will put the law on hold while the litigation plays out. If that happens, the delay could be significant because the issue appears destined for the U.S. Supreme Court.

California Gov. Jerry Brown signed a law Sunday that prohibits internet service providers from blocking or slowing data based on content or from favoring websites or video streams from companies that pay extra. It also bans “zero rating,” in which internet providers don’t count certain content against a monthly data cap – generally video streams produced by the company’s own subsidiaries and partners.

The U.S. Department of Justice sued immediately, arguing that the federal government has exclusive authority to regulate the internet.

Stanford University law professor Barbara van Schewick said the law adopts the same nationwide rules the Federal Communications Commission repealed in June. The constitutionality of California’s law – and whether other states can adopt their own net neutrality rules – depends heavily on the outcome of a pending case in a Washington, D.C., federal appeals court, van Schewick said.

When the FCC repeated the Obama-era rules last year that prevented companies from exercising more control over what people watch and see on the internet, it also barred states from crafting their own rules like the California law by Democratic Sen. Scott Wiener.

Net neutrality advocates worry that without rules, internet providers could create fast lanes and slow lanes that favor their own sites and apps or make it harder for consumers to see content from competitors.

In response, the California attorney general and 21 other state attorneys general filed a lawsuit in January in the D.C. Circuit Court of Appeals seeking to invalidate the FCC rollback.

The appeals court has yet to rule and van Schewick and other legal analysts expect an appeal to the U.S. Supreme Court, which will likely guide the outcome of the latest lawsuit.

The DOJ and California are wrangling over the legal notion of “pre-emption” and whether the FCC is the sole regulator of net neutrality.

But with net neutrality, Martin said the FCC insists it remains the sole regulatory authority despite its deregulatory actions.

Martin said it’s a rare pre-emption argument, but it’s not novel. A federal agency tasked with setting airline routes and fares was abolished in the 1970s, but states are still not permitted to adopt their own airline rules.

Regardless of the eventual outcome, Martin also believes a federal judge in California will stop the state’s law from taking effect while the lawsuit remains unresolved.

Boston College of Law professor Dan Lyons said federal lawmakers are key to settling the argument between the FCC and California and other states seeking to set up their own rules.

“The only way the issue will go away completely is if Congress passes a statute over net neutrality,” Lyons said. “Congress has not made clear what role if any the FCC should have regulating the internet.”

Lyons wasn’t optimistic that was occurring any time soon.

“The only lasting settlement would be bipartisan congressional legislation,” he said. “I don’t see it happening in the near future.” 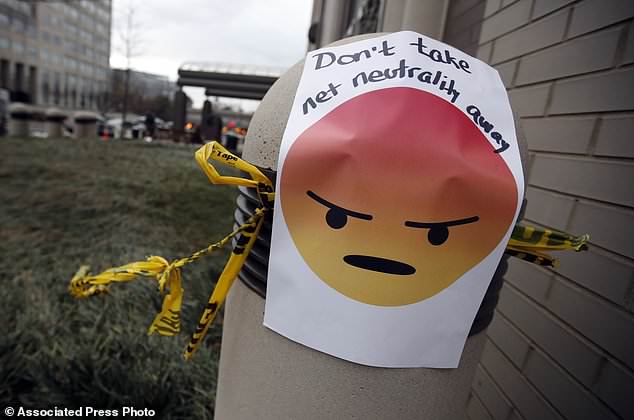 FILE- In this Dec. 14, 2017, file photo, a sign with an emoji reads “Don’t take net neutrality away” is posted outside the Federal Communications Commission (FCC), in Washington. California Gov. Jerry Brown has approved the nation’s strongest net neutrality law, prompting an immediate lawsuit by the Trump administration and opening the next phase in the battle over regulating the internet. (AP Photo/Carolyn Kaster, File) 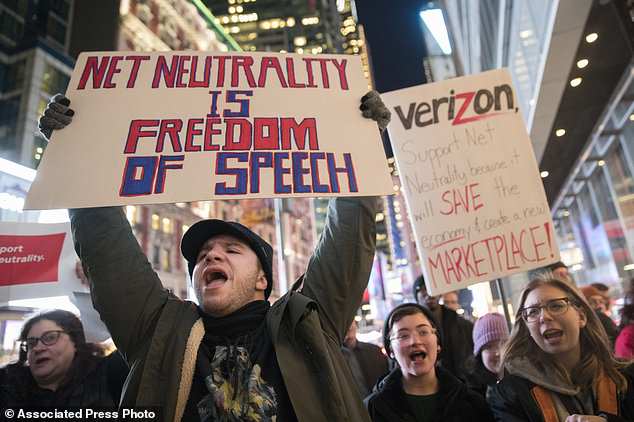 FILE – In this Dec. 7, 2017, file photo, demonstrators rally in support of net neutrality outside a Verizon store in New York. California Gov. Jerry Brown has approved the nation’s strongest net neutrality law, prompting an immediate lawsuit by the Trump administration and opening the next phase in the battle over regulating the internet. (AP Photo/Mary Altaffer, File)