Londoners have spotted a dolphin in the River Thames swimming through the capital.

Twitter users filmed the creature in the water in Putney, Wandsworth, south west London yesterday and others claim to have seen it in frolicking in Hammersmith, Greenwich and Chiswick.

Wandsworth is approximately 40 miles from the mouth of Thames, meaning the sea mammal will have swum all that way before reaching the capital.

A dolphin (pictured) has been spotted in the River Thames in Putney, Wandsworth

Such sightings are relatively rare, but one was reportedly seen in Richmond in May and near the Palace of Westminster earlier this year.

Amy Clayfield posted a video of the animal on social media saying: ‘There’s a dolphin in the Thames!’

The 25-year-old told MailOnline: ‘It was at about 2.45pm and I was stood on Putney Bridge with my girlfriend. I had just taken a photo of her and just as I took it I spotted a fin.

After spending half an hour in a nearby pub, the sea mammal was still there. 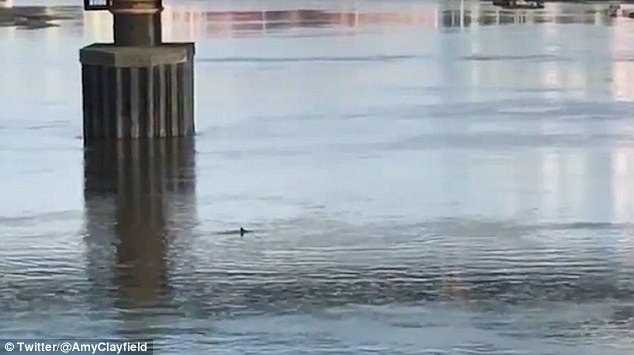 Londoners took to Twitter to express their delight and concern for the sea mammal, who was spotted swimming near Putney Bridge

She added: ‘When we left the pub, we then walked along the river and it appeared again, by this time there were people in small boats following it and taking photos.’

Howard Adams was concerned the dolphin looked distressed, saying: ‘There is a dolphin in the Thames. Putney Bridge London. Looks in distress. Downstream of bridge. 20 yards.’

An RSPCA spokesman told MailOnline: ‘The RSPCA has been made aware of a dolphin which has been spotted in the River Thames in the Putney area of London.

‘We are liaising with British Divers Marine Life Rescue (BDMLR), who are monitoring the mammal, and are available to assist their teams if necessary.

‘Anyone who is concerned for the welfare of an animal should contact the RSPCA’s 24-hour emergency hotline on 0300 1234 999 for help or advice.

A spokesman from the British Divers Marine Life Rescue group confirmed they had also been made aware of the dolphin. 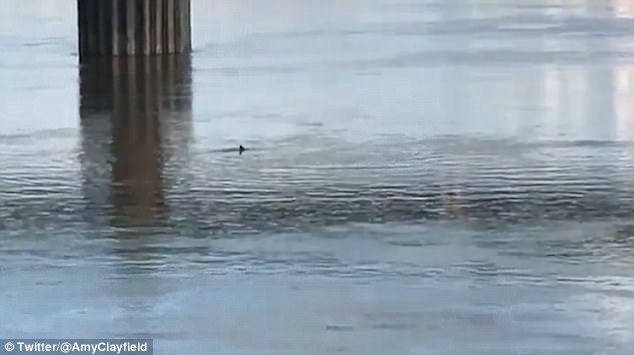 Amy Clayfield saw the animal yesterday afternoon, but others have seen it swimming in Chiswick and Greenwich

They told MailOnline they were ‘not concerned about it’ as it was ‘just swimming’ and did not appear to be in any distress.

They added: ‘It’s not unheard of, but porpoises are more common in the Thames.

‘This one is quite visible so people have been calling us about it.’

The last time a dolphin was spotted in London was in Richmond upon Thames by Olympic swimmer Andy James.

Posting a video of the finned animal on Twitter in May, the bronze medalist said: ‘Ok …. you may all think I’m mad, but I just saw a Dolphin in the river Thames at Richmond.’

Mr James, who won bronze at the 1988 Seoul Olympic Games, said the marine animal was travelling up the river from Twickenham before reaching boats moored near Richmond Bridge. 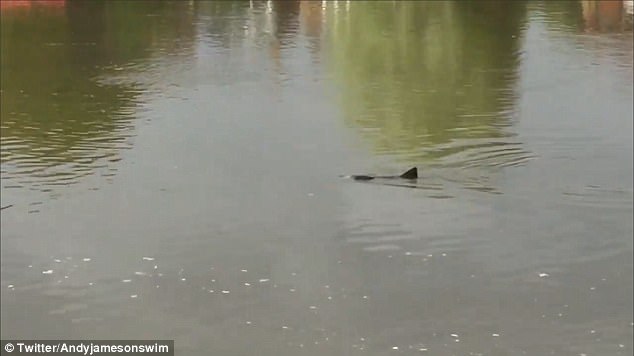