Dolphins are slaughtered by laughing fishermen in the Faroe Islands

Shocking video footage shows dozens of dolphins and whales being slaughtered by hand in the Faroe Islands earlier today.

The herding and killing of at least 100 white-sided dolphins and pilot whales took place in Hvalvik on the Faroese island of Streymoy.

The brutal killing of the marine animals, who are traditionally hunted in the Danish Atlantic Ocean archipelago, was broadcast live on Facebook by marine wildlife charity Sea Shepherd.

Graphic: More than 100 dolphins and whales were killed during today’s hunt in Hvalvik on the Faroese island of Streymoy 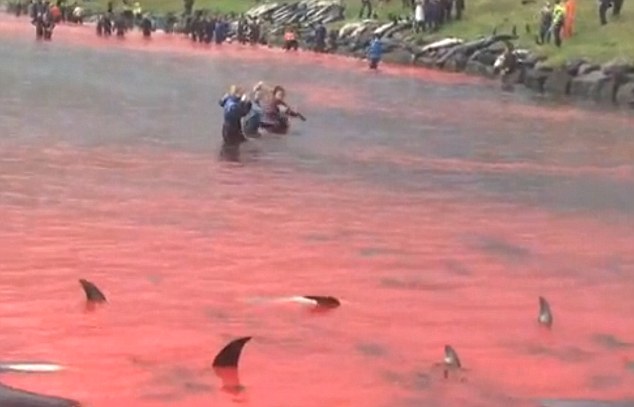 Hunters: Dozens of islanders were seen taking part in the killing of the dolphins and whales after they head been herded into the bay by boats

While regulations state that dolphins and whales should be killed using a special tool, the video appears to show islanders using normal knives.

Every summer, some 800 whales and dolphins are killed for their meat across the Faroe Islands, a Danish archipelago located hundreds of miles off the Scottish coast between Norway and Iceland.

Tuesday’s hunt, filmed by Sea Shepherd, an international marine wildlife conservation non-profit campaigning to end killing of dolphins and whales in the archipelago, was the 11th carried out on the Faroe Islands during the 2018 hunting season.

The footage shows islanders wading around in the water, which turns increasingly red by the minute, killing dolphins by cutting their necks open.

Whale driving on the Faroe Islands date back to the late 16th century and involve residents herding pods of whales into shallow waters. 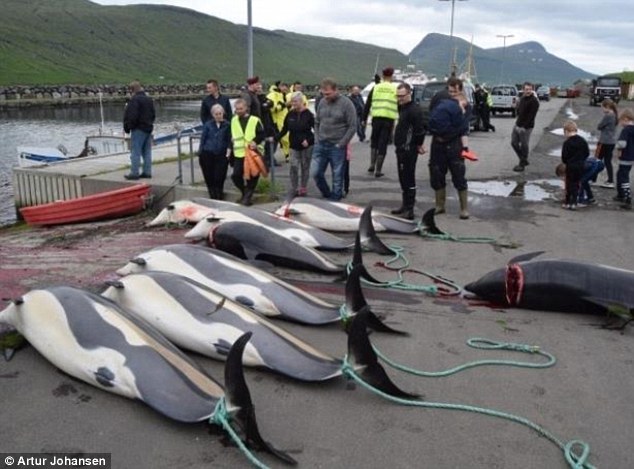 Big catch: Some of the dozens of white-sided dolphins killed in Hvalvik on the Faroese island of Streymoy 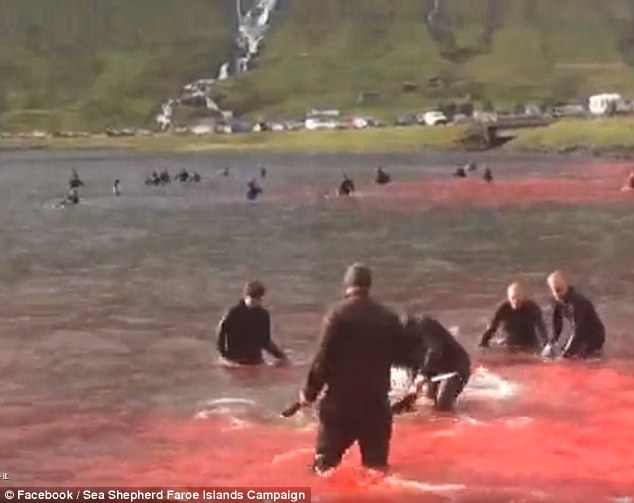 Traditions: Whale driving on the Faroe Islands date back to the late 16th century 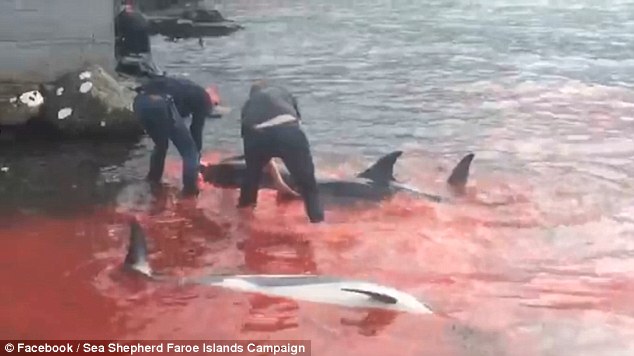 Method: The whales and dolphins are meant to be killed using a special ‘spinal lance’ that breaks its spinal cord 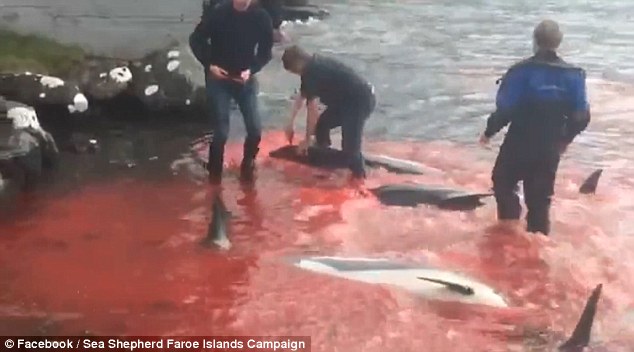 Unclear: It has however been claimed that some of the dolphins hunted on Tuesday were killed by using a normal knife

They are then killed using a ‘spinal lance’ that is inserted through the animal’s neck to break its spinal cord.

However, today’s hunt appears to have been carried out using both spinal lances and normal knives, which is likely to be a slower and more painful process.

The locals, who eat both meat and blubber as well as other body parts, carry out the butchering in the open, and the process can seem graphic and brutal to outsiders.

As more of the dolphins and whales are killed, those still waiting to be butchered are seen swimming around in their pod’s blood.

The hunts have been criticised by animal rights campaigners, who say the ritual is cruel and unnecessary.

The local government says the hunting is not only sustainable, but ensures that the 18 islands, which has a limited opportunities for farming, are as self-sufficient as possible. 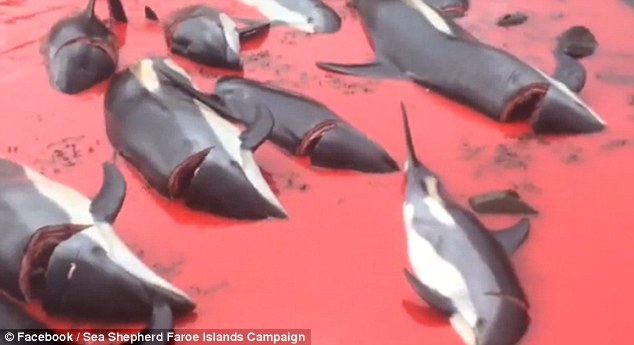 Red sea: The carcasses of some of the more than 100 dolphins and whales killed Tuesday 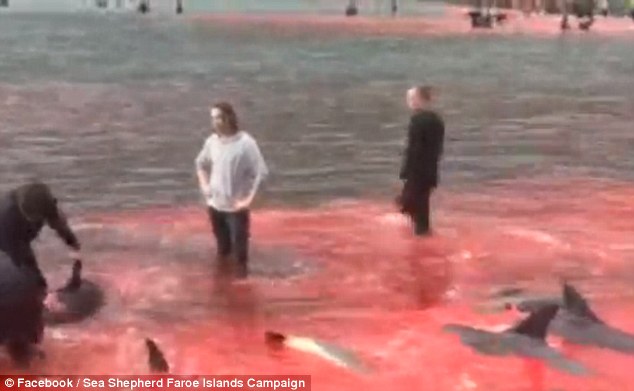 Each whale provides several hundreds of kilos of meat and blubber, food which would otherwise have to be imported from abroad to the islands at a cost to the locals and the environment.

It is estimated that the pilot whale population in the eastern North Atlantic is about 778,000 individuals, with approximately 100,000 around the Faroe Islands. The Faroese hunt on average 800 pilot whales annually.

‘Whaling is a natural part of Faroese life and an important supplement to the livelihoods of Faroe Islanders,’ a spokesperson for the Faroese government told MailOnline.

‘All meat, including whale meat, involves the slaughter of animals.

‘There is no doubt that the pilot whale hunts are a dramatic sight to people unfamiliar with the hunts and slaughter of mammals. The hunts are, nevertheless, well organised and fully regulated.

‘Faroese animal welfare legislation, which also applies to whaling, stipulates that animals shall be killed as quickly and with as little suffering as possible.

‘The methods used ensures that the whales lose consciousness and die within a few seconds. Normally, the entire pod of whales is killed in less than fifteen minutes.

‘It has long since been internationally recognised that pilot whale catches in the Faroe Islands are fully sustainable.’