BALTIMORE (AP) – As a reward for going three days between games, the Miami Dolphins and Baltimore Ravens now get an extended break before returning to action.

Boy, can they use it.

The Dolphins (4-3) have to find a way to get their offense moving, and they have to decide whether to use Jay Cutler or Matt Moore at quarterback.

The Ravens (4-4) can only hope quarterback Joe Flacco uses the time off to recover from the concussion he received in a 40-0 win over Miami on Thursday night.

In the midst of one of his best performances of the season, Flacco was hit high by Kiko Alonso while sliding at the end of an impromptu run near the end of the second quarter. Flacco’s helmet flew off his head, and the 10-year quarterback appeared wobbly as he struggled to his feet.

Flacco was initially placed in concussion protocol, and by halftime was ruled out.

“Joe had a concussion and a cut ear,” coach John Harbaugh said. “They were stitching it up without any anesthesia, so he’s a tough dude. That’s as much as I know.”

The coach hopes that tough dude is ready to play on Nov. 5, when Baltimore faces Tennessee on the road.

Miami, meanwhile, was looking for so much more from Moore in his first start of the year. Subbing for the injured Cutler (ribs), Moore went 25 for 44 for 176 yards.

If Cutler is healthy on Nov. 5, he will likely start against Oakland.

Some things we learned about the Ravens and Dolphins:

A BIT TOO SIMPLE: With a team that’s been held scoreless twice in five weeks and a fill-in quarterback, Miami coach Adam Gase has tried to simplify the offense for the Dolphins.

The problem with that is, it’s become too easy for the defense to recognize what’s going on.

“One hundred percent, that’s what it is,” Gase said. “That’s what happens when you cut it back like that: It becomes a little easier to defend. We got to start doing something right.”

SQUASHING THE RUN: The Ravens came into the game dead last in the NFL in run defense after going a league-record 21 straight seasons holding teams to less than four yards per carry. Opponents were averaging 4.2 yards per carry, and Baltimore was determined to put a stop to that.

“That’s not what we’re about, giving up a bunch of yards in the running game,” Harbaugh said. “They took it personally. I’m sure they did.”

The Ravens allowed the Dolphins only 45 yards on 19 carries, a 2.4-yard average.

AN EASY FIX?: In a lot of ways – communications issues, the inability to stop the run, not pressuring the opposing quarterback – the Dolphins defense has only itself to blame for its shoddy performance. Accepting responsibility for the self-inflicted wounds and eliminating them is where defensive end Cameron Wade thinks Miami’s turnaround must start.

“As much as that’s frustrating, that’s probably the easiest thing to fix,” he said.

NOT SATISFIED: Winning a game in record-breaking fashion can be intoxicating. To Terrell Suggs, the Ravens’ most lopsided shutout in franchise history means they simply have to work harder to do it again.

Baltimore lost four of five before coming up big against the Dolphins in a must-win situation.

SHUTOUT ENCORE: The Ravens now have two shutouts in a season for the first time since 2006.

“We have a standard to keep in Baltimore,” defensive tackle Brandon Williams said. “What you saw is exactly who we are: a hard-nosed team, a defense that runs to the ball and stops the run, gets a bunch of tackles in the backfield.”

The backfield played well, too. C.J. Mosley and Jimmy Smith scored on interception returns, the fourth time in Ravens history that the defense has tallied two TDs in a game. 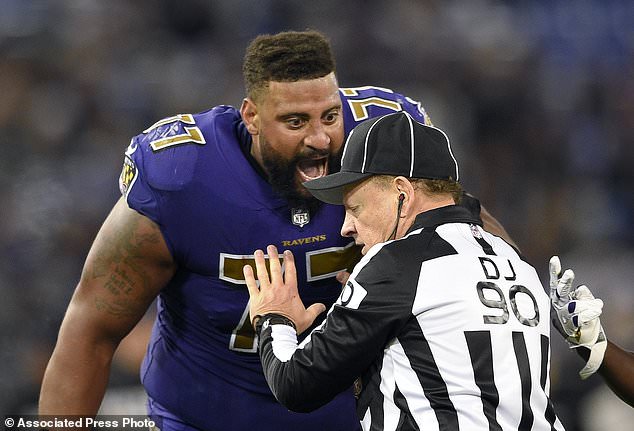 Baltimore Ravens offensive tackle Austin Howard, left, speaks with down judge Mike Spanier in the second half of an NFL football game against the Miami Dolphins, Thursday, Oct. 26, 2017, in Baltimore. (AP Photo/Nick Wass) 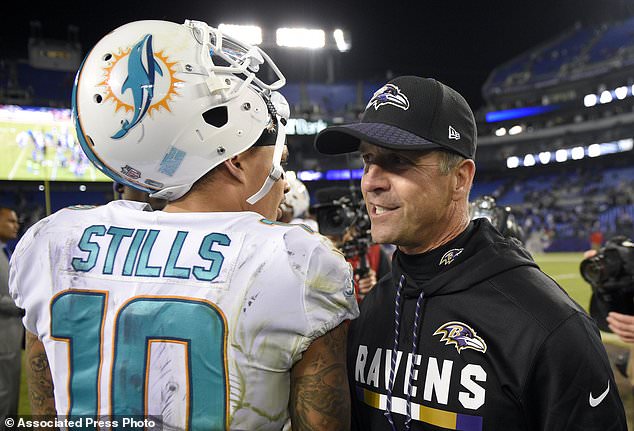 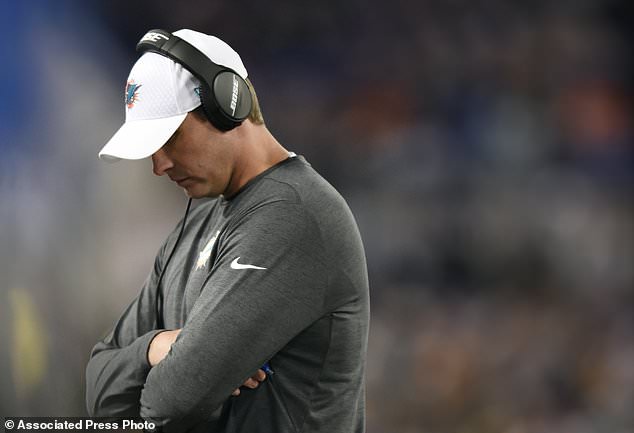 Miami Dolphins head coach Adam Gase walks on the sideline in the second half of an NFL football game against the Baltimore Ravens, Thursday, Oct. 26, 2017, in Baltimore. (AP Photo/Gail Burton)