An impressive piece of world-leading machinery that made life easier for countless commuters is now a massive headache.

The Domain Express Walkway, also known as the Domain Travelator, is one of Australia’s lesser-known landmarks stretching a whopping 207m underneath Sydney’s bustling CBD.

It was once the longest travelator in the world when it opened 61 years ago, and still holds the No.1 position the Southern Hemisphere.

The conveyer belt walkway links the Domain parking station on Sydney Harbour with the city’s iconic Hyde Park and is a five-minute journey when operational – which, as many locals and tourists have found out, is extremely rare.

For more than two years, the travelator has failed to work properly, with numerous holes in the tunnel’s ceiling that leak water on a rainy day, large pieces of rubber missing from the moving belts and several areas of smashed glass.

Anyone brave enough to park in the Domain are forced to walk the massive distance to and from the CBD, with frustrated commuters unable to recall the last time the walkway was in working order. 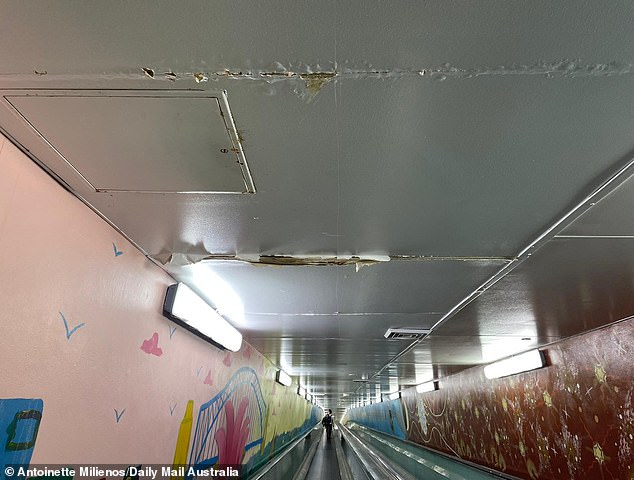 The Expressway, which stretches 207,, is in a degraded state forcing commuters to find alternate routes (pictured, deteriorating ceiling of the walkway) 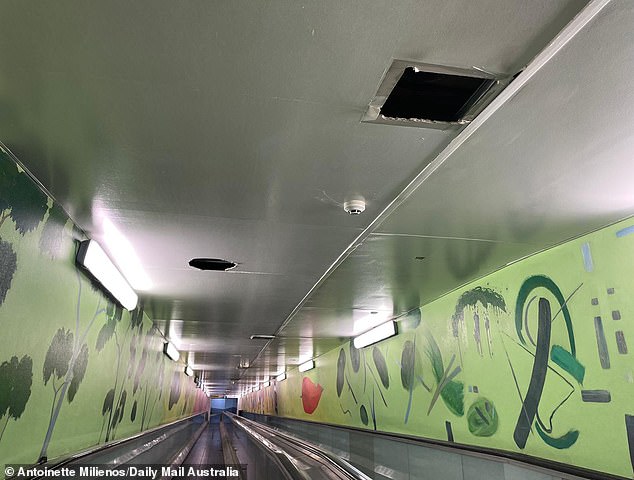 There are multiple holes in the ceiling, which leak water on a rainy day 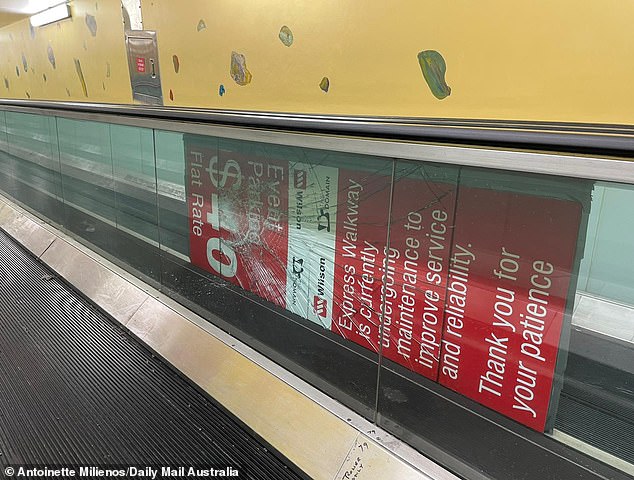 Daily Mail Australia spoke to a number of these commuters, including 92-year-old Shirley McMullen, who has used the travelator for more than eight years.

Ms McMullen said she uses it every Sunday as a way to get from her car to the St James Cathedral for a 10am service.

‘I’m no spring chicken, so just as well I had my granola for sustenance this morning.’

Ms McMullen, who lives in north Sydney, said she often prayed the travelator was working on her drive to the carpark but was left in an even more precarious position on December 4 after she forgot her walking stick.

Finding it hard to endure the long, uphill walk, Ms McCullen was forced to stop four times to catch her breath.

‘I need a swig of water after that hike,’ Ms McMullen said.

‘Just as well my son packed me some water in my bag.’ 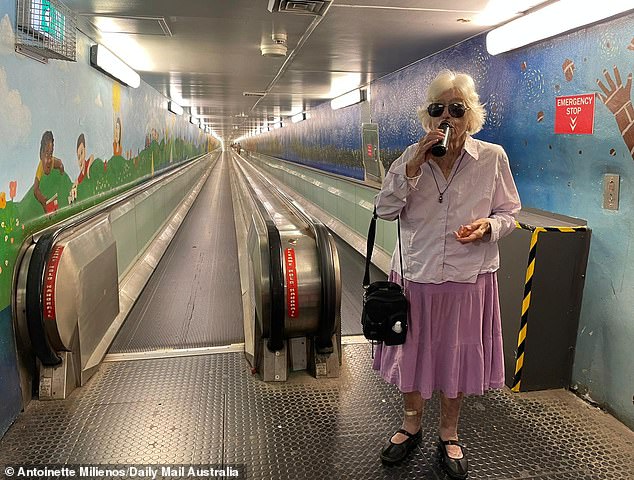 Shirley McMullen, 92, (pictured) has used the travelator for more than eight years and has to walk the 207m every Sunday to attend church due to it not working 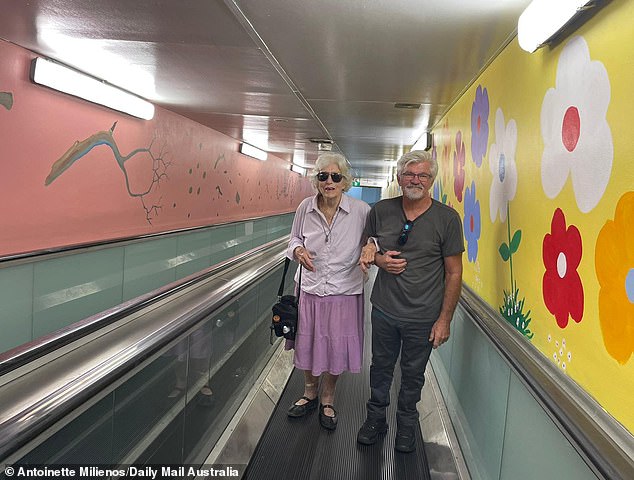 The 92-year-old struggled up the steep incline and said the moveable walkway has not worked for more than three years (pictured, Shirley McMullen with Domain mural artist Tim Guider)

Ms McMullen said she has been forced to walk the travelator every Sunday for the past three years and said it used to work prior to the pandemic.

She believes it was stopped on weekends because people are only charged $12 on Sunday to park their car – which she says is not enough to cover the costs of running the walkway.

However, other commuters told Daily Mail Australia it had been at least two years since the ‘expressway’ had functioned on any day of the week.

‘Maybe too expensive run? Last time I remember it working was pre-Covid,’ one person said.

‘I’ve been using it on the weekend for 20 years and I don’t remember it ever working,’ another added.

‘I don’t think it’s ever going to work again,’ a third said.

‘It’s no longer an express walkway. It’s getting ridiculous the amount of time it’s been down for.’

Another couple was seen pushing a double pram holding their two toddlers up the steep incline.

‘There’s literally nothing more gut wrenching than “out of order”,’ the mum said. 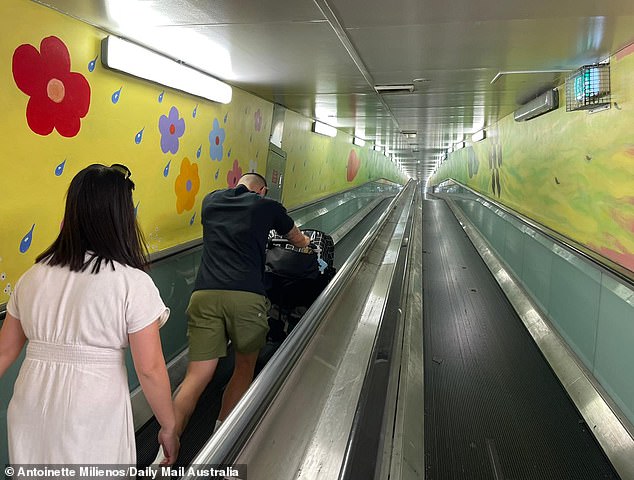 When told the travelator was 207m long, one commuter said it should be renamed to the ‘longest broken travelator in the Southern Hemisphere’.

For some, it has become a family tradition but the walkway’s degraded condition has forced others to find alternate routes.

‘We are constantly talking about the expressway in our family group chat and it’s party of our family heritage,’ one woman said.

‘We initiate all the children with a walk down the travelator but it has not worked for at least three years.

‘We’re just really disappointed our kids don’t get to experience it the way we did and it’s a real shame because the art work truly captures some of Australia’s most iconic scenes.’

On June 6, 1961, Sydney Lord Mayor Harry Jensen took his 13-month-old son for a ride on the travelator after he officially opened the walkway following a speech and ribbon cutting ceremony. 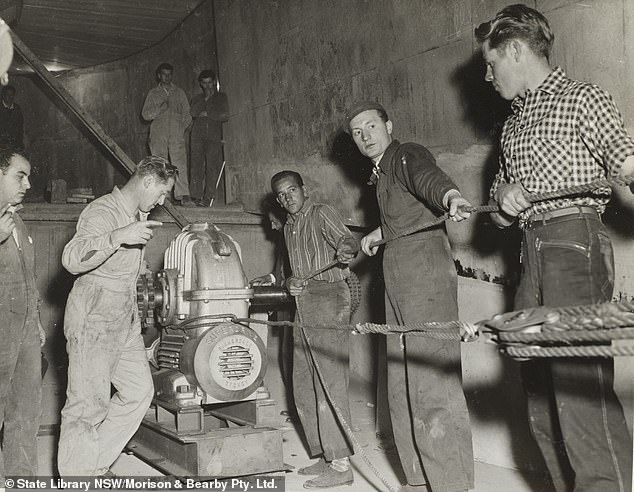 Domain’s Express Walkway, or travelator, was the largest in the world when it was first built in 1961 (pictured, construction workers  building the travelator) 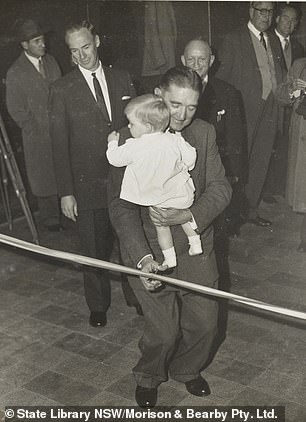 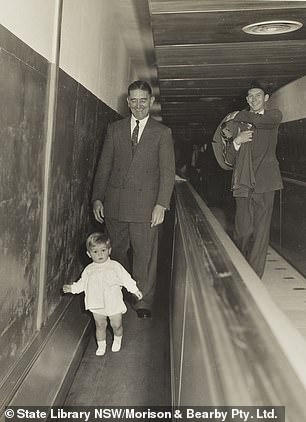 On June 6, 1961, Lord Mayor Harry Jensen took his 13-month-old son for a ride on the travelator after he officially opened the walkway following a speech and ribbon cutting ceremony (pictured)

In the 1990s, a manufacturing company, which made conveyor belts for mining companies, fabricated custom replacement belts for the travelator – and they’re still in use today.

The refurbished footway was decorated by the 1996 Tunnel Vision mural, painted by artist Tim Guider, indigenous artists, and children from nearby Woolloomooloo.

Mr Guider told Daily Mail Australia his ‘artistic moral rights’ were being violated as his mural, which includes Australia’s first illuminated public sculpture, is meant to be viewed from a moving walkway.

‘My moral rights as an artist say that, a mural like that cannot be exhibited to the public in a derogatory state,’ Mr Guider said.

‘Part of that moral right is that, when I created the mural, I created it for people viewing it from the moving travelator. Not with the travelator off.

‘When you are viewing it from the moving travelator, the mural reads much better, in terms of the visual spacing between images and the like.’ 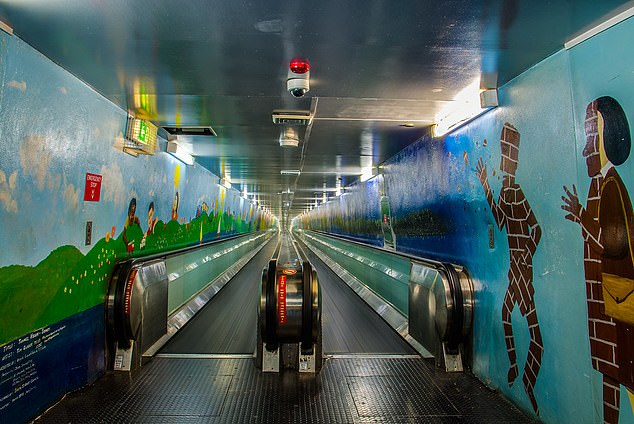 One of the reasons Mr Guider originally took on the project was that he believed its location would protect it from damage.

He is now fighting to restore the travelator back to its former ‘moving glory’ as it is one of Sydney’s first significant pieces of infrastructure and part of Australia’s cultural history.

City of Sydney Council told Daily Mail Australia the travelator – which does work but often turns off because the moving belt and hand rails are out of sync – was  managed by Wilson Parking – who in turn said the walkway fell under The Royal Botanic Gardens.

The Domain Express Walkway’s landlord is the Royal Botanic Gardens and the parking station’s tenant is Wilson Parking. 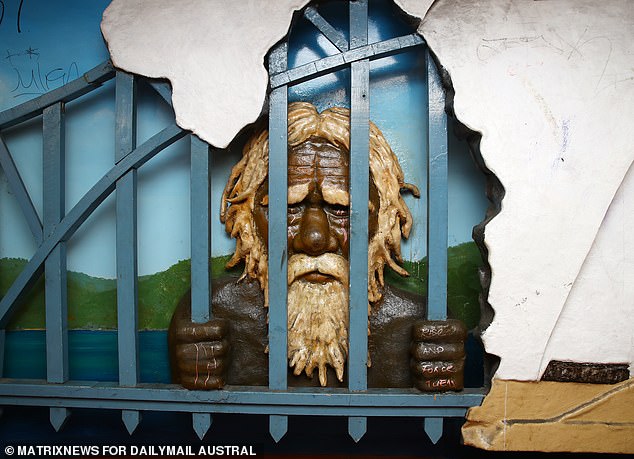 The mural was created by artist Tim Guider in 1996 and tells the story of Sydney. The most powerful element shows an elderly Aboriginal man holding onto the steelwork of the Sydney Harbour Bridge as if gripping the bars of a prison cell (pictured) 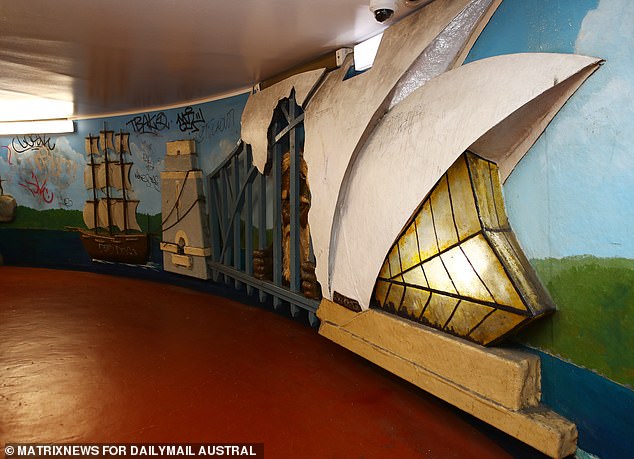 ‘Due to its age, the walkway experiences breakdowns. It has a bespoke design which makes the sourcing of replacement parts difficult,’ the spokesperson said.

‘This has been compounded by supply chain issues as a result of the pandemic.

‘We are working to ensure the car-park bound walkway is back up and running soon.’

Mr Guider suggested the owners of the walkway should use the same motor used to open the Pyrmont Bridge.

DOMAIN EXPRESS WALKWAY WAS ONCE LONGEST IN THE WORLD 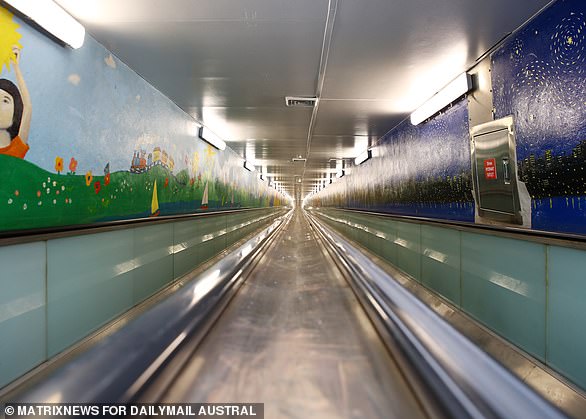 The 207m Domain Express Walkway was the longest travelator in the world when it opened 61 years ago.

Every day it moves thousands of commuters between the Domain and the central business district, where there are two entry points near St Mary’s Cathedral.

Most moving walkways are now found in airports and the Domain structure is still touted as the longest in the Southern Hemisphere.

Separate walkways run side-by-side in each direction through a tunnel. Standing still, the journey takes about five minutes.

The walkway was built to link the Domain Car Park near Woolloomoloo Bay to the northern end of Hyde Park.

At the Hyde Park end it can be entered near St Mary’s Cathedral in Prince Prince Albert Road and from the other side of College Street.

The Domain Car Park was opened in June 1961 at a time when motor vehicle ownership was rapidly increasing.

Its walkway was expected to be just the first of many similar underground travelators which would move commuters into and around the city centre but no more were built.

While the travelator initially proved hugely popular, it was and is a rumbling and noisy journey, and the novelty value soon wore off.

Much like today’s Sydney light rail the walkway was also the subject of intense media interest whenever anything went wrong.

Children were reported getting their fingers caught in the handrail and men had their trousers ripped after getting their cuffs snagged at the end of the footway.

The walkway was refurbished in the 1990s when parts were replaced by a company which manufactures mining conveyor belts.