Domestic abuse calls in New York more than doubled after the city went into coronavirus lockdown, experts have said.

Forcing partners to stay at home with their abusers combined with unemployment caused by the pandemic to spark the crisis, social workers explained.

Abusers also exploited the virus to torment their victims by refusing to give them PPE so they could leave the house, or by threatening to infect them.

Sanctuary for Families, a not-for-profit in New York which helps abuse survivors, said they received between 70 and 100 calls in a typical month before the virus.

New York went into full lockdown in mid-March as coronavirus swept the city, making in the epicentre of America’s outbreak.

Workers said the lockdown also made it difficult to talk with victims of abuse, who typically make use of windows when they or their abusers are out of the house to contact support services.

Both Sanctuary for Families and Met Council ended up establishing text communication as a safer alternative to speaking on the phone.

Similarly, women who needed to leave home also faced difficulties in finding a safe exit with their abusers around them constantly.

Nechama Bakst, senior director of Met Council’s domestic violence unit, said one woman ended up in a ‘highly dangerous’ situation with a partner who kept weapons in the house. 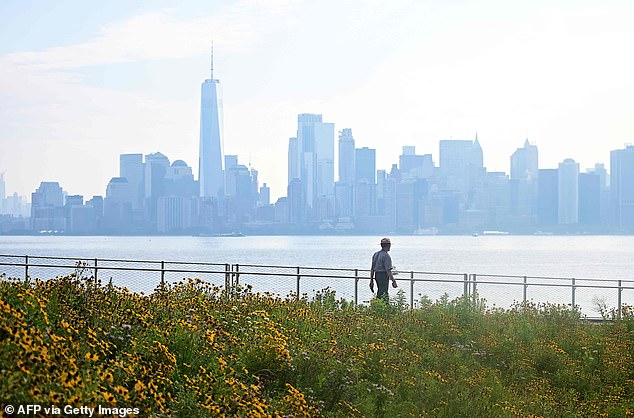 New York went into lockdown in mid-March (pictured), forcing victims into close quarters with their abusers and making it difficult to contact them or get them to safety, workers said

In order to get her and her children out, workers were forced to rely upon a 15-minute window where her partner was away.

Staff added that abusers are more likely to use violence and more likely to kill when unemployed – even as millions of people were laid off due to the shutdown.

Dorchen Leidholdt, director of Sanctuary for Families, said: ‘It was a twin tsunami.

‘On the one hand, abusers were unemployed, angry and more abusive than ever with more access to their victims than ever… and then victims were more economically dependent than ever before.’

New York suffered the brunt of America’s first wave of coronavirus infections, at one point registering more than 6,500 cases in a day as the virus swept the city.

While New York has battled the virus to a standstill, cases are now running out of control across many other US states – including California, which now has the most cases of any US state, and Florida, which surpassed New York’s tally last week.