By Andrew Brown And Kat Wong For Australian Associated Press

Millions of Australian workers will soon be eligible for 10 days of paid domestic violence leave each year.

Most employees will get access to the entitlements from February, but small businesses will have an extra six months to adjust.

The changes cleared federal parliament on Thursday with support from all sides of both chambers.

‘To all those who have experienced and are experiencing family and domestic violence, you have asked us to take action and we are,’ Employment Minister Tony Burke told parliament.

‘This bill will not by itself solve the problem of family and domestic violence, but it does mean no employee in Australia will ever again be forced to make a choice between earning a wage and protecting themselves and their families.’

‘It cannot be understated just how important winning paid family and domestic violence leave in the national employment standard is,’ she said.

‘With one in four women having experienced some form of violence since the age of 15 by an intimate partner, Australia has a critical problem with women’s safety and gender equality.’

Ms O’Neil said unions would fight to extend the leave period but ’10 days is a very important start’. 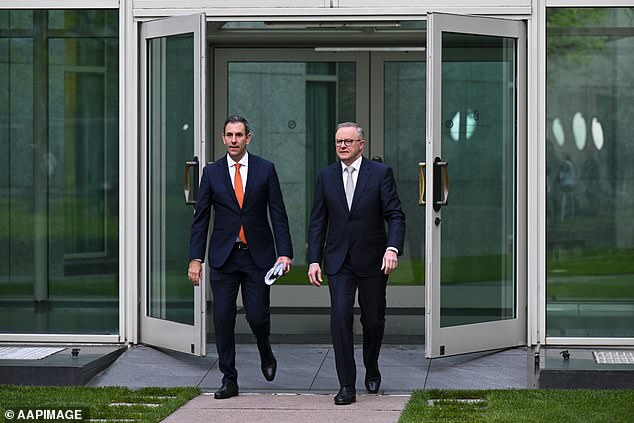 The new laws come as Prime Minister Anthony Albanese (above with Treasurer Jim Chalmers) revealed his government’s first budget, with aims to progress gender equality in the workplace

Casual workers will be eligible for the leave, while perpetrators will not be covered.

A review will be conducted next year to ensure the entitlement has been rolled out properly.

‘Women shouldn’t have to choose between work and safety. Ten days paid leave offers people the opportunity to have financial security when they need it most,’ she said.

‘We know that having access to this leave assists in removing some of the barriers that women face when trying to leave an abusive relationship and we truly believe this will save lives.’

It included $1.7 billion over six years towards women’s safety and an expansion to paid parental leave to encourage parents to share caring duties more equally.