A mudskipper fish who needed ‘urgent help to gain weight’ after being bullied by the ‘dominant’ fish in Secret Life of the Zoo left viewers close to tears.

And with Danny wasting away and at risk of being bullied or even starved to death, angry viewers were quick to take to Twitter.

‘If this land fish thing don’t start eating I might just have to cry,’ wrote one, while a second penned: ‘Asking for a friend, is it normal to be angry at a fish for bullying another fish?’

Staff at Chester Zoo told how mudskipper Arnie (pictured) is the ‘dominant’ male in the aquarium’s tank, and bullies ‘runt’ Danny, preventing him from getting food 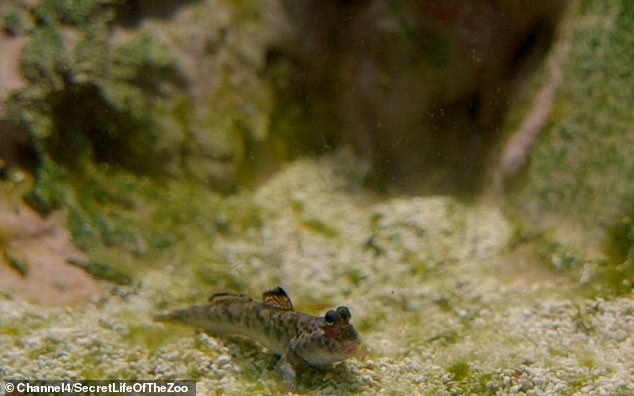 The staff described Danny (pictured) as the ‘sweetest fish’ in the entire aquarium, before explaining he spends the majority of the time at the bottom of the tank due to bully, Arnie

Viewers took to Twitter during the episode, with one commenting: ‘If this land fish thing don’t start eating I might just have to cry’ (pictured)

Staff member Hannah explained: ‘The weirdest thing about mudskippers is that they live, for most of the time, outside of the water. They breathe air and they’re land-dwelling fish – and it is possible to drown a mudskipper.’

With a clear group structure, they signal their dominance by flashing a huge flag-like fin.

‘Mudskippers are full of attitude. Very territorial,’ said Andrea, another member of staff concerned for Danny’s welfare. ‘You always have somebody who is king of the entire tank – and then you get the one at the bottom, who doesn’t do very well.’

‘Danny is one of the sweetest fish we have in the entire aquarium.’

Hannah added: ‘Danny is a bit skinny, a little bit runty maybe. He spends a lot of time in the water – that means he’s the lowest in the group.’ 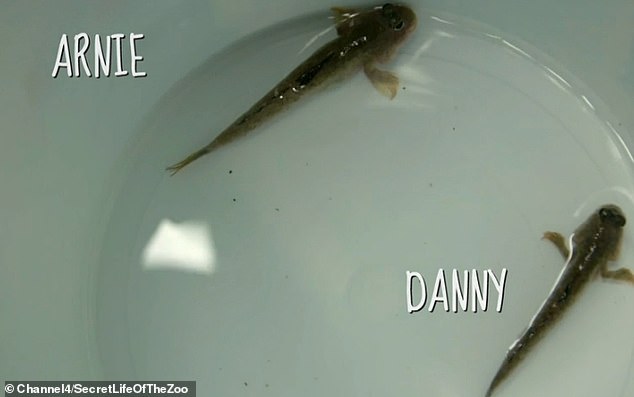 The team weighed both fish, and discovered Arnie was double the size of Danny, who was wasting away (pictured together)

Viewers were quick to take to Twitter, with one suggesting: ‘Separate Danny from Arnie and feed them’ (pictured)

But on top of the rock, holding prime territory, is Arnie.

‘Arnie is totally dominant over the rest of the group,’ said Hannah. ‘There’s no questioning he’s the mudskipper in charge.’

Andrea continued: ‘All the ladies in the tank like him, all the men in the tank want to be like him – so they’re all perched on the branches next to him.’

‘At feeding time Arnie is straight up there, buries his face in the food and just eats as much as he wants.’

However, the one that doesn’t have the courage to challenge him to actually feed is Danny.

‘Whenever he tries to come up to the feeding stations, Arnie is straight on him and doesn’t let him get any food,’ explained Andrea.

‘It gets to the point Danny is trying to leave the water to take a gulp of air and Arnie is already on him. That means he spends a lot of the time at the bottom of the tank and not getting access to the food he needs to be healthy.’ 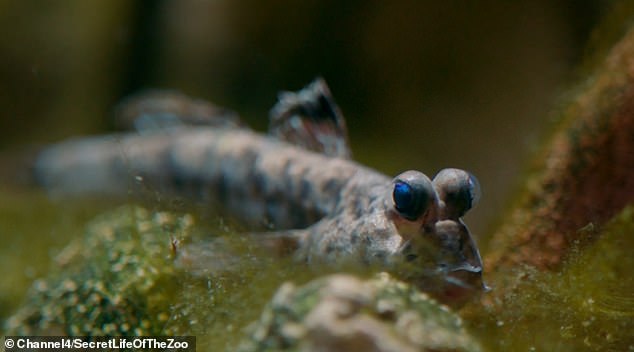 The staff explained the moment Danny (pictured) tries to leave the water to take a gulp, Arnie is already on him 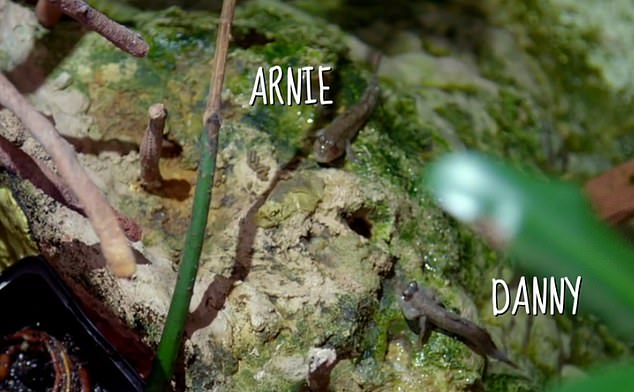 After increasing the temperature of the tank, Danny finally claimed top position on the rock (pictured)

Concerned for Danny, the team monitor his weight, which is 4.2g, while Arnie is weighed for comparison, too.

‘He is a bit of a beast,’ said Andrea. ‘Normally mudskippers weigh about 6g, but he weighs about eight. He is more or less double his weight.

‘At the moment, Danny looks like his head’s too big for his body because his body is so small.’

In need of urgent help to gain weight so he doesn’t waste away, the staff come up with a plan – to increase the temperature in the tank.

‘Hopefully everybody’s metabolism will increase a little bit, which means everyone will be more active and moving around more,’ explained Hannah.

‘This means at feeding times, Arnie could be distracted by other mudskippers. That could give Danny a chance to sneak in and get the food he needs.’

And four days after the heater was switched on, Danny finally claimed top spot and tucked into a bumper feast of mashed blood worm.

However, those who tuned in suggested other ways in which Danny could’ve been fed quicker.

‘Little more the team can do? Put Danny in a different tank till he gains weight. There, simple,’ wrote one, while a second commented: ‘Poor Danny.’

A third suggested: ‘Separate Danny from Arnie and feed him then.’