DOMINIC LAWSON: How ironic that Farage the City boy could help Corbyn crash the economy

The longer Brexit is delayed, the less likely it is that this Parliament can continue to sit: or at least, not with any sense of purpose or self-respect.

If it continues to frustrate what both the Conservatives and the official Opposition promised to do — honour the result of the 2016 referendum — then there may be no satisfactory alternative to the election of a new parliament which would be up to the job.

This is also the argument of Nigel Farage, leader of the Brexit Party. And he is having remarkable success: according to a poll in yesterday’s Sunday Telegraph, if a General Election were held now, his party would pick up 20 per cent of the vote and win 49 seats.

That would chiefly be at the expense of the Conservatives.

Nigel Farage’s Brexit Party is predicted to win the largest share of the vote in the upcoming European Parliament elections and, according to a new poll, 49 seats if a General Election were held now 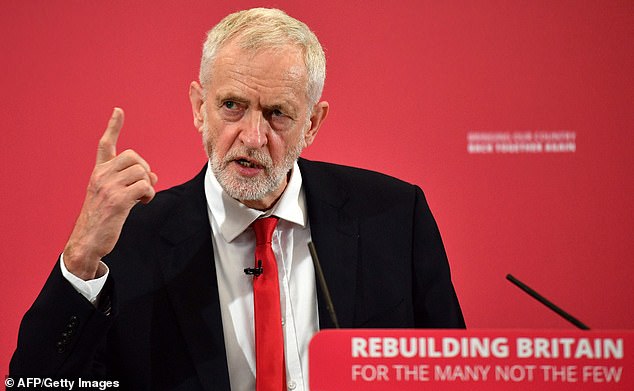 The collapse of the Conservative vote would pave the way for Jeremy Corbyn, propped up by the SNP, to take the keys to Number 10

The most significant consequence, however, would be Labour winning well over 300 seats, way ahead of the Tories.

On this basis, Jeremy Corbyn, with the support of the Scottish National Party, would become Prime Minister, and John McDonnell Chancellor of the Exchequer.

That would not bring about the Brexit that Nigel Farage wants.

Labour is fundamentally a Remain party, and even if it were to take the UK out of the EU, it would be only on the basis that we remained permanently part of the Customs Union: it has repeatedly said as much.

McDonnell claims such an arrangement should be welcomed by business, and he has been pushing this line as he travels round the country’s boardrooms trying to allay their fears of what a Corbyn-led Labour government would mean.

If they believed him, then their brains would need to be constructed of the same material as their boardroom tables — solid wood.

In fact, yesterday’s Sunday Times reported on the rising panic of the billionaires on its annual Rich List: a number of them told the paper they were already making plans to move their assets to other countries, ahead of a feared Labour election victory.

This squealing is entirely counter-productive. 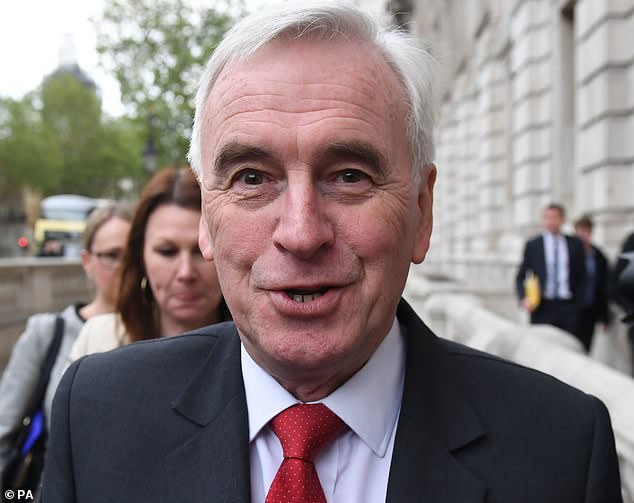 No one has sympathy for billionaires fleeing from new taxes. Not least because they make up only 0.00002 per cent of the population. And they will be just fine, whatever happens, not just because of their accumulated wealth, but also because they are highly mobile, with accountants who know how to make their money equally so.

In any case, as the director of the Institute for Fiscal Studies, Paul Johnson, observes of Labour’s soak-the-rich policy: ‘Sadly, there aren’t enough billionaires to generate serious revenue [for Labour’s additional public spending plans].’

So what about the top one per cent? You wouldn’t know it, to listen to Corbyn and McDonnell, but such citizens — those with assets of £3 million or more — already provide 28 per cent of all the income tax received by the State (while earning around 11 per cent of total household income).

So as one Bank of England official put it to me (and he’s no died-in-the-wool Tory): ‘Our income tax base is already dangerously narrow, over-dependent on a small proportion of the population.’

Bear in mind that the Conservative-led governments since 2010 have, by steadily raising the threshold at which income tax begins to be levied, removed millions of families from the obligation to pay.

But if Labour aren’t able to raise from personal taxation of the rich all the extra billions they say they will provide for public services, where will it come from? The not-so-rich. And businesses. 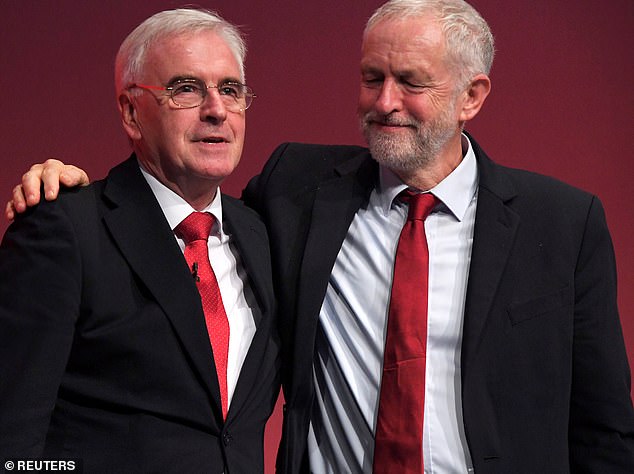 The top one per cent of earners provide 28 per cent of all the income tax received by the State – although, to listen to Corbyn and McDonnell, you wouldn’t know it, writes Dominic Lawson

But capital is mobile, too. The Marxists around Corbyn realise this. One of them told the Sunday Times that the party should prepare for ‘a capital strike’ and ‘the partial withdrawal of private sector investment’ but that in government Labour should nevertheless proceed with ‘the thin end of a thick socialist wedge’.

Well, it may be that the wider electorate could be oblivious to that until too late, like so many frogs cooked in water heated to boiling point only gradually. But there is nothing gradual about Labour’s stated plan to expropriate ordinary shareholders, by passing 10 per cent of the equity in large quoted companies to the workers in those firms.

Jolly nice for the employees to get free capital, but not so for our pension funds, which would be the main losers in such a scheme.

In fact, even before such a law could be passed, large funds would take their capital out: the result, obviously, would be less investment in British companies.

The same consequence flows from Labour’s plans to renationalise various industries at below market value: the flight of capital would not wait for Labour to be elected. If it seems likely that it will form the next government — and that is what the latest polls suggest — then the disinvestment process begins. 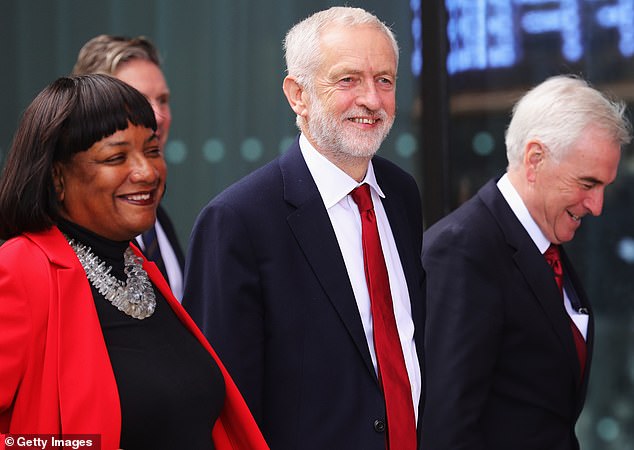 One thing is known about Corbyn and McDonnell (pictured with Diane Abbott). They regard those who create wealth as anti-social. They judge all successful entrepreneurs to be parasites on the backs of the workers

Indeed, this is already happening. While falls in investment in plant and machinery are blamed on Brexit, a number of business leaders told the Spectator they fear a Marxist-led government much more than they fear the UK leaving the EU. They say that while the ‘upsides and downsides’ of Brexit are well-known, a Corbyn government is ‘a much greater unknown’.

But one thing is known about Corbyn and McDonnell.

They regard those who create wealth as anti-social. They judge all successful entrepreneurs to be parasites on the backs of the workers.

This, by the way, helps explain the rancid anti-Semitism that now pollutes the Labour Party: many who share Corbyn’s world-view see Jews as inherently ‘capitalist’ and their success in trade as nefarious rather than admirable.

That such anti-Semites should be in sight of getting the government they want is profoundly unsettling. It would be a particular irony if the person who helped bring it about was that former commodity-trader and passionate free-market advocate, Nigel Farage.

Emily Maitlis is not known for her indulgence as an interviewer: she is perpetually alert to any dodgy claim by politicians in her studio.

So I was amazed by the way, on BBC2’s Newsnight last week, she allowed Lord Heseltine to get away with a characteristically brazen association of himself with Winston Churchill.

The former Deputy PM, in arguing his case that we should remain in the EU regardless of the 2016 referendum, told Maitlis: ‘Every Prime Minister I’ve worked for, and I started working for Winston Churchill after the war, has told me that Britain’s self-interest is inextricably linked to the peace and security of Western Europe.’ 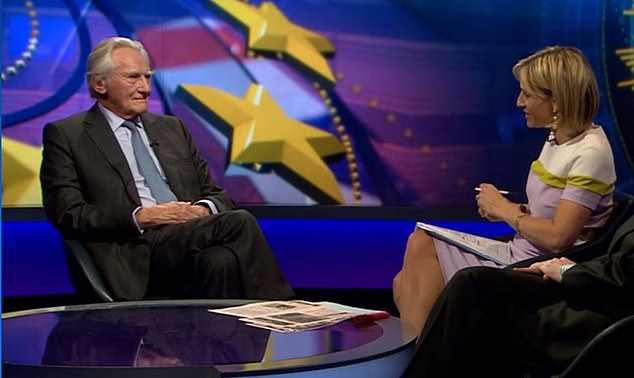 On BBC2’s Newsnight last week, Emily Maitlis allowed Lord Heseltine to get away with a characteristically brazen association of himself with Winston Churchill, writes Dominic Lawson 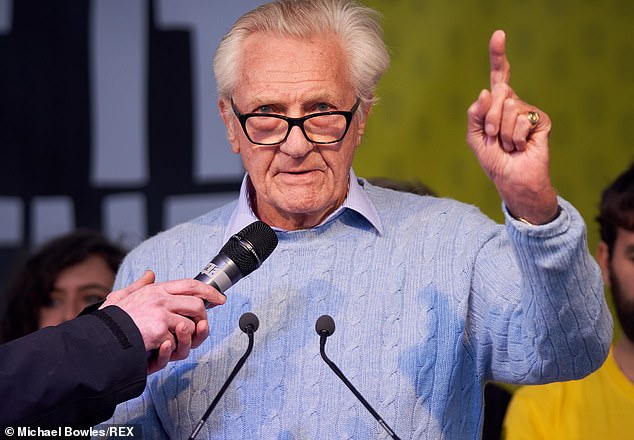 When Heseltine addressed the rally outside Parliament (pictured) to demand a re-run of the referendum, he very personally linked his insistence on remaining in the EU to Winston Churchill’s heroic leadership in the dark year of 1940

Leave aside the fact that it was Nato and not the EU that maintained our security during the Cold War, Heseltine never worked for, with, or under Winston Churchill.

To be clear, he first stood for Parliament in 1959, four years after Churchill resigned as Conservative Party leader.

And Heseltine didn’t actually succeed in becoming a Conservative MP until 1966 — when Churchill had already been dead for a year. 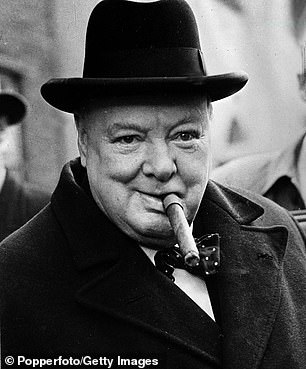 Leave aside the fact that it was Nato and not the EU that maintained our security during the Cold War, Heseltine never worked for, with, or under Winston Churchill (pictured)

I say this is characteristic because when Heseltine addressed the rally outside Parliament to demand a re-run of the referendum, he very personally linked his insistence on remaining in the EU to Winston Churchill’s heroic leadership in the dark year of 1940.

He declared: ‘Churchill did everything in his power to end our isolation [from Europe]. I was there. I saw our Army evacuated, our cities bombed, our convoys sunk.’

Hezza was there? Well, he was certainly alive. But at the time of our Army’s evacuation from Dunkirk, he was seven years old.

And not a precocious confidant of Winston Churchill — nor on any occasion later.