DOMINIC LAWSON: The return of the fox-killing barrister and a bid to exploit the PPE crisis

Attention-seekers sometimes pay a price for their vanity. One such is the lawyer Jolyon Maugham, who on December 26 last year tweeted: ‘Already this morning I have killed a fox with a baseball bat. How’s your Boxing Day going?’

The publicity-hungry QC later pointed out he was acting to protect the chickens he kept. But this hardly assuaged the fury of his erstwhile fan club.

Through his crowd-funded entity, the Good Law Project, Maugham had over the previous three years mounted a succession of legal challenges designed to block Brexit. This had made him a sort of secular saint among that minority of those voting Remain who didn’t accept the referendum verdict.

Jolyon Maugham QC, one of those behind the legal petition to gain a court order to make Boris Johnson seek a Brexit extension talks with media outside the Court of Session on October 8, 2019 in Edinburgh, Scotland

But these people tended to be metropolitan types — the sort most likely to be appalled by someone who boasted about beating to death a fox (trapped in netting, as it turned out). One wrote an article in The Guardian saying that Maugham’s ‘callous’ act and ‘aggressive masculinity’ had ‘shattered’ her view that he had been ‘a Remain hero’.

Under such a barrage of criticism from his former acolytes, Maugham suspended his Twitter account and seemed to disappear from public life (which must have been most painful).

But yesterday he popped back up, proclaiming that the Good Law Project was launching new crowd-funded litigation against the Government, this time suing it for ‘failure to procure and provide adequate personal protective equipment (PPE) for NHS and other care workers’ —on the grounds that ‘those failures have contributed to the death and serious illness of healthcare and other care workers’.

The Good Law Project is joined in this claim by the Doctors’ Association UK, founded in 2018 by Samantha Batt-Rawden, a registrar in intensive care medicine who was instrumental in organising regional industrial action during the junior doctors’ hospital contract dispute.

The claimants’ ‘letter before action’ — written by Bindmans, one of the country’s most renowned and therefore expensive firm of lawyers — states that only an immediate independent judicial review of this matter will satisfy them. 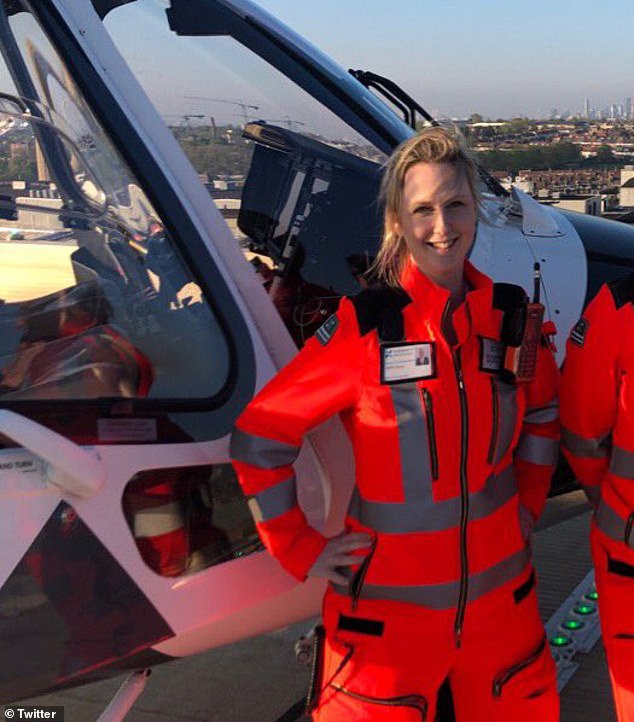 The Good Law Project is joined in this claim by the Doctors’ Association UK, founded in 2018 by Samantha Batt-Rawden (pictured), a registrar in intensive care medicine

There will, no doubt, be a full public inquiry into all aspects of the Government’s response to Covid-19, including the issue of whether NHS staff in the front line had been given sufficient protection by their employer (the state).

But when the Department of Health is still in the throes of dealing with a pandemic, is it really a good idea to burden it with the additional task of fighting off Bindmans and their team of litigators?

Not surprisingly, Maugham has found a way of bringing his previous obsession to bear on this. Bindmans’ letter makes much of the claim that the UK had ‘declined to join the EU’s joint procurement scheme’ for PPE.

But not only has that scheme produced a pathetically small quantity of the kit, the first reaction of EU countries such as Germany when the virus struck hard was, in defiance of Single Market regulations, to block their own companies from providing such protective equipment to Italy, then the epicentre of the infection.

There is no doubt that the provision of PPE to NHS staff and those working in social care has been at times chaotic and inadequate (it has varied from hospital to hospital, care home to care home).

It was to address this that a new charity, Mail Force, was established by the Daily Mail and its backers in an admirable scheme to bring in more PPE to those who need it most. 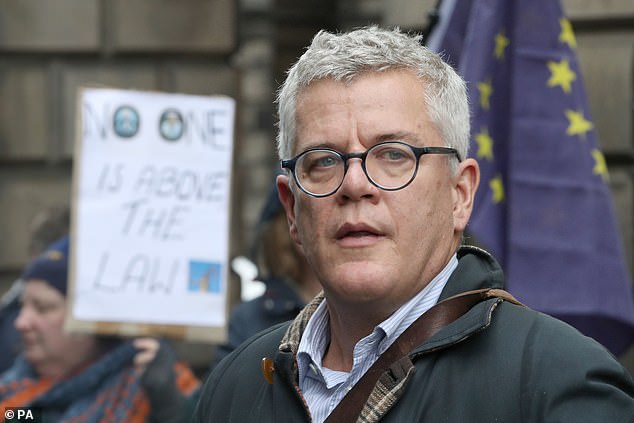 Jolyon Maugham QC, who on December 26 last year tweeted: ‘Already this morning I have killed a fox with a baseball bat. How’s your Boxing Day going?’

PPE provision has been a problem globally: even in Germany, seen as the most efficient European nation in preparing for the onslaught from Covid-19, doctors have performed protests in the nude, to emphasise what they claim to be their nakedness in the face of the risks of infection.

But here’s a question: how many doctors or nurses working in intensive care in the NHS have died from Covid-19?

The answer is: none. This remarkable finding comes from a lengthy report by the Health Service Journal (HSJ).

Three of its researchers conducted an exhaustive investigation into ‘deaths of NHS staff from Covid-19’. They looked into all of the 119 deaths of NHS and social care staff known at the time (the report came out on April 22).

They concluded that ‘among the doctors … there were no intensivists or anaesthetists’. And they added: ‘Among the nurses … none were described as intensive care nurses.’

In an update on May 5, the HSJ said that this remains the case — and since then, there have been to my knowledge no reports of any deaths of doctors or nurses working in intensive care, although the total number of Covid-19 deaths among NHS and social care employees has risen to 203.

The conclusion of the HSJ investigation was that the incidence of Covid-19 mortality within the NHS has faithfully tracked that within the entire working-age population of the UK.

Or, as it stated: ‘There is a remarkable correlation between the cumulative deaths from Covid-19 in the UK population and among health and social care workers.’

This calculation, it says, is based on the fact that ‘a modest estimate of the patient-facing NHS workforce might be 600,000 to 800,000, which is over 2 per cent of the employed population’. 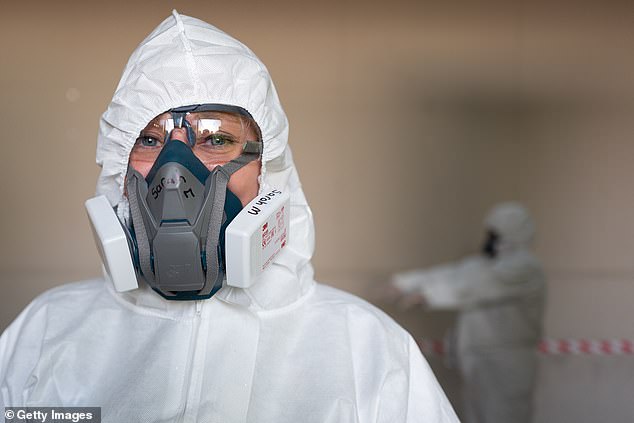 So, they conclude, since ‘the deaths among health and social care workers are approximately 0.5 per cent of all Covid-19 deaths, they are not over-represented. The data does not show that healthcare workers are dying at rates proportionately higher than other employed individuals or even the population as a whole. This is cautiously reassuring’.

A doctor working in an intensive care unit for Covid-19 patients appended a personal ‘reader response’ at the foot of the report, saying he was ‘surprised at the lack of commentary’ at the absence of deaths among intensivists.

He set out the extraordinary precautions he and colleagues were taking when dealing with Covid-19 patients, and concluded: ‘I am more concerned about catching coronavirus on my way to work than when I am there.’

In fact, hospitals are rife with Covid-19 infection, potentially lethal to those working there, which explains why the PPE is so essential. It seems to have worked.

The issue remains the extent to which all those ‘patient-facing’ staff in hospitals have had access to adequate protection, not just those conducting medical procedures on patients critically ill with the virus.

I would have expected the fatalities among NHS staff to be higher than the average within the working-age population, not just because they would have been travelling to work when others haven’t, but also because 16 per cent of the staff are designated BAME (black, Asian and minority ethnic) — significantly higher than the proportion in the population as a whole.

A recent survey of almost 7,000 patients suggest that black Britons have been three times more likely to become critically ill with Covid-19 and Asians twice as likely, compared to those designated ‘white’.

In this context, it is all the more remarkable that the rate of Covid-19 mortality within the NHS does not exceed that among the general population.

At the same time, the HSJ report gives a shocking insight into the vulnerability of those from black and Asian families: no fewer than 64 of the 119 deaths were those the report describes as ‘BAME individuals’, of whom ’53 were not born in the UK’.

The report is not able to determine the adequacy of the PPE supplied to these individuals, or indeed whether they contracted Covid-19 within the hospitals, rather than in their journey to work or at home — when they would not have been protected.

What are we to conclude from this (oddly unnoticed) report by the leading journal in the field? It certainly does not lessen my admiration for those who, day-to-day, work exhausting shifts to save the lives of the critically ill with this foul virus, and who endure the trauma of seeing so many of their patients die in harrowing circumstances.

But it suggests that the Government has done a reasonable job in protecting the lives of those health-workers themselves — and that Jolyon Maugham QC is an irksome litigant who should spend more time with his chickens.