DOMINIC LAWSON: We really CAN forget things we’re ashamed of

Someone once said — and it might even have been me — ‘I can remember very little, especially about the past.’ A joke, obviously: but it also makes a serious point. Our autobiographical memories are much less reliable than is commonly realised.

Unless we appreciate this point, we won’t fully understand the purely personal conflict about what did or did not take place between two students in a bedroom 36 years ago, and which, extraordinarily, has transfixed and divided not only the entire American political establishment, but television viewers across the globe.

Judge Brett Kavanaugh, enthusiastically nominated by his fellow Republican Donald Trump, was on the verge of being approved for the vacant position on the U.S. Supreme Court — a lifetime appointment of colossal influence.

But then a woman called Christine Blasey Ford emerged to claim that in the early Eighties, when they were at neighbouring and equally exclusive fee-paying single-sex colleges, the 17-year-old Kavanaugh had sexually assaulted her: she was just 15.

Last week, in scenes almost too excruciating to watch, Ford and Kavanaugh gave their diametrically opposed accounts to the Judiciary Committee of the U.S. Senate, broadcast live coast-to-coast. Each was, in effect, accusing the other of scandalously misleading the Committee — and the nation.

Kavanaugh ranted and raged that he was not the man described by Ford. While his behaviour had anything but the dignified manner one might wish from an aspirant justice of the Supreme Court, outraged innocence can manifest itself in such a fashion. His accuser, too, was tearful — especially when she recalled how the young Kavanaugh had laughed at her plight. 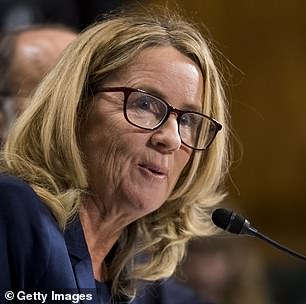 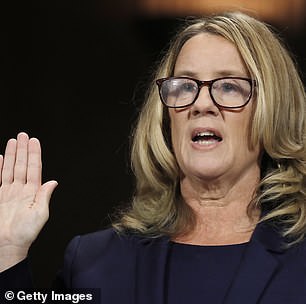 Christine Blasey Ford (pictured during the Senate Judiciary Committee hearing) claims Brett Kavanaugh sexually assaulted her when he was 17-years-old.

But she is now a distinguished professor of psychology — it’s Dr Christine Blasey Ford — and so when asked by one of the Senators how she could be ‘so sure’ that it was Kavanaugh who had assaulted her, given that she couldn’t say exactly where the assault had taken place, or how she had got to the party where it allegedly happened, Dr Ford replied: ‘It’s just basic memory functions and also just the level of norepinephrine and epinephrine in the brain . . . The neurotransmitter encodes memories in the hippocampus so that trauma-related experience is locked there, so other memories just drift.’

That was much more articulate than anything Kavanaugh provided when on the stand. The (disputed) science invoked by Dr Ford asserts that although the brain does not always store memories completely, some may be especially vivid if the brain prioritises them, or if they have a strong emotional component — the hippocampus is part of the system connected with human emotion. 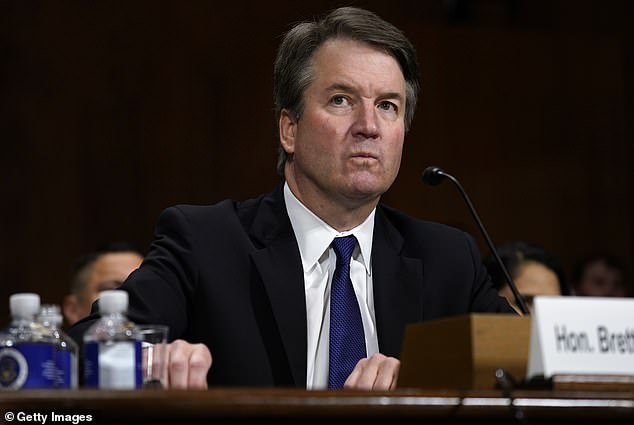 On the other hand, we know people can be fantastically compelling in accounts of assaults they say they underwent, and yet which did not happen (or not at all in the way described). Most notoriously in recent British criminal history, there is the man known as ‘Nick’ who convinced the police he had been regularly raped as a child in the Eighties by a series of MPs and military figures. It was all fantasy, but ‘Nick’ had so convinced himself, that his detailed and shocking account also suckered people whose line of work normally lends itself to scepticism.

Nor can psychiatrists distinguish between true and false memories of assault. I have this from no less than Sir Simon Wessely, past president of the Royal College of Psychiatrists, and professor of psychological medicine at King’s College London. As he put it to me: ‘That’s why we have judges and juries, and they are rightly suspicious of expert psychological evidence. We can add to the picture, but it’s really a forensic issue.’

This, in turn, is one reason rape and sexual assault cases produce a lower conviction rate than any other offence. To bring a guilty verdict, juries are required to be sure beyond reasonable doubt — and that is most difficult in cases where there is no forensic evidence and no corroborative eyewitnesses. Which can be very tough on the women who bring such complaints — as the 15-year-old Christine Blasey Ford might have discovered had she taken the matter further at the time.

It is equally obvious — perhaps more so — that people who have committed a crime can be compelling in their denials. And the reason why they can be so convincing in their claims of innocence is that they have convinced themselves. No one more succinctly described how this happens than the German philosopher Nietzsche. He wrote: ‘Memory says: “I did that”. Pride replies: “I could not have done that.” Eventually memory yields.’

I have been prey to exactly this form of self-exculpatory delusion. Some years ago, I bumped into a friend at a party, who used to write a column for the Spectator magazine under my editorship. I said to him how sorry I was that my successor as editor had terminated his column.

He stared at me with astonishment and then replied: ‘But you sacked me.’ Well, he would know. But I then checked with the Spectator archive, and, sure enough, it was indeed under my command that his column had been discontinued. I can guess how this happened. I liked this columnist, as a person, very much. It must have troubled me that I found it necessary to tell him that his column wasn’t working and would have to end. So I found it easier, first to forget this had ever happened, and, later, to convince myself that someone else had been responsible for his disappointment.

None of this would have been consciously planned. It’s just the way we erase knowledge — memories, indeed — that we find difficult to live with. This obliteration of unpleasant events can take remarkable forms. As Sir Simon Wessely told me: ‘People can forget things you might not think possible. For example, studies linked to medical records show that some people forget they had cancer.’

That is an extreme version. But in none of us does memory function like a video camera. As one leading researcher in neuroscience has observed: ‘What’s stored in memory is never a one-to-one copy of what really happened in the world. The way our brains are built influences what we perceive, and what is perceived biases what is memorised. 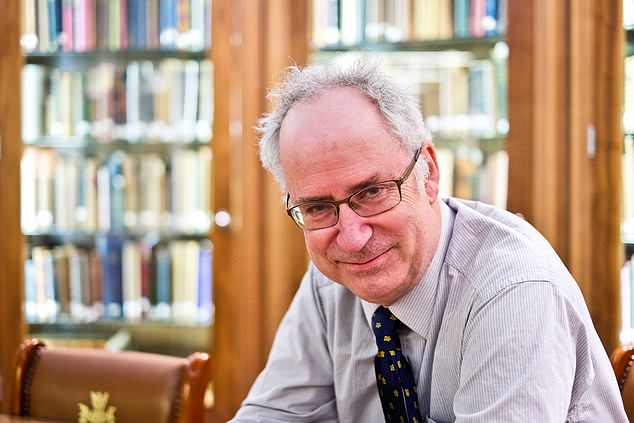 ‘One can recall events from memory, but the episodes reconstructed in this way never precisely mirror what happened when the content of the memory was stored. That’s because these contents are not being saved into a safe deposit box or a hard drive, but into a network of nerve cells that are constantly at change.’

Christine Ford and Brett Kavanaugh’s hearing is a moment in history – and has its own rules.

Christine Ford testifies first, followed by Brett Kavanaugh. They are not expected to be in the same room together at any time.

Each hearing follows this format:

Which brings us back to Judge Kavanaugh. In his college days he was, by the accounts of contemporaries, a prodigious drinker — a member of a club whose motto was ‘100 kegs or bust’. A memoir by a former friend of his, a member of the same club, describes a person named ‘Bart O’Kavanaugh’ as having ‘puked in someone’s car the other night’ and ‘passed out on his way back from a party’. A former classmate of Kavanaugh confirmed he had the nick-name ‘Bart’.

These are not the sorts of memories that a judge — and especially one aspiring to the highest legal authority — will readily assimilate with his sense of self-esteem or standing in society.

In his Senate hearing, Kavanaugh was asked if he had ever experienced alcohol-derived memory blackouts when at college. Unwisely, given that his questioner was a demure woman, he snapped back: ‘Did you, Senator?’ He then denied that he had. Instead, he tearfully portrayed his teenage self as a ferociously hard-working sexual innocent. Which is doubtless what he now believes, genuinely outraged at any suggestion to the contrary.

It would have been better for him if he had said: ‘Yes, I drank to excess when I was at college. I might have done stupid things as a result. I cannot remember Dr Blasey Ford, let alone assaulting her. But if I did, that is appalling. I apologise to her and seek her forgiveness.’

Instead, I suspect, he has so convinced himself of his own perpetual rectitude that this was impossible. Like all of us, he has made his memory the slave of his will. But in his case the whole world can see the consequences.