DOMINIC LAWSON: Why do those who condemn Rwanda plan ignore EU’s callous scheme for Libyan migrants?

Apparently, Priti Patel has taken a leaf out of Adolf Eichmann’s book. Or that is what some civil servants working for her seem to be saying.

The Home Secretary’s plan to redirect to Rwanda those travelling here from France in dodgy vessels organised by criminal people-smuggling gangs has evoked comments on an internal civil service noticeboard such as: ‘The words ‘I was only obeying orders’ are echoing down through history to me and making me queasy.’

This, of course, was a reference to the stock defence of Nazis charged at the Nuremberg War Crimes trials for their part in the attempt to rid Europe of its Jewish population (which ultimately led to the murder of six million men, women and children).

But it is not just anonymous and, for all we know, very junior civil servants who are making such comparisons.

One of our most distinguished historians of Nazi Germany, Sir Richard Evans, has also done so.

Via Twitter, Sir Richard declared that ‘the UK Government scheme to deport asylum seekers to a tropical part of Africa irresistibly reminds [me] of the failed Nazi scheme to deport Jews to Madagascar’.

The Nazi government’s so-called Madagascar Plan had been the proposal of the SS officer in charge of ‘Jewish affairs’, Adolf Eichmann, who, having evaded justice at Nuremberg was ultimately captured in Argentina by the Israelis and hanged after a trial in Jerusalem.

First revealed in 1940, before the Nazis embarked on ‘the Final Solution’, the Madagascar Plan involved shipping out the Jews of Europe to that island off the East coast of Africa.

But, as Sir Richard well knows, this would have involved Madagascar — then a colony of France — coming under Nazi control, to be run by the SS.

And as a modern German historian of the period, Peter Longerich, has written, the idea was partly that the Jews sent there would not survive such conditions.

What’s more, the plan was to be financed by the confiscation of property and other assets owned by the Jews.

Finally, although this too is not a difference which appears to concern Sir Richard, the Madagascar plan involved the expulsion of Jewish families who had been in Europe for centuries.

It may be relevant that Evans is very much on the other side of the political spectrum from the Conservatives (and no reason why he shouldn’t be).

Thus, after the Chief Rabbi in November 2019 declared that the anti-Semitism then festering within Jeremy Corbyn’s Labour meant that ‘the overwhelming majority of British Jews are gripped by anxiety’ at the prospect of a Labour victory at the forthcoming general election, Sir Richard tweeted that he would still cast his own vote for Labour, even though he accepted it was ‘infected with the cancer of anti-Semitism’. 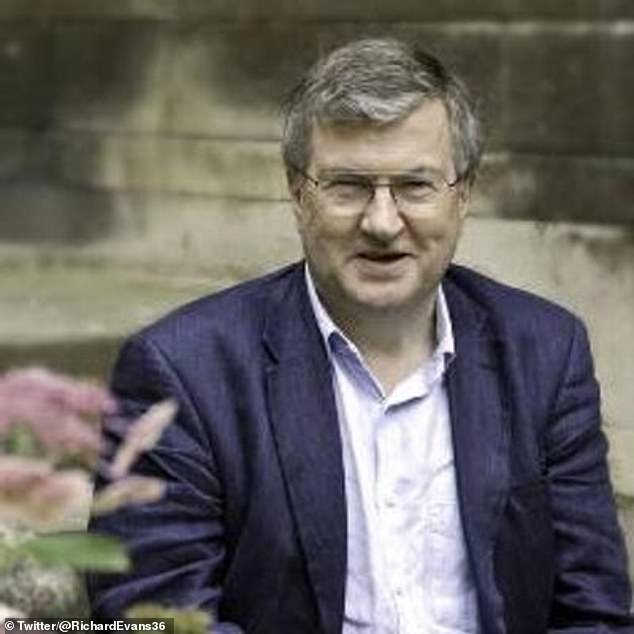 Nazi Germany historian, Sir Richard Evans, pictured, said on Twitter, that ‘the UK Government scheme to deport asylum seekers to a tropical part of Africa irresistibly reminds [me] of the failed Nazi scheme to deport Jews to Madagascar’

He said that he would do so ‘with a heavy heart’, and hoped that if Labour lost, Corbyn would be replaced by someone who would deal with this, and, he added, be ‘a Remainer’.

It was in the context of his contempt for Brexit (again, a view which he is perfectly entitled to propagate) that Sir Richard wrote an article a few years ago, entitled How The Brexiteers Broke History, condemning the way in which some Conservatives, including Boris Johnson, drew comparisons between the EU ‘and Hitler’s 3rd Reich’.

Perhaps, then, Sir Richard should not use similar tactics when criticising Mr Johnson’s policies.

Especially so, as it is the EU, and not the UK, which has incurred the greatest wrath of human rights organisations for its own policies towards those being smuggled across the seas into its territory.

The EU has for years been funding and assisting the interception of boats carrying would-be migrants from Libya, and returning them to detention centres in that country.

A formal deal to this effect between the EU and Libya was struck in 2017, and since then more than 82,000 refugees have been intercepted at sea and turned around in this way.

In January this year, marking the fifth anniversary of this agreement, Amnesty International issued the following statement: ‘EU leaders’ co-operation with Libyan authorities is keeping desperate people trapped in unimaginable horrors within Libya. Over the past five years, the EU has helped capture tens of thousands of women, men and children at sea, many of whom ended up in horrific detention centres rife with torture, while countless others were forcibly disappeared.’

Amnesty pointed out that this scheme was ‘overwhelmingly funded by the EU’, even though it was illegal under maritime and human rights law ‘to return anyone to a place where they face serious abuse’.

António Guterres, the SecretaryGeneral of the United Nations, no less, also marked the 5th anniversary of this policy by declaring his ‘grave concern’ at the human rights violations involved, and observed that ‘Libya is not a safe port of disembarkation for refugees and migrants’.

He called, once again, for the EU to ‘re-examine policies that support interception at sea and return of refugees and migrants to Libya’.

What of Rwanda, the country to which the British Government has said it will relocate many of those (overwhelmingly male adults) who have come across the Channel in dinghies?

By contrast, the United Nations has nothing but positive things to say about the role of that particular African country.

Last year, the UN High Commissioner for Refugees, Filippo Grandi, praised the government of Rwanda, specifically for the way it had provided a safe haven for refugees from …Libya: ‘Thanks to Rwanda, we can evacuate refugees from Libya and seek solutions for them. Many of them have suffered terrible abuse … in Libyan detention centres.’ 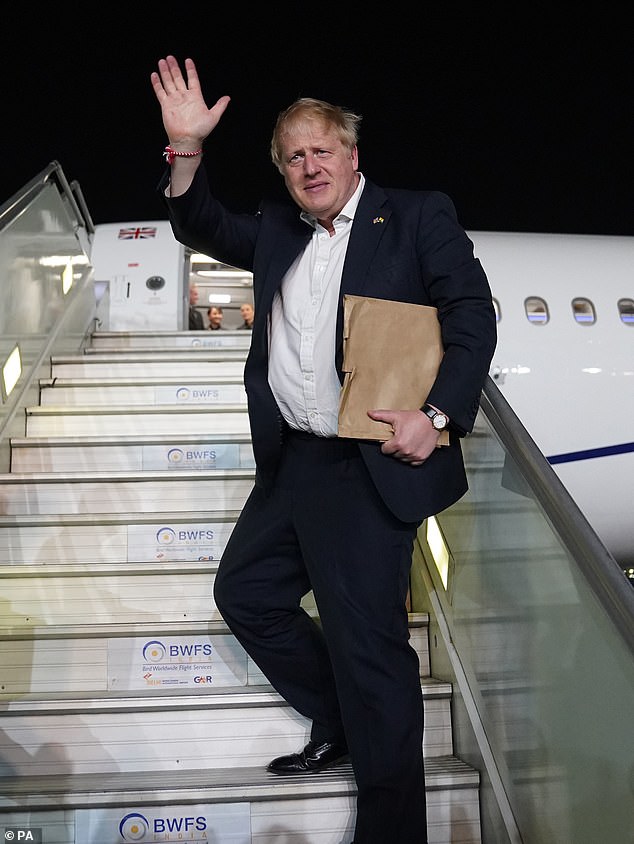 Sir Richard also wrote an article a few years ago, entitled How The Brexiteers Broke History, condemning the way in which some Conservatives, including Boris Johnson, pictured on Friday heading to India, drew comparisons between the EU ‘and Hitler’s 3rd Reich’

That is: the very detention centres to which the EU have been involved in returning tens of thousands of refugees.

This didn’t stop the MEP and former prime minister of Belgium, Guy Verhofstadt, attacking the UK Government last week for its plan, as he put it, to ‘send desperate refugees to Rwanda’.

He added: ‘Britain is a warning to European countries of where populist Governments lead to.’

While there are legitimate concerns about the way in which the Rwandan president, Paul Kagame, has dealt with his internal political opponents, the fact remains that the UN Refugee Agency has recommended his country as ‘a safe haven for refugees fleeing conflict and persecution’.

I wonder if the Archbishop of Canterbury, Justin Welby, who a week ago in his Easter Sermon denounced the Government’s Rwanda scheme as ‘ungodly’, is aware of this.

Obviously, ending up in Rwanda is very much against the wishes of those who pay thousands of euros to people smugglers to get them into the UK.

But given that the former head of the UK Border Force, Tony Smith, last week told the Mail that there would be a quadrupling of the numbers of migrants, to ‘over 100,000’, arriving by boats alone this year unless radical action was taken, it is clear why the Government hopes the deterrent effect of the Rwanda scheme will wreck the increasingly lucrative business model of the people smugglers.

The early signs are that it might have that effect, at least to judge from the Mail’s report from Calais last week.

One 34-year-old, Hamid Karimi, may have been speaking for many when he said: ‘I’m not going to the UK if afterwards I’m sent to Rwanda. I’m staying here.’

Another 34-year-old, Mohammed Noor, said: ‘We came from Africa — we don’t want to go back.’

A similar report was published in the Guardian, which quoted someone who had arrived in Kent in a dinghy from France: ‘Africa is Africa — there is no freedom there. Here in Europe, you are free.’

Although the Guardian’s reporter did not make this point, those remarks by her interviewee underscore the argument made in this column last week: that the people coming here in those flimsy vessels had already found safety in France, a country which is no less civilised than our own.

And, unlike us, it is in the European Union, which Sir Richard Evans regards as a civilising force in itself. But when it comes to the treatment of migrants on the high seas, we have no cause to take moral lessons from that direction.