The climate change protestor who blocked the Sydney Harbour Bridge will serve at least eight months in jail for disrupting peak hour traffic – a sentence NSW Premier Dominic Perrottet on Monday described as ‘pleasing to see’.

Environmental protester Deanna ‘Violet’ Coco was sentenced to 15 months behind bars on Friday and will have to serve a minimum non-parole period of eight months after she used a van to block a lane on the Harbour Bridge, triggering commuter chaos in April.

Human rights advocates called the sentence ‘unbelievable’ and said individuals should not be criminalised or imprisoned for peaceful protesting.

However Premier Dominic Perrottet defended the punishment as ‘not excessive’ on Monday and said he hoped the sentence would deter protesters from actions that ‘inconvenienced people’.

‘If protesters want to put our way of life at risk, then they should have the book thrown at them and that’s pleasing to see,’ Mr Perrottet said.

‘We want people to be able to protest but do it in a way that doesn’t inconvenience people right across NSW.

‘My view is that those protests literally started to grind our city to a halt. The clear message here, and it is a clear lesson – everyone has the right to protest, but do so in a way that doesn’t inconvenience people.’

During a press conference at Coogee Public School, NSW Premier Dominic Perrottet (pictured) said he was ‘pleased to see’ climate activist Deanna Coco was sentenced to a minimum of eight months in jail 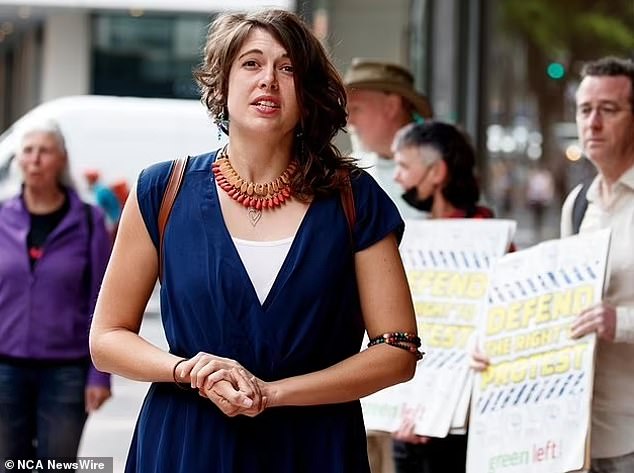 Environmental protester Deanna ‘Violet’ Coco (pictured) was sentenced to 15 months behind bars, with a minimum non-parole period of eight months, after she used a van to block a lane on the Sydney Harbour Bridge during peak hour traffic in April

The premier’s comments drew a mixed reaction from people on social media – with  former Bachelor host Osher Gunsberg warning Mr Perrottet was on a ‘slippery slope’.

‘Protest is vital in a democracy, and considering what’s at stake, the level of protest was probably not even close to an appropriate response. It is a slippery slope from here, sir,’ the TV presenter wrote on Twitter.

‘The nerve to claim it’s people like Violet putting “our way of life at risk”. If that’s who you want to jail Premier, you’ll have to start arresting fossil fuel executives.’

Coco was one of four protesters from the activist group Fireproof Australia, who blocked lanes on the Harbour Bridge in April. 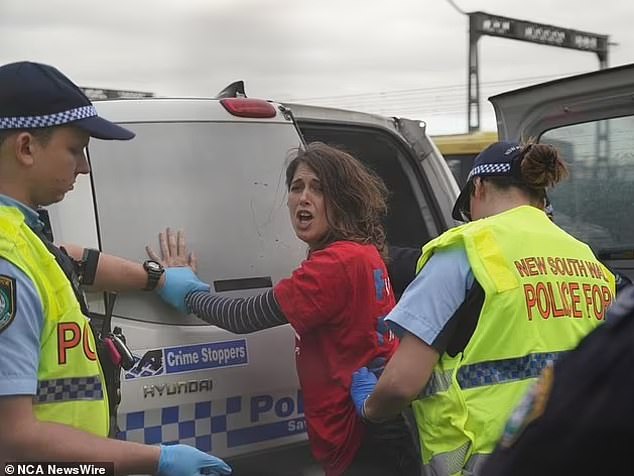 Coco was one of four protesters from the activist group Fireproof Australia who blocked lanes on the Harbour Bridge (pictured). She pleaded guilty but is appealing her sentence

The 31-year-old climbed onto the roof of the hired van and set off a flare while the three other protesters held banners and glued themselves to the road.

Coco pleaded guilty to seven charges and was fined $2,500 but is appealing her sentence and will face court in March 2023.

The move – which is being challenged in the Supreme Court – could see non-violent protesters jailed for up to two years and given larger fines.

Mr Perrottet made the comments about Coco during a press conference at Coogee Public School, where he launched a new syllabus for students across the state.

However the premier was without a signature part of his typical look – his usual clear framed glasses.

Reporters questioned the Liberal leader’s ‘new look’, with Mr Perrottet confessing he did not have a pre-election makeover but had accidentally reversed over his glasses.

Mr Perrottet later took to Twitter to show the crushed pair of glasses and admitted to reporters he was off to the optometrist to get a new pair. 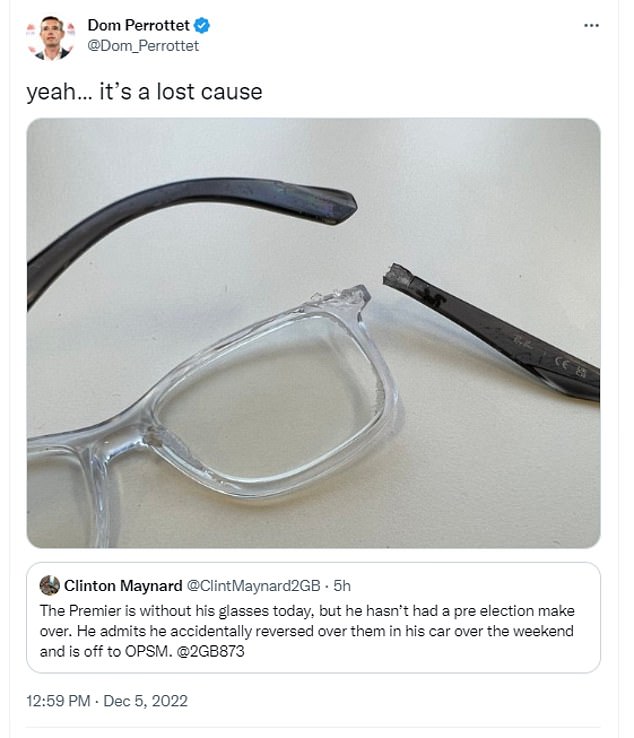