Dominic Raab today dismissed fears that Boris Johnson and Joe Biden will not get along as he said the US presidential election result is ‘beyond reasonable doubt’.

The Foreign Secretary said he is ‘very confident’ there is a ‘huge bedrock of underlying interests and values that bind us very closely together’.

And he insisted Mr Biden will have ‘no greater ally and no more dependable friend than the United Kingdom’.

But Democratic sources and advisers have warned Mr Johnson could struggle to strike a strong relationship with Mr Biden because of past controversial comments he made about Barack Obama and because of his alliance with Donald Trump.

Mr Raab rejected claims made in the US that Mr Johnson is not an ‘ally’ of Mr Biden as he said ‘you can always pick a snippet’ to paint a negative picture.

He also became the first member of the UK Government to say that all votes should be counted in a democratic election after Mr Trump called for counting to be stopped.

Number 10 repeatedly refused to be drawn on the issue on Friday as the Government tried to stay impartial over Mr Trump’s unsubstantiated claims of election fraud.

It came after it was reported that Mr Johnson had joked with aides on Friday that Mr Biden is ‘one of the few world leaders I haven’t insulted’.

Number 10 is now busy preparing for the first phone call between Mr Johnson and the President-elect, with Mr Raab predicting it will take place ‘shortly, in due course’. 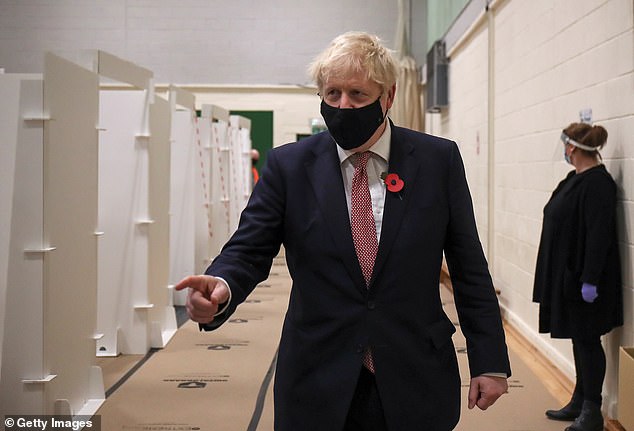 Mr Raab was asked this morning if the election of Mr Biden is ‘good news’ for the UK and he told Sophy Ridge on Sky News: ‘We are excited by the opportunities for working with the new administration.

‘The contours adjust, the opportunities and the risks adjust when there are changes in the White House.

‘But I am very confident, from climate change to cooperation on coronavirus to counter terrorism, there is a huge bedrock of underlying interests and values that bind us very closely together.

‘When we look at what Joe Biden has talked about doing in foreign policy he will have no greater ally and no more dependable friend than the United Kingdom.’

Democratic sources suggested Mr Johnson could be in for a frosty first phone call with Mr Biden, telling the Sunday Times: ‘They do not think Boris Johnson is an ally.

‘They think Britain is an ally. But there will be no special relationship with Boris Johnson.’

Former vice president Mr Biden is said to still be angry at Mr Johnson over remarks he made in 2016 about Mr Obama.

The then-Mayor of London had lashed out at Mr Obama for urging British voters to back staying in the EU and criticised the then-President for removing a bust of Sir Winston Churchill from the Oval Office.

He suggested Mr Obama got rid of the statue because it was a ‘symbol of the part-Kenyan President’s ancestral dislike of the British empire’.

The comments prompted a furious backlash at the time and Mr Biden is said to still harbour resentment.

The new Vice President-elect, Kamala Harris, is also reportedly not a fan of Mr Johnson with a US politician who is likely to be given a role in the new administration recently telling friends: ‘If you think Joe hates him, you should hear Kamala.’

Mr Raab dismissed fears of the two men having a bad relationship as he said: ‘You can always pick a snippet from the newspapers, or from activists around the campaign.

‘What I know from talking to the leaders I have spoken to is that we are going to have a very strong relationship and there is just so much that we can cooperate on and so much of what President-elect Biden has been talking about.’

Tory former chancellor Sajid Javid today insisted Mr Johnson’s past comments and alliance with Mr Trump will not have any impact on the Special Relationship which he argued is ‘far bigger than personalities’.

He said the extent of the PM’s relationship with Mr Trump had been ‘completely overstated’ and the pair simply had a ‘good, strong working relationship’.

Mr Javid told Sky News he believed Mr Johnson and Mr Biden will ‘hit it off straight away’.

Mr Trump has made clear he intends to contest the result of the election but Mr Raab said this morning it is ‘now very clear’ Mr Biden has won.

The Foreign Secretary said: ‘The reality is we want to respect the integrity of the processes in place. It is not for us to start adjudicating on the appeals, the legal claims, the counter claims.

‘But what we have said, the result is now very clear, it is beyond reasonable doubt in my view and we welcome the new administration.’

Downing Street faced intense criticism last week after the Prime Minister’s Deputy Official Spokesman refused to say that all votes should be counted in democratic elections.

When asked the question today, Mr Raab initially tried to dodge the issue before conceding: ‘In principle, yes of course.’

When asked why the Government could not say that last week, Mr Raab told Sophy Ridge: ‘Because what you are really trying to do Sophy is drag me into the legal claims about whether all the votes have properly been counted when you look at the mail votes, the votes in person, and the claims that have been made for example about the posted military ballots. 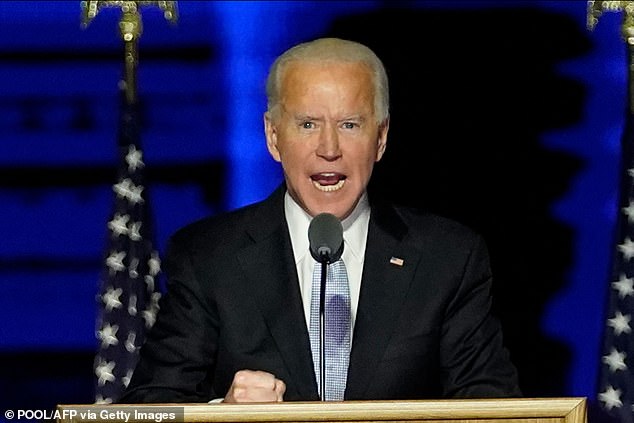 ‘I just don’t want to get sucked into that.’

Mr Johnson yesterday congratulated Mr Biden after he was called as the winner in the crucial battleground states of Pennsylvania and Nevada, giving him an insurmountable lead over Mr Trump.

The Prime Minister tweeted: ‘Congratulations to Joe Biden on his election as President of the United States and to Kamala Harris on her historic achievement.

‘The US is our most important ally and I look forward to working closely together on our shared priorities, from climate change to trade and security.’

Mr Johnson is said to have joked to aides on Friday: ‘Joe Biden is one of the few world leaders I haven’t insulted.’

The PM will be hoping to strike a close relationship with the new President and Number 10 wants to use the first phone call between the two men to lay the groundwork.

It is thought Mr Johnson will emphasise the need for the two nations to work together to combat climate change ahead of the UK hosting a UN climate summit next year.