The pictures of Dominic West and Lily James’s intimate al-fresco lunch in Rome caused a stir – and left his ten-year marriage hanging in the balance.

Now more photos have turned up that the actor’s wife may find equally difficult to digest.

The Daily Mail has uncovered a magazine spread from four years ago which shows the pair savouring an uproarious long lunch.

Flirty: The Daily Mail has uncovered a magazine spread from four years ago which shows Dominic West and Lily James savouring an uproarious long lunch

Dressed to the nines, they drink champagne, devour oysters and joke around with the silverware, and then West serenades Miss James as she poses languidly on top of a grand piano.

Last month West, 51, and Miss James, 31, travelled to the Italian capital for a rumoured two-night stay at the Hotel De La Ville.

As well as meeting their mutual acting agent, they were spotted sharing a scooter ride and in a clinch over lunch.

After they returned to the UK, West’s wife Catherine FitzGerald insisted ‘we’re very much still together’, and the couple shared a kiss for the world’s media outside their home in Chippenham, Wiltshire. 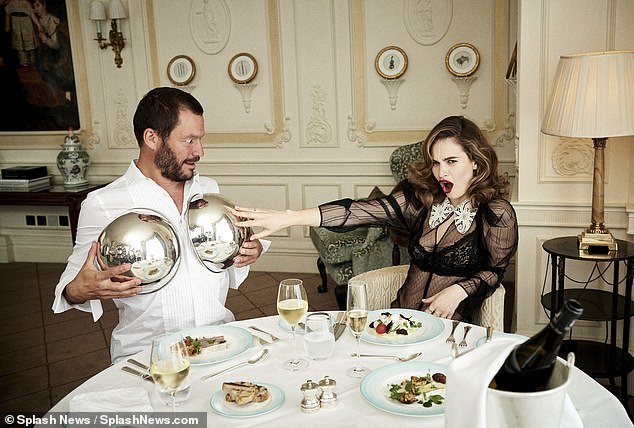 Jokers: Dressed to the nines, the pair drink champagne, devour oysters and joke around with the silverware 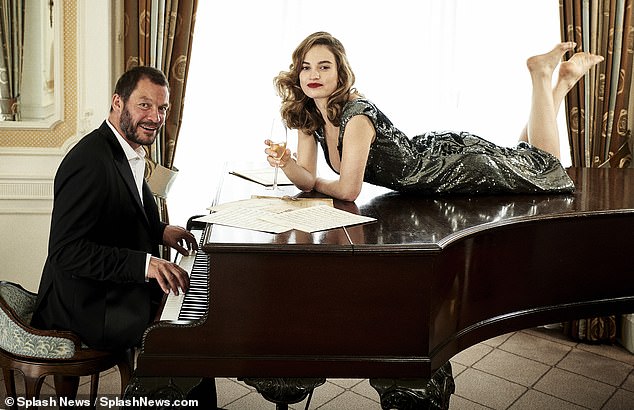 Elegant: Dominic played the keys while Lily sipped on champagne 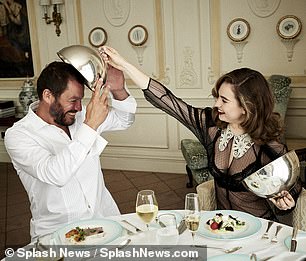 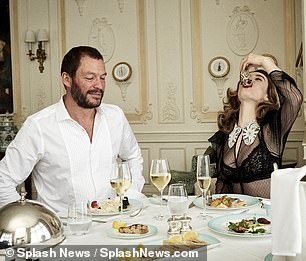 Fun times: The duo played around with silverware during their boozy lunch 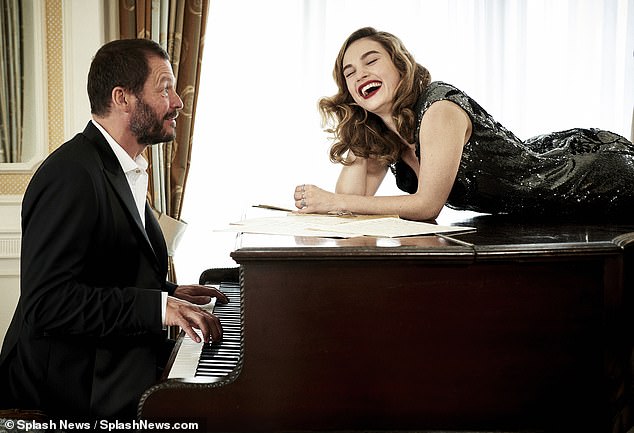 Lost in laughter: Lily couldn’t hide her joy as she laughed while Dominic played the piano

But reports have since emerged that the marriage is ‘as good as over’, even though the couple were spotted out jogging earlier this month.

Settling down to the meal at Claridge’s in Mayfair for the 2016 shoot, Miss James confessed: ‘I’ve been waiting five years for a date with Dominic.’

She had met West when they starred in a stage production of Othello in 2011, and Luncheon magazine, a biannual cultural title, brought them together again for a regular feature in which two celebrities shoot the breeze over a meal.

At the time, Miss James was regarded as one of the most promising acting stars, following starring roles in the BBC’s adaptation of War And Peace and the live-action version of Disney’s Cinderella.

She was two years into a relationship with Doctor Who star Matt Smith. 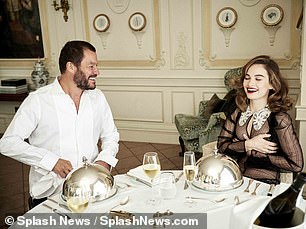 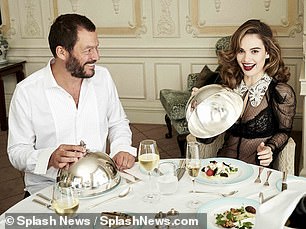 Covering: Lily held onto her bosom over her sheer black blouse as the duo shared a laugh 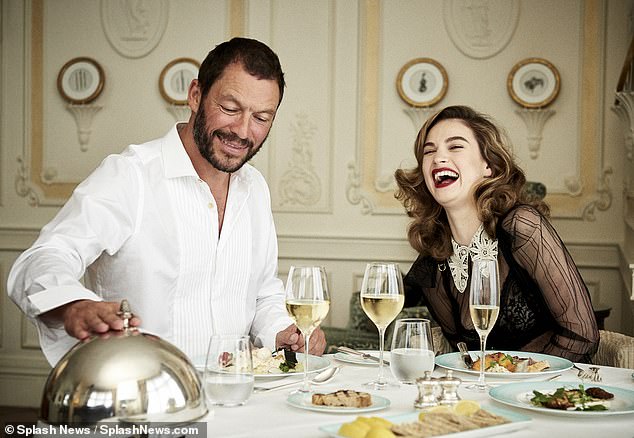 In stitches: Lily laughed as Dominic shared a joke at the table over lunch 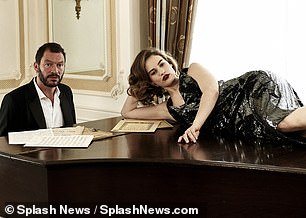 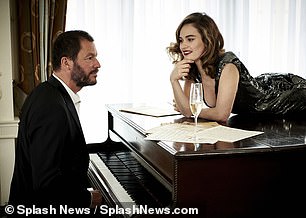 Sophisticated: The co-stars looked extremely sophisticated in the opulent setting of Claridges

A delivery driver has claimed that Dominic West confessed to him that he had an affair.

Matt Vessey, 36, was delivering a lawnmower to the home the actor shares with his landscape gardener wife when he was met by a wall of photographers.

The delivery driver said he asked West about the media presence at the rural property.

Mr Vessey told MailOnline: ‘I am like, ‘What the hell is going on?’. He said, ‘It is a bit serious … I have had an affair’.’ One of West’s best-known roles is unfaithful author Noah Solloway in HBO drama The Affair.

Mr Vessey added: ‘I said to him, ‘Mate, I haven’t got a clue who you are’. All I had on my driver’s receipt was the name ‘Dominic’.’

The driver from Scunthorpe later called his father to ask why West had been in the news. He also said the actor had apologised to him for the press intrusion in his day.

Meanwhile West was riding high on the global success of HBO’s award-winning series The Affair, which was then gearing up for its third season.

And he had been married six years to his aristocratic landscape gardener wife, with whom he has four children.

Miss James wore a sheer Erdem dress, before changing into a sequined gown, while West was dressed in a Paul Smith tuxedo.

A shoot source said: ‘The atmosphere was great. They were constantly laughing and joking around and seemed to get on really well. 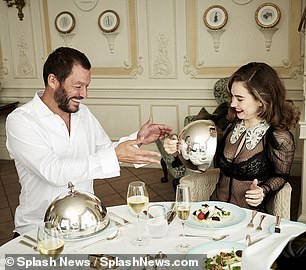 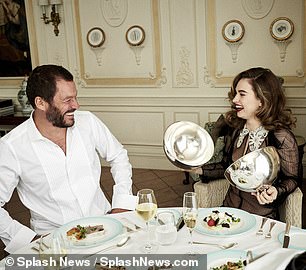 Hilarious: The duo barely stopped laughing as they joked around with the silver covers to their meals 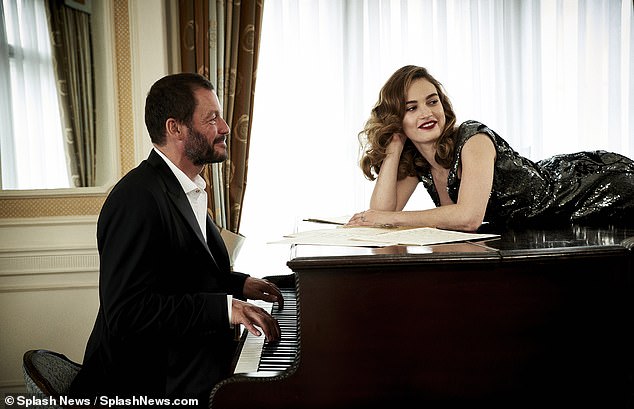 Glamorous: Lily looked every in a leading lady as she reclined on the piano in her shimmering frock

‘You wouldn’t have known it was five years since they had seen one another – they seemed like close friends.’

The feature reveals they chatted about a trip West was due to make with the BBC to the Himalayas. Referring to paragliding, the actress said: ‘You said you were going to jump off a holy mountain?’

‘Yes, it’s a mountain in the Himalayas and there is a holy man who lives there,’ West replied. Miss James said ‘that’s cool’, before asking: ‘Can I come?’

West joked: ‘Yes, that was our idea because the BBC wouldn’t have us, so they said, ‘How about Lily James?’ 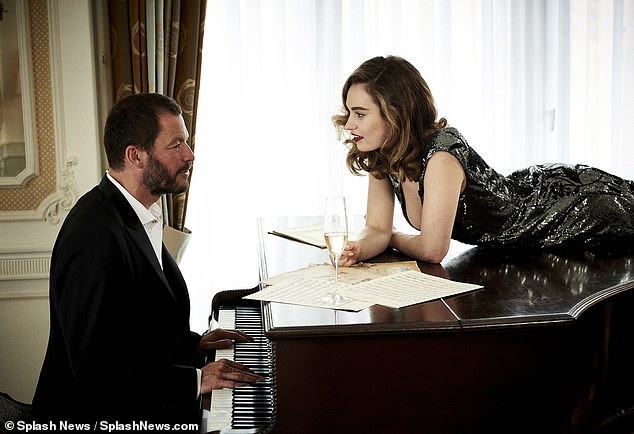 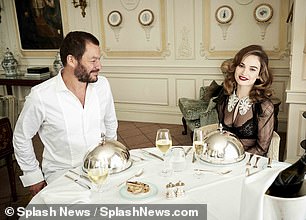 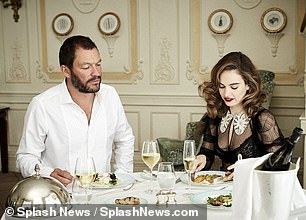 Lunch time: Aware the cameras were capturing their lunch, the duo smiled as they tucked into their meals 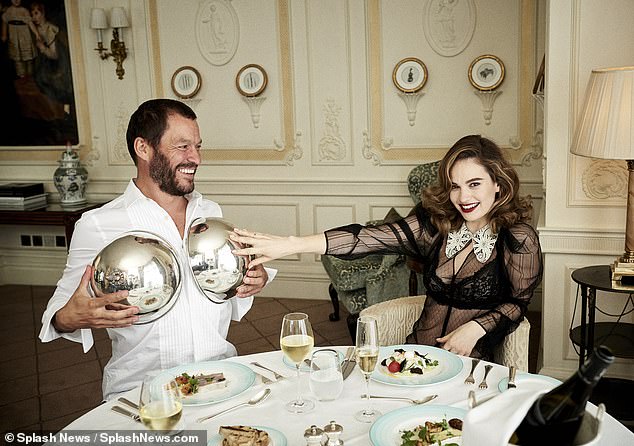 Stunning: Lily looked sensational in a sheer black blouse which left her lace bra on display

The actress said she would ‘do it over any job opportunity’ but might ‘ruin the vibe.’

‘Of course you wouldn’t ruin the vibe,’ said West, to which Miss James replied: ‘I might, if I wear this Erdem dress while jumping off.’ She later suggested their agent could join them on the trip.

Before the Rome incident, West and Miss James had been filming the BBC’s forthcoming adaptation of Nancy Mitford’s The Pursuit Of Love, in which he plays her father.

The actress, who is single, has refused to comment on her relationship with West.

Last week, Dominic wife Catherine FitzGerald, 49, spoke out for the first time since the actor was photographed kissing and cuddling Lily James in Rome last month.

Catherine broke her silence to assure MailOnline that her marriage is ‘fine’, as friends confirmed she was determined to make her marriage work and avoid a divorce. 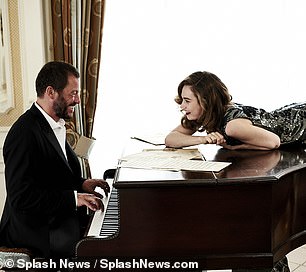 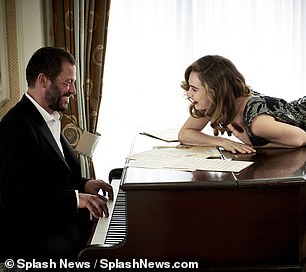 Glamorous: Dominic looked handsome in a sleek black suit and open collar white shirt while Lily dazzled in her frock

She told a reporter: ‘We’re fine, thank you very much, yes we are. Things are OK between us. We don’t need any advice from anyone, thank you.’

Her confident tone was a far cry from her humiliation last month when photos emerged of her husband canoodling with young actress Lily, without his wedding ring during a romantic break in Rome.

In the days following the scandal, mother-of-four Catherine stood by silently during a bizarre show of unity with the star outside their Cotswolds home, as West insisted: ‘Our marriage is strong and we’re very much still together.’

Despite her aristocratic stiff upper lip, she came under pressure from friends to end her ten-year marriage to the man with whom she has four young children, with some saying she had grown tired of being an actor’s wife ‘and everything that entails’. 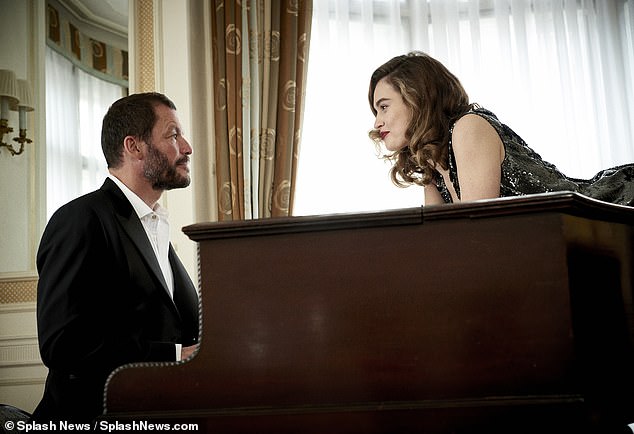 That look: The pair stared into each other’s eyes during the photoshoot ain the Prince Alexander Suite at Claridges

But sources close to the couple have since said that they are determined to save their marriage and are ‘working through their problems’, confident that their relationship will survive.

A close friend of Catherine’s revealed: ‘Yes, Catherine was devastated and humiliated by the pictures of Dom with Lily. And it’s well documented and clear what his views on infidelity are.

‘It may surprise a lot of people but that doesn’t mean their marriage is close to ending. They have had some difficult discussions but are still very much together. They’ve got a lovely family and she wants to do everything she can to keep it together.’

Another friend said: ‘Even if she wanted to, it’s not that easy for Catherine to walk away from the marriage because she’s locked into it in many ways.

‘They’ve got four young children and Dominic is also the main breadwinner. And there’s also the considerable financial investment in Glin Castle to consider.’

A friend also told MailOnline that she had spoken with Catherine since her return from Ireland, and she confided that she also wanted her marriage to survive because she does not want to go through a second divorce.

Catherine married Edward Lambton in 1995, becoming Viscountess Lambton for a time, until their divorce in 2002.

The friend added: ‘The divorce left some deep emotional scars on Catherine and she doesn’t want to go through another painful break up. The experience left her feeling very crushed and it took a long time for her to get over it.

‘She wants to avoid another divorce at all costs.’

West and Catherine married in June 2010 after reuniting following their university romance and have four children together; Dora, 13, Senan, 12, Francis, 11, and Christabel, seven.

It was previously reported that landscape designer Catherine was preparing to end their relationship as the screen star, is said to have admitted to having feelings for Lily.

The claims came just weeks after Dominic and his long-term partner staged a photo opportunity outside their Wiltshire home and told reporters: ‘Our marriage is strong and we’re very much still together.’

A source told The Sun: ‘Catherine has told those closest to her that Dominic has admitted having feelings for Lily.

‘At first it seemed as though the whole thing was just a one-off but Catherine has since said it’s become obvious it was more than that. Catherine feels crushed by it, naturally. It’s a huge thing to be coming to terms with.

‘She has since told the people closest to her their marriage is as good as over now and she doesn’t think there is a way past this.’

MailOnline contacted representatives for Dominic and Lily for further comment at the time.