Domino’s sells hundreds of pizzas to raise money for a devastated family who lost $40,000 after they were swindled by a builder

Domino’s has sold hundreds of pizzas to raise money for a devastated family who were duped by a builder and lost $40,000.

Shanon and Liza Casson were looking to downsize their property in Whanganui, New Zealand but were left devastated after a builder stole $40,000 from them.

‘We started the design and paid for the plans then proceeded to sign the contract  and place our $40,000 deposit,’ Mr Casson told Daily Mail Australia.

‘We were expecting our baby so it was going to be built just before our due date but after many broken promises and no contact we got worried.

‘After some serious searching on the internet we found he was on the NZ companies list and was not allowed to own or direct a company at all.’

The Cassons said they paid the builder $40,000 to start work on a ‘tiny house’ for the family, but they were ripped off when no work was done.

The builder has since been arrested and faces dishonesty charges, but they do not relate to his alleged theft of $40,000 from the Casson family.

Mr Casson said the community had been fantastic in offering support since they lost their money.

‘The public have been phenomenal with offers of free housing to fundraisers donations,’ an overwhelmed Mr Casson told Daily Mail Australia.

‘And of course Domino’s Pizza Dough Raiser which donated $1 of every pizza they sold on the Wednesday night to us.

‘We didn’t know the owners but their generosity was overwhelming.’

A Domino’s spokesperson told Daily Mail Australia that the company enjoys helping their local community to a great cause.

‘At Domino’s we have a focus on helping our local communities. In this instance Neeraj Vishwakarma, our Whanganui franchisee, wanted to help this local family after reading about their plight in the media,’ they said. 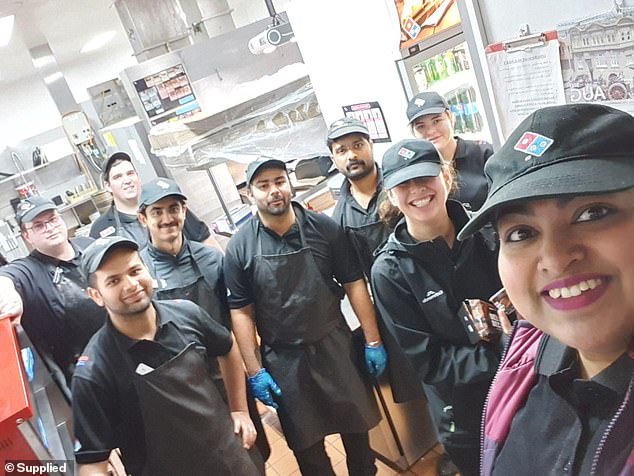 ‘We didn’t know the owners but their generosity was overwhelming,’ Mr Casson told Daily Mail Australia

‘The dough raiser saw the Whanganui community come together. The family were so grateful for all the money raised and it showed them that there are wonderful people out there.

‘The family themselves were at the Domino’s store during the dough raiser so locals could meet them and see who they were supporting. It made for a very busy night with nearly 600 pizzas sold.

‘The family were so grateful when they received the money.

‘Overall it was a fantastic experience for everyone. The team felt great raising money for a good cause and our customers got to support one of their own.’