Kathy Griffin and Don Cheadle have engaged in an all-out Twitter war after the comedian accused the actor of failing to support her in the aftermath of the controversial photo in which she held up a severed Donald Trump head last May.

Cheadle tweeted a photo of a hat with the logo for the Sleeping Giants campaign, which fights to end bigotry and sexism in America, in the early hours of Tuesday – drawing strong criticism from Griffin.

‘I will never forgive you for your nasty tweet the day my smear campaign started,’ Griffin tweeted at Cheadle.

‘You know it was a f**king smear campaign and you have never taken a moment to apologize. Some liberal you are. Yes, my memory is long my ex friend. Shame on you. I kept a list. Fear me.’

Cheadle initially responded: ‘Huh?’ – but the spat was far from over. 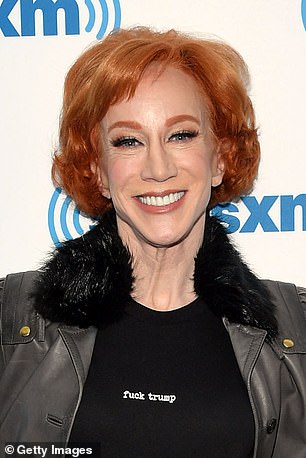 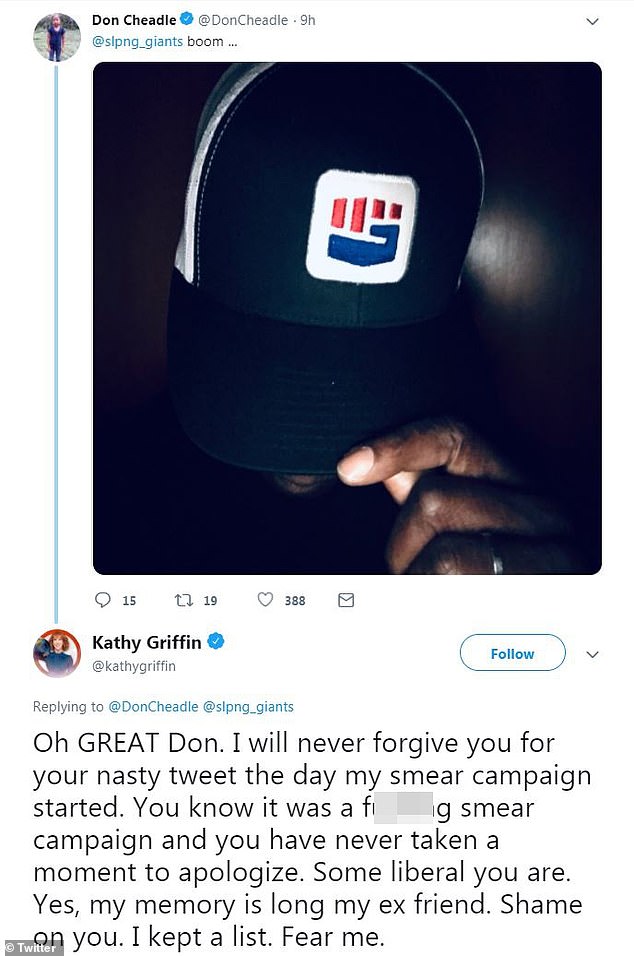 The spat began early Tuesday when Griffin responded to Cheadle’s photo of a hat with a logo for the Sleeping Giants campaign, which fights to end bigotry and sexism in America 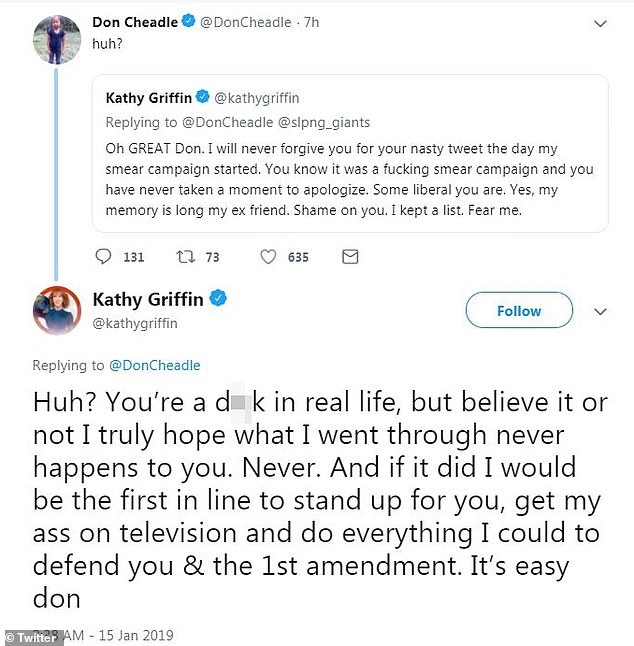 Cheadle initially only replied ‘Huh?’ before Griffin launched into a multi-tweet tirade

Emmy-winning TV personality Griffin was fired by CNN as a co-host of its New Year’s Eve broadcast and lost several other gigs in the wake of public outcry over the photo of her holding a bloodied Donald Trump head.

She now claims that Cheadle was among those who attacked her in response, citing a tweet from May 30, 2017, in which the Iron Man 2 actor defended her against a troll who accused her of voting for Trump.

Cheadle wrote: ‘She didn’t. She hates him. That pic though’ – hinting, as many others did, that the graphic photo went too far.

Responding to the ‘huh’ tweet, Griffin wrote: ‘You. Of all people. Just another Hollywood movie star phony. You really had a problem with my photo? U don’t know a smear campaign from the oval office, the tabloids, the actual news, two federal investigations?

‘…You’re a d**k in real life, but believe it or not I truly hope what I went through never happens to you. Never. And if it did I would be the first in line to stand up for you, get my a** on television and do everything I could to defend you and the 1st Amendment. It’s easy, Don.’ 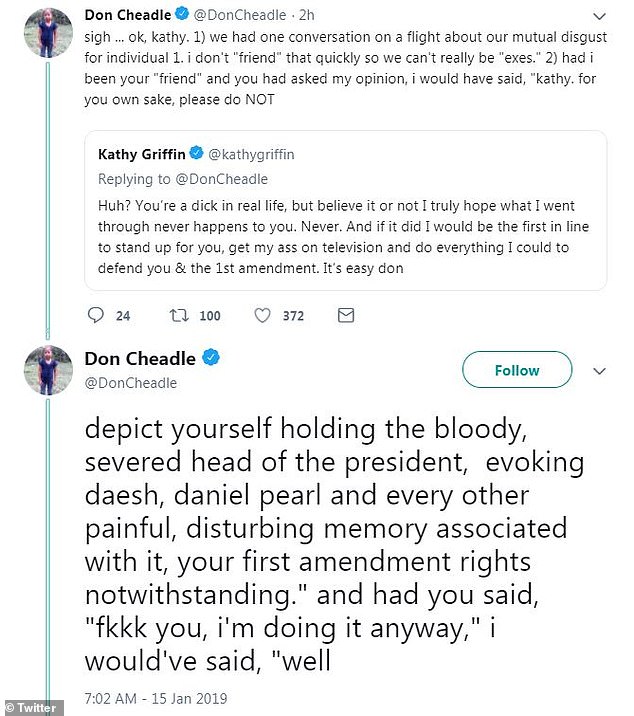 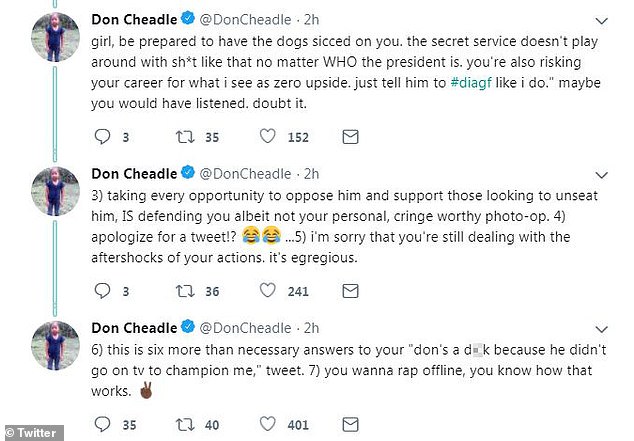 Cheadle’s full response to Griffin’s attack is seen above. Griffin has yet to publicly respond

Cheadle was quick to fire back with a lengthy defense.

He wrote: ‘sigh … ok, kathy. 1) we had one conversation on a flight about our mutual disgust for individual 1. i don’t “friend” that quickly so we can’t really be “exes.”

‘2) had i been your “friend” and you had asked my opinion, i would have said, “kathy. for you own sake, please do NOT depict yourself holding the bloody, severed head of the president, evoking daesh, daniel pearl and every other painful, disturbing memory associated with it, your first amendment rights notwithstanding.” and had you said, “fkkk you, i’m doing it anyway,” i would’ve said, “well girl, be prepared to have the dogs sicced on you. the secret service doesn’t play around with sh*t like that no matter WHO the president is. you’re also risking your career for what i see as zero upside. just tell him to like i do.” maybe you would have listened. doubt it.

‘3) taking every opportunity to oppose him and support those looking to unseat him, IS defending you albeit not your personal, cringe worthy photo-op.

‘…5) i’m sorry that you’re still dealing with the aftershocks of your actions. it’s egregious.

‘6) this is six more than necessary answers to your “don’s a d**k because he didn’t go on tv to champion me,” tweet.

‘7) you wanna rap offline, you know how that works.’

Hundreds of fans of both figures have also jumped into the conversation to defend either side.

Many expressed that they thought Griffin was being overly sensitive by dragging up such a small tweet from so long ago.

The comedian has yet to respond to Cheadle’s thread publicly. 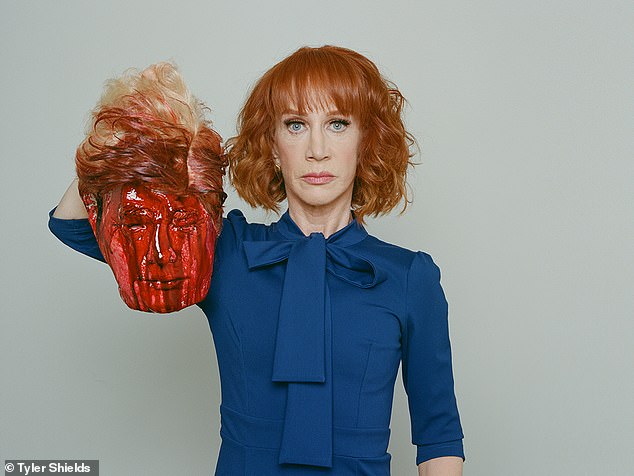