Donald Trump’s eldest son became the good-natured target of a viral Twitter meme on Monday after stumping for a Republican congressional candidate at a Pennsylvania candy factory.

A picture captured by a Pittsburgh news photographer shows a trio of chocolate bunnies in the foreground and Donald Trump Jr. in the background, being interviewed by a TV reporter.

But the angle of the photo makes the treats look massive – and puts the interviewer’s arm in the perfect position to appear like part of one rabbit.

The result: a chocolate Easter bunny ‘interviewing’ the outspoken member of the first family.

‘This is the danger of campaigning at a candy factory,’ photojournalist Andrew Rush tweeted after capturing this shot of Donald Trump Jr. in Canonsburg, Pennsylvania on Monday

Donald Trump Jr. laughed on Twitter at the photo of a chocolate bunny ‘interviewing him’ 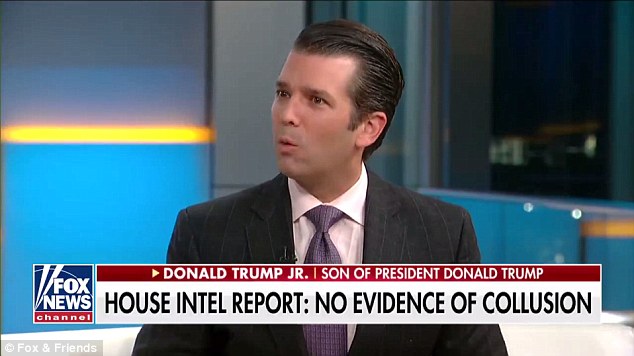 Don Jr. poked fun at himself as the meme gathered steam. ‘The chocolate rabbit gave a hard hitting interview and was delicious afterwards,’ he tweeted.

On ‘Fox & Friends’ Tuesday morning, he turned the goofy moment into a commentary on the political reporters his father loves to hate.

‘Much more credible than many of the news outlets out there,’ he declared of the edible hare. ‘And when they asked me a tough question I just ate it. It was great.’

He pronounced the moment ‘pretty classic, but again, still more credible than CNN.’

Political Twitter lit up as the photo made the rounds.

‘In the next photo, Putin eats his way out of the Trojan bunny,’ jabbed BusinessWeek writer Ashlee Vance.

And New York Times culture reporter Dave Itzkoff turned it into a commentary on a controversial meeting Don Jr. took with a Russian lawyer in 2016 to collect opposition research on Hillary Clinton.

He described the scene as ‘when you definitely didn’t take a meeting to dig up dirt on Marshmallow Peeps.’

The president’s son and Trump Organization executive donned a hairnet as he was shown how chocolate handcuffs are made at Sarris Candies during a campaign stop in Canonsburg.

He and Saccone were given a tour of the business by retail operations manager Norm Candelore and spoke to workers while being shown the various candies. 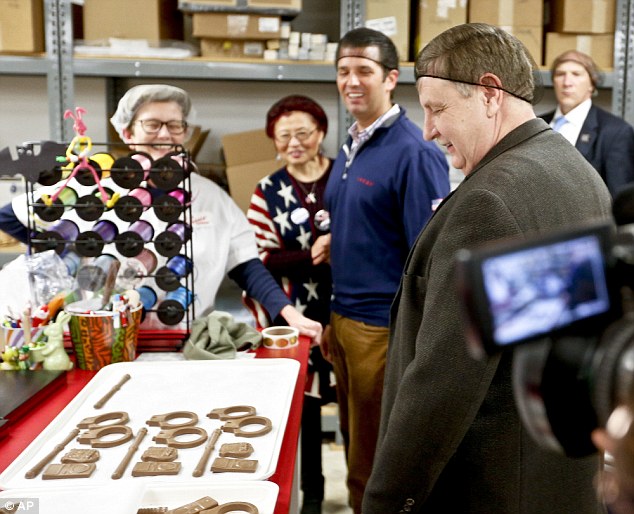 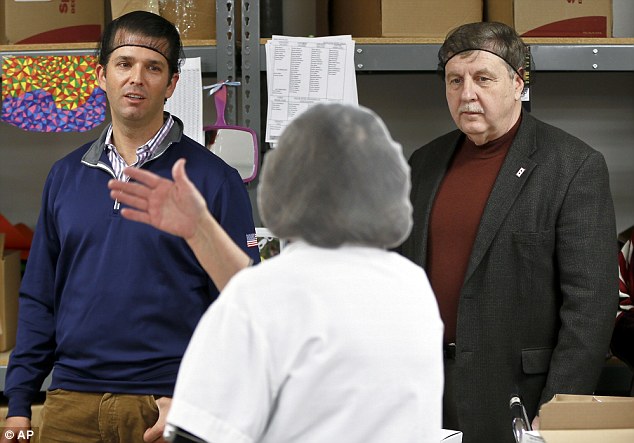 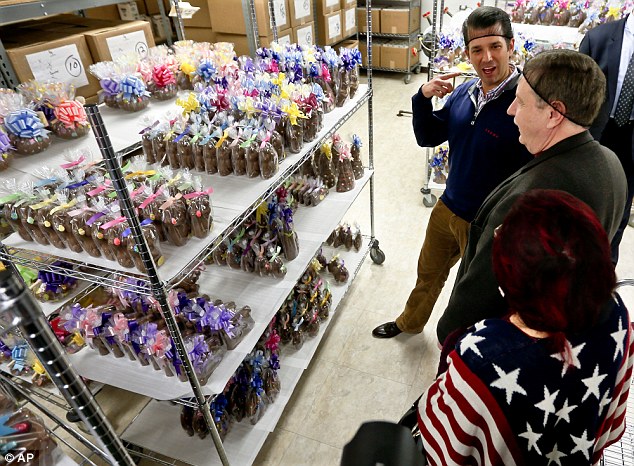 Republican Saccone is trying to stave off an upset by Democrat Conor Lamb in a Pittsburgh-area district that backed President Donald Trump by 20 percentage points in 2016.

Democrat Conor Lamb, a 33-year-old Marine veteran and former federal prosecutor, is in a dead heat with Republican state Representative Rick Saccone in Tuesday’s special election for an open seat in the U.S. House of Representatives that Republicans have held since 2003.

The race is seen as a referendum on Trump and a harbinger for November’s congressional midterm elections, according to pollsters and party insiders who say the moderate Democrat could emerge as a model for Democratic candidates in other competitive House districts that Trump carried in 2016.

‘The Democrats have nominated the ideal candidate, because he fits the profile of the electorate. If they’d nominated a liberal who allowed the campaign to become nationalized, it would be over by now,’ said G. Terry Madonna, director of the Franklin and Marshall College Poll in Lancaster, Pennsylvania. 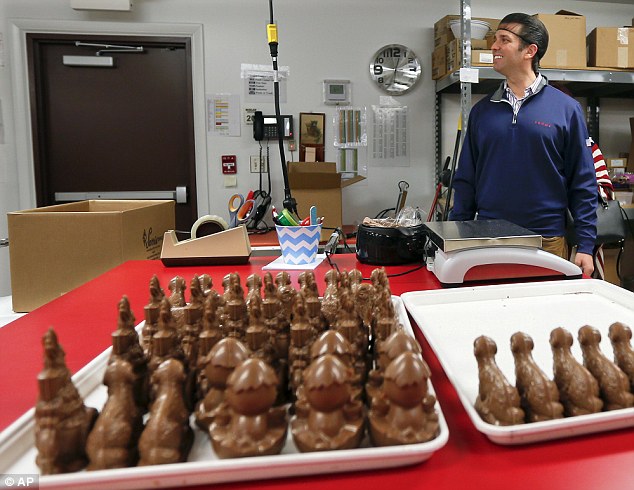 An army of potential reporters faced off with Don Jr. – showing at last their tiny size 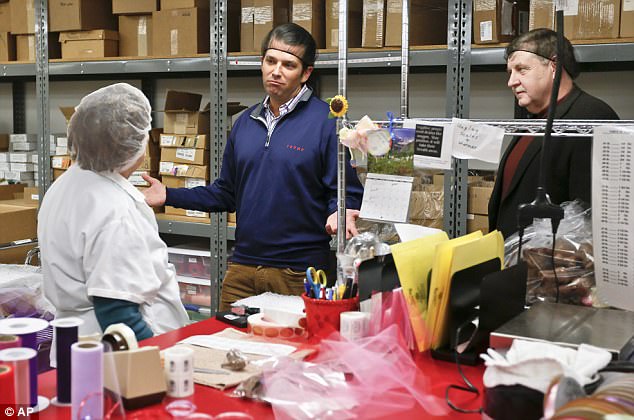 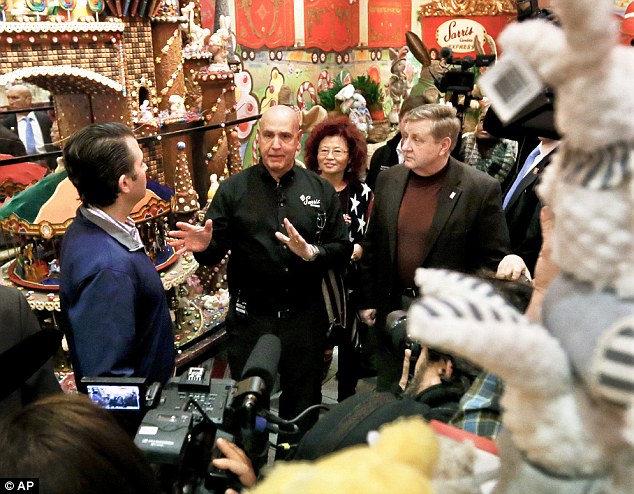 ‘If he wins, or even if he just comes close, he is a model for Democrats in competitive Trump districts nationally.’

Republican dominance has been so strong here that Democrats ran no candidates in the last two U.S. House elections, even though state voter registration records show Democrats outnumbering Republicans.

But the dynamics have changed in the district, which runs from wealthy suburbs south of Pittsburgh through hardscrabble steel and coal mining towns to farmlands along the West Virginia border.

Saccone, 60, a conservative who has described himself as ‘Trump before Trump was Trump,’ led the race by more than 10 percentage points in January. The contest has since narrowed to a toss-up on a wave of Democratic voter enthusiasm for Lamb.

A Monmouth University poll on Monday showed Lamb ahead.

Bob Zelleznick, 59, of Bethel Park, said he intends to vote for Lamb and hopes for a Democratic win that would make the White House sit up and take notice.

‘This is important because I think it will send a message to Washington: a lot of people are unhappy with the administration,â Zelleznick said. 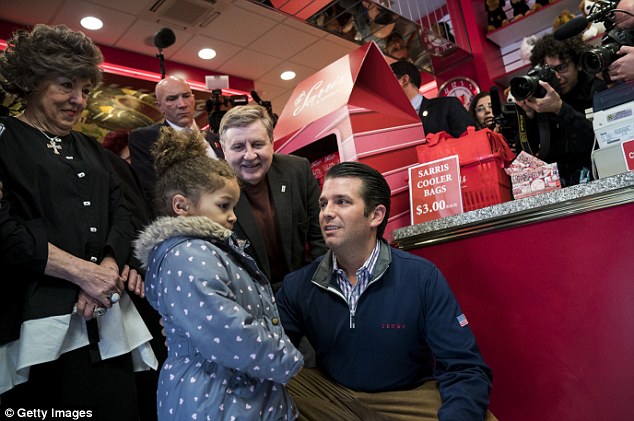 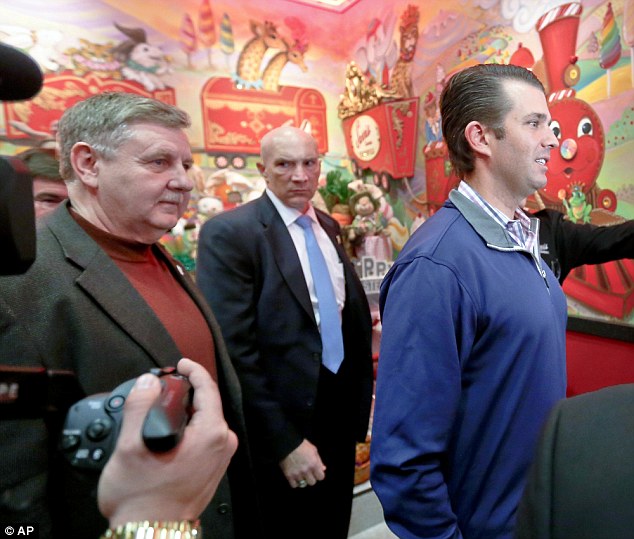 Saccone, left, was training his Democratic rival in a poll released Monday, despite running in a district that favored Donald Trump in 2016 by 20 percentage points

The White House has arranged a string of visits to energize Saccone’s base. Trump himself has visited twice. The area has also seen Vice President Mike Pence, Trump adviser Kellyanne Conway, and on the eve of Election Day, Don Jr.

‘When President Trump’s in your corner, how can you lose?’ Saccone told supporters at a weekend rally with the president.

A college professor and former Air Force counterintelligence officer, Saccone won an endorsement from the influential Pittsburgh Post-Gazette newspaper, which praised his greater experience and knowledge of the district. 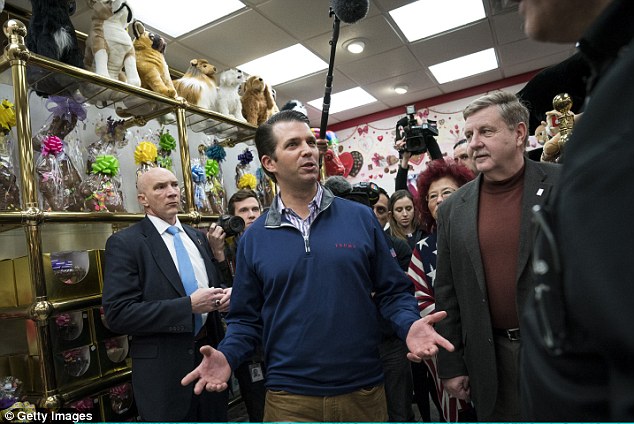 As Easter Sunday approaches, Sarris Candies was operating at full steam when Trump and Saccone dropped by 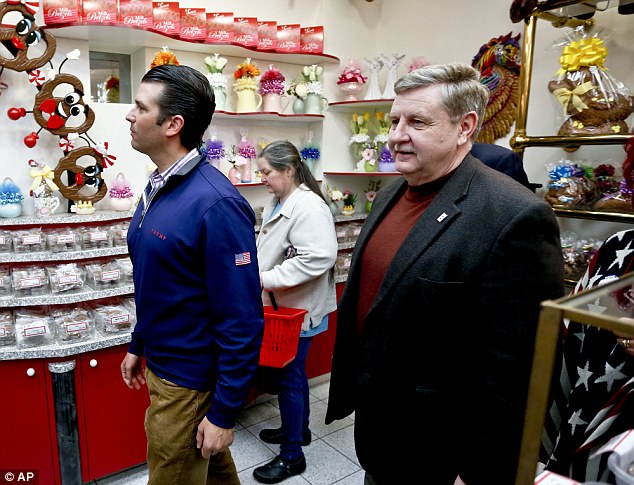 Saccone has not had much luck running on the Republican national agenda, failing to leverage Trump’s tax cuts into a winning local issue

‘He supports small business owners and would do anything for you to make sure that your business is successful,’ said Stephanie Squibb, 48, of Elizabeth, who owns a local printing company.

But Saccone has not had much luck running on the Republican national agenda. Tax cuts, the Republican Party’s only major achievement under Trump, have done little to energize local voters, some of whom dismiss the sweeping tax overhaul as a giveaway to the wealthy.

Republicans see the president’s plans to impose steel and aluminum import tariffs as a way to generate enough enthusiasm among Trump’s blue-collar supporters to counteract the energy of Lamb’s backers.

‘They’re hoping this is something that potentially, in the grand calculus, could throw Saccone over the top,’ said Republican strategist Ford O’Connell.