Don McClean: American Pie? I haven’t a clue what it means… and I wrote it!

It’s one of the all-time classics, a radio and jukebox standard for almost 50 years – yet American Pie remains one of the most mysterious songs of all time. Yes, ‘the day the music died’ references the 1959 plane crash that killed Buddy Holly, the Big Bopper and Ritchie Valens. But lines like ‘drove my Chevy to the levee but the levee was dry’ have baffled fans for decades. Yet even its creator insists he’s somewhat in the dark.

‘I don’t know what I’m doing,’ Don McLean, 72, says. ‘I don’t have a clue. I invent things. Sometimes I hear a song and it comes out like a beautiful thing. Sometimes I have to fight with a producer who doesn’t get it.’

Does that mean the singer-songwriter, who also gave the world the similarly legendary Vincent, his ode to Van Gogh, doesn’t really know what American Pie means either?

‘That’s absolutely true,’ he nods. ‘Not only that, I don’t want to debase the basic magic of the song. But I’m not being coy either, at all. It seems to make sense… but maybe it doesn’t.’

1976, Los Angeles, California, USA: Don McLean (b.1945) American singer-songwriter. He is most famous for the 1971 classic album American Pie

He was impressed with Madonna’s 2000 cover version: ‘I think it is sensual and mystical. I also feel that she’s chosen autobiographical verses that reflect her career and personal history. I have received many gifts from God, but this is the first time I’ve received a gift from a goddess.’

McLean started out as a Left-wing folkie in early Sixties New York, writing hits such as The Grave, an anti-Vietnam War anthem. ‘I had the American government up my a** for several years to have a physical for the draft for Vietnam,’ he says. ‘And I was putting it off with all kinds of legal manoeuvrings while I was going to college – I was trying to get different deferments to get away from that war.

‘A lot of my friends were getting messed up or killed. One kid I knew in school came in bragging, “I’m going to go to Vietnam and I’m going to kill gooks.” Six months later he was dead. Another kid I admired went and got killed. One came back all messed up with shell shock. So I marched in a demonstration against the war in Washington and wore the name of one of those friends across my chest.’

Yet embarrassingly, McLean’s most recent run-in with the authorities had nothing to do with anti-Establishment protests. In 2016, he was arrested at the Maine home he shared with his second wife, Patrisha. In her police statement, the mother of his two children wrote: ‘On January 17, Don terrorised me for four hours until the 911 call that I think might have saved my life. He was scaring me with the intensity of his rage and the craziness in his eyes.’ 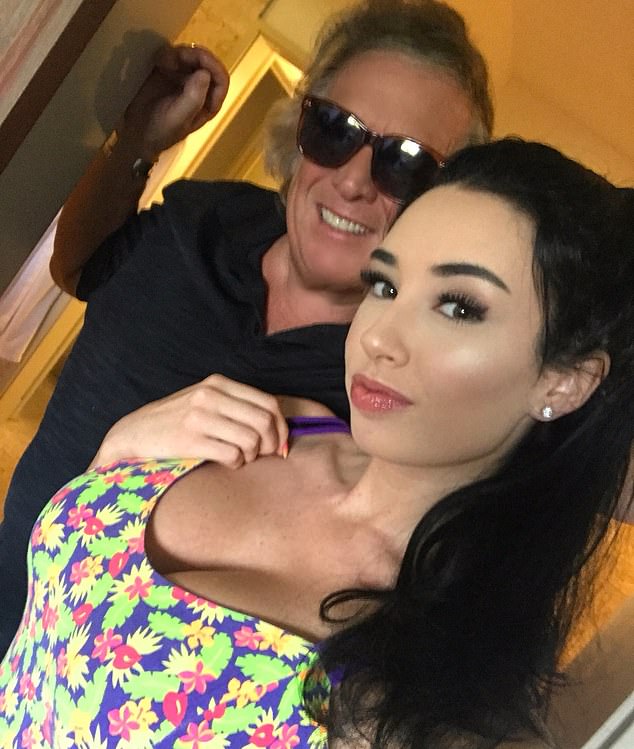 24-year-old glamour model Paris Dylan, who’s rumoured to be his fiancee. ‘But no, I’m not engaged to someone – I’m engaged to myself,’ he smiles

‘That was a disgusting period,’ he says over morning coffee in a London hotel, ‘and a lot of disgusting things were said by some disgusting people. And I just want to move on. I don’t have time to deal with any of it. Everything’s turned out well for me. I’m happily divorced, and my children are close to me. I have most everything I started with. I kept all four houses, the two in Maine and the two in Palm Desert, California,’ he says, smiling thinly. ‘But that’s not what it’s about. I made a large settlement, and I was happy to do it. Thirty years with somebody, she deserves something. So there’s no problem from my end.’

During those troubling times two years ago, McLean wrote: ‘There are no winners or losers but I am not a villain… I hope I will not be judged in this frantic media environment.’

Is it frustrating that some observers take the view that mud sticks? ‘Not one person came forward to corroborate anything that was said about me. Not one person,’ he says with simmering anger. ‘And it was spread all over the world.

‘That bothers me, but what can I do? I am not going to go after anybody and say things about anybody. I’m not that kind of person. It’s simply something that was done to me and I let it all work out on its own. It was painful, but it’s another lesson in life I just absorbed.’ 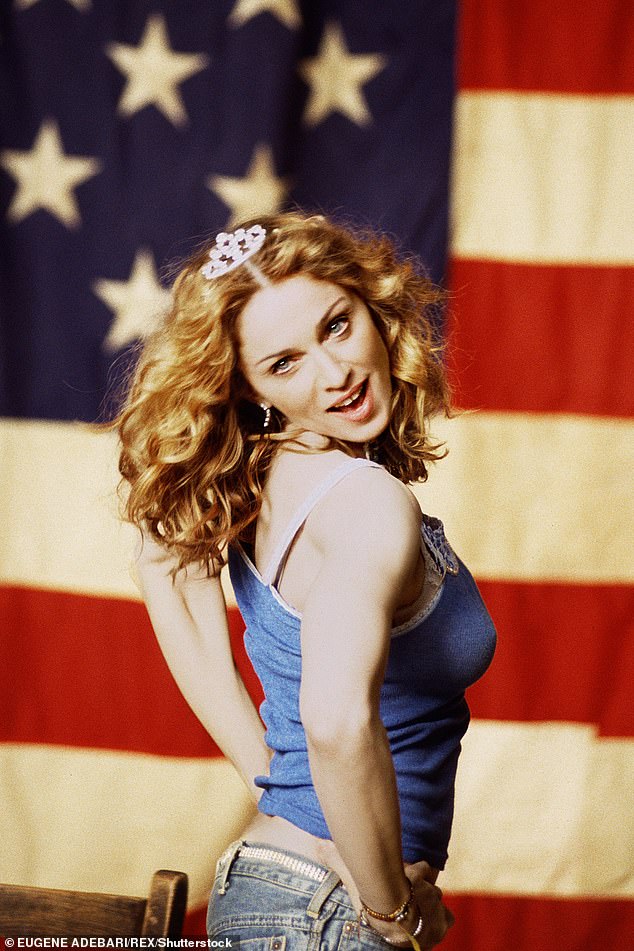 He was impressed with Madonna’s 2000 cover version: ‘I think it is sensual and mystical. I also feel that she’s chosen autobiographical verses that reflect her career and personal history’

He says he’s been gratified that there seems to have been no lasting damage to his reputation. His concert bookings remain healthy – he’s due to play 32 dates in the UK and Ireland between April and June.

‘You have to soldier back, because I love what I do. And people wanted to book me and hear me, and didn’t want to lose me. I learned something: how much people actually love me. I didn’t know that before. So a lot of good has come out of this.’

That seems to be the case personally, too. The badge on the lapel of his denim jacket features a cartoon duck and the slogan, ‘Let the adventures begin’. And a few hours from now he’ll be photographed leaving a hotel with 24-year-old glamour model Paris Dylan, who’s rumoured to be his fiancee.

Indeed, on the new perky, country-ish, Nashville-recorded album Botanical Gardens, McLean sounds on top of the world. As he declares on the jaunty The Lucky Guy: ‘When it comes to love, I’m the lucky one.’ So does he have a new lady? That’s a big fat diamond sparkler on his ring finger. ‘Oh, I love rings like that,’ he says, waggling a chunky digit. ‘But no, I’m not engaged to someone – I’m engaged to myself,’ he smiles, refusing to confirm whether or not he has a new girlfriend.

Yet for all the seeming contentment, it doesn’t take much for McLean to talk passionately – and witheringly – about the current political and social climate in the USA.

‘I walk around here,’ he says, gesturing out of the window, ‘and I see people who are pretty trim and they’re riding bikes and they’re young and enjoying London and it’s light and bright. Then I go back home and everybody’s got walkers and they’re overweight and on drugs. This is the kind of population that gets overtaken,’ he says apocalyptically.

McLean, who began his career as a countercultural contemporary of Bob Dylan, has some harsh words for America under Donald Trump. ‘It is reality television,’ he says. ‘We have the same kind of showbusiness: these bloviating, meaningless rallies with balloons and fireworks – and no music! It shows you how easily an audience can be satisfied. It’s just a form of decadence. And decadent countries get overtaken,’ he repeats.

This means that at least one aspect of American Pie still has resonance in Trump’s America, as his iconic state- of-the-nation lamentation, written as the Sixties gave way to the Seventies, captured a feeling of the loss of innocence.

McLean can be disarmingly frank on other matters, too. He says he rates George Michael’s cover of The Grave – ‘a beautiful job’ – but, listening to Michael’s own music, ‘I wouldn’t be able to tell how talented he was’. He was also underwhelmed by Sting. ‘I heard him do a bunch of songs in Leaving Las Vegas,’ he says of the ex-Police man’s trio of covers of jazz standards. ‘He did a terrible job. He had the emotional range of about one out of ten.’

McLean is not one for a mellow slide into dotage. He remains as impassioned as he was in those early days, standing up for what he believes in and decrying what he doesn’t. But he would rather that the music, and those timeless classics of his, do all the talking.

‘I’m on this planet in this galaxy in the midst of millions of other galaxies. How can anyone be important? We must treat each other with respect. But I don’t kiss rings. And I don’t want mine kissed,’ he grins, flashing that wedding ring finger meaningfully. ‘Even though it is nice.’ e

The new album ‘Botanical Gardens’ is out now. Don McLean is touring the UK from April 29. Visit don-mclean.com for details