President Donald Trump executed a stunning turnaround Thursday and announced that many U.S. schools will have to delay reopening despite his repeated urgings that they must open in the fall.

After pushing for weeks for schools to reopen and stressing the risks of keeping them closed, Trump said school districts in coronavirus hot spots ‘may need to delay reopening for a few weeks. That’s possible. That’ll be up to governors.’

And putting stock in science and infection rates, Trump said: ‘The decision should be made based on the data and the facts on the ground.’

It was an acknowledgement that his admonition that schools must reopen at the traditional time may not be possible amid a coronavirus pandemic that the president now admits will get worse before it gets better.

He made the announcement just moments after announcing the cancellation of the Republican convention in Jacksonville, bowing to the reality of a surge of infections in the Sunshine State.

School districts ‘may need to delay reopening for a few weeks,’ President Trumps said Thursday in a stunning turnaround

Rival Joe Biden and Democrats have blasted Trump for pushing schools to reopen, accusing him of seeking to minimize the coronavirus and force reopening to help his reelection campaign.

Taken in concert – ditching the convention, going along with phased reopening, watching GOP senators walk away from his payroll tax cut in new coronavirus legislation – the president appeared to be going into repositioning mode as he confronts daunting polls nationally and in battleground states.

‘I hope that local leaders put the full health and well-being of their students first,’ Trump said, ‘and make the right decision for children, parents teachers and not make political decisions.’

Then, he mused about the politics of the decision – amid concerns about the health of teachers, the risks students bring infection into the home, balanced against the need to educate children and get them into school systems to free parents to work.

But the politics of Trump’s demand that schools reopen were not on his side.

The news for Trump was also grim in a new  Associated Press-NORC Center for Public Affairs poll.

Just over one-third, 36 per cent of Americans approve of Trump’s performance on education, with 63 per cent disapproval.

Democrats were twice as likely as Republicans to call for mixed instruction rather than in-person.

The polls reflect weeks of demands by Trump for schools to reopen.

Back on July 6, as schools around the country searched for ways to reopen, Trump tweeted: ‘“SCHOOLS MUST OPEN IN THE FALL!!!”

At a July 7 speech on ‘Safely Reopening Schools,’ Trump said: ‘We want to reopen the schools. Everybody wants it. The moms want it, the dads want it, the kids want it. It’s time to do it.’

Trump also issued a threat on Twitter to deny funds to schools that don’t reopen.

“I disagree with @CDCgov,” Trump wrote, after leaked guidelines on when schools could safely decide to reopen. “While they want them open, they are asking schools to do very impractical things. I will be meeting with them!!!”

He tweeted July 8: ‘In Germany, Denmark, Norway, Sweden and many other countries, SCHOOLS ARE OPEN WITH NO PROBLEMS. The Dems think it would be bad for them politically if U.S. schools open before the November Election, but is important for the children & families. May cut off funding if not open!’ 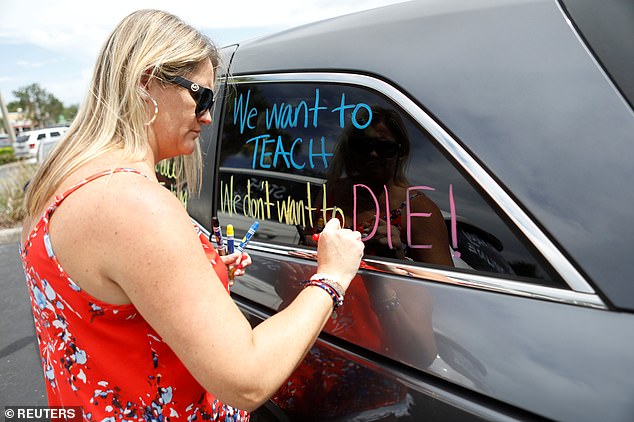 Fifth-grade teacher Danielle Biggs writes a message against the reopening of schools while other Florida teachers, whose unions are against their members returning to school, hold a car parade protest in front of the Pasco County School district office in Land O’ Lakes, Florida, U.S. July 21, 2020 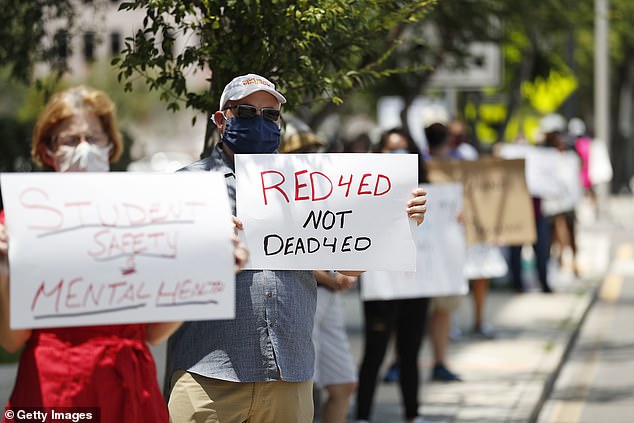 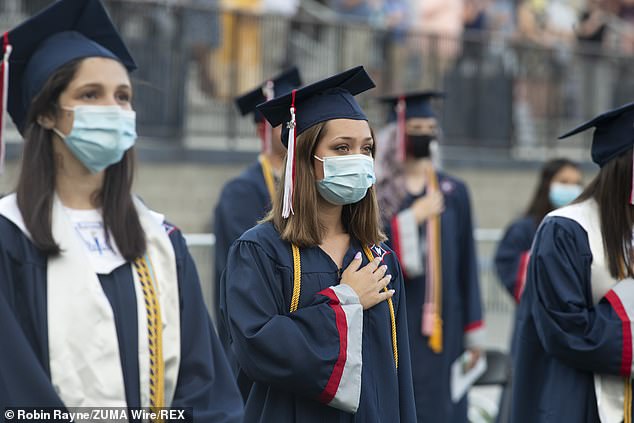 But he injected hot issues into the topic by saying funds should follow the children and could go to religious institutions or even for home schooling.

‘If schools do not reopen,’ Trump said the funds could go to ‘public, private, charter, religious, or home school of their choice.’

‘If the school is closed the money should follow the student, so parents and families are in control of their own decisions so would like the money to go to the parents of these student. this way they can make the decision that’s best for themTrump said.

He said funds would go to mitigation measures, mask wearing, and repurposing spaces.

‘We can not indefinitely step 50 million American children from going to school harming their mental, physical and emotional development. Reopening our schools is also critical to ensuring that parents can go to work and provide for their families,’ Trump said.

Trump’s announcement came moments after he nixed the GOP’s Jacksonville convention – which he had also been saying must go forward even as critics pointed to a spike of infections in Florida.

‘We have to be vigilant we have to be careful. ‘There’s nothing more crowded than a convention,’ he said.

Trump said the Centers for Disease Control would be reducing guidelines on how schools could safely reopen.

Even as he pulled back from his all-out opposition to schools delaying reopening, Trump made the case for getting students back in classroom.

He said they were at lower risk of getting coronavirus, and said schools are where teachers and other adults often identify abuse and neglect occurring in the home.

‘You don’t get to see that if you’re not going to school it’s a big thing,’ Trump said.

Trump’s announcement came on a day when two polls showed him trailing Joe Biden in battleground Florida, while a trio Fox News had him trailing in Michigan, Pennsylvania, and Minnesota.