President Trump and his allies jumped on the opportunity to shame Joe Biden for saying to a popular black radio show host ‘you ain’t black’ if you ‘have a problem figuring out whether you’re for me or Trump.’

Biden, the Democrats’ presumptive presidential nominee, made the cringey comment to Charlamagne tha God at the end of a contentious 18-minute interview for his show ‘The Breakfast Club’ that aired Friday morning.

Shortly thereafter, two Trump surrogates – Katrina Pierson and Sen. Tim Scott – slapped back on a conference call with reporters, with Pierson characterizing Biden’s quip as ‘extremely racist’ and ‘the definition of white privilege.’

Scott had also gone on Fox Business Network and remarked that what Biden said was ‘the most arrogant, condescending comment I have heard in a long time.’

Vice President Joe Biden (right) appeared on ‘The Breakfast Club’ Friday with popular host Charlamagne tha God (left) and told the radio show host, ‘If you have a problem figuring out whether you’re for me or Trump, then you ain’t black’ 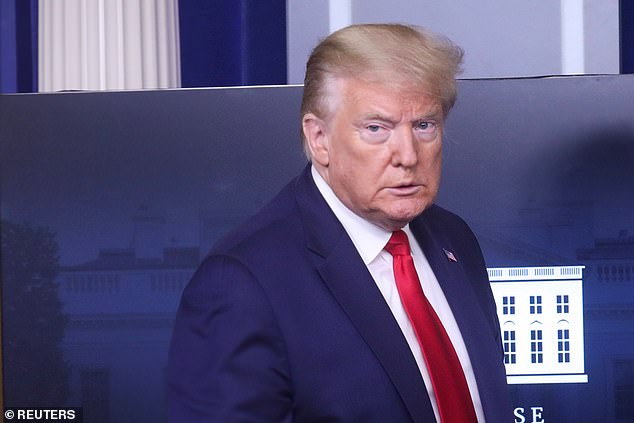 President Trump deployed his surrogates, his son and the retweet button to go after Joe Biden after the presumptive Democratic nominee made the controversial quip to Charlamagne tha God 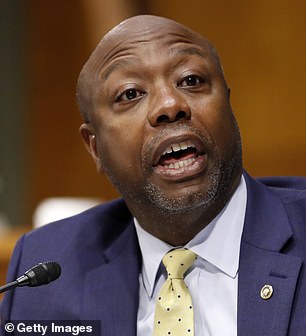 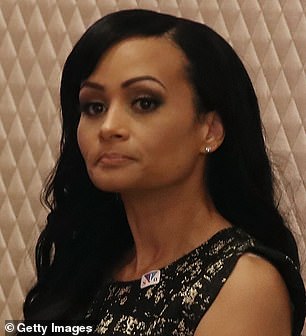 Trump campaign surrogates Sen. Tim Scott (left) and Katrina Pierson (right) jumped on a call with reporters Friday morning to discuss what Biden had said. Both didn’t believe Symone Sanders’ explanation that it was ‘in jest.’ Pierson also said she’d be open to Trump appearing on ‘The Breakfast Club’ with Charlamagne tha God 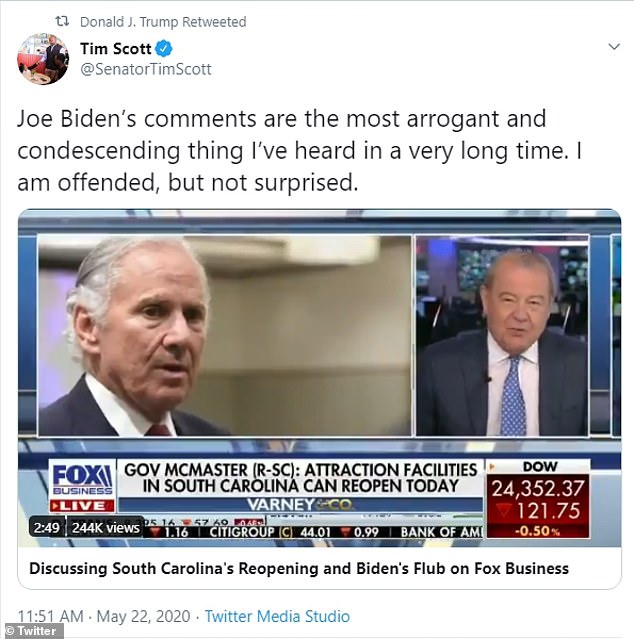 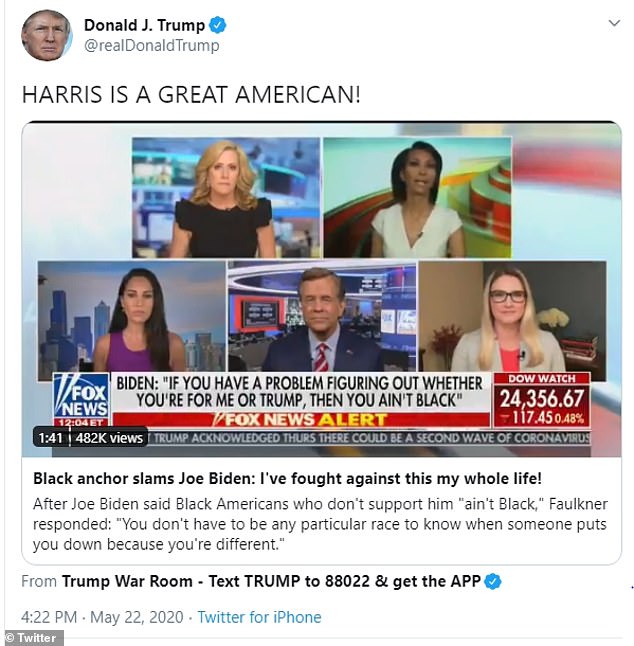 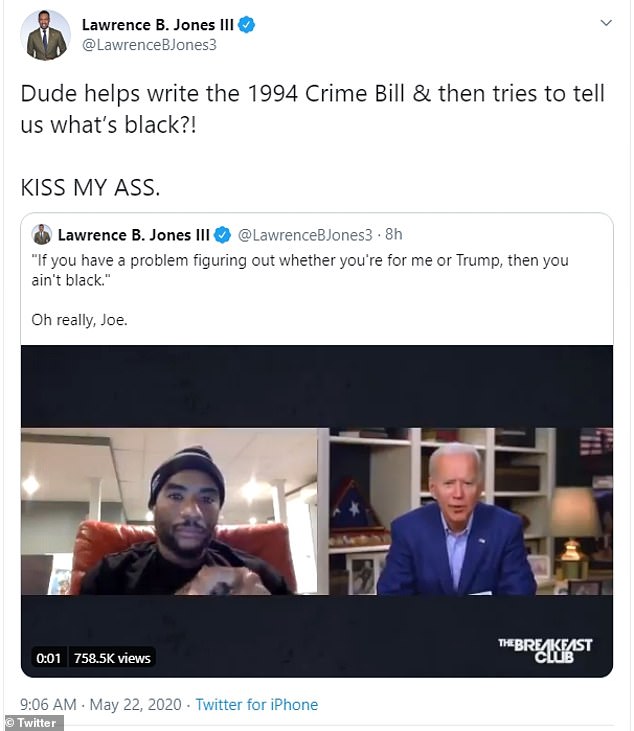 Donald Trump Jr. did his part by sharing tweets from black conservatives including libertarian Lawrence B. Jones III who said Biden could kiss his a** 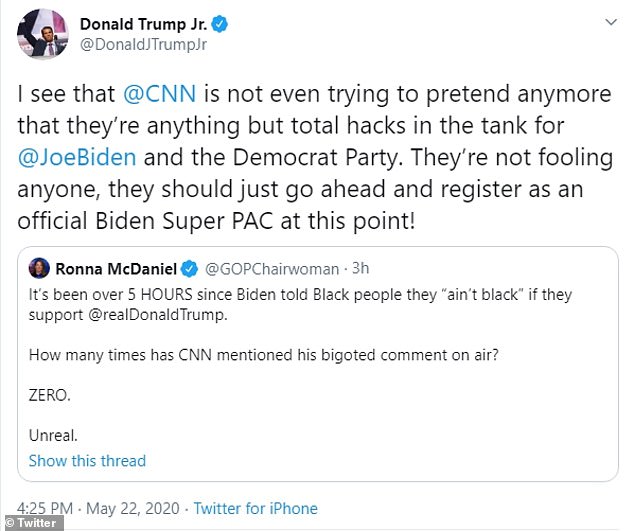 ‘HARRIS IS A GREAT AMERICAN,’ Trump wrote in all caps.

‘It is short-sighted, it is a blind spot for this former vice president,’ he continued. ‘He should have gotten up immediately on whatever venue, microphone he had,’ she said, and restated those comments, she added.

Biden did apologize several hours later on a phone call with members of the U.S. Black Chamber of Commerce, which was leaked to the press.

‘I should not have been so cavalier. I’ve never, never, ever taken the African-American community for granted,’ Biden said, according to the Associated Press. ‘I shouldn’t have been such a wise guy.’

Biden added that, ‘No one should have to vote for any party based on their race, their religion, their background.’

Earlier, his senior adviser Symone Sanders, who is black, had tweeted that Biden had meant the comment ‘in jest.’

But by the time Biden apologized the comment had snowballed online.

Black Entertainment Television Founder Robert L. Johnson said in a statement to Fox News’ Bret Baier that ‘This proves unequivocally that the Democratic nominee believes that Black people owe him their vote without question.’

Diddy, also known in some circles as Puff Daddy, tweeted a response to Biden’s comments Friday using the hashtag #BlackVoteAintFree 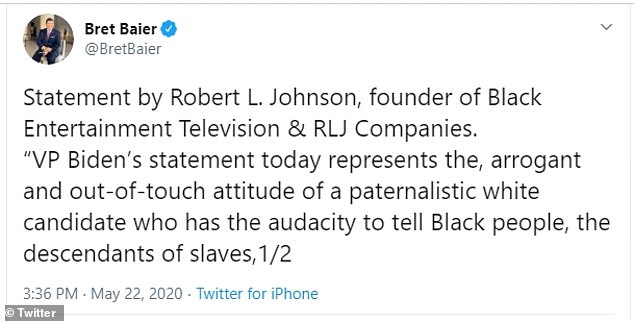 ‘I see that @CNN is not even trying to pretend anymore that they’re anything but total hacks in the tank for Joe Biden and the Democrat Party,’ Trump Jr. said. ‘They’re not fooling anyone, they should just go ahead and register as an official Biden Super PAC at this point!’

A CNN spokesperson has yet to respond to a request for comment.

Biden’s ‘Breakfast Club’ interview came out first thing Friday morning and was memorable for an aide interrupting the back-and-forth several times, telling Biden his wife Jill needed to use the home studio.

Previously, Charlamagne tha God had criticized both Biden and Bernie Sanders for not having a concrete economic plan for black Americans.

During an interview on MSNBC in March, as the Democratic primary was winding down, the radio host said he wanted to see a ‘specific agenda’ for black America similar to what candidate Michael Bloomberg had come up with during his brief campaign.

Charlamagne the God had also previously criticized Biden for avoiding his show, while all the other top-tier Democratic candidates viewed it as a must-do during the primary.

The radio show host had on Sanders, Kamala Harris, Cory Booker, Pete Buttigieg and Elizabeth Warren, who he told to her face sounded like ‘the original Rachel Dolezal’ by claiming native American heritage.

‘We have been loyal to Democrats for a long time, black people have invested a lot into that party and the return on investment has not been great,’ Charlamagna tha God told Mediaite Friday, responding to Biden’s comment.

The radio host noted that Biden had admitted the party owed something to the black community for that support.

‘So let’s see what you got!!!’ he said in a written statement. ‘Votes are Quid Pro Quo. You can’t possibly want me to Fear Trump MORE than I want something for my people.’