Donald Trump backs Boris for PM: President told Johnson they would have ‘a great relationship’

Donald Trump backs Boris: President reveals he told Johnson they are ‘going to have a great relationship’ and new PM will ‘straighten out’ Theresa May’s ‘poor Brexit job’ in phone call yesterday (even though he’s not yet Tory leader)

Donald Trump gave Boris Johnson a ringing endorsement today saying the favourite to replace Theresa May would do a ‘great job’ as prime minister.

The US president told reporters in Washington he had spoken to Mr Johnson yesterday, with days to go until the vote for  the next Tory leader closes.

Speaking to reporters in the Oval Office Mr Trump said: ‘I like him. I spoke to him yesterday.’

‘He is going to do a great job,’ the Republican president added. ‘We get along well.

‘I think we’re going to have a great relationship.’

It comes after relations between the two countries became strained over the release of secret cables from ambassador Sir Kim Darroch criticising the Trump administration.

Speaking to reporters in the Oval Office (pictured) Mr Trump said: ‘I like him. I spoke to him yesterday.’ 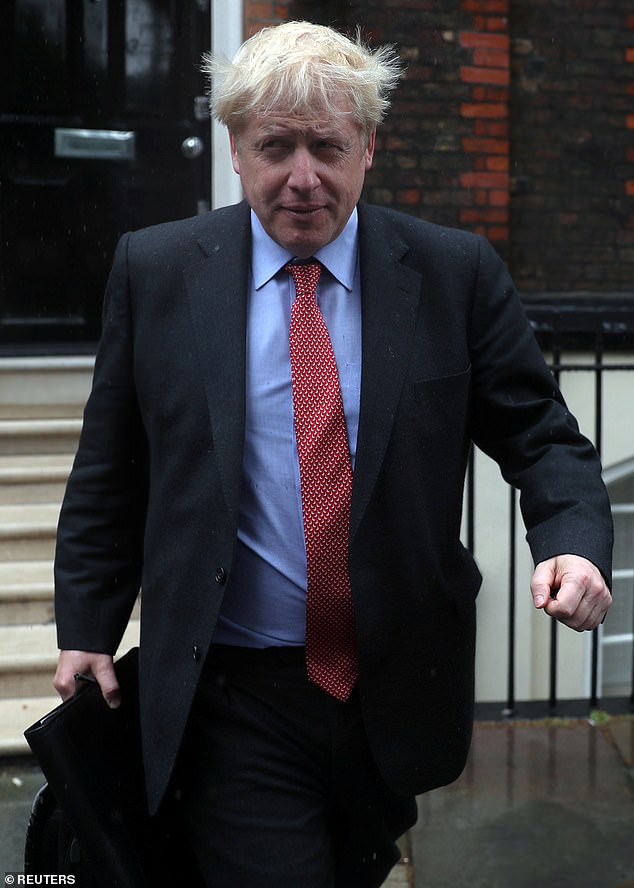 Mr Trump has also been facing criticism over racially charged comments he made about four female minority Democrat congresswomen this week.

Mr Johnson has been attacked over what was perceived as muted criticism of the American leader in both cases.

He said she did a ‘poor job’, adding:  ‘I think Boris will straighten it out.’

The President doubled down on his attack of ‘radical left Democrats’ whose open border policies, he claimed, would cripple the the country with crime

Last week Mr Johnson’s rival Jeremy Hunt demanded Mr Trump treat the UK ‘with respect’ as he criticised the president for attacking the prime minister and vowed to keep the UK’s ambassador in Washington in post if he becomes prime minister.

The Foreign Secretary said Mr Trump was ‘disrespectful and wrong’ to have called Mrs May a ‘disaster’ and Sir Kim Darroch a ‘pompous fool’ as he upped the stakes in a worsening row over leaked diplomatic memos.

The US President had described Sir Kim as a ‘very stupid guy’ who had been ‘foisted upon the United States’ and labelled Mrs May’s handling of Brexit a ‘mess’ before then calling her ‘foolish’.

But Mr Johnson was criticised after failing to back Sir Kim during a live televised leadership debate, a move which it was claimed led partly to the respected diplomat’s resignation the following day.

The Tory candidate – who has found himself in hot water over alleged racist comments in the past – said On Monday night that world leaders ‘simply cannot use that kind of language’.

However, he stopped short of calling Trump a racist when pressed by Tory debate moderators – as did his rival Jeremy Hunt in their final head-to-head leadership debate. 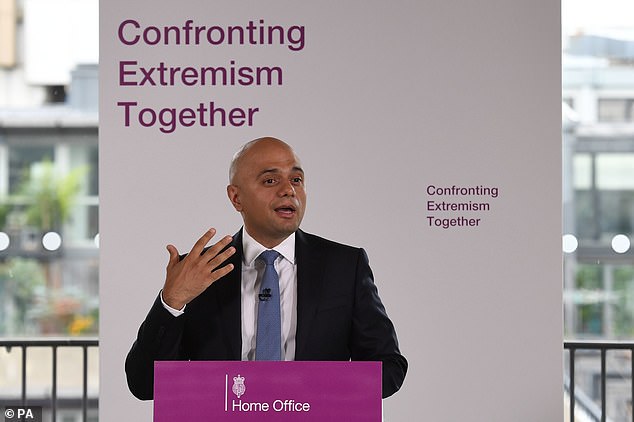 In his speech today in London Mr Javid said: ‘I’m from an immigrant family, I know what it’s like to be told to go back to where I came from – and I don’t think they mean Rochdale’

The transatlantic endorsement came after Sajid Javid took a swipe at racially charged rhetoric used by Mr Trump and other populist leaders today as he demands public figures ‘moderate their language’ to halt the spread of poisonous ideologies.

The Home Secretary called for an honest ‘national conversation’ about extremism and challenge anti-immigration rhetoric, which he says is stoking division and fear.

It comes after the US president sparked a racism row when he sent tweets telling four female Democratic politicians to ‘go back’ to the countries from which they came.

The president is facing widespread condemnation over comments widely perceived to be about outspoken critic Alexandria Ocasio-Cortez and three other female politicians, Ilhan Omar, Ayanna Pressley and Rashida Tlaib.

Only Ms Omar, from Somalia, is foreign-born, and she has lived in the US since arriving as a 10-year-old refugee in 1992.

His tweets were followed by a crowd at one his his rallies chanting ‘send her back’ about Mrs Omar, one of his fiercest critics.

In his speech today in London Mr Javid said: ‘I’m from an immigrant family, I know what it’s like to be told to go back to where I came from – and I don’t think they mean Rochdale.

‘To be truly pro-immigration we must be pro-integration too.

‘To do this, we must confront the myths about immigration that extremists use to drive divisions.

‘We know the scale is exaggerated to stoke up fear and that they use immigration as a proxy for race.

‘Sweeping plans to cut immigration as if it’s automatically bad can add to the stigma.’