Donald Trump continued rail against The New York Times on Tuesday, after the newspaper walked back a new story suggesting his second Supreme Court appointee sexually assaulted a Yale co-ed decades ago.

‘The New York Times is now blaming an editor for the horrible mistake they made in trying to destroy or influence Justice Brett Kavanaugh,’ Trump wrote in a tweet on Tuesday night after landing in Los Angeles for a fundraiser.

‘It wasn’t the editor, the Times knew everything. They are sick and desperate, losing in so many ways!’ he continued.

Times reporters Robin Pogrebin and Kate Kelly on Tuesday made media appearances blaming an editor’s ‘oversight’ for key information that was omitted from their story about Kavanaugh published on Sunday.

Trump disembarks from Air Force One at Los Angeles International Airport on Thursday, shortly before renewing his Twitter attack on the New York Times 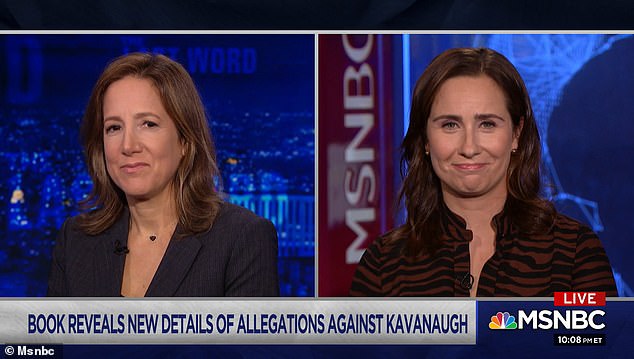 New York Times reporters Robin Pogrebin (left) and Kate Kelly (right) said on MSNBC that their story originally included the fact that the woman at the center of a new claim of sexual misconduct against Kavanaugh has told friends she has no memory of an incident others describe as a sexual assault against her; they say Times editors removed that information 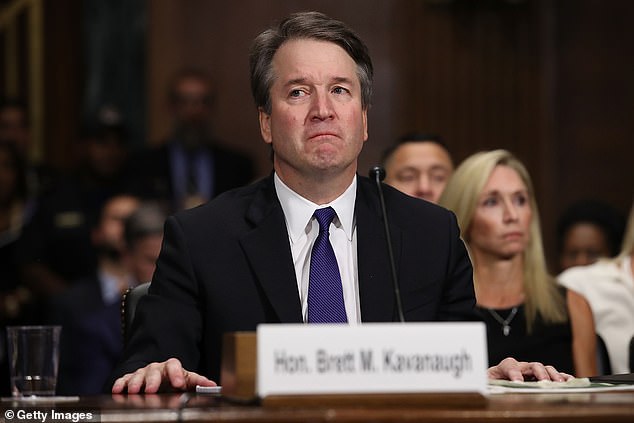 The Times was forced to issue a correction to its ‘bombshell’ article, noting that the woman at the center of the claims does not recall ever being assaulted by Kavanaugh (above last year) 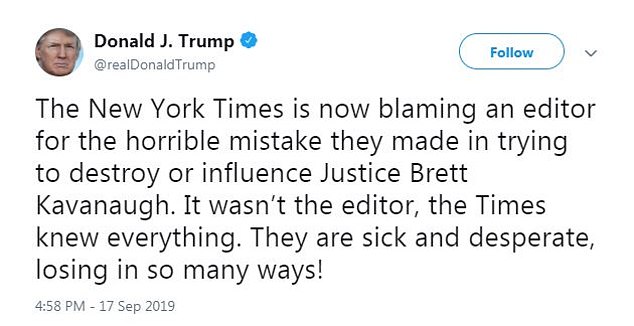 The article, which claimed Kavanaugh in college dropped his pants and a friend pushed his genitals into the hand of a young female student, did not reveal that the female student told friends she did not recall the incident.

‘During the editing process there was an oversight and this key detail, about the fact that the woman herself has told friends she doesn’t remember it, and has not wanted to talk about it, got cut,’ Kelly said on The View. ‘It was an oversight and the Times adjusted it and we’re very sorry that it happened.’

White House Deputy Press Secretary Hogan Gidley also chimed in on the matter, writing in a tweet: ‘Anyone can make honest mistakes. But have you noticed every one of the media’s “mistakes” are never in FAVOR of @realDonaldTrump – just always AGAINST him?’

Earlier on Tuesday, Trump tweeted: ‘The New York Times is at its lowest point in its long and storied history. Not only is it losing a lot of money, but it is a journalistic disaster, being laughed at even in the most liberal of enclaves’

‘It has become a very sad joke all all over the World,’ he wrote.

The Times later corrected the story, noting that the woman has told friends she has no memory of what others say happened. Pogrebin said Tuesday on WMAL radio in Washington that the alleged victim may have been too drunk to recall it. 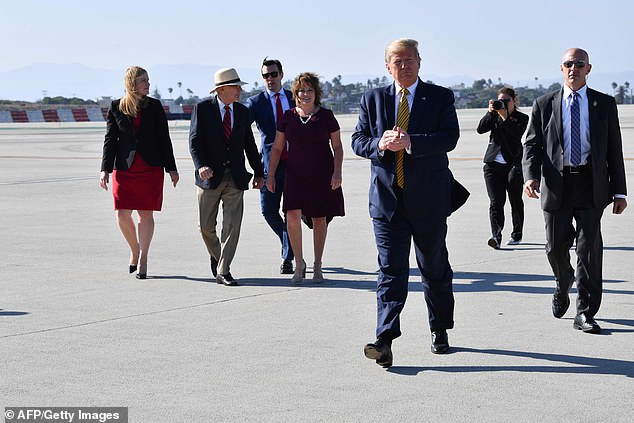 Pogrebin and Kelly reported that Max Stier, a Washington, D.C. lawyer who was once a member of President Bill Clinton’s legal team during the Monica Lewinsky scandal, brought the anonymized claim to light.

Steier and Pogrebin were both classmates of Kavanaugh at Yale.

The president blasted the Times on Monday on Twitter and during a New Mexico political rally.

‘I call for the resignation of everybody at The New York Times involved in the Kavanaugh smear story,’ he told his crowd.

‘They’ve taken the old Grey Lady, so prestigious, and broken her down, destroyed her virtue, and ruined her reputation. She can never recover, and will never return to greatness under current management,’ he added. 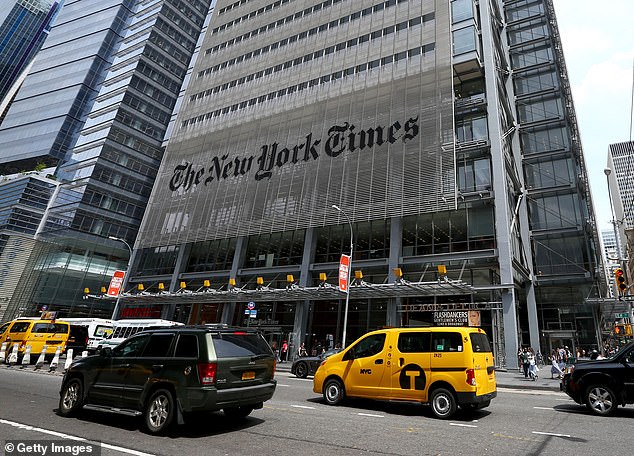 Trump claimed Tuesday that the Times is ‘losing a lot of money’; the newspaper posted $55.2 million in net income last year, a dramatic increase from losses it reported in 2017

This was the correction added to the Times’ story after it went online, including information that the authors say editors deleted before initial publication

‘Look at what they’re doing today to Justice Kavanaugh today. Do you see? The Democrats are calling for his resignation. They’re calling for his impeachment, and the woman involved said she doesn’t know anything,’ Trump bellowed to a crowd of adoring supporters.

He continued that the ‘the New York Times had to put out a major apology, and they had to change their story … and they still want him to be impeached!’

He had written on Twitter earlier in the day: ‘The New York Times should close its doors and throw away the keys. The women mentioned in the Kavanaugh story said she didn’t even remember the event.’

Before departing from the White House on Monday, the president told reporters that the Times doesn’t ‘fact check anymore.’

‘To do that about a Supreme Court Justice is a terrible thing,’ he said. ‘It’s a false accusation.’

Trump on Tuesday also slammed the Times with a claim that the ‘[w]itch Hunt hurt them.’

That’s a reference to a long-promoted story that Trump and his campaign aides conspired to collude with Russian agents to influence the 2016 election. A lengthy report from Special Counsel Robert Mueller ruled out that scenario.

He also quoted Fox News Channel senior political analyst Brit Hume, who said Monday that the story the Times ran Sunday and later corrected ‘is nowhere near the standard that should be met in publishing a story so shocking and damaging about someone – anyone – whether they are a Supreme Court justice or anyone else.’

Pogrebin and Kelly said Monday night in an MSNBC interview that the Times deleted the information contained in the correction – the same facts that weakened the story’s central premise.

‘It did,’ they both confirmed. The alleged Kavanaugh victim’s lack of memory is a detail that appears in their book, but fell to the cutting-room floor at the Times.

‘I think what happened actually was that we had her name – and, you know, the Times usually doesn’t include the name of the victim,’ Pogrebin said. ‘And so I think in this case the editors felt like maybe it was probably better to remove it. And in removing her name, they removed the other reference, to the fact that she didn’t remember.’

In the Twitter feed of its communications department, the Times claimed Sunday that ‘[t]he new revelations contained in the piece were uncovered during the reporting process for the book, which is why this information did not appear in The Times before the excerpt.’

The Times had already apologized for promoting the story with a tweet whose message was that ‘having a penis thrust in your face may seem like harmless fun.’ Minutes after that tweet was posted, the paper issued a retraction, writing: ‘We have deleted an earlier tweet to this article that was poorly phrased.’

The Times later deleted the tweet, adding: ‘It was offensive, and we apologize.’

Pogrebin, it emerged Monday, wrote the initial tweet. She is the daughter of Letty Cottin Pogrebin, a founding editor of Ms. Magazine. 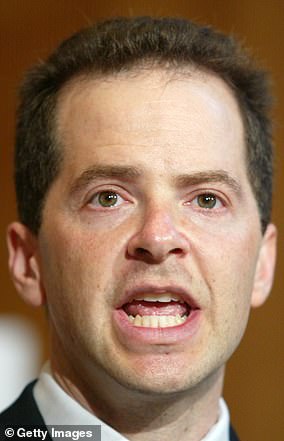 The claim comes from Max Stier who reported seeing the alleged assault to the FBI and to senators. He declined to speak with the Times and has a history of being ‘pitted against’ Kavanaugh – which the Times did not include

The source of the ‘new’ allegation is Max Stier, a heavyweight lawyer with a history of being on the opposing side from Kavanaugh.

Stier did not speak to the Times and it is unclear when he reported his allegation to the FBI but it is likely to be around the time Kavanaugh was nominated by Trump.

The pair were classmates at Yale in the early 1980s. Whether or not they were friends is unclear, but by 1994, they were on opposite sides of a highly publicized legal fight – the Whitewater investigation into Bill Clinton’s real estate dealings when he was president.

Kavanaugh was on the team of investigator Kenneth Starr and Stier was one of Clinton’s lawyers.

A Yale Daily News article from July last year, when Kavanaugh was nominated to the Supreme Court, described it.

‘Those proceedings pitted Kavanaugh against a former Yale classmate, Max Stier ’87, a fellow member of Stiles College who was one of several attorneys representing Clinton during the investigation,’ it read.

The NYT did not include that detail in its report.

It referred to Stier as a ‘classmate’ who now ‘runs a nonprofit organization in Washington.’

Stier is the President and CEO, Partnership for Public Service which works ‘to make government more effective and efficient.’

It is a nonpartisan body.

Stier has kept his politics quiet in the past. In a 2016 article he wrote for The Daily Beast, he defended both Trump and Hillary Clinton for preparing transition teams ahead of the election.

The headline, however, defended only Clinton.

Stier tried last year to get the story to The Washington Post and he also wrote to Senator Christopher A. Coons about it, asking to remain anonymous.

Coons took his concern and wrote to the Judiciary Committee, urging it to investigate. The Washington Post did not write a story about it because, it claimed on Monday, it was contacted by two ‘intermediaries’ working on behalf of Stier.

They did not name him and the Post said it did not have enough information to write the story.