Donald Trump boasts about ‘very good meeting’ on gun legislation with the NRA, Republicans and Democrats – a day after he blamed mass shootings on mental illness

As the nation reels in the wake two mass shootings earlier this month, President Donald Trump says his administration is making progress in passing legislation that will crack down on the gun violence.

Trump took to Twitter to say that his administration has made strides in its legislation to prevent mass shootings by working with Republicans, the NRA and leaders across the political aisle.

‘I am hopeful Congress will engage with my Team to pass meaningful legislation that will make a real difference and, most importantly, Save Lives!’ he added.

Donald Trump tweeted Thursday that his administration is making great strides working with the NRA, Republicans and Democrats to roll out gun legislation that will prevent mass shootings. The president pictured in the Oval Office Thursday 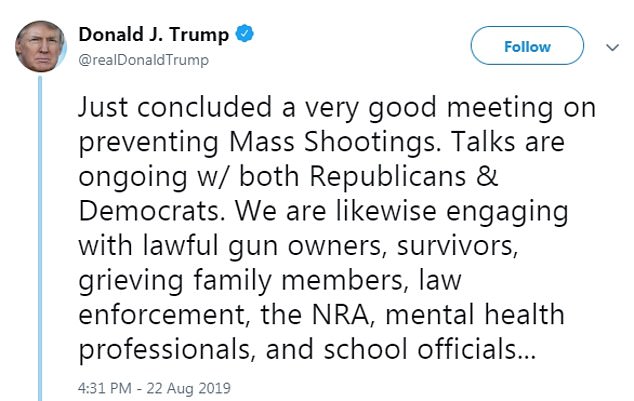 He said: ‘I am hopeful Congress will engage with my Team to pass meaningful legislation that will make a real difference and, most importantly, Save Lives!’

His positive tweets followed after he sparked confusion over his stance on gun background checks on Wednesday.

When asked about the checks, Trump vaguely said he had an ‘appetite’ to close ‘some of the loophoples’ of the law but still wants to make it easy for the ‘mentally ‘sane’ to purchase firearms.

Gun law reform is expected to appear on the Congress’ agenda when lawmakers return to Washington D.C. after Labor Day.

Current U.S. law only requires background checks on guns sold through licensed dealers – and not for gun shows, private sales or fire arms sold online. Sales by authorized dealers account for 78 per cent of all gun sales in the United States.

The House has passed legislation that would close all the loopholes and require universal background checks.

In his Wednesday talk with reporters, Trump reiterated that mass shootings can be blamed on mental health issues. 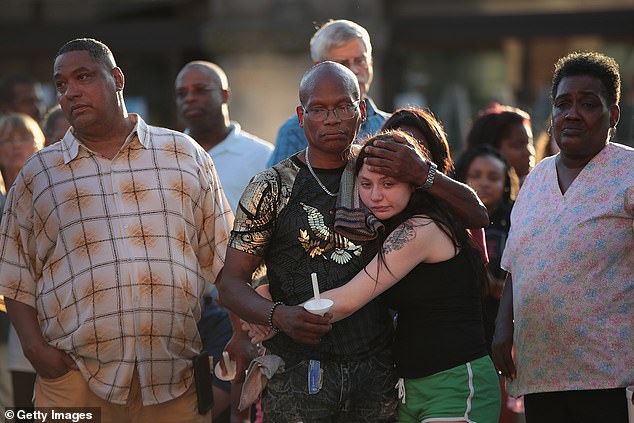 His meetings come after two devastating mass shootings took place within 24 hours in early August, killing 29. Mourners pictured at the scene of the Dayton, Ohio shooting on August 5 that left nine dead

And his latest comments followed reports he told NRA President Wayne LaPierre in a phone call on Tuesday that universal background checks were off the table after two weeks of intense lobbying by the pro-gun group.

Trump denied he made any such comment to LaPierre.

Trump also had been talking with Republican Senator Pat Toomey of Pennsylvania and Democratic Senator Joe Manchin of West Virginia about their bipartisan legislation that would expand background checks to private and online sales.