Donald Trump boasts once more of acing the cognitive test: ‘For me it was easy’

Donald Trump has once again touted his results of a cognitive test, telling Fox News that doctors were astonished at him completing a task that ‘nobody’ performs successfully, and declared his memory to be ‘amazing’.

In an interview aired on Wednesday night with Dr Marc Siegel, a Fox News contributor, the president returned to the issue of the mental faculty test.

On Sunday he was ridiculed online after Chris Wallace, Fox News anchor, told him that the test was actually not that hard.

Trump, evidently rattled by the response, on Wednesday returned again to the issue of cognitive testing.

‘If you get it in order you get extra points.’

The exact test that Trump is referring to is not known.

Wallace said one question was to identify an elephant, Mr. Trump did not contradict him. One popular test, the Montreal Cognitive Assessment, or MOCA, has a drawing of three animals that patients are asked to identify. It is meant to highlight possible problems with thinking and memory.

The MOCA is used in all 31 of the National Institute on Aging’s Alzheimer Disease Centers.

Trump said that the doctors administering the test would then carry on with their questioning, and 20 or 25 minutes later then return to the memory test, and ask again. 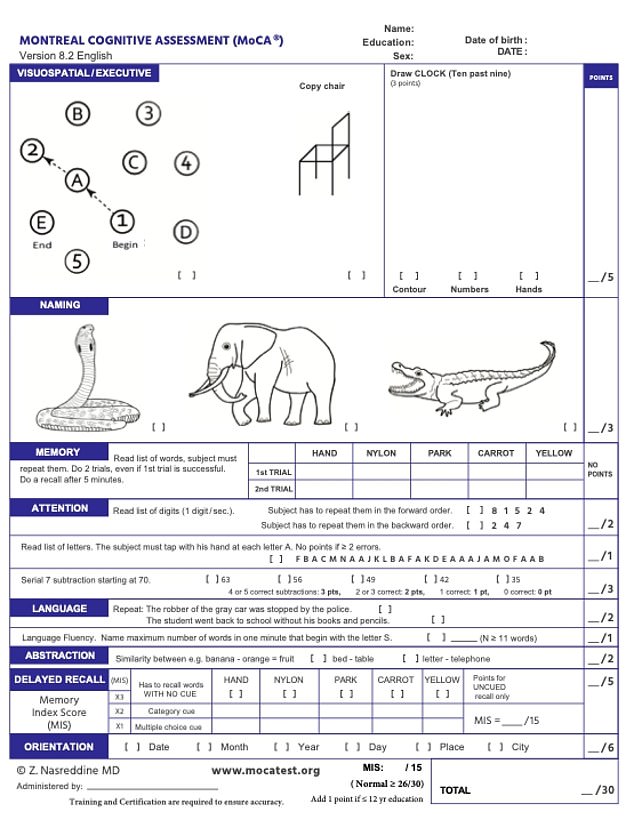 Another part of MOCA is the examiner reading five words at a rate of one per second and asking the subject to repeat them immediately and then again after some time has passed – further suggesting that the president took the MOCA test.

‘They said if you get it in order you get extra points,’ he reiterated.

‘They said, nobody gets it in order. It’s actually not that easy, but for me it was easy.’

The president spelled out the rules for Siegel, telling him that ‘if you repeat it out of order, it’s ok. It’s not as good.’

Siegel, standing in the grounds of the White House, listened intently.

Trump then continued with his story. Trump, 74, said that it was ‘because I have, like, a good memory. Because I’m cognitively there.’

And he insisted that his 77-year-old Democratic rival, Joe Biden, also take the test.

Trump has repeatedly insinuated that Biden, famed for his gaffes, is somehow mentally incapacitated.

‘Because something’s going on. And I say this with respect; it’ll probably happen to all of us, right? It’s going to happen.

‘We can’t take a chance with that happening – when you are dealing with Russia, with China – nobody’s been tougher on China than me, I can tell you that. They’d love to see Joe Biden rather than Trump.’