President Donald Trump is canceling a scheduled pay raise for federal workers due in January, saying the nation’s budget can’t support it.

Trump broke the news in a letter to Congress sent on Thursday.

In the letter he states that the 2.1 per cent across-the-board increase which was scheduled to kick in come January would add $25billion to the federal deficit.

‘We must maintain efforts to put our Nation on a fiscally sustainable course, and Federal agency budgets cannot sustain such increases. I view the increases that would otherwise take effect as inappropriate,’ the President wrote. 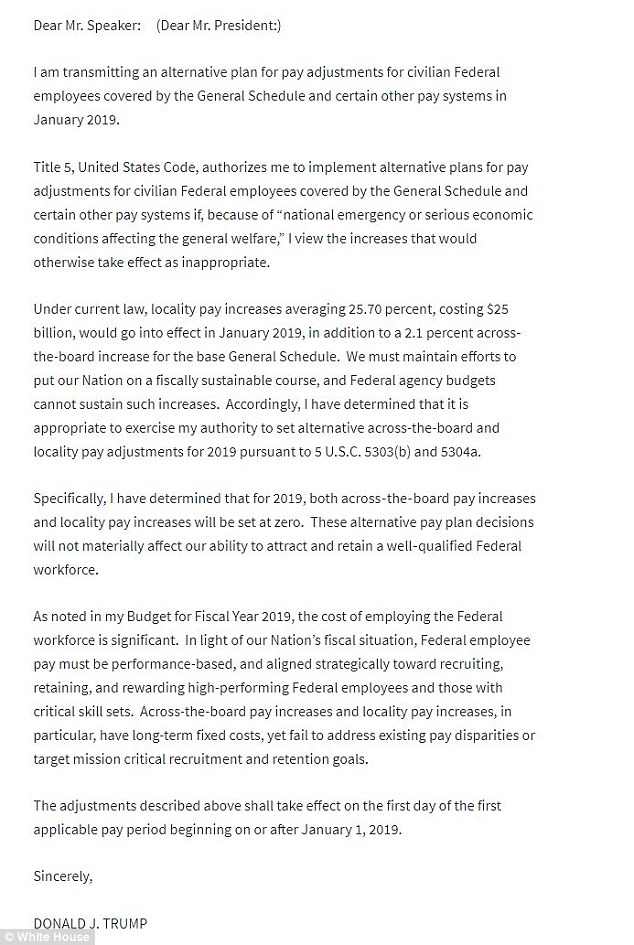 The decision will affect nearly 2.1million federal employees across the nation. About 1.7million of those live in areas outside the DC area, according to The Hill.

However the president added that cancelling the pay raise wouldn’t affect the federal government’s quality of workers.

He wrote that the government would place a focus on ‘recruiting, retaining and rewarding high-performing Federal employees and those with critical skill sets’, according to CNN.

He cited Title 5 of the US Code of Laws in his decision which allows such financial decisions in ‘national emergency or serious economic conditions’ that affect ‘the general welfare’.

Both bills stirred backlash, as critics said that the cuts only benefited corporations and wealthy Americans, but not the every day citizen.

Despite the cancelled pay raise, military members will still see their raise checks roll through with a 2.6 percent pay increase. 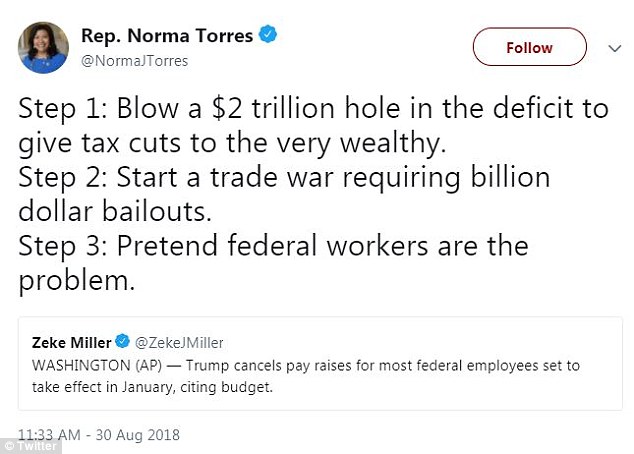 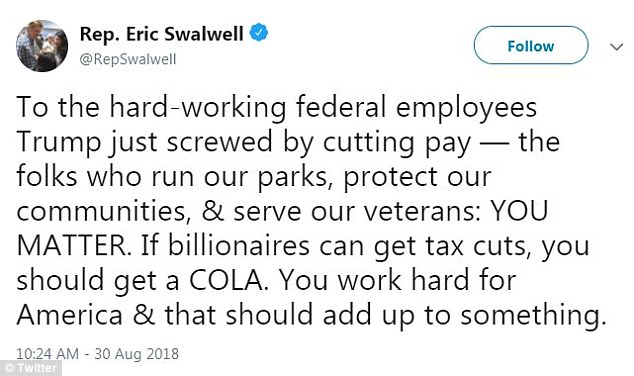 ‘To the hard-working federal employees Trump just screwed by cutting pay — the folks who run our parks, protect our communities, & serve our veterans: YOU MATTER. If billionaires can get tax cuts, you should get a [cost of living adjustment]. You work hard for America & that should add up to something,’ Rep Eric Walwell of California tweeted Thursday.

The American Federation of Government Employees has urged Congress to override the president’s decision.

‘President Trump’s plan to freeze wages for these patriotic workers next year ignores the fact that they are worse off today financially than they were at the start of the decade,’ AFGE National President J. David Cox Sr said.

‘Federal employees have had their pay and benefits cut by over $200 billion since 2011, and they are earning nearly 5 percent less today than they did at the start of the decade,’ he added.

Under the Trump administration the federal deficit has skyrocketed as a result of his mammoth tax breaks that’s expected to reach $1trillion by next year and could grow to $1.5trillion by 2028, according to NBC.