The judge on Monday rejected the Trump administration’s claim of broad immunity protecting current and former senior White House officials from being compelled to testify before Congress, saying that no one is above the law.

In a scathing ruling, U.S. District Judge Ketanji Brown Jackson ruled that McGahn, whose explosive clashes with Trump are cataloged in Robert Mueller’s 448-page report, must comply with a House Judiciary Committee subpoena.

‘Stated simply, the primary takeaway from the past 250 years of recorded American history is that Presidents are not kings,’ Jackson wrote. 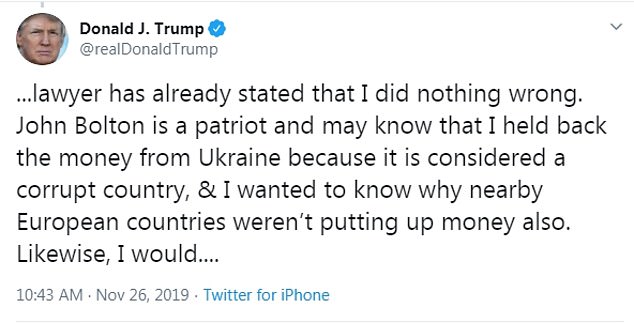 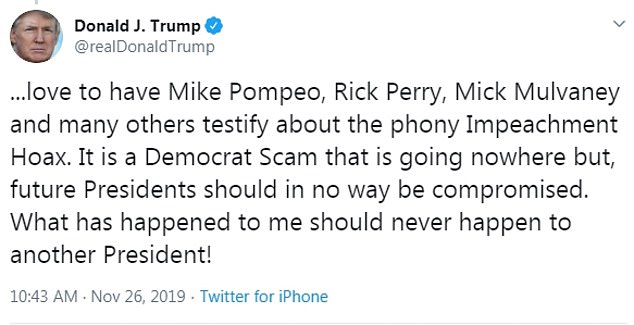 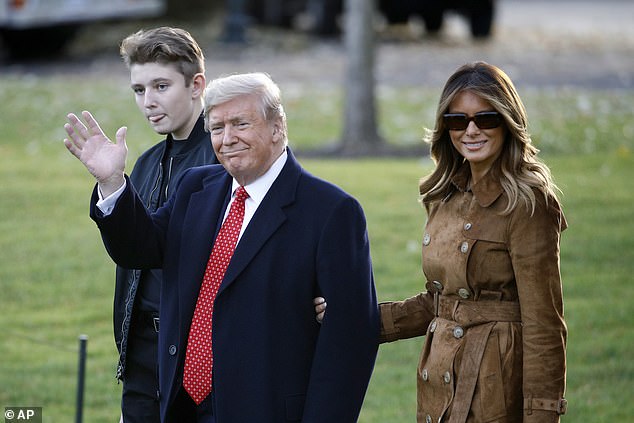 On Tuesday Trump tweeted that he would ‘love’ to have Secretary of State Mike Pompeo, acting chief of staff Mick Mulvaney and other top officials testify in the Democratic impeachment inquiry but claimed he was acting out of ‘principle’ to protect future presidents.

On Tuesday Trump tweeted that he would ‘love’ to have Secretary of State Mike Pompeo, acting chief of staff Mick Mulvaney and other top officials testify in the Democratic impeachment inquiry but claimed he was acting out of ‘principle’ to protect future presidents.

‘It is a Democrat Scam that is going nowhere but, future Presidents should in no way be compromised,’ he tweeted.

Hours after his Department of Justice made clear that he would not in fact be asking them to testify.

McGahn, who left his post in October 2018, last May defied a subpoena from the House Judiciary Committee to testify about Trump’s efforts to impede the now-completed special counsel investigation into Russian interference in the 2016 U.S. election.

The subpoena was issued months before the House opened its impeachment inquiry centering on Trump’s request that Ukraine carry out investigations that could undermine his domestic political adversaries.

The Justice Department, representing McGahn in his former official capacity, said in a court filing that the Judiciary Committee had agreed to a seven-day temporary delay in enforcing the subpoena.

If the judge does not immediately impose that delay, the department would file an emergency application on Wednesday at the U.S. Court of Appeals for the District of Columbia Circuit, the administration lawyers said.

The department lawyers wrote in their filing on Tuesday that the judge’s ruling was only the second in U.S. history requiring a senior presidential adviser to testify before Congress and that the dispute raises ‘significant and difficult separation-of-powers questions.’ Separation of powers is a term that refers to the U.S. Constitution assigning different authority to the executive, legislative and judicial branches of the U.S. government.

McGahn’s personal lawyer said on Monday that he would comply with the subpoena if it is not blocked.

Charles Cooper, a lawyer for Trump’s former national security adviser John Bolton, indicated that the judge’s ruling would not pave the way for Bolton or one of Bolton’s former aides, Charles Kupperman, to testify in the impeachment probe.

Bolton, who left his White House job in September, has joined a separate lawsuit filed by Kupperman seeking a ruling on whether they must comply with a House subpoena. Cooper represents Kupperman and Bolton. 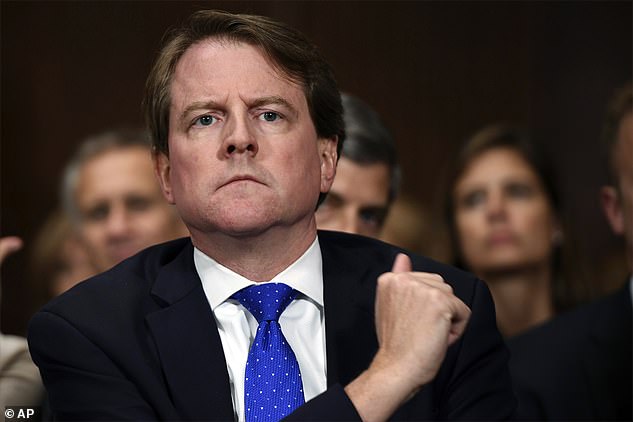 Cooper said Kupperman’s lawsuit will move forward, noting that the McGahn subpoena did not concern national security or foreign affairs.

‘Therefore, any passing references in the McGahn decision to presidential communications concerning national security matters are not authoritative on the validity of testimonial immunity for close White House advisors,’ Cooper said.

At a State Department news conference, Pompeo sidestepped a question on whether he would testify in the impeachment inquiry.

House Democratic leaders have focused their impeachment inquiry on Ukraine, but have discussed pursuing a broader count of obstruction of Congress among any articles of impeachment – formal charges – brought against Trump. McGahn’s testimony could bolster that part of their inquiry.

The Judiciary Committee sued McGahn in August to try to enforce the subpoena.

‘Given that the House’s impeachment inquiry is proceeding rapidly, the Committee has a finite window of time to effectively obtain and consider McGahn’s testimony,’ lawyers for the committee said in a court filing last week.

If the Justice Department’s request for a longer pause is granted, the dispute over presidential powers likely would not be decided for months. During that time, McGahn would not have to testify.

Trump’s claim that he would ‘love’ to let officials testify is not the first time he has used such language.

Last year he said he himself would ‘love’ to testify to special counsel Robert Mueller – something Trump never did, instead working with his lawyers to provide written answers to questions.

Pompeo got the chance to jump at the president’s stated claim that he would like him to testify about a half an hour after Trump’s tweet, when the top diplomat was asked whether he would testify at a press conference.

‘When the time is right all good things happen,’ Pompeo said cryptically, with a smile.