U.S. President Donald Trump has dubbed Prime Minister Scott Morrison a ‘man of titanium’ in their first meeting in the president’s Oval Office.

In a reference to George W. Bush’s ‘man of steel’ label for John Howard, the last Australian leader to be honoured with a full state visit to the United States, Mr Trump picked a harder metal.

‘You know, titanium’s much tougher than steel,’ he told reporters at the White House on Friday as Mr Morrison and their wives Melania Trump and Jenny Morrison looked on.

‘He’s a man of titanium, believe me, I have to deal with this guy.

‘You might think he’s a nice guy, OK, he’s a man of real, real strength and a great guy.’

While Morrison and Trump hit it off immediately, things were somewhat frostier between Morrison’s wife Jenny and First Lady Melania.

Former model Melania, 49, looked tense as she greeted Jenny, 51, with an awkward kiss on the cheek.

The pair also looked a little uncomfortable as they stood next to each other for a photo.

Earlier, the Trumps welcomed the Morrisons to America with full military pomp and circumstance on the South Lawn of the White House. 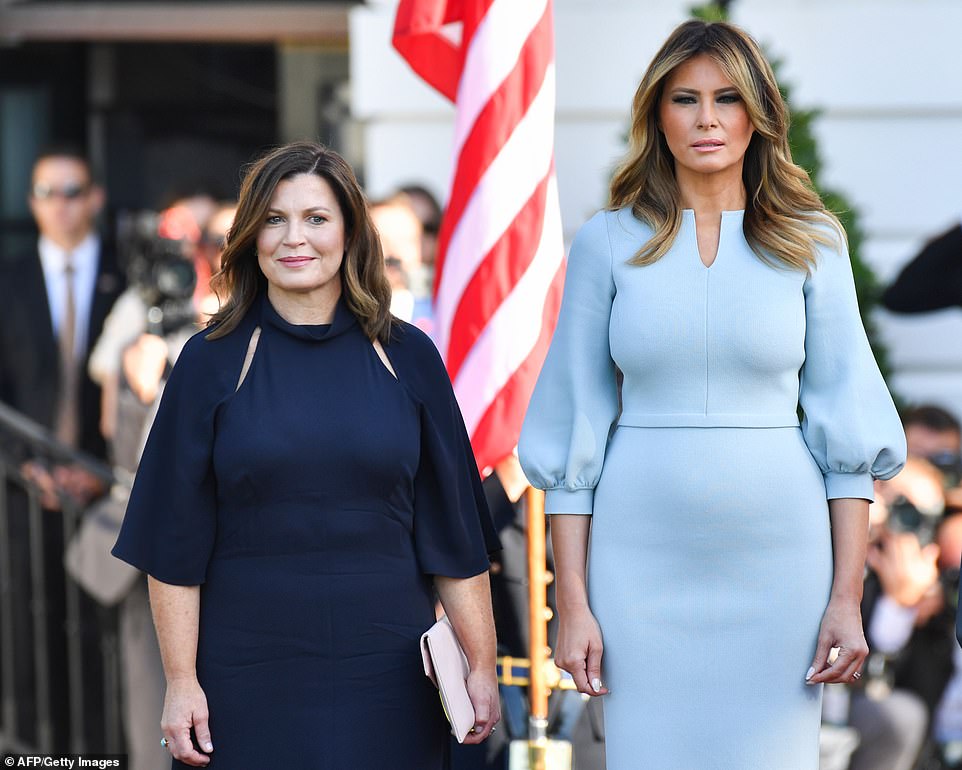 ‘Today we vow to carry on the righteous legacy of our exceptional alliance,’ Mr Trump told the gathered crowd of about 4500 people.

That alliance stretched back over more than a century of joint military operations, both leaders noted.

‘From the woods of Le Hamel to the jungles of Southeast Asia to the dust of Tarin Kot in Uruzgan, and now the waters of the Strait of Hormuz, Australians and Americans have always stood together,’ Mr Morrison said.

The joint operations in the waters south of Iran are a major topic of conversation for the leaders and their officials during the top-level meeting on Friday.

Mr Trump said he thought the US had taken a ‘very measured and calibrated approach’ towards the Middle Eastern nation. 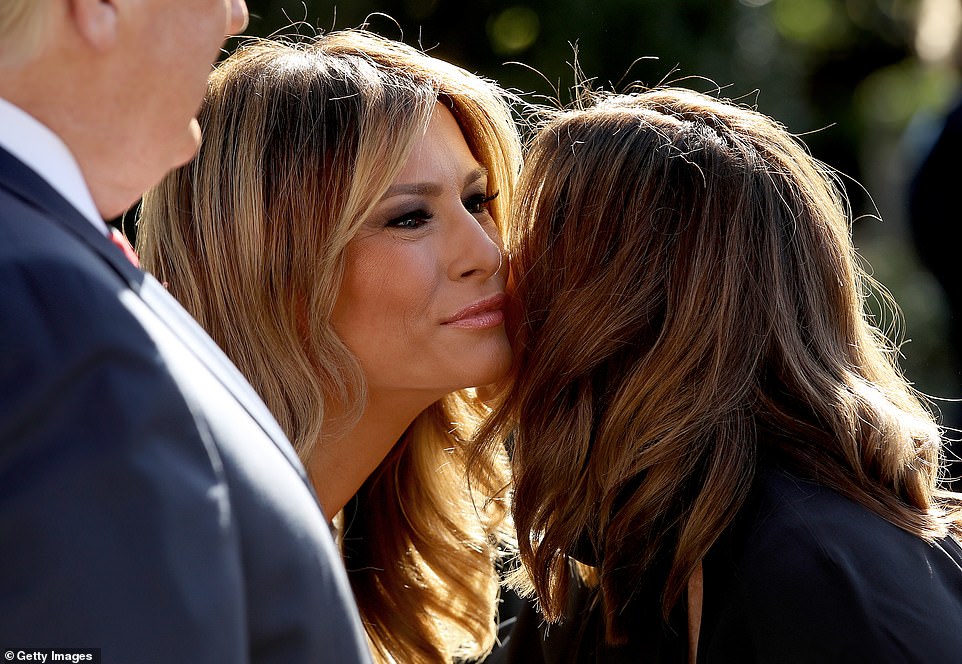 Mr Trump then repeatedly suggested he could make the call to go to war against the Middle Eastern nation right then and there with Mr Morrison and the media pack in the room.

‘The easiest thing I can do, in fact I can do it while you’re here, is say, ‘go ahead fellas, go to them’. And that would be a very bad day for Iran,’ he said, after announcing stronger economic sanctions on Iran.

Australia has so far agreed to a limited contribution to the US-led freedom of navigation operation in the Strait of Hormuz.

The talks between the leaders are also expected to encompass trade and the tensions with China, co-operation on the US plans for space missions to the moon and Mars, and rare earth exports.

‘For a century we have done what true friends do – stick by each other,’ Mr Morrison said at the welcome ceremony.

‘Whatever lies ahead in this century, I know that Australia and the United States will go on to meet it with the same courage, the same daring, and the same unbreakable bond that has defined the first century of mateship.’

He leaves a visual reminder of this long friendship, giving Mr Trump a statue of WWII soldier Leslie ‘Bull’ Allen carrying a wounded American off the battlefields of Papua New Guinea. 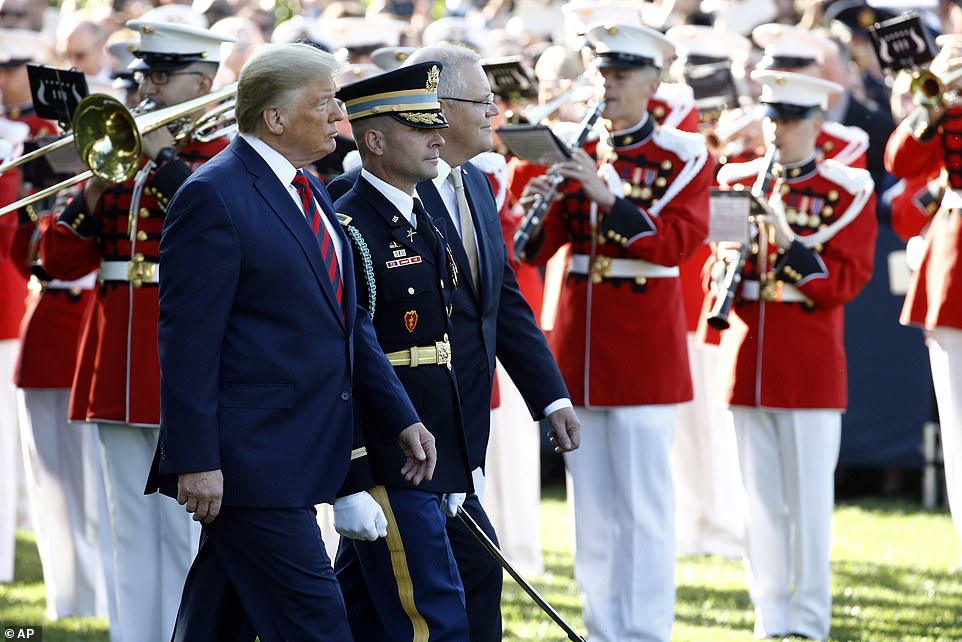 Trump and Morrison reviewed troops as a Marine band played

The pair have spoken about Corporal Allen’s story twice previously and for Mr Morrison, it symbolises the indelible bonds that tie the nations together.

Later Mr Morrison will be honoured, first with a luncheon for about 220 guests hosted by Vice-President Mike Pence and Secretary of State Mike Pompeo at the State Department, and then with an official state banquet in the gardens of the White House.

He is expected to delve further into the important economic ties at the State Department lunch, noting the US has had a trade surplus with Australia – selling more Down Under than it buys – since the Truman administration.

‘All US exports enter Australia tariff-free and quota-free. You can’t get a better deal than that,’ he will say, according to speech notes.

President Trump welcomed Morrison to the White House on Friday, praising the ‘long-cherished and unwavering friendship’ and ‘exceptional alliance’ the two nations have enjoyed for more than a century. 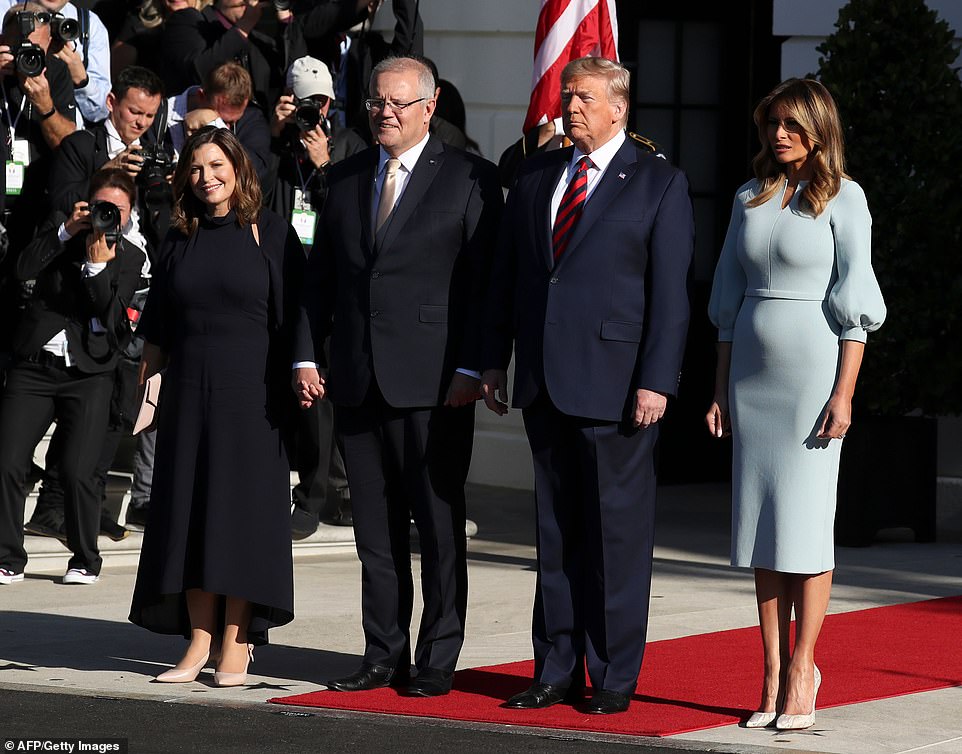 ‘Last year our nations commemorated “100 years of Mateship” since our gallant service members fought together in World War I,’ Trump boasted, after the two men reviewed troops, witnessed a 19-gun salute, posed for selfies with people on a rope line, hugged a few children and heard both national anthems.

A fife and drum corps in replica Revolutionary War-era uniforms marched across the lawn, led by a drum major carrying a gleaming, sharpened pike.

Trump highlighted ‘our shared fights against the menace of fascism, communism and radical Islamic terrorism.’

‘Thanks, mate!’ Morrison told him as the rare ceremony unfolded on the South Lawn. ‘You won’t find a more sure and steadfast friend,’ he said, adding that ‘Australians and Americans understand each other like few other people.’

Morrison praised the United States, saying ‘the world is a better place because of this country living out its moral purpose.’ 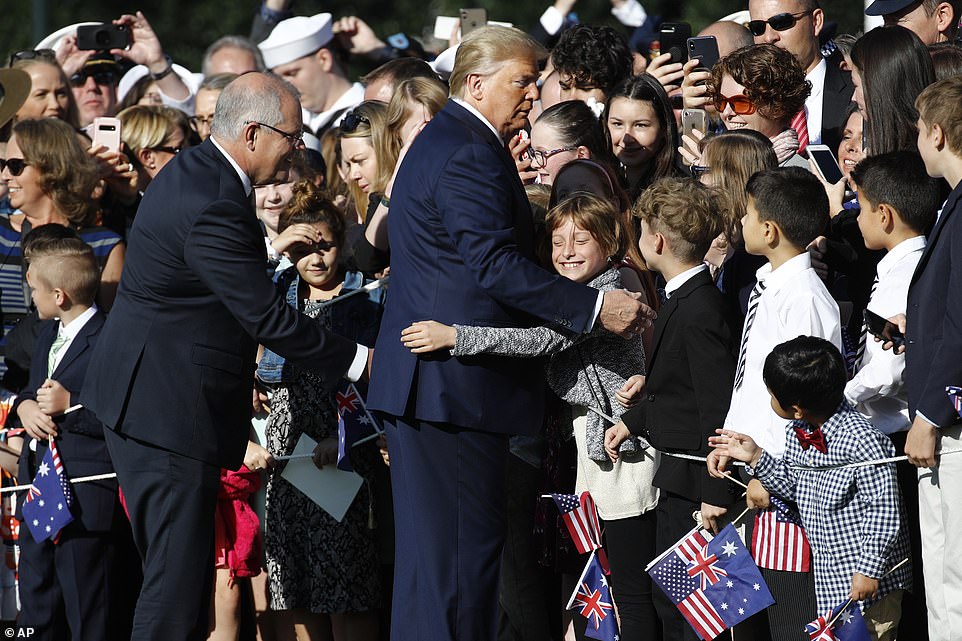 President Trump hugs one of the children in the crowd 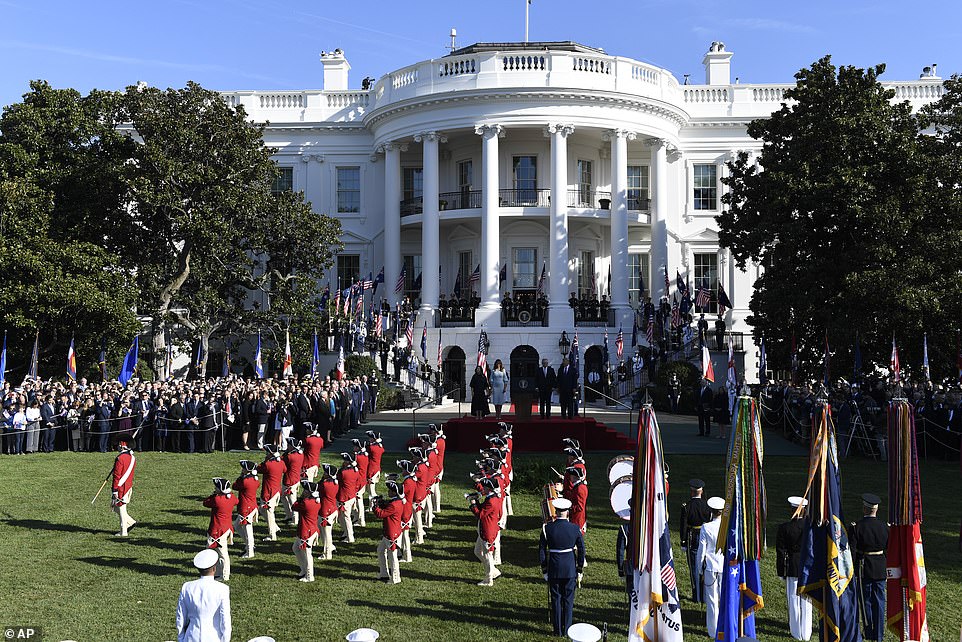 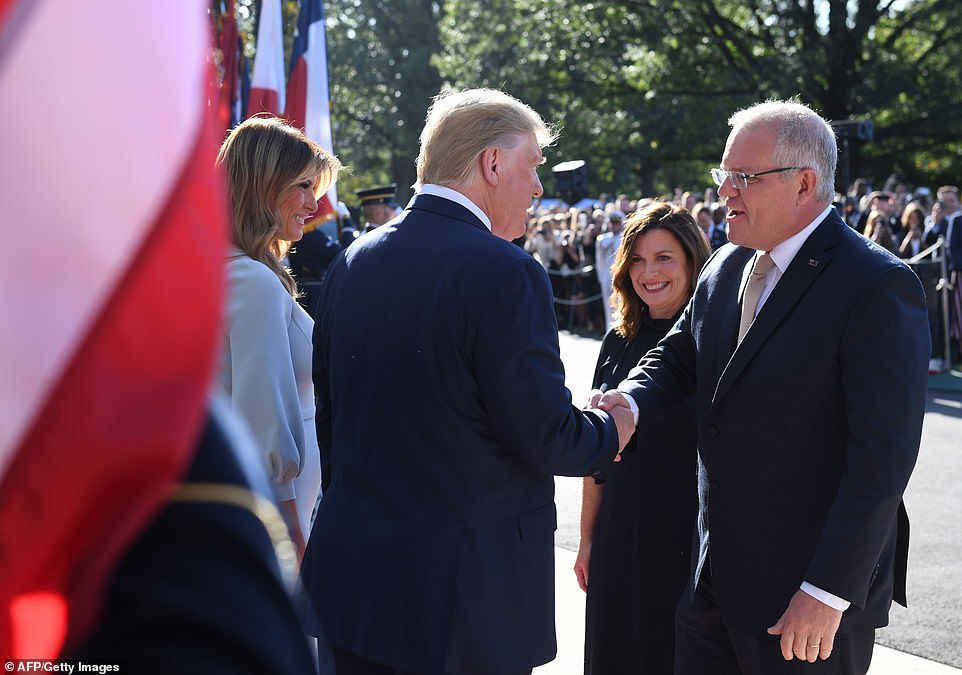 Melanie Trump wore a pale blue, long-sleeved dress by Australian designer Scanlan Theodore that retails for $800 to the ceremony and Jenny Morrison wore a navy dress.

A military honor guard holding American and Australian flags stood along the White House portico – waving in the morning breeze – as the leaders exchanged greetings and shook hands with some of the guests.

One person in the crowd was spotted wearing a bright blue suit jacket made of a ‘Keep America Great 2020’ banner. 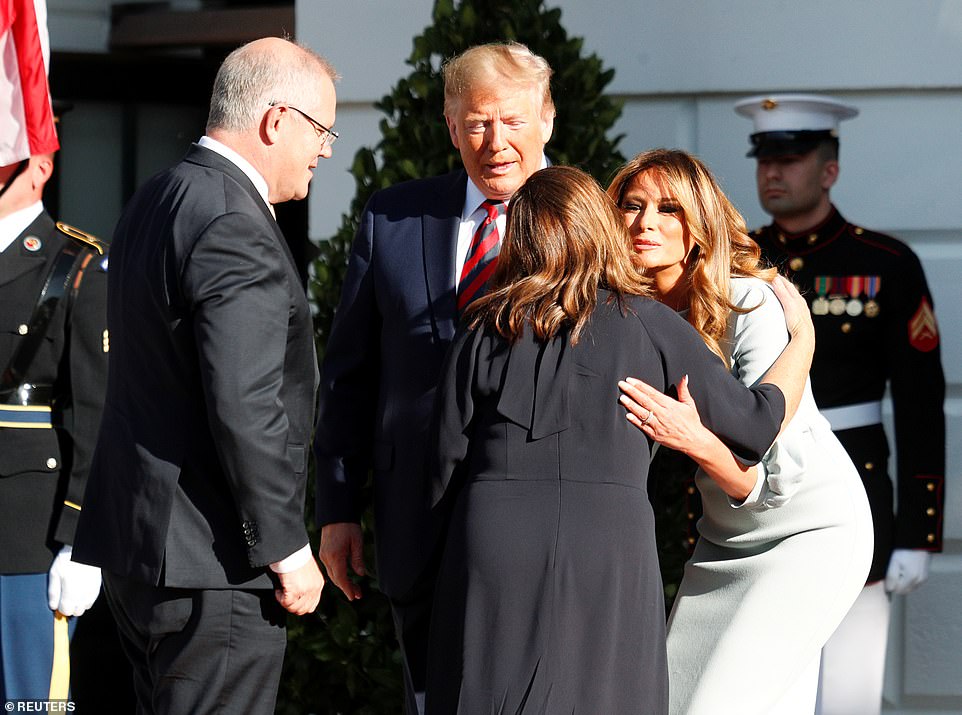 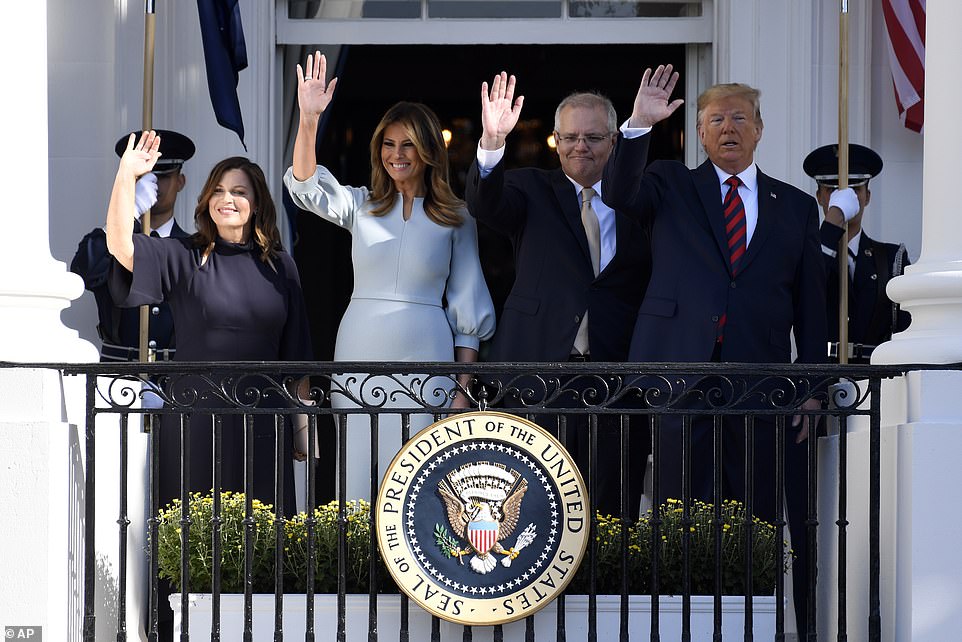 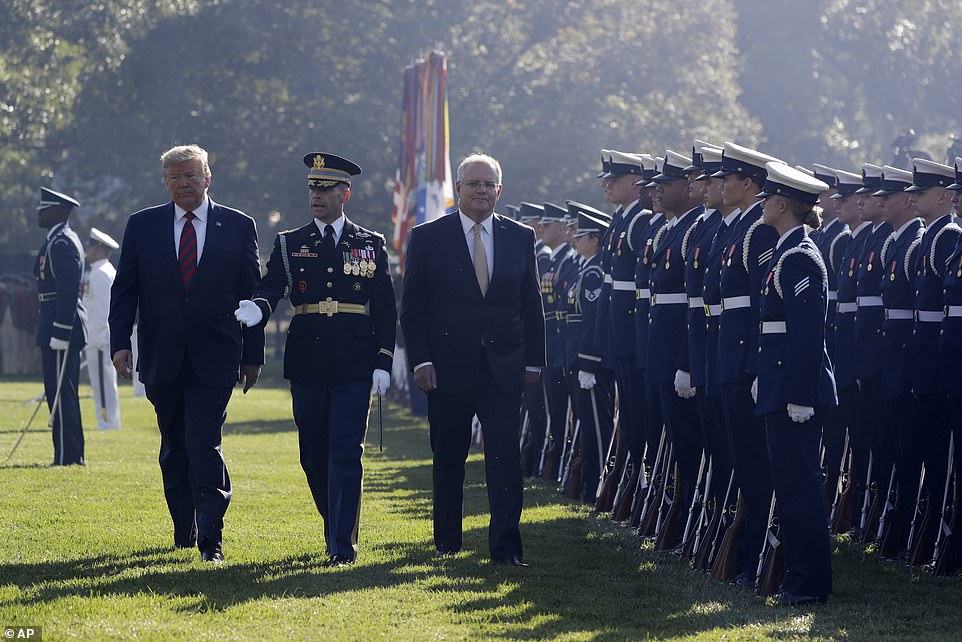 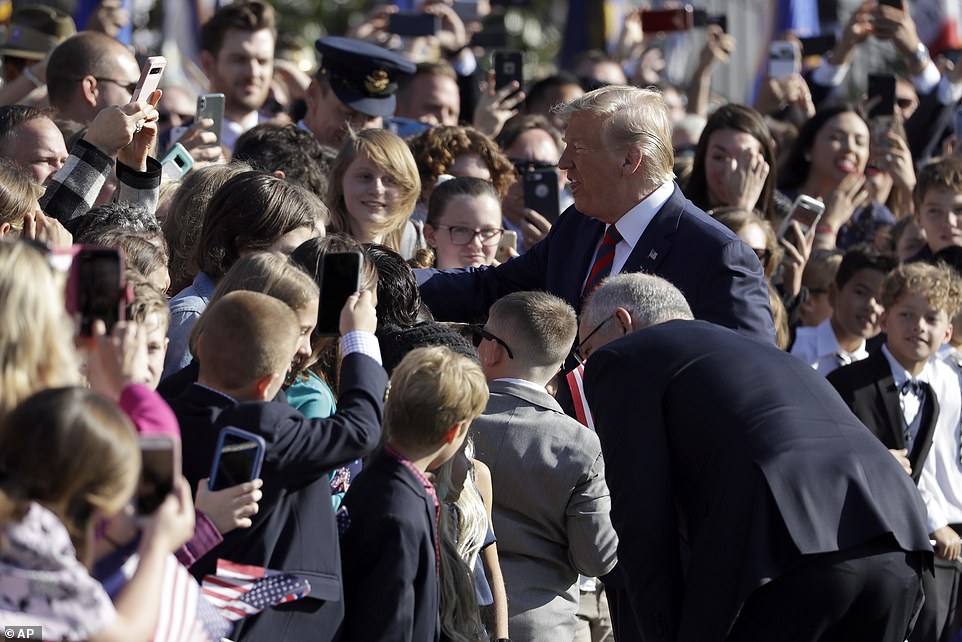 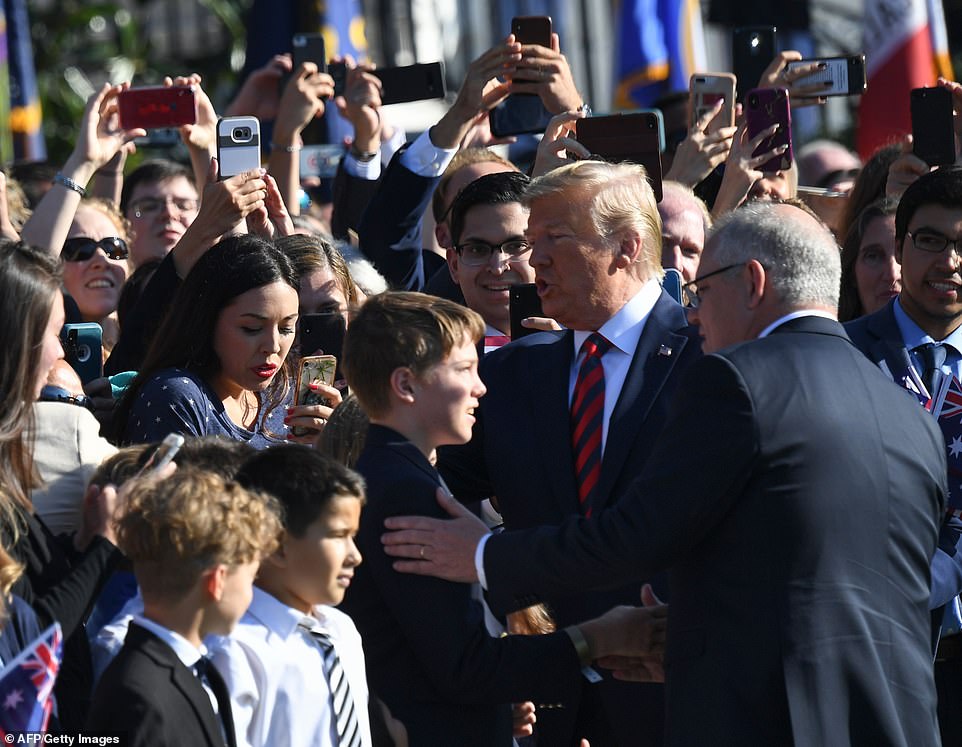 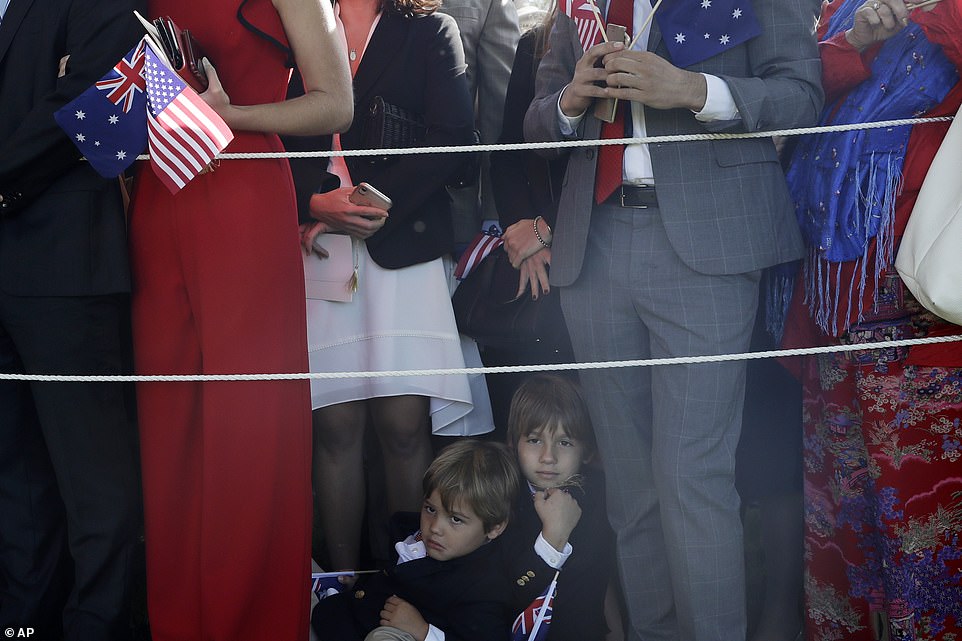 Some of the kids rested during the 30 minute ceremony 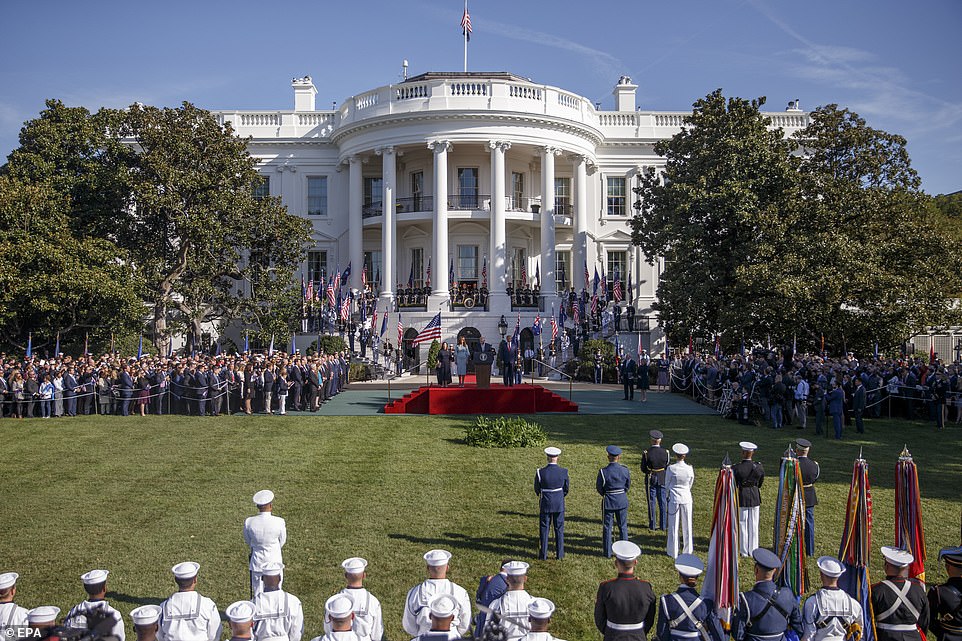 After the ceremony concluded, the two couples walked up the White House portico steps to wave to the crowd. Trump offered a thumbs up. Guests cheered and waved Australian and American flags at them as the Trumps and the Morrisons waved back.

While the two leaders emphasized international cooperation, friendship is also on the menu during what is only the second state dinner of the president’s administration.

9:30 am: The two couples participate in the official guest book signing and leader gift exchange

10 am: Bilateral meeting between Trump and Morrison

11:45 am: Press conference with Trump and Morrison

7 pm: The Trumps welcome the Morrisons for the state dinner

7:05 pm: Reception with Trumps and Morrison in the White House

Friday’s schedule has the two men meeting for bilateral talks and holding a joint press conference – a day that will be capped off with a formal black tie dinner beneath the stars in the White House Rose Garden.

Morrison will also be honored with a luncheon at the State Department hosted by Secretary Mike Pompeo.

In addition to a formal welcome and meetings in Washington D.C. on Friday, the Trump and Morrison will travel to Ohio on Sunday to tour a new, Australian-owned manufacturing facility there.

The plant is owned by Australian billionaire Anthony Pratt, who is a big Trump supporter.

Their talks on Friday will focus on a range of issues including military and economic with a focus on the Pacific region.

Trump’s trade war with China will likely come up as China is Australia’s leading trade partner and the U.S. one of its oldest allies – putting the country in an awkward position.

The leaders plan to sign a memorandum of understanding to further U.S. and Australia cooperation in space and on the use of rare earth minerals, according to a senior administration official. 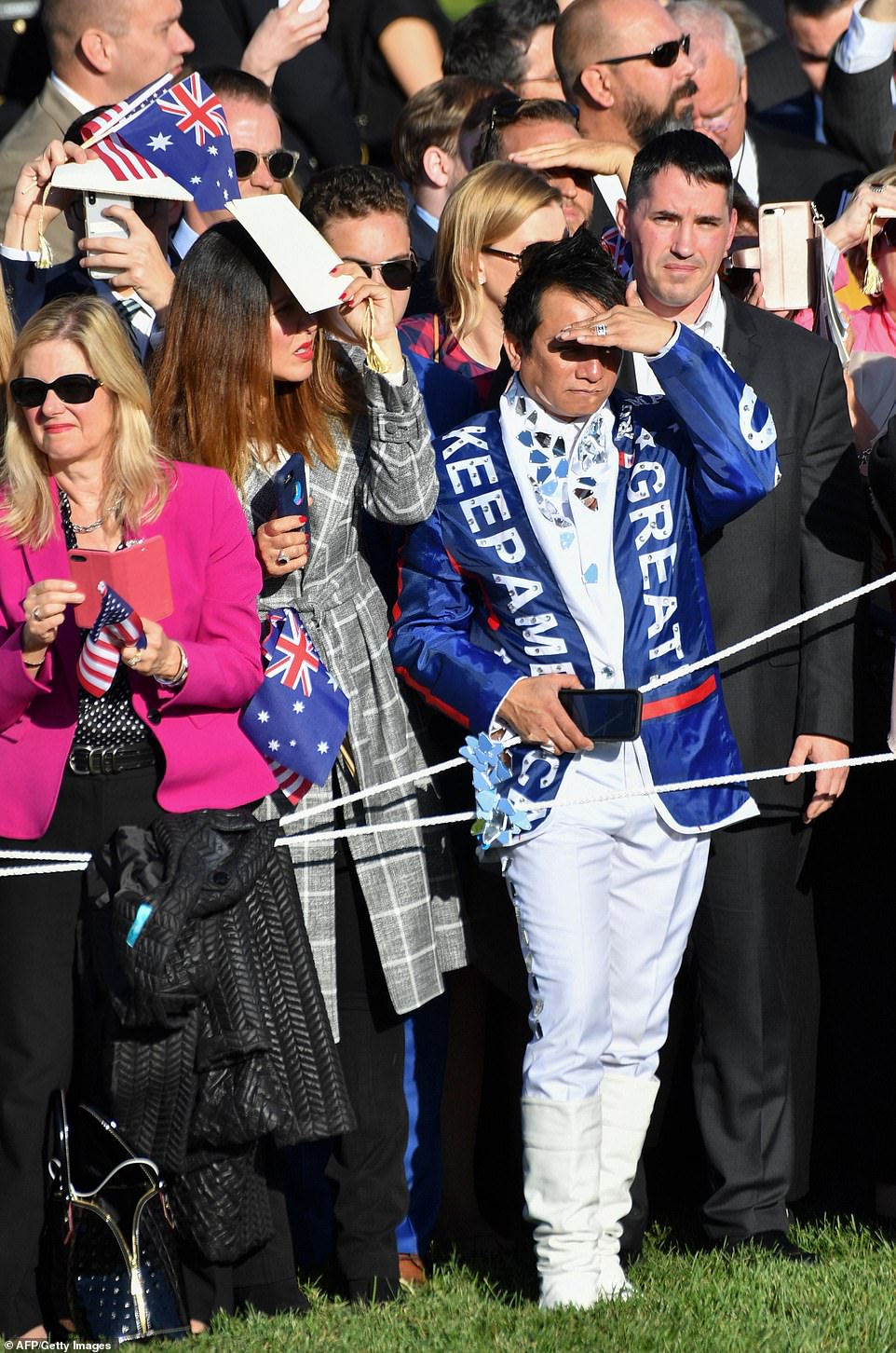 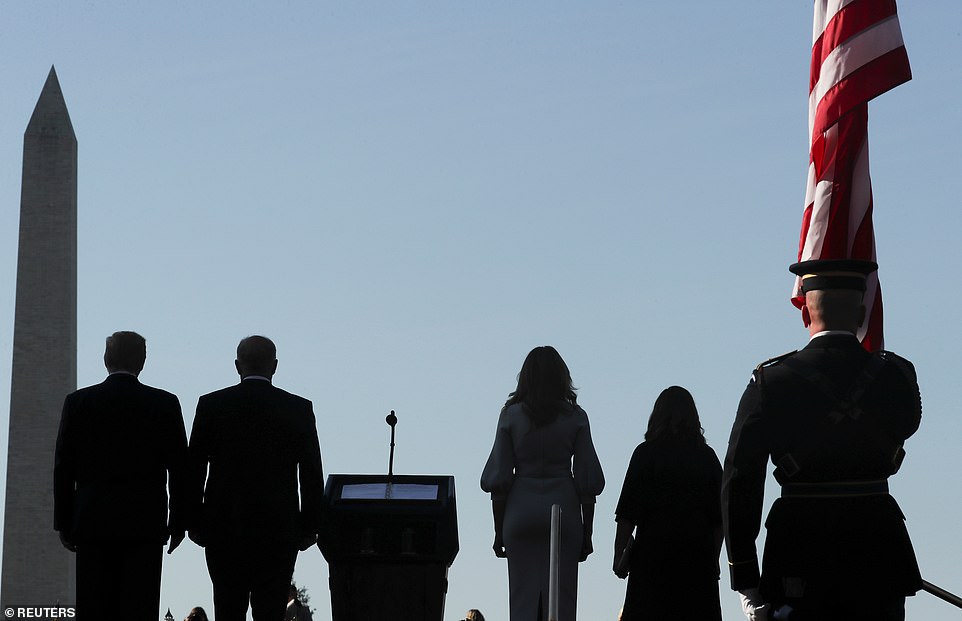 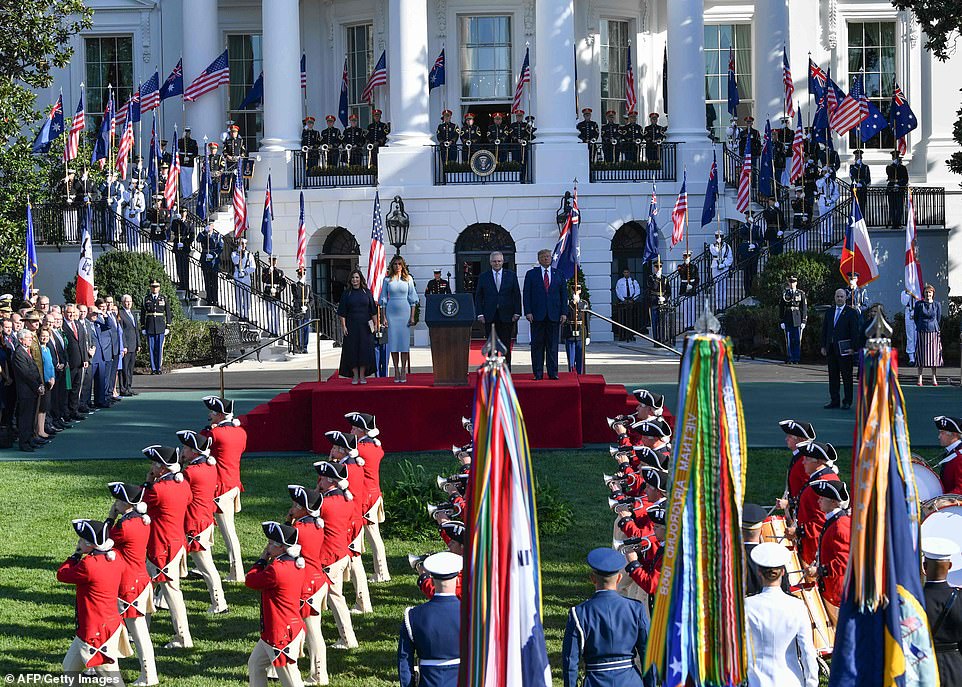 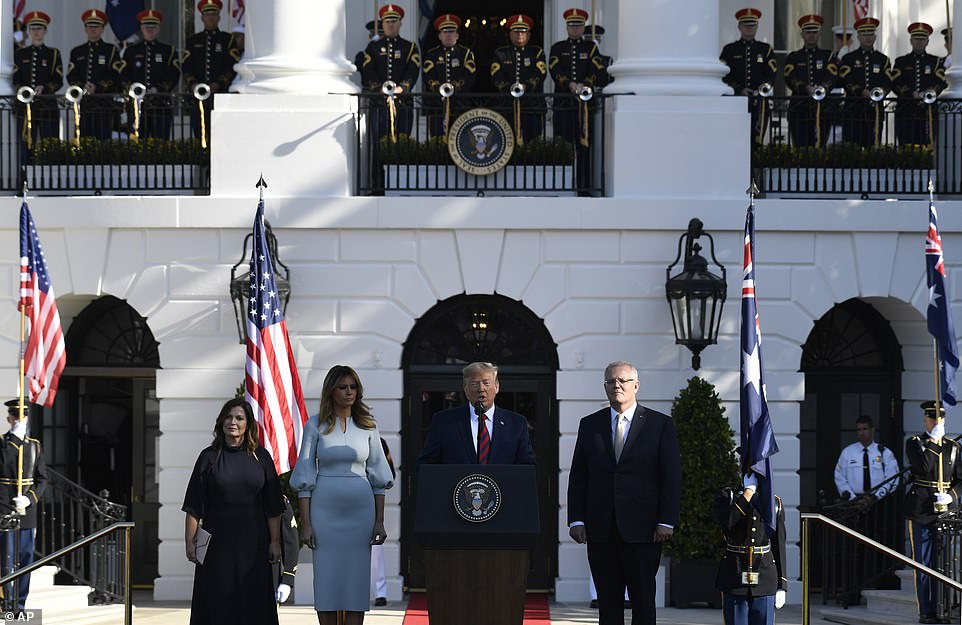 About 4,500 people attended Friday’s ceremony, which included a 19-gun salute and military bands playing the American and Australian national anthems 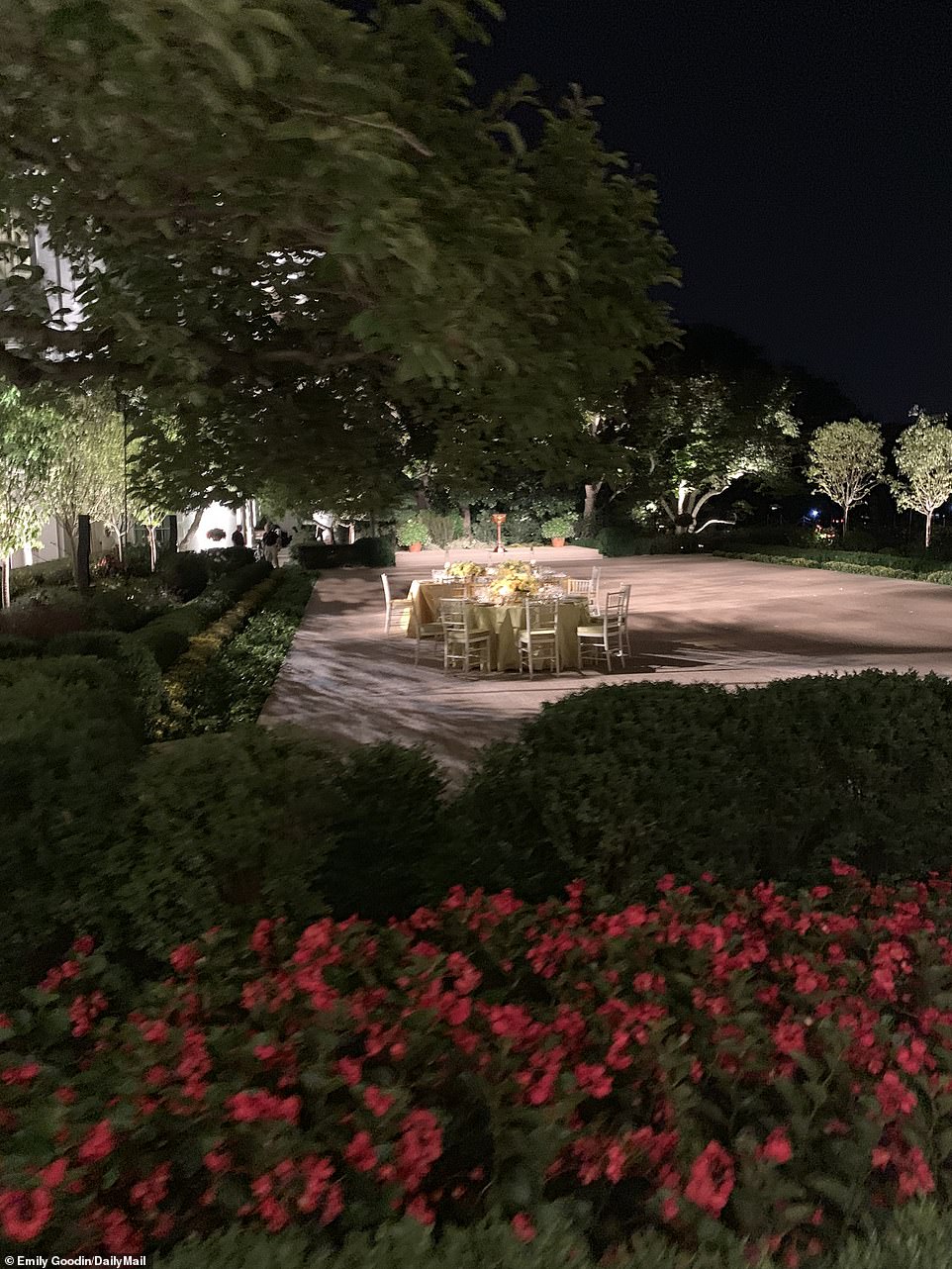 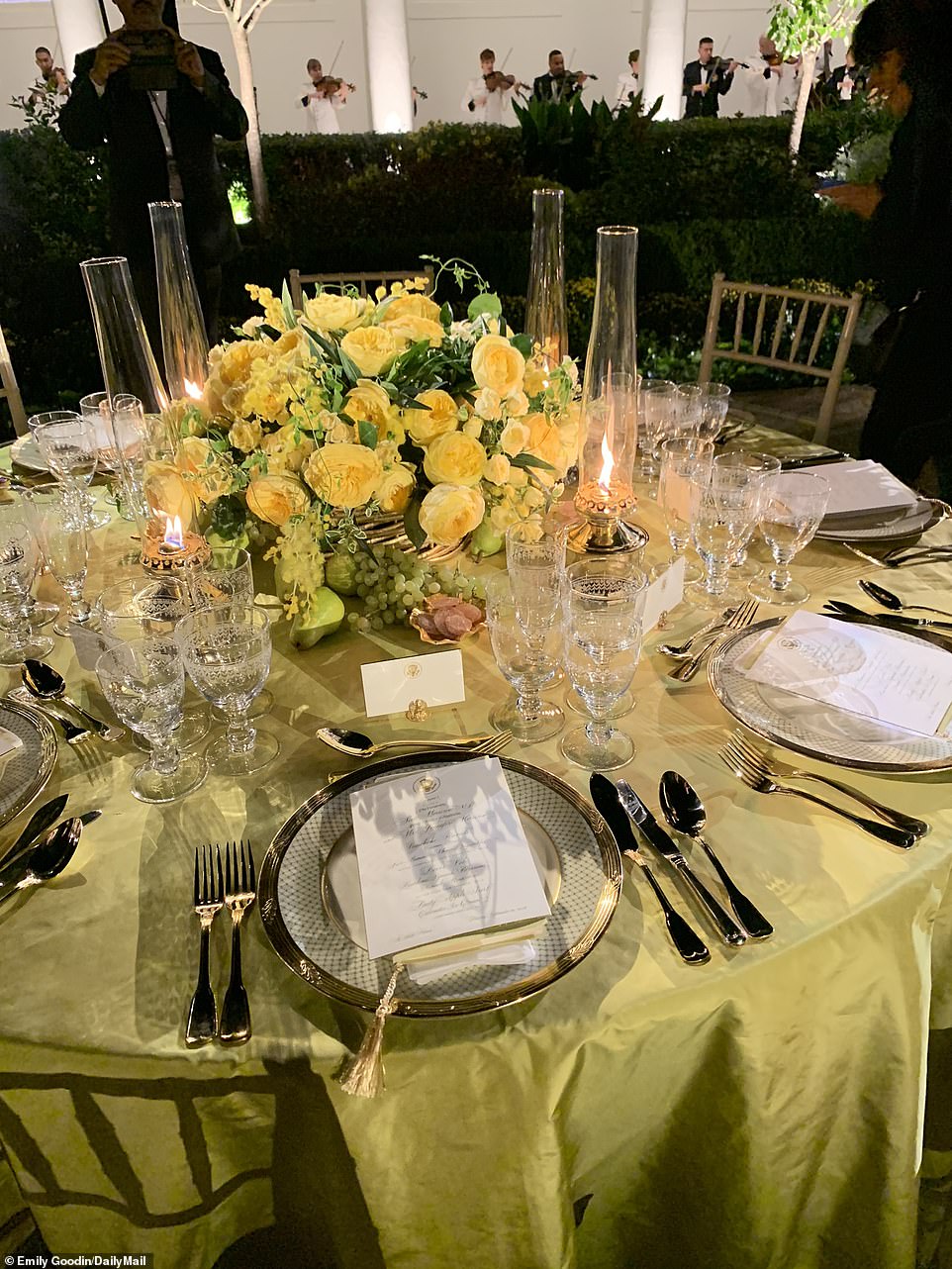 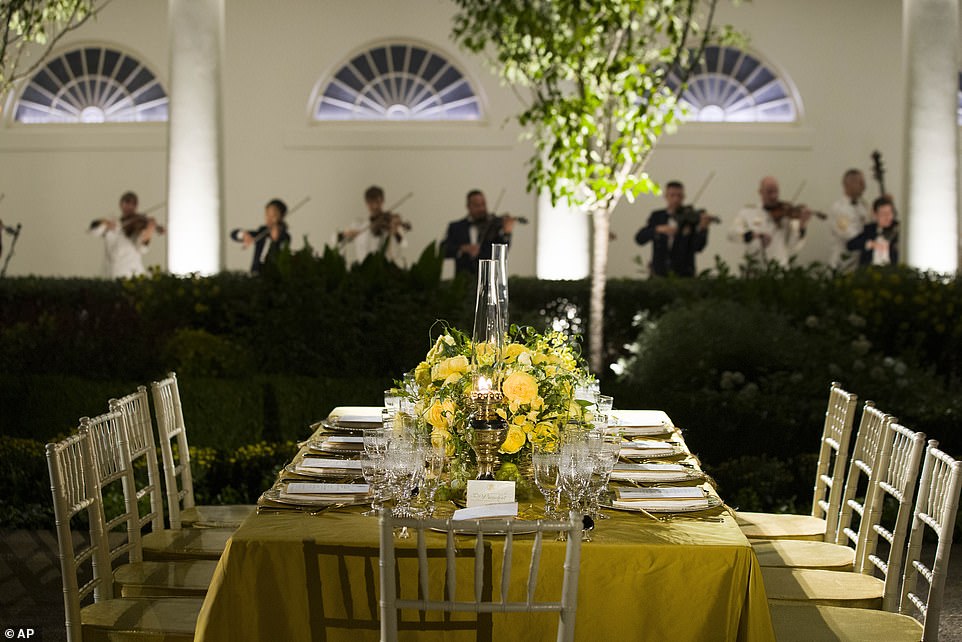 Climate change and the situation with Iran will also be on the agenda.

‘Australia has been a tremendous partner for us as it relates to Iran’s nuclear program and towards some of the challenges we face with Iran,’ a senior administration official said Thursday on a call with reporters previewing the visit.

Australia joined the American-led effort last month to protect ships from Iranian threats in the critical Strait of Hormuz.

After the day of meetings, the two couples will gather in the White House Rose Garden where Australia’s national colors set for the state dinner.

Green and gold dominated the decor and table settings for the outdoor event, which will take place just steps away from the Oval Office.

The colors decorating the dinner stage were derived from the national flower of Australia, the golden wattle, which has a yellow flower and green foliage.

Flowers heavily dominate the decorations – an appropriate choice given its Rose Garden location. American varieties of yellow and white roses will set the back drop for the evening.

The dinner centerpieces feature more than 2,500 roses from California in shades of yellow and Australia’s national floral emblem, the golden wattle. 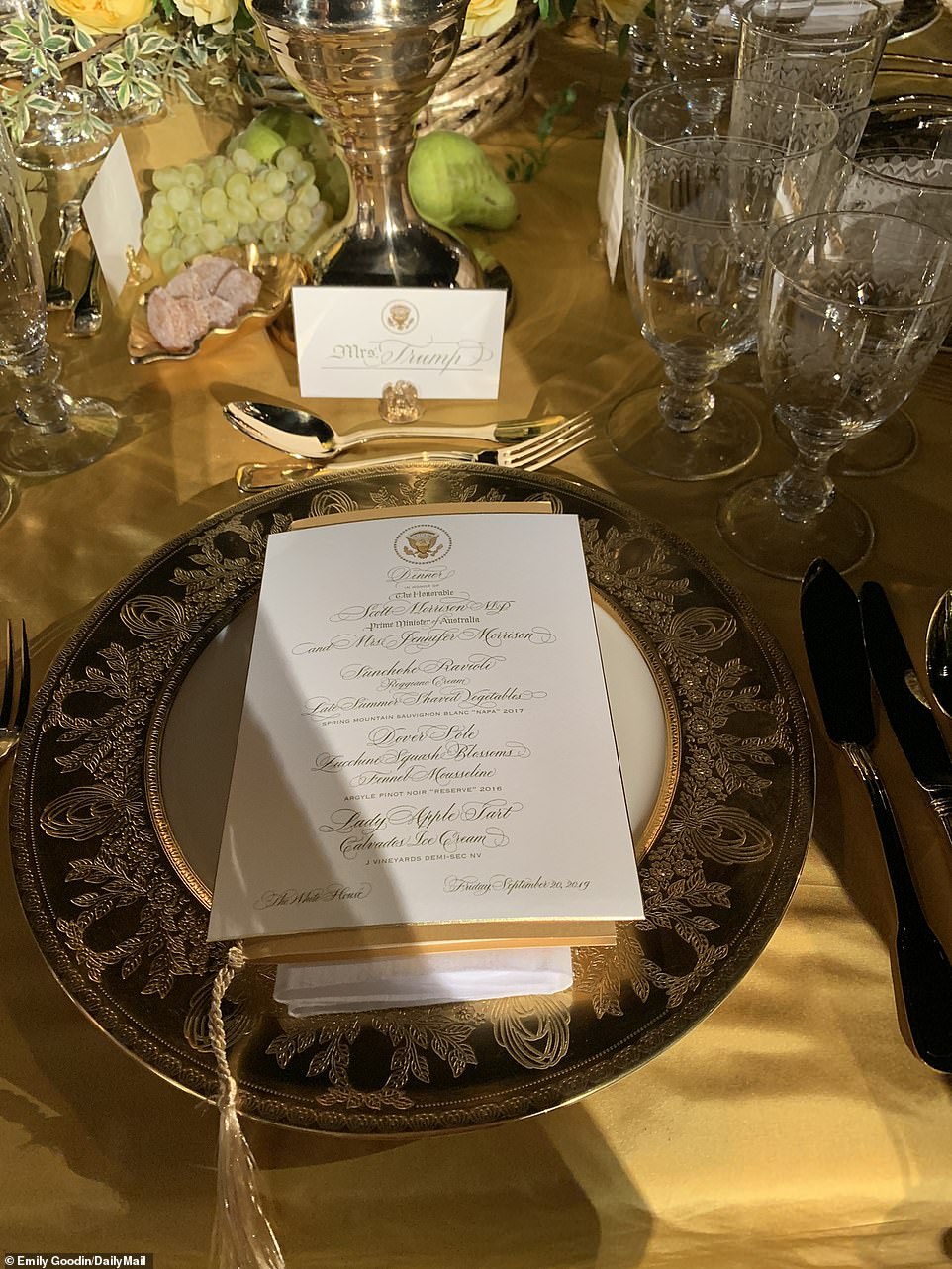 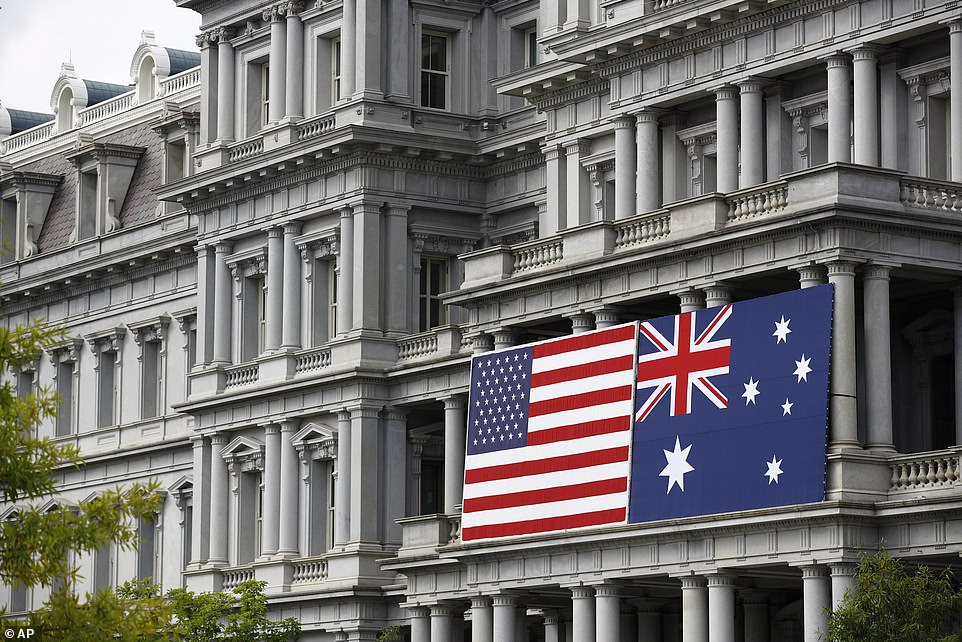