Donald Trump greets supporters in Bedminster WITHOUT a mask

President Donald Trump stopped to say hello to about 50 supporters Sunday who had gathered at an intersection in Bedminster, New Jersey several miles down the road from his private golf club.

Trump – who was not wearing a mask to prevent the spread of the coronavirus – got out of his black SUV and was handed a stack of ‘Keep America Great’ baseball hats to toss into the crowd.

The president stayed about six feet away from the group and could be heard telling them ‘thank you.’

President Trump passed out hats to a group of 50 or so supporters in Bedminster, New Jersey on Sunday 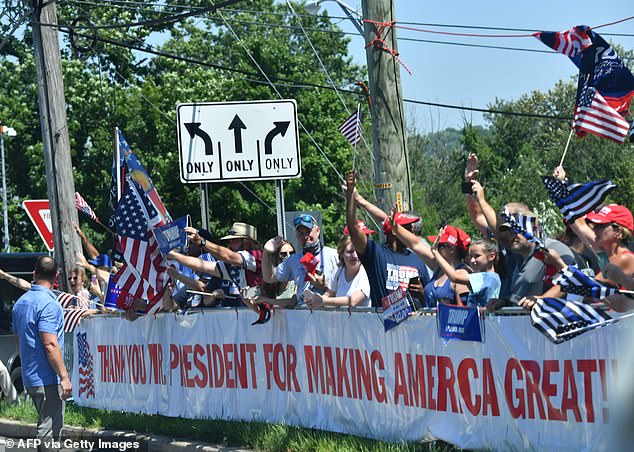 Supporters were gathered behind a large white banner that said ‘Thank you Mr. President for keeping America great!’ 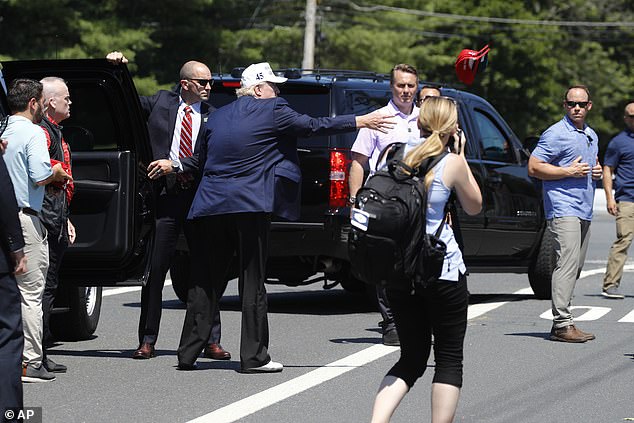 President Trump is seen tossing out hats to supporters on Sunday. He made a brief stop in the town of Bedminster to greet the crowd 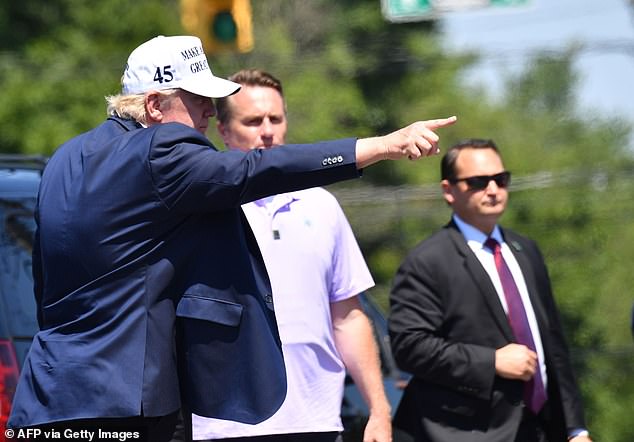 President Trump points at a crowd of supporters he greeted in Bedminster, New Jersey on Sunday, several miles away from his private golf club 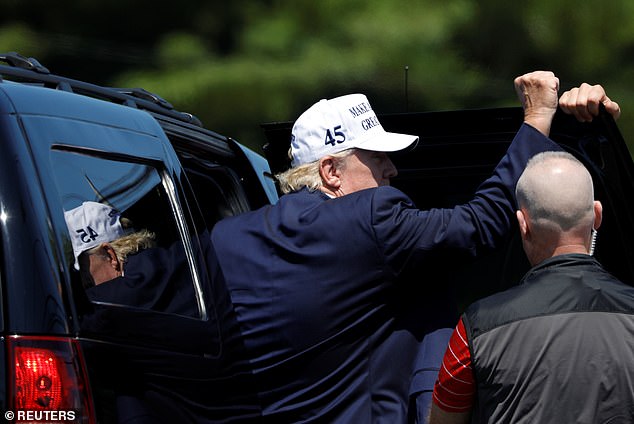 President Trump is captured getting back into his SUV after spending a minute thanking supporters Sunday afternoon in Bedminster, New Jersey

The minute-long campaign stop was the first time the president left his Trump National Golf Club Bedminster all weekend.

On Saturday the White House sent out a picture of Trump and National Football League great Brett Favre who had golfed together that day.

‘Brett LOVES Wisconsin, Mississippi and Minnesota. A good golfer – hits it LONG!’ the president tweeted about the experience Sunday.

Trump also was the ‘special guest,’ the White House said, at a fundraiser put on by America First Action, a group technically not associated with any candidate, Saturday night.

Reporters were not invited in to cover the event.

The president also spent portions of Sunday on Twitter, complaining about media coverage and the Democrats.

‘The Trump Campaign has more ENTHUSIASM, according to many, than any campaign in the history of our great Country – Even more than 2016. Biden has NONE! The Silent Majority will speak on NOVEMBER THIRD!!! Fake Suppression Polls & Fake News will not save the Radical Left,’ the president also said.

The president is expected to travel back to Washington, D.C. Sunday evening.