President Trump hinted that pardons for his associates Paul Manafort and Roger Stone could be on the table.

On Friday night, Stone appeared on Fox News Channel and told host Tucker Carlson that serving time during the pandemic could kill him. 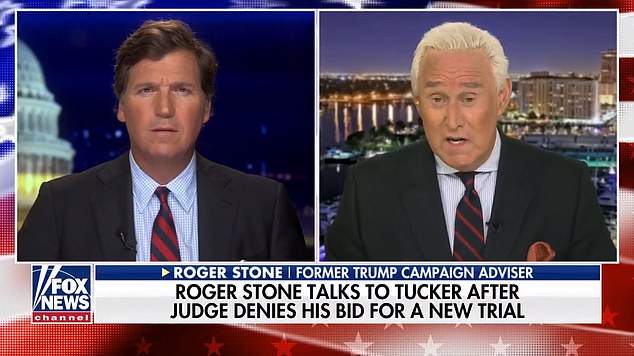 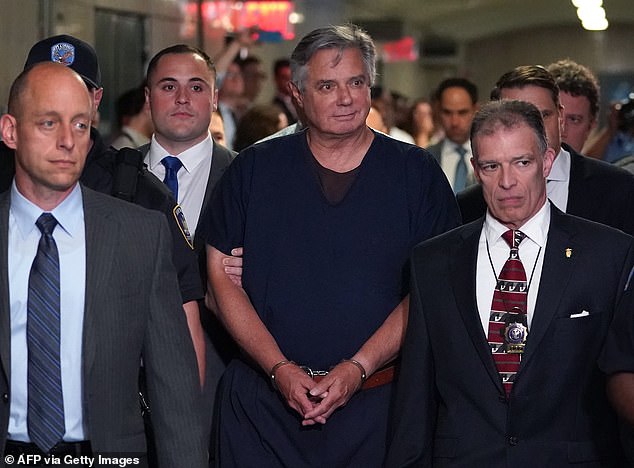 Lawyers for Paul Manafort want him home from a Pennsylvania federal prison, citing health concerns due to the coronavirus pandemic

‘So at this point, the judge has ordered me to surrender in two weeks and at 67 years old with some underlying health problems, including a history of asthma, I believe with the coronavirus it is essentially a death sentence,’ Stone said.

On Thursday, U.S. District Judge Amy Berman Jackson ruled against Stone’s legal team’s argument that he should get a fresh trial due to bias against Stone from one of the jurors, a forewoman who was anti-Trump.

‘The assumption underlying the motion – that one can infer from the juror’s opinions about the president that she could not fairly consider the evidence against the defendant – is not supported by any facts or data and it is contrary to conrolling legal precedent,’ Jackson wrote. ‘The motion is a tower of indignation, but at the end of the day, there is little substand holding it up.’

Stone is a longtime political adviser to Trump and worked on his 2016 presidential campaign for the first few weeks.

He was sentenced to more than three years in prison for witness tampering and making false statements to investigators working on Special Counsel Robert Mueller’s Russia probe.

Last week, lawyers for Manafort, who is serving a seven-year sentence at a federal facility in Loretto, Pennsylvania for bank fraud and tax evasion, asked the Bureau of Prisons director if he could serve his sentence at home ‘for the duration of the on-going COVID-19 pandemic,’ according to a letter obtained by CBS News.

Manafort’s lawyers Todd Blanche and Kevin Downing pointed out that their client is 71-years-old and suffers from ‘high blood pressure, liver disease, and respiratory ailments.’

Manafort was hospitalized for several days in December for a heart condition and again in February with influenza and bronchitis, the lawyers said.

‘Even though there are no reported cases of COVID-19 at FCI Loretto at this time, given the growing number of cases in Pennsylvania and increasing challenges in testing inmates and staff potentially exposed to COVID-19, it is only a matter of time before the infection spreads to staff and inmates at FCI Loretto, at which time it may be too late to prevent high-risk inmates, such as Mr. Manafort, from contracting the potentially deadly virus,’ the lawyers wrote.

Scott Taylor, the spokesman for the Federal Bureau of Prisons, wouldn’t comment on Manafort’s case specifically, though pointed to guidance from Attorney General Bill Barr that asked federal prisons to prioritize home confinement due to the pandemic.

Already, Trump’s former lawyer Michael Cohen, will be released from federal prison early and be confined at home instead.

Same goes for Michael Avenatti, the ex-lawyer of adult film star Stormy Daniels, who Trump is accused of giving hush payments to so that she would not detail a sexual encounter she had with the then-2016 presidential candidate.

Cohen was one of the brokers of that deal.

At the briefing, Trump railed against how his associates were treated by the top-tier of the FBI, though didn’t lash out at individuals, like former FBI Director James Comey, by name.

He also said General Michael Flynn, his first national security adviser who had to resign over lying back contact he had with Russia amid the 2016 campaign, was treated terribly.

‘And what they did to General Flynn and you know it and everybody knows it was a disgrace,’ Trump said.