Donald Trump signed a highly complimentary letter of recommendation for the father of one of Jeffrey Epstein’s sex slaves, DailyMail.com can reveal.

The president wrote the note for Virginia Roberts’ dad, Sky Roberts in 2003 after he worked at Mar-a-Lago, his Florida estate, as a maintenance man.

Trump said Roberts was a ‘most valuable employee’ and signed it with his distinctive signature.

He also noted that Roberts, who was relocating to Colorado, would be ‘eligible for rehire’ were he to return to Florida.

The document shows another connection between Epstein and Trump who were reportedly each other’s ‘wingmen’.

The two partied together in the 1990s and Trump has called Epstein a ‘terrific guy’ but they are believed to have fallen out because Epstein was accused of sexually assaulting a girl at Mar-a-Lago. 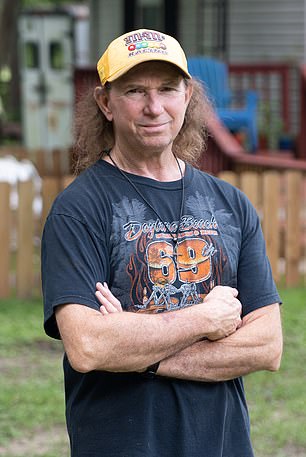 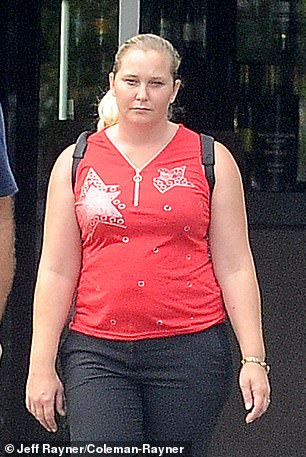 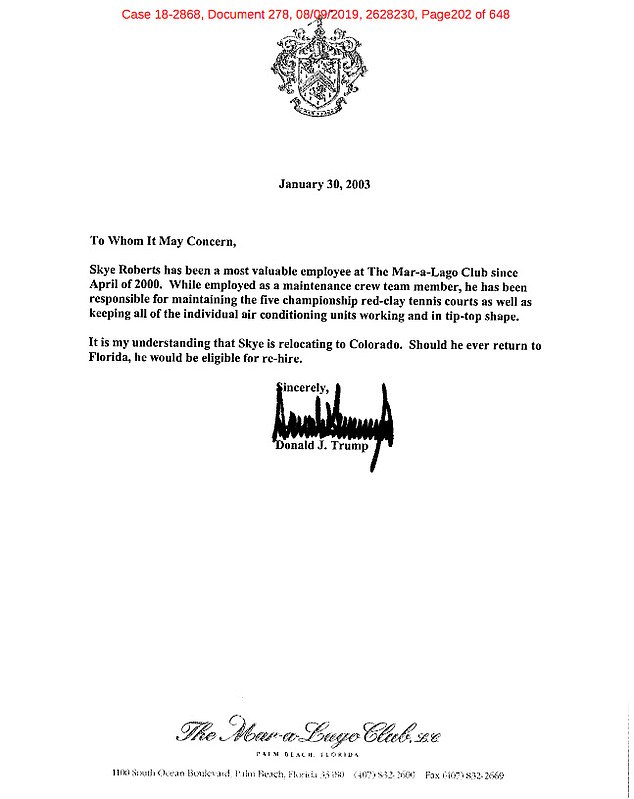 The letter, obtained exclusively by DailyMail.com, was written on headed notepaper with the Mar-a-Lago crest on the top and dated January 30, 2003. It  noted that Roberts, who was relocating to Colorado, would be ‘eligible for rehire’ were he to return to Florida

Roberts’ daughter also worked at Mar-a-Lago as a towel girl in the locker room and it was there in 2000 that she claimed she was recruited by Epstein’s consort Ghislaine Maxwell to work as his sex slave.

Epstein, 66, a wealth financier with connections to royalty, apparently hanged himself in his cell in Manhattan last Saturday while awaiting trial accused of sex trafficking young girls.

One day earlier, 2,000 pages of damning documents were released by the Manhattan Federal Court including the letter that Trump wrote on behalf of her father.

The letter was written on headed notepaper with the Mar-a-Lago crest on the top and dated January 30, 2003. It read:

To Whom It May Concern,

Sky Roberts has been a most valuable employee at The Mar-a-Lago Club since April of 2000. While employed as a maintenance crew team member, he has been responsible for maintaining the five championship red clay tennis courts as well as keeping all of the individual air conditioning units working and in tip top shape.

It is my understanding that Skye is relocating to Colorado. Should he ever return to Florida, he would be eligible for re-hire.

Also included in the court documents is the Mar-a-Lago employee handbook which includes a section on sexual assault in the workplace.

The language is mostly standard for any such document but it does include the unexpected line that ‘harassment is not necessarily sexual abuse.’

The ‘personal appearance’ section also states everyone has to have a bath or a shower before they come to work in the morning. 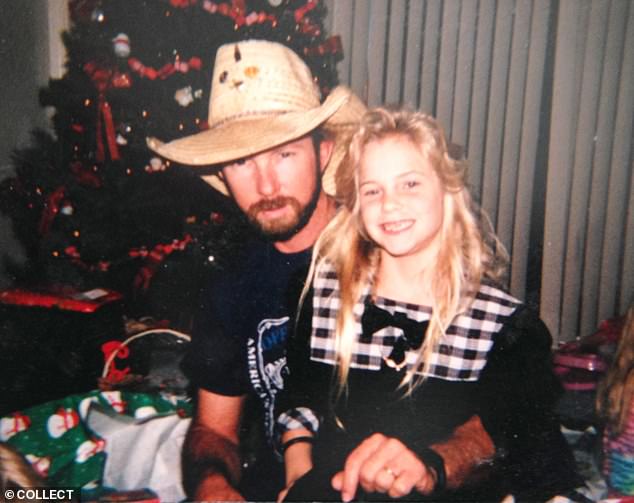 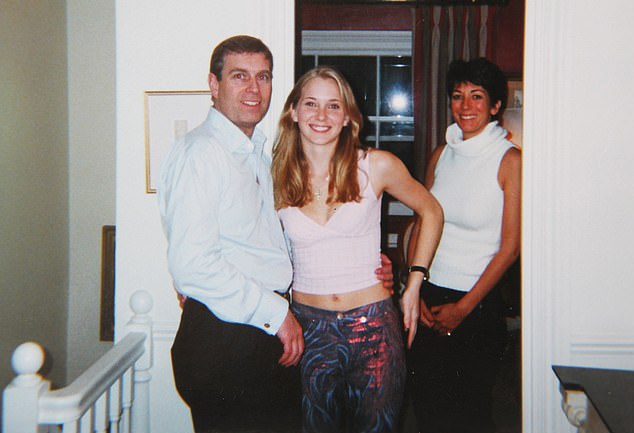 Grinning: Prince Andrew with his arm around Virginia Roberts at an Epstein party in London in 2001, with Ghislaine Maxwell behind

The document notes: ‘There is no substitute for good deodorant.’

Recently, Trump had claimed he was ‘never a fan’ of Epstein but footage from 1992 that resurfaced last month contradicted that.

In the archive footage from the NBC show A Closer Look, both men leer at a bevy of cheerleaders who are dancing in front of them.

In the clip, the future president stands next to the pedophile and points out one woman before saying ‘she’s hot!’

Trump then cracks a joke that made Epstein double over with laughter.

A 2002 interview with New York Magazine has also resurfaced in which Trump is quoted describing Epstein as a ‘terrific guy’ and ‘a lot of fun to be with.’

‘It is even said that he likes beautiful women as much as I do, and many of them are on the younger side. No doubt about it – Jeffrey enjoys his social life,’ Trump said.

Lawyers for Epstein’s victims say he began abusing young girls at least as early as 1994 – two years after the footage was shot.

In a 2016 deposition, Virginia described the moment she met Maxwell at Mar-a-Lago and was recruited to work for Epstein. 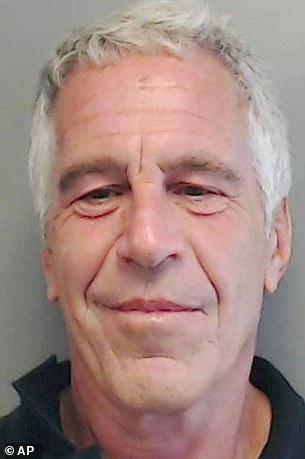 Her attorney Laura Menninger asked: ‘Where in the spa were you when you were approached by Ghislaine Maxwell?’

Virginia said: ‘Just outside the locker room, sitting where the other girl who works there usually sits.

‘I was reading a book on massage therapy…she noticed I was reading the massage book. And I started to have chitchat with her just about, you know, the body and the anatomy and how I was interested in it. And she told me that she knew somebody that was looking for a traveling masseuse…

‘If the guy likes you then, you know, it will work out for you. You’ll travel. You’ll make good money.’

In a blistering interview with the Daily Mail earlier this week, Sky Roberts repeated his daughter Virginia’s claims that Ghislaine Maxwell groomed the teenager to have sex with Epstein.

Maxwell must be ‘hunted down’ to face questions over the Jeffrey Epstein ‘sex slave’ scandal, the father of an alleged victim demanded yesterday.

His daughter also claims Epstein forced her to have sex with a series of rich and powerful men when she was just 17.

Virginia Roberts has claimed in legal documents she was flown to London where she met Prince Andrew and had sex with him in 2001.

A photo of Andrew grinning with his arm around the bare midriff of Miss Roberts when she was a teenager has become the defining image of the scandal.

Prince Andrew has always denied Miss Roberts’ allegations, which have been stricken from the record by a US judge.

Sky Roberts’ father, a retired engineer from Summerville in Florida, said the prince ‘has to live with’ the fact he was a friend of Epstein and appeared in the photograph.

Roberts, 63, spoke out days after Epstein, 66, took his own life at a high security prison in New York – a day after the federal court released 2,000 pages of damning documents.

He said the world is a ‘better place’ without Epstein, but called on the FBI to arrest Miss Maxwell over allegations she recruited underage girls for the financier. ‘Jeffrey is evil and got what is coming to him,’ said Mr Roberts, who once worked at Mar-a-Lago, Donald Trump’s Palm Beach resort. ‘He is not a good guy. It is an evil thing for a man to do that to a woman.

‘But Maxwell, she is really to blame too. She was the only one who came to the club and met these young girls. The authorities need to hunt her down and she needs to face justice. Maxwell knows it all. She is the key to finding everything out.

‘I know Jeffrey was a big part of it because he was the money guy.

‘But Maxwell had money too. She was recruiting and bringing them there.’

Some reports suggested the socialite had started to co-operate with the FBI and provide details of her alleged recruitment of girls.