Donald Trump Jr ‘asked Aubrey O’Day to have his baby’

The alleged affair between Donald Trump Jr and Aubrey O’Day may have been brief, but it appears that the two were already making some lifelong decisions.

US Weekly reports that the two were trying to start a family back in 2012 during their five-month relationship.

‘Don told Aubrey he wanted to have a baby with her,’ an insider told the magazine.

‘They were trying for one.’

At the time of the affair Don Jr had three children and his wife Vanessa was pregnant with her fourth.

O’Day actually wrote on Twitter that she was pregnant shortly after she and Don Jr reportedly split, saying: ‘I’ve been nervous to tell u this tweets, its been 3 1/2 months n hiding..But, I’m PREGNANT! Hope my baby is fearless!’

She even included an image of a positive pregnancy test as well, though she later revealed it was all a joke.

Do you have a first aid kit handy: US Weekly reports that Donald Trump Jr asked Aubrey O’Day (above in February 2012) to have his child during the pair’s five-month affair back in 2012 Her heart is damaged: At the time of the affair, Don Jr and his wife Vanessa had three children and she was pregnant with her fourth (Don Jr and Vanessa with Donnie III and Kai in October 2012) 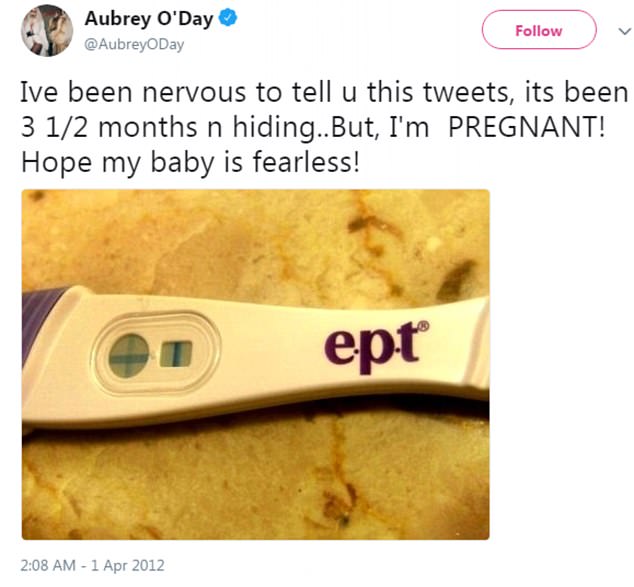 False alarm: O’Day posted the results of a pregnancy test soon after the split as a joke (above)

The magazine also reveals that the relationship between the pair carried on even after the affair was over.

‘He’d call Aubrey and leave long voicemails telling her he still loved her over and over,’ said the source.

‘He’d cry and say he was nervous his wife would take the kids away.’

The article also points out the comments that O’Day made on a 2012 podcast about her romance on the set of Celebrity Apprentice with a mystery man.

‘We did a little eye-f***ing thing,’ said O’Day of their early flirting, which all culminated with a steamy tryst during the taping of the show’s finale.

‘I was walking through the hallways and got pulled into this bathroom,’ said O’Day.

‘He threw me up against the wall and looked at me for, like, two seconds, and then we started making out like crazy.’

O’Day on the other hand made the decision to transform herself from a Marilyn into a Jackie after the split.

In red carpet footage from the launch party of Assassin’s Creed III in October 2012, O’Day explained her new look after showing up in an understated gown that was floor-length and revealed no cleavage.

‘I’m trying to dress like a politician’s wife,’ said O’Day.

In addition to replacing her skin-tight mini dresses with more understated attire, O’Day also toned down her hair by going from an electric crimson to a more subtle shade of chestnut blonde.

This sudden shift came just a few months after O’Day was dumped by Don Jr., who ended the pair’s alleged affair after his wife Vanessa allegedly discovered correspondence between the two.

It actually had begun in April, just after Don Jr called it quits, and lasted well into 2013, at which time O’Day then returned to wearing more body-conscious looks.

Vanessa would soon be pregnant again for the fifth and final time at the end of the following year and give birth in 2014 to daughter Chloe.

A little less than four years after that birth, Vanessa filed for divorce. 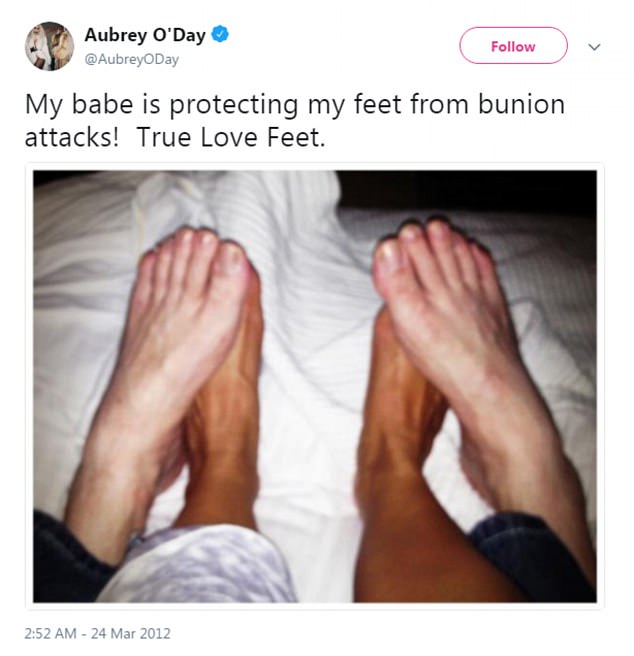 Protect and serve: Aubrey O’Day posted a photo in March 2012 of her feet being covered by the feet of another man

Romantic night in: ‘Love when my hunny doesn’t want food, attention, or sex. Some nights its rub my feet, watch Martin, & agree w everything I say,’ O’Day wrote in March 2012 (above)

Six months before she revealed the inspiration for her new look,O’Day posted a photograph of herself cozying up in bed with a mystery man back in 2012 who shares some striking similarities with Don Jr.

There are few pictures that show Don Jr’s feet surprisingly, despite his penchant for the outdoors.

Many photos of him fishing or on the beach tend to cut off at the ankles, just before revealing his feet.

This was just one of the tweets that seemed to allude to her alleged relationship with Don Jr that O’Day posted back in 2012.

Just a few weeks before, O’Day tweeted: ‘Love when my hunny doesn’t want food, attention, or sex. Some nights its rub my feet, watch Martin, & agree w everything I say time.’

Arsenio Hall, who appeared alongside Don Jr and O’Day on Celebrity Apprentice, seemed to confirm the rumors on Tuesday as well when he tweeted: ‘The year @clayaiken … and I were on Celebrity Apprentice garnered great reality TV for NBC. But we both used to say that the GREATER show, was going on behind the scenes.’

‘She called Aubrey with her kids on the phone,’ revealed a source.

Vanessa had three children at that point – daughter Kai, son Donny III and newborn Tristan – and was pregnant with her fourth child, son Spencer.

Another source stated: ‘Vanessa went crazy and was super jealous.’

The ploy eventually worked, but left O’Day in a state of shock according to one person, who said: ‘He told her it was over with his wife, that they were separated and he didn’t love her — all of that stuff. Aubrey fell for him hard. She thought they were going to be together for real

Another source explained: ‘As far as what Don told Aubrey, he was done with Vanessa. He already started putting things in place, like setting up a place in NYC to live.

‘Don would talk to Aubrey about how he was miserable in his marriage and how Vanessa was so controlling and paranoid about him leaving. In his mind, he was going to be separated with Vanessa and be with Aubrey.’