Jerry Oppenheimer is a New York Times bestselling author whose most recent books have included  biographies of Robert F. Kennedy Jr., and the Kardashians

Donald Trump Jr., plagued by personal and professional scandals ranging from alleged philandering to colluding with the Russians to blacklisting his father for a year, is pitching a top-secret book proposal, that could net the First Son  a multimillion dollar advance – if he ‘fesses up to the secrets he holds’, top book executives say.

While the title and subject of Trump Jr.’s book is being kept under wraps for now, publishing insiders say the proposed book’s greatest value will be his revelations about life inside the controversial Trump family, and his efforts to redeem his tarnished personal and public image, long a target of media reports.

The excited chatter in the book world is that Trump Jr. will score what’s being quietly described as one of publishing history’s biggest advances for what’s hoped to be an ‘Inside Trump World’ tell-all, as one top acquisition editor tells DailyMail.com.

Trump Tell-all: Donald Trump Jr is in talks for a book deal with book agent David Vigliano, known in publishing circles as ‘The Vig,’ DailyMail.com can reveal

‘That’s certainly big money, but look at how much money is being made about Trump and the Trump family by non-family members such as Trump-fired FBI director James Comey. His book has made Comey a multimillionaire. Talk about a golden parachute.’

‘Trump books are a big industry, but next to a tell-all today by the president himself, which isn’t going to happen, Donald Jr.’s book will be enormously successful.’

To help the 40-year-old Trump – the eldest of the president’s five children from three marriages – sell his secret opus, he’s retained a successful literary agency headed by the controversial book agent David Vigliano, known in publishing circles as ‘The Vig,’ and once described as ‘the publishing equivalent of an ambulance chaser.’

Vigliano has negotiated substantial advances for celebrities, including a reported $4,000,000 advance for Kurt Cobain’s journals in 2000.

While Vigliano has represented such high-profile personalities as Janet and Michael Jackson, Newt Gingrich, and Rose McGowan, one of his less publicly known clients was Kennedy family cousin, Michael Skakel, convicted for the 1975 high-profile murder of pretty 15-year-old Greenwich, Ct. neighbor Martha Moxley. 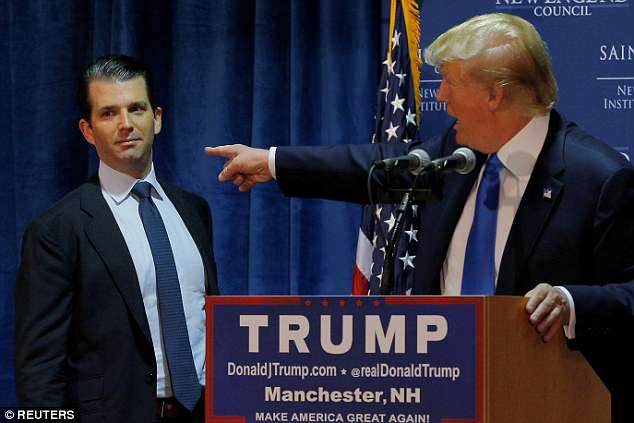 Sources tell DailyMail.com that the president’s eldest son could score a $12M advance if he agrees to write an honest tell-all about inside the Trump world

In an interview for book, ‘Robert F. Kennedy Jr. and the Dark Side of the Dream,’ in which I dealt with the Skakel case, ghostwriter Richard Hoffman, who helped draft the proposal, told me, ‘Michael had signed on with Vigliano, who kept demanding, “There’s not enough dirt in here [the proposal], you gotta get something else.”

‘Michael would give him something and Vigliano would stick it in the proposal, but would say, “It’s too tame, where’s the sex?” And so Michael kept digging deeper for anything he knew or heard and put it in the proposal.’

The proposal, an attack on the Kennedys, was circulated to five publishers in 1998, but was never sold. Vigliano declined to comment when I contacted his office about the Skakel proposal for my book.

As for the Trump Jr. saga, major publishers – with Hollywood movie moguls prepared to snap up the film/TV rights  – are betting Don Jr.’s planned secret tome could be huge, possibly even bigger than his father’s 1987 business book bestseller, ‘The Art of the Deal,’ that sold over a million copies.

One of the most successful literary agents in New York, with offices in the nation’s capital, and in Hollywood, told DailyMail.com that Donald Jr.’s book could score a giant multimillion dollar advance ‘as long as he dishes the truth, the tick tock, and the behind the scenes exclusive story about growing up Trump, about what it’s like and what it’s like being the First Son in the First Family.

‘Today, Donald Trump Jr. has a huge following on social media alone, and was reportedly getting as many as 10,000 new followers a week on Instagram, with more than a million followers in place,’ the agent told DailyMail.com. 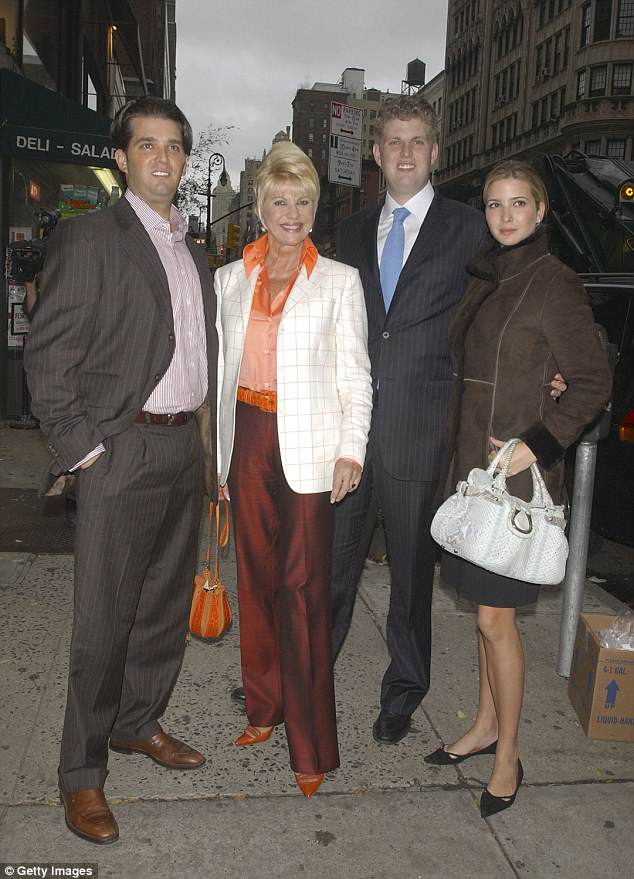 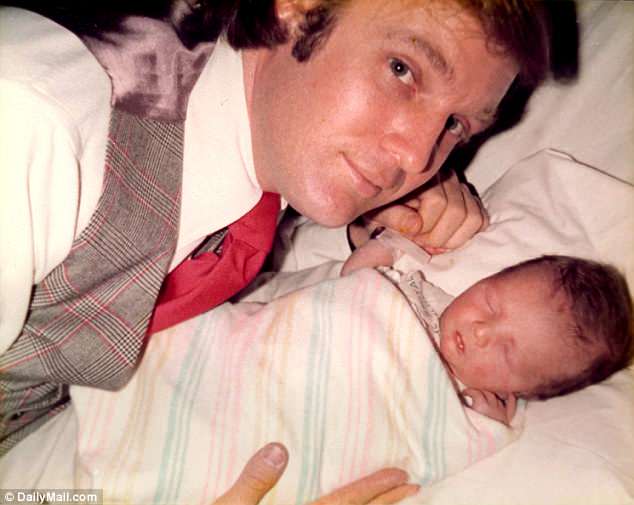 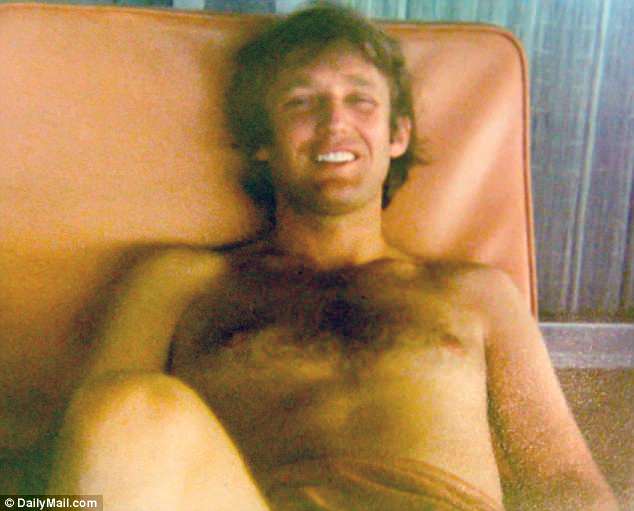 ‘His name is in the headlines everyday. Conservative and liberal mainstream media avidly follow him. He appears on the cable news shows. He testifies on Capitol Hill. He has almost the same fame and controversy surrounding him as does his father. His book – if it’s a true tell-all — will make a s***load of money.’

And recent media reports assert that Trump Jr. continues to build a huge fanbase among conservatives who believe he has a political future – if he doesn’t get entangled in Special Counsel Robert Mueller’s investigation.

In fact, one publishing executive interviewed by DailyMail.com noted that his book could be built around the truth of his involvement in alleged Russian collusion with the Trump campaign.

Trump Jr was alleged to have been present at the now infamous Trump Tower meeting in 2016 when he and others met with Natalia Veselnitskaya, a well-connected Moscow lawyer, allegedly to be given incriminating information on Hillary Clinton.

‘Millions of Trump supporters who believe the Russian collusion story being hawked by the Democrats is just fake news will buy this book, just to read the true, behind the scenes story by Donald Jr. who knows what really happened,’ the source said.

During testimony before a congressional committee, Don Jr. swore he did not ‘collude with any foreign government.’

The eldest of the Trump children, who has been no stranger to controversy and media scrutiny since his father took office, could cash in by addressing scandals inside the Trump world.

Most recently, he came under fire after he was accused of antisemitism after he  retweeted offensive comments made by Rosanne Barr. 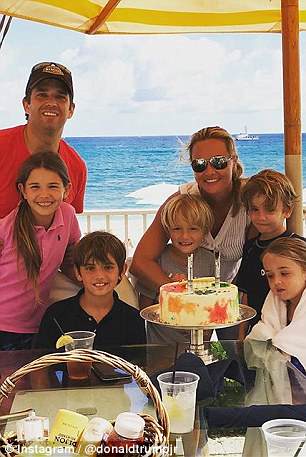 Don Jr is also in the midst of a divorce from wife and one-time model Vanessa Trump, the mother of their five children. It was later alleged that he had had an affair with singer Aubrey O’Day 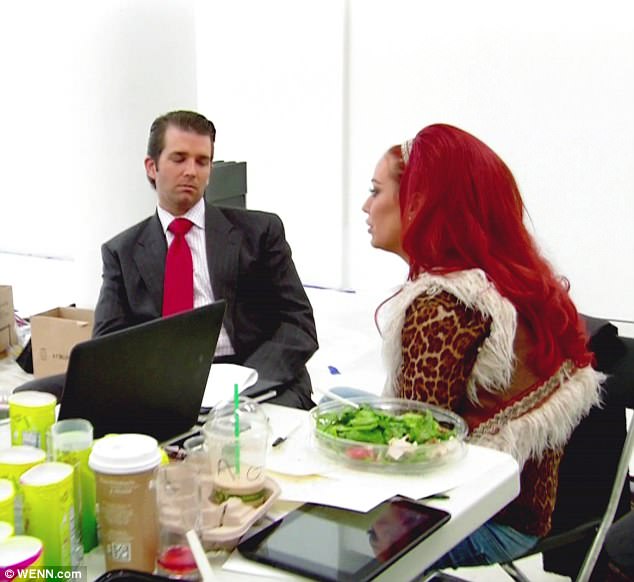 The tweet in question was one in which Barr called billionaire Democratic donor George Soros, who is Jewish, a ‘nazi’ who ‘turned in his fellow Jews.’

He is also in the midst of a divorce from wife and one-time model Vanessa Trump, the mother of their five children.

Vanessa filed for separation back in March after 12 years of marriage and it was soon revealed after that Trump Jr had an alleged fling with blond, buxom Aubrey O’Day, a contestant on Celebrity Apprentice and former singer in the girl group Danity Kane.

The affair, during which they were reportedly ‘trying’ for a baby, ended in 2012. Vanessa had reportedly discovered what were described as ‘sexy’ text messages between the two.

On the night Trump Jr.’s father was elected president, O’Day tweeted: ‘My story I didn’t tell is worth millions now.’

Subsequent to their split, it was revealed that Vanessa Trump had inherited millions of dollars as a result of her father’s investment in Rao’s Specialty Foods, sauces produced by Rao’s, an exclusive New York City restaurant.

There were published rumors suggesting that Trump Jr., worth $300 million, might try to benefit from his wife’s windfall in their divorce proceedings.

The pair were seen arriving together at a party in honor of Richard Grenell, Trump’s new ambassador to Germany, earlier this month.

Editors also say he should deal ‘honestly and truthfully’ with his relationship with his tough-talking mogul father, and what it was like being caught in his father’s messy divorce with Trump Jr.’s mother, Ivana, the first Trump wife.

He reportedly was so devastated when his parents split that he didn’t talk to the future president for a year, essentially blacklisting him.

In a TV chat with the celebrity interviewer Barbara Walters, Trump Jr. even suggested he fled from the Trump name altogether. ‘I’d introduce myself as Don,’ he stated. ‘Avoid the last name at all costs.’ 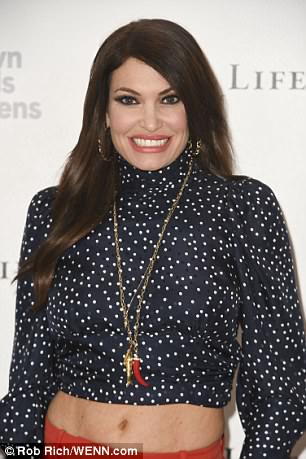 Like his father, Trump Jr. attended the University of Pennsylvania, but unlike his father, he didn’t jump right into the Trump family business, instead working as a bartender in Aspen, Colorado.

In 2001, he was arrested for public drunkenness in New Orleans, and in 2002 he got into a dispute in a New York comedy club and was bashed in the head with a beer bottle. He says he stopped drinking many years ago.

His decision to shop a book, with Vigliano as his agent, was first revealed by The New York Post late last week.

And his book would not be the first by a Trump current or former family member – but would be the biggest.

As one publishing source told DailyMail.com: ‘Ivana got a hefty advance, probably a million dollars, but sales were not great. Her book generated a ton of publicity, but she’s been off the Trump radar for far too long – since 1992 when they were divorced – to have generated the kind of advance and book buyers that her son, Don, will get.

‘Besides, a gag order she signed during her divorce, prevented her from being candid without Donald Trump’s permission. Plus, I think Ivana pissed off potential readers by calling herself the ‘first lady’ in the book and in a subsequent TV interview,’ the source added.

Ivana’s comments infuriated first lady Melania Trump – who, through a spokeswoman, blasted Ivana’s words, stating, ‘There is clearly no substance to this statement from an ex. Unfortunately only attention-seeking and self-serving noise.’

In her book, she claimed it was her idea to name their first-born Donald Jr. but that her then husband had doubts about the name.

She quoted the future president as saying about his newborn son, ‘How about if he’s a loser?’

Ivana also claimed her divorce from Trump was difficult for Don Jr., and that he stopped speaking to his father for a year.

Don Jr.’s sister, the businesswoman and Trump White House advisor Ivanka Trump, published ‘Women Who Work: Rewriting the Rules for Success,’ that hit bookstores in May 2017.

A guide for working women and mothers, with advice and tips for becoming successful in a career, it became a New York Times bestseller.

But Forbes reported in January 2018, that it lost money for its publisher, Portfolio, a division of Penguin Random House, which paid an advance of $787,500 ‘prior to her joining her father’s administration.’

According to the Forbes account, the publisher ‘lost at least $220,000.’ Forbes quoted a publishing executive as stating, ‘This is not a moneymaker [for the publisher.] They’re so underwater.’

But that’s not what what’s going to happen to the publisher who acquires Trump Jr.’s book, according to industry executives.

‘The publisher who buys Don’s book is going to make untold millions, and it will be on the bestseller lists for months.

‘He’s going to get a publishing advance that could choke a Triple Crown-winning horse. And Hollywood’s going to come running to get in on the action, with a film based on Don’s life and times. He just has to make it exclusive and honest.’