Donald Trump is visiting the Jamestown Settlement in eastern Virginia on Tuesday, speaking at an event marking the 400th anniversary of the continent’s first representative legislature.

The event comes as increasing racial tensions swirl around the White House, with Trump angering some African-Americans by calling the majority-black city of Baltimore, Maryland a ‘disgusting, rat and rodent infested mess.’

Trump blames Rep. Elijah Cummings, one of the most powerful black members of Congress, for much of the city’s steady deterioration. Cummings and other Democrats are calling the president a racist for the attacks, both verbal and tweeted.

The Virginia Legislative Black Caucus’s (VLBC) members are boycotting Tuesday’s event because the president was invited to speak.

The group said in a statement that Trump’s ‘repeated attacks on Black legislators and comments about Black communities makes him ill-suited to honor and commemorate such a monumental period in history.’

Living history: Donald Trump visited the Jamestown Settlement to mark 400 years since the continent’s first representative legislature  – the House of Burgesses, from which the Virginia Assembly is descended 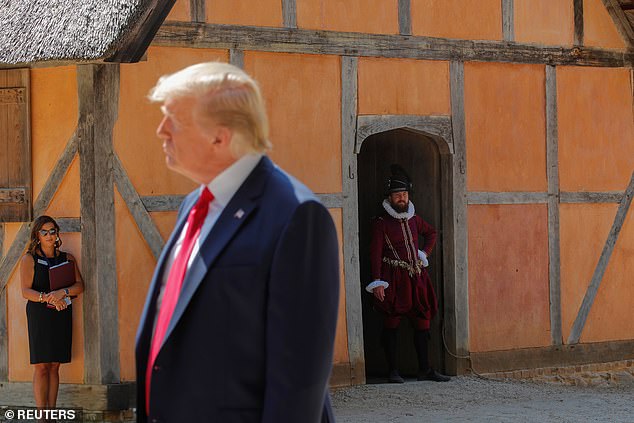 Living history: The Jamestown Settlement reconstructs the appearance of the James Fort as it was shortly after the arrival of English colonists 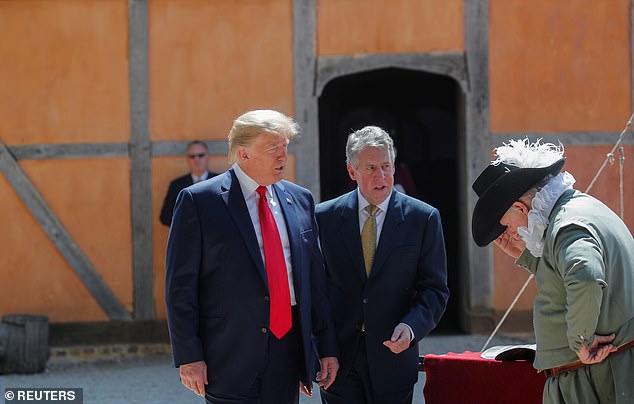 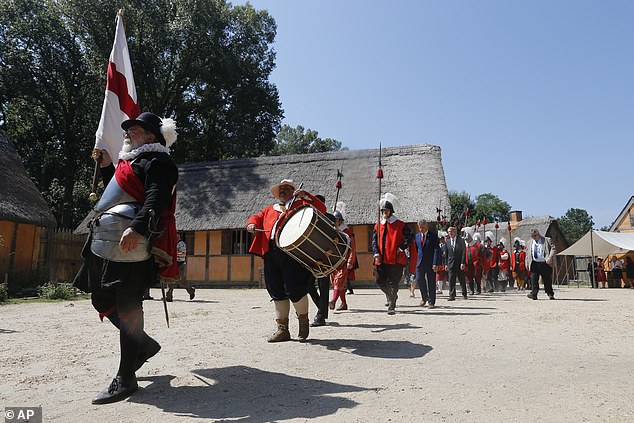 As it was: In 1619 Jamestown set up the first legislative assembly in what is now the United States. A colonial color guard led Virginia’s current speaker, Kirk Cox, to the recreated House of Burgesses 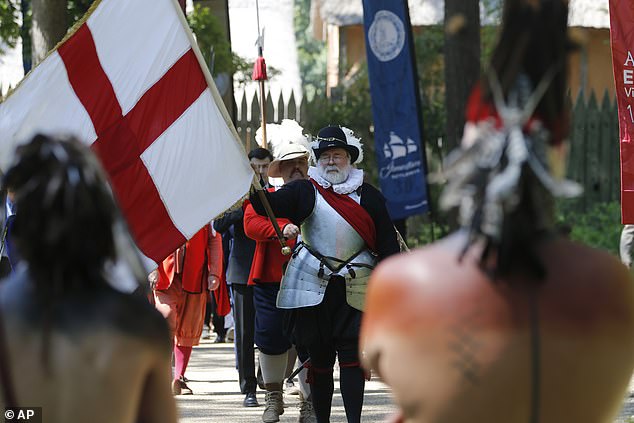 Virginia history: The House of Burgesses was set up in 1619 – the same year the first enslaved Africans arrived

The president told reporters as he left the White House on Tuesday that the boycotters are acting ‘against their own people.’

He claimed African-Americans ‘love the job’ he is doing and are ‘happy as hell’ with his condemnation of Baltimore and its main representative in Washington.

Trump is speaking at the Jamestown Settlement, a living history museum adjacent to the site of the original settlement.

His visit is to the site of the first successful English settlement in what is now the United States, named for the then King James I of England, who was also James VI of Scotland.

But it is also the settlement where the Indian princess Pocahontas saved John smith and married John Rolfe before being taken to England and dying there.

And black leaders in the Old Dominion have pointed out that 2019 also marks the 400th year since the first African slaves were brought to Virginia – another event that happened at the Jamestown settlement..

White House Press Secretary Stephanie Grisham said in a statement to reporters that ‘a political agenda’ was driving the black legislators’ decision.

‘President Trump passed criminal justice reform, developed opportunity zones securing record-setting investment in distressed communities, and pushed policies that created the lowest unemployment rates ever for African Americans,’ Grisham said, ‘so it’s a bit confusing and unfortunate that the VLBC would choose to push a political agenda instead of celebrate this milestone for our nation.’

Other state and national leader are attending, including Virginia’s African-American lieutenant governor, Justin Fairfax. He is coming despite rape allegations that have hung over him since the spring.

Virginia past: A painting suggesting how Jamestown was in the early 1600s when it was the first successful English settlement 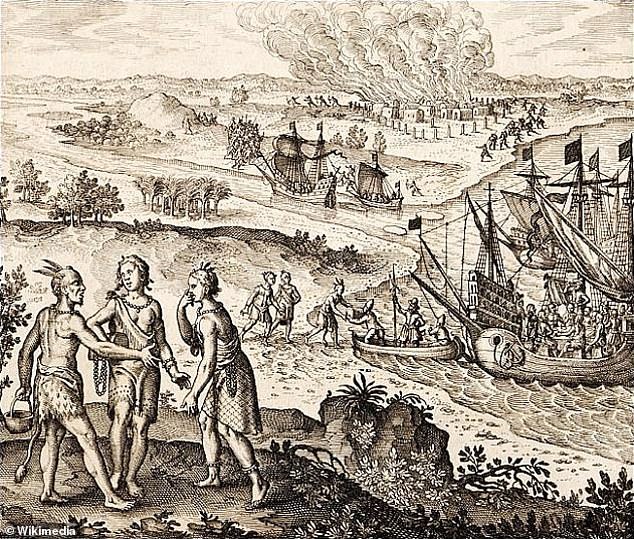 Contested history: A woodcut showing the kidnapping of Pocahontas, the Indian princess who went on to marry John Smith in Jamestown before being taken to England and dying

The state’s white Democratic governor attended a morning event at a Jamestown church before Trump left the White House.

Ralph Northam has held on to his job despite appearing in a university yearbook in blackface, alongside a person dressed in Ku Klux Klan robes.

Attorney General Mark Herring, also a Democrat, has faced calls to resign after acknowledging he too dressed in blackface decades ago.

Kirk Cox, the Republican speaker of the Virginia House of Delegates, said in a statement that ‘the Commonwealth is honored to have the President of the United States join for this historic occasion, as the General Assembly convenes on the same ground where the seeds of our system of democratic government were sowed four centuries ago.’