President Donald Trump showed his support for Goya foods by posting a picture to Instagram of himself with several of their products, a move that comes after Ivanka Trump was criticized for touting the brand on her social media channels.

The president posted a picture of himself sitting at the Resolute desk in the Oval Office – with Goya beans, seasoning mix, coconut milk and chocolate wafers spread out before him – on his official Instagram page on Wednesday. He’s giving two thumbs up as he grins at the camera.

The Trump family has been lining up behind the food company after its CEO Robert Unanue came under fire for praising President Trump at a Hispanic leaders event last week. Unanue said ‘we’re all truly blessed’ to have him as president. 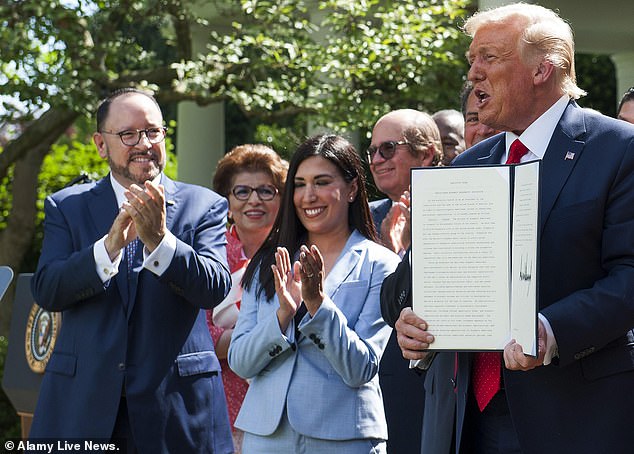 Social media users responded swiftly by calling for a boycott of the company.

In the aftermath, Ivanka Trump posted a photo to social media Tuesday night showing her holding a can of Goya beans and offering her support for the brand, prompting concerns she violated government ethics rules by endorsing the company.

The first daughter, who serves as an adviser to President Donald Trump, posted the image of her smiling, holding a can of black beans with the distinctive blue Goya label, and the words: ‘If it’s Goya, it has to be good.’ She also included the Spanish translation.

‘An employee shall not use or permit the use of his Government position or title or any authority associated with his public office to endorse any product, service or enterprise,’ the law reads.

The White House argued Ivanka Trump ‘has every right to express her personal support’ for the company.

‘Only the media and the cancel culture movement would criticize Ivanka for showing her personal support for a company that has been unfairly mocked, boycotted and ridiculed for supporting this administration – one that has consistently fought for and delivered for the Hispanic community. Ivanka is proud of this strong, Hispanic-owned business with deep roots in the U.S. and has every right to express her personal support,’ said spokesperson Carolina Hurley. 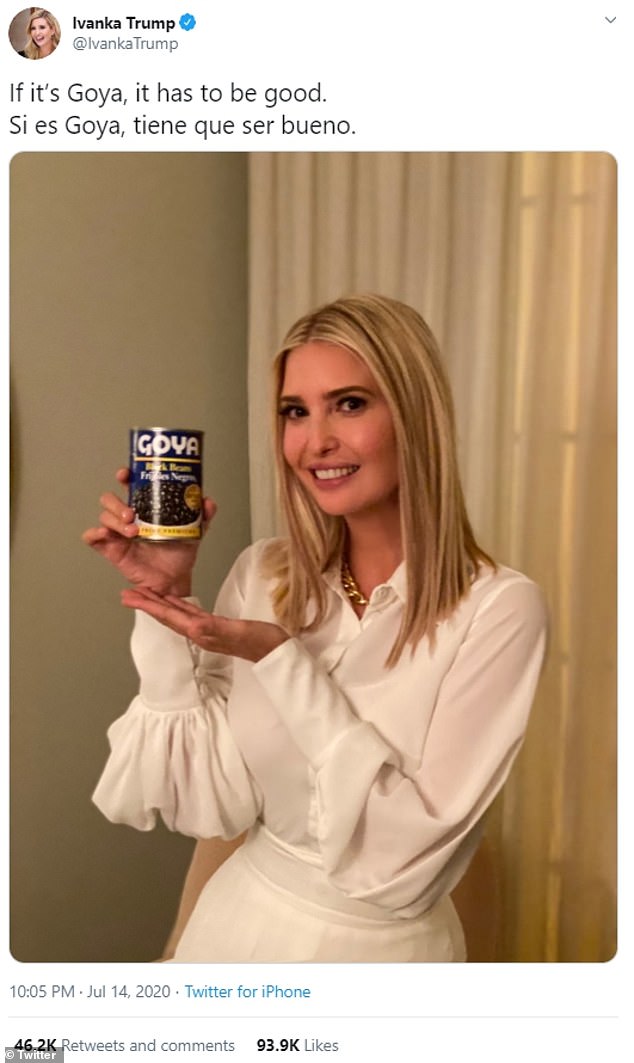 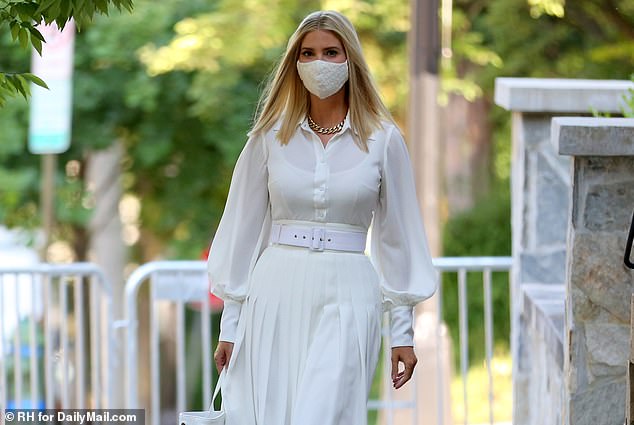 Critics pounced on Ivanka Trump’s posting and questions were raised as to whether there should be an ethics probe into the first daughter’s actions.

Democratic Rep. Alexandria Ocasio-Cortez tweeted her response to Ivanka in Spanish: ‘If it’s Trump, it has to be corrupt.’ She added an emoji of money with wings.

Others posted satires of the first daughter, using her photo but swapping out the can of beans for items like Mary Trump’s book on the Trump family: ‘Too Much and Never Enough.’

On Wednesday morning, President Trump tweeted his support for Goya – but made no mention of daughter Ivanka’s posting.

It’s not the first time a White House staffer has gotten in trouble for promoting a private company.

In 2017, White House counselor Kellyanne Conway was criticized for promoting Ivanka Trump’s clothing line during an appearance from Fox News conducted from the White House.

She faced no punishment after a White House lawyer determined she spoke ‘inadvertently.’ 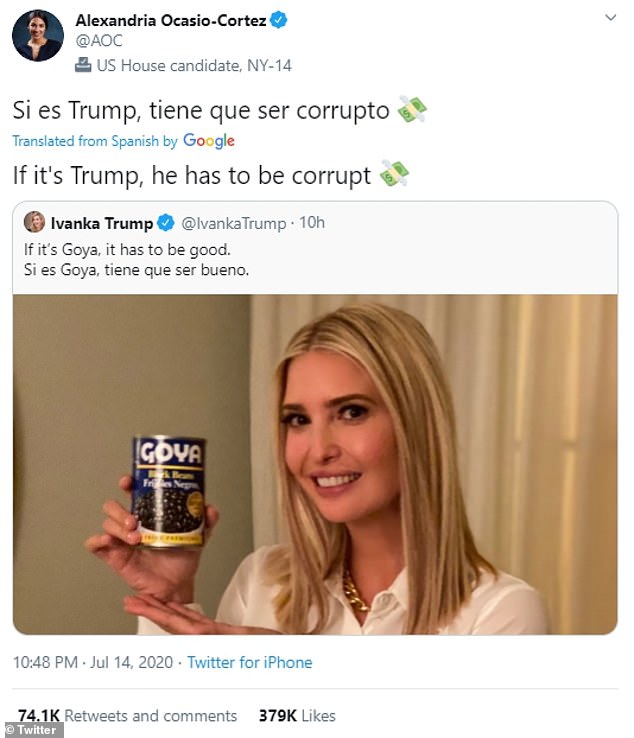 Rep. Alexandria Ocasio-Cortez hit back at Ivanka Trump in Spanish, writing: ‘If it’s Trump, it has to be corrupt.’ 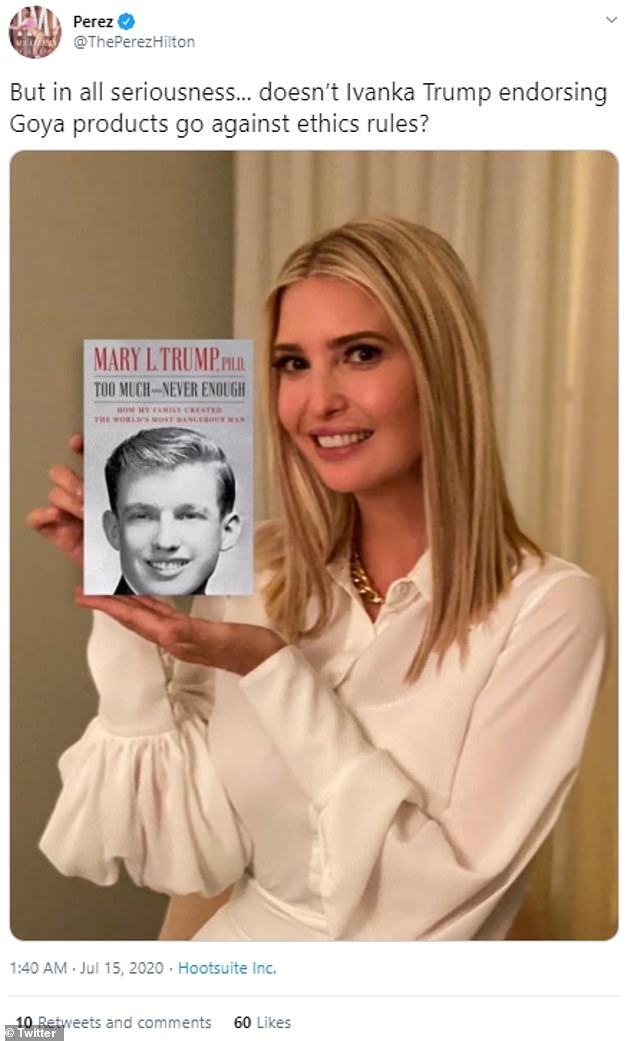 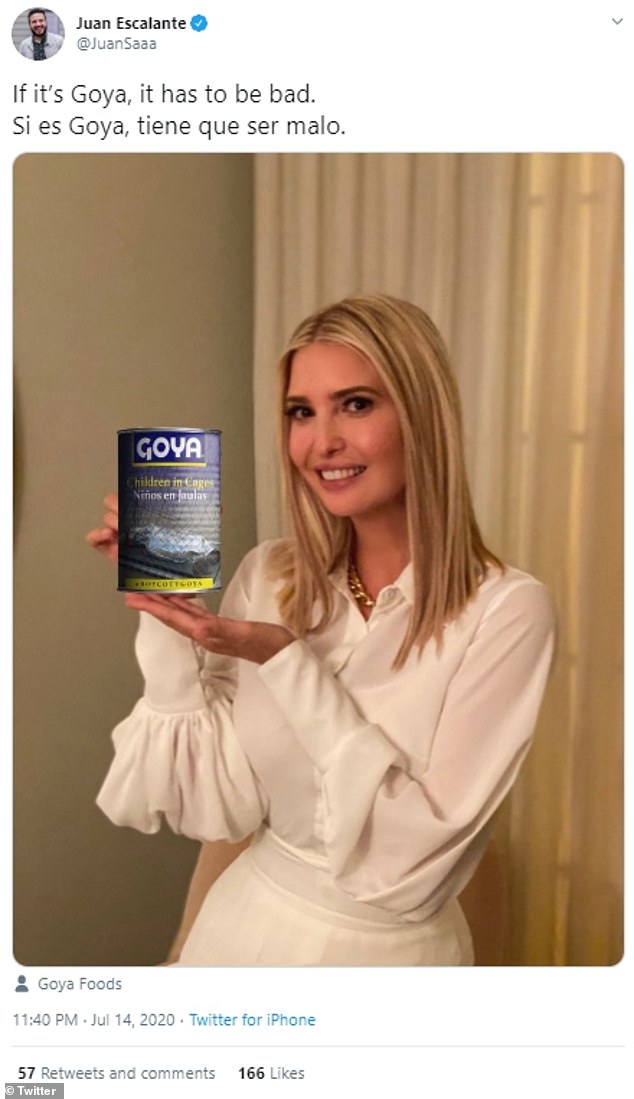 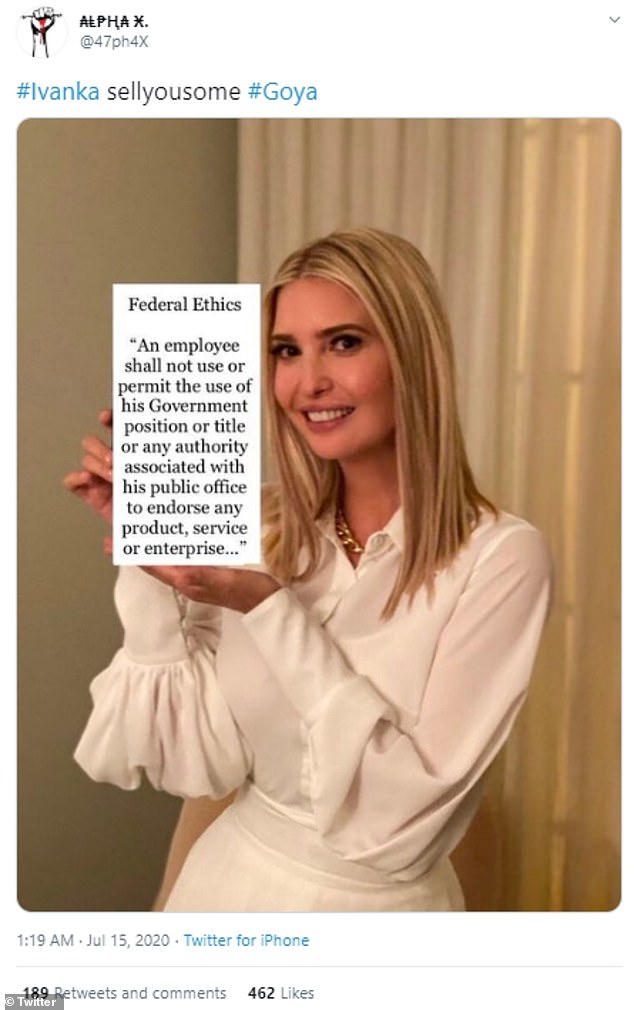 But in March 2018, a federal ethics office ruled Conway violated the Hatch Act when she advocated for Republican Senate candidate Roy Moore in Alabama’s special election during a TV interview from the White House lawn.

The Office of Special Counsel – an independent federal agency with no ties to special counsel Robert Mueller – found Conway in violation of the law, which forbids federal employees from using their office for partisan politics.

Given Conway’s high position in government it was up to President Trump to dole out her punishment. She did not get one.

Unanue, meanwhile, doubled down on his support for President Trump, saying ‘we are with the president’ and refusing to back down in the face of the boycott.

‘We are with the president. We’re with this country, you know, right, left, center, up and down,’ he told Fox News Friday. 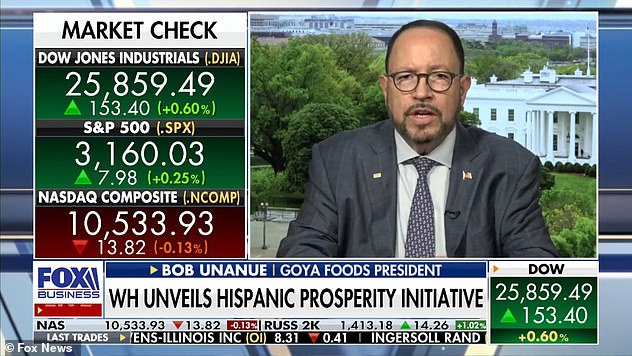 The businessman brushed off the boycott as ‘a reflection of the division.’

‘So many people are against the boycott and for our company, so it’s just a reflection, I believe, of the division that exists in this country,’ he said.

Unanue, who is also the grandson of the Goya Food founders, said his company ‘choose[s] to love and to build’ and is focused on ‘prosperity, building and giving back’.

Critics, however, said they’d refrain from supporting the company.

Ocasio-Cortez said she would learn to make from scratch some of the Latin cuisine that Goya makes, while former presidential candidate Julian Castro blasted Unanue for ‘praising a president who villainizes and maliciously attacks Latinos for political gain’.

Goya was founded in Manhattan in 1936 by Don Prudencio Unanue and his wife Carolina, immigrants from Spain.

The company calls itself the largest Hispanic-owned food company in the United States and remains in family control, with an estimated value of $3 billion and is now based in New Jersey.

Unanue, a registered Republican, has never publicly been a Trump supporter.

He donated $6,000 to the Republican Party last year. Previously he has been a small-scale donor to Chris Christie and Mitt Romney’s presidential campaign, but also to New Jersey Democratic senator Robert Menendez. 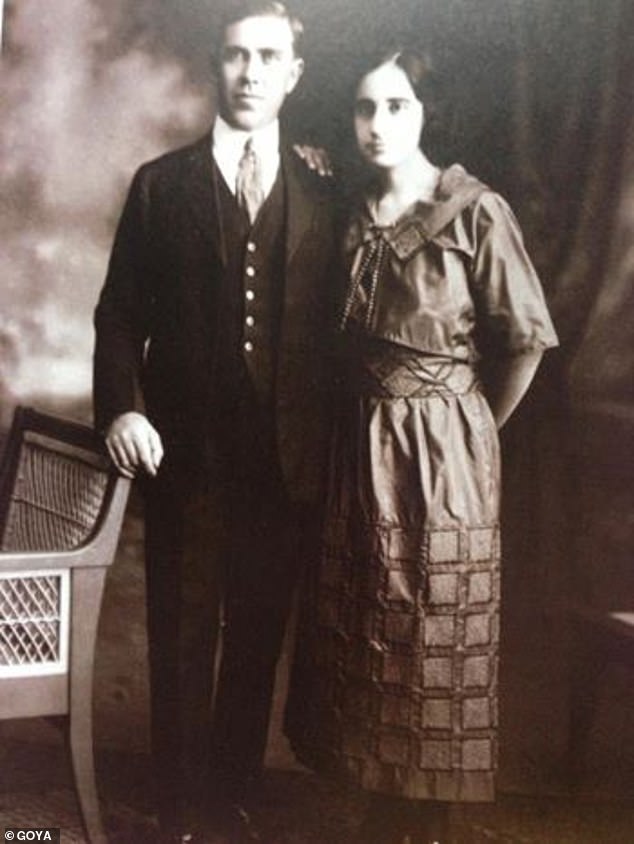 The Goya brand was founded in 1936 in Manhattan by Prudencio Unanue Ortiz and his wife Carolina Casal, both immigrants from Spain (pictured)

‘We are all truly blessed, at the same time, to have have a leader like President Trump who is a builder,’ Robert said standing at a podium beside Trump.

Several big names weighed in on the debate, citing Trump’s history of derogatory comments and harsh policies toward Hispanics, most notably, the administration’s policy of separating immigrant families at the US-Mexico border.

Robert Unanue has been serving as CEO of Goya Foods since 2004 when he ousted his uncle Joseph Unanue – then president- and cousin Andy Unanue – then-COO – from the company.