Donald Trump may be singing the praises of Boris Johnson but his relationship with the UK took a bizarre turn today when the confused President asked his counterpart: ‘Where’s England?’.

Trump, who has run into trouble before when discussing Britain, asked ‘what’s happening with England?’ and claimed that ‘they don’t use it too much any more’.

Speaking at the G7 summit in France he said he had quizzed Mr Johnson on UK geography during their talks.

Trump is by no means the first to struggle with the UK’s somewhat overlapping terminology, and Americans sometimes use ‘England’ in situations where British people generally would not.

However, he provided no evidence for his claim that the term ‘England’ is used any less than usual.

Donald Trump is pictured at a G7 press conference today where he revealed he had asked Boris Johnson to explain ‘where’s England?’

Where IS England? UK geography explained

At first glance, the geography of the UK is clear enough.

United Kingdom: A sovereign nation made up of four countries, which are England, Scotland, Wales and Northern Ireland.

Great Britain: The physical island which makes up England, Scotland and Wales. This does not include Northern Ireland.

England: One of the four countries, although much the largest by area and population.

However, the position is complicated by the fact that ‘Britain’ and ‘British’ are widely used as shorthand for the United Kingdom, even though Great Britain and the UK are not the same thing.

There is also the British Isles, a label for the whole archipelago which includes Great Britain, the entire island of Ireland and various smaller islands.

In addition, Americans sometimes say ‘England’ to mean the whole country in situations where British people generally would not.

At a Biarritz press conference today he said: ‘I asked Boris: Where’s England? What’s happening with England? They don’t use it too much any more.

‘We talked about it, it was very interesting.

‘But the UK is a great, incredible place, it’s an incredible nation and it’s been one of our tremendous allies.’

Trump is no stranger to the UK and owns golf courses in Scotland.

He visited one of them the day after the Brexit referendum in 2016. Since then, he has falsely claimed that predicted the result there before it happened.

Trump has visited Britain twice as U.S. President, once on a working visit in 2018 and again for a full state visit earlier this year.

After his second visit, he wrote on Twitter that he had met the ‘Prince of Whales’ – meaning Charles, the Prince of Wales.

Trump later replaced his tweet but not before he had been widely mocked on social media.

He also referred to the Queen in somewhat curious terms, describing her as ‘the Queen of England (U.K.)’.

Last month his daughter Ivanka was roundly mocked after writing ‘United Kingston’ instead of United Kingdom when she congratulated Mr Johnson on becoming PM.

Another gaffe took place just days after Trump took office when an official White House schedule referred to the then-PM as ‘Teresa May’.

At the press conference today Trump said Mr Johnson would be a ‘great Prime Minister’ but predicted he may not reach a Brexit deal. 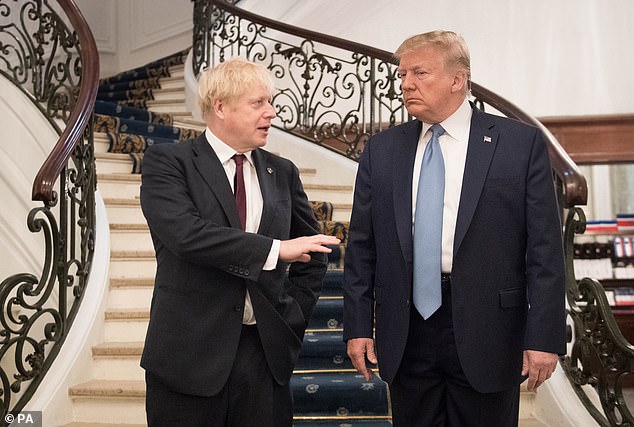 Donald Trump and Boris Johnson are pictured together at the G7 summit in France, where they discussed trade, Brexit – and UK geography

‘The European Union is very tough to make deals with – just ask Theresa May,’ the President said at the close of the G7 summit.

‘They may have to get out, they may not make a deal.’

Ahead of the summit, host Emmanuel Macron said there would not be a final communique, an agreed statement backed by all the leaders.

The 2018 G7 summit ended in farce as Mr Trump withdrew his support for the text and Mr Macron was keen to avoid a repeat performance.

Both leaders were keen to stress their desire for a trade deal after the UK has left the European Union.

But Mr Johnson has raised a series of areas where he wants concessions from Washington.

Asked if he had made clear his views on protecting the NHS and animal welfare standards in trade talks with Mr Trump, the Prime Minister said: ‘There is complete unanimity on that point.’

He told ITV: ‘There’s an opportunity to do a great free trade deal with the United States. ‘The president is very gung-ho about that and so am I.’

But he added that ‘I don’t think people realise quite how protectionist’ the US market can be.