President Donald Trump on Wednesday revealed plans to travel the country in the next few weeks that could eventually lead to the return of his massive campaign rallies.

‘I’d like to get out,’ Trump said bluntly at an event with business leaders at the White House. ‘This is the most beautiful house in the world, in my opinion, but I think there’s just a great demand to get out.’

The president has shown increased signs of restlessness but now has specific plans to combat it with day trips outside of Washington D.C., where he’s been holed up in the White House since March 9, and reports indicate he’s getting frustrated with it.

Trump noted he’s going to Arizona next week and plans for a trip to Ohio are in the works, adding that could all lead to the return of his campaign rallies, events that brought thousands into crowded arenas and sports venues. 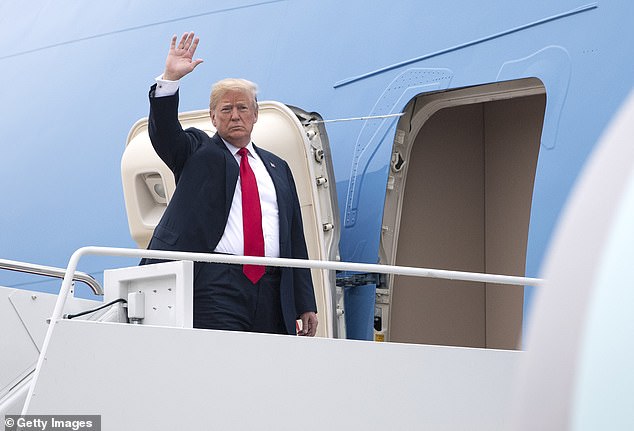 Trump said he’d be traveling to Arizona next week, a state crucial to his re-election where a recent poll showed him trailing Joe Biden by nine points

Both states are crucial to the president winning a second term in November’s election.

A poll out last week showed Democratic presumptive nominee Joe Biden up nine points in Arizona, which tends to trend red. The poll was a troubling sign for Trump as Arizona hasn’t gone for a Democratic presidential candidate since 1996.

Trump said his Arizona visit would be ‘industry’ related, indicating it would have something to do with combating the coronavirus.

In Ohio, Republican Gov. Mike DeWine was ahead of the curve on the coronavirus, ordering lock downs in his state early on when Trump was still dismissive of the scale of the disease. It has seen DeWine’s popularity soar in the industrial state that is Trump needs in his corner in November.

Any upcoming presidential travel would likely be similar to the trips Mike Pence has taken this month, when the vice president went to Wisconsin last week to tour a GE factory making supplies to combat the coronavirus. Pence also traveled to a Wal-Mart distribution center in Virginia on April 1 and will go to Indiana at the end of the month to visit a GM plant.

But Pence came under fire for his Tuesday trip to the Mayo Clinic, where he did not wear a face mask in violation of hospital policy.

Campaign rallies, for now, appear to be off the table although Trump said there was a ‘tremendous pent up demand’ for them.

The president acknowledged it was ‘too soon’ to hold them but noted he was looking forward to them returning in the ‘not too distant future.’

‘We have a tremendous pent up demand,’ he said. His last campaign rally was Monday, March 2, in Charlotte, N.C.

‘We’re going to start to move around and hopefully – in the not too distant future -we’ll have some massive rallies and people will be sitting next to each other,’ he said.

Trump, who often brags about his crowd size, made it clear he wants full venues of screaming fans to greet him.

‘I can’t imagine a rally where you have every fourth seat full. Every, every six seats are empty for every one that you have sold that wouldn’t look too good. No I look, I hope that we’re going to be able to do some good old fashioned 25,000 person rallies, where everyone’s going wild because they love our country. I expect that to happen,’ he noted.

He declined to give a timetable on when he thinks that will be, saying it would depend on the state.

The White House has left it up to individual governors to determine when to reopen their states.

The administration has issued guidance on three phrases of coronavirus recovery with a slow reopening of businesses at each stage. States would have to be at level three in order for campaign rallies to be held. 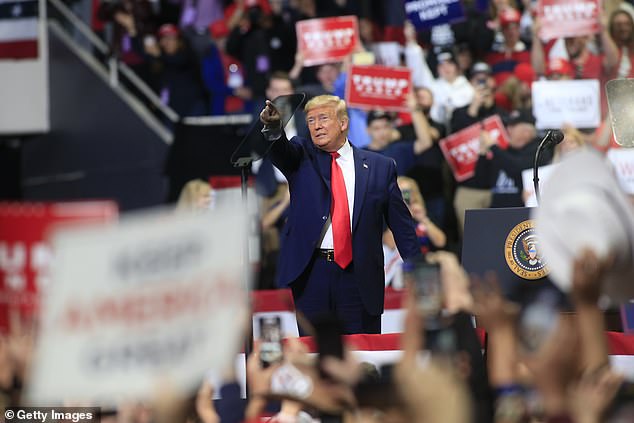 Trump spoke of his longing to return to holding campaign rallies – like the one he held March 2 in Charlotte, N.C. 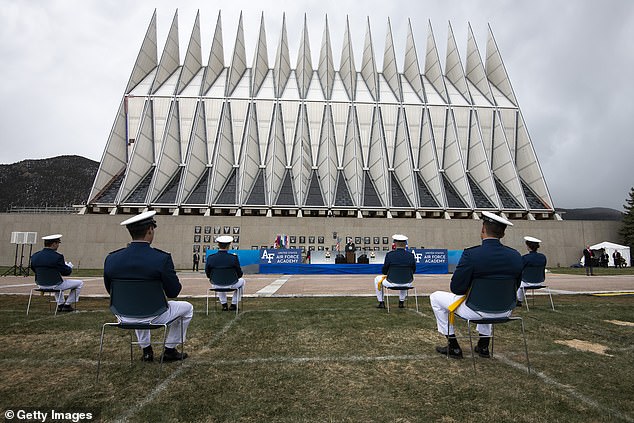 Trump already has one event already on his calendar: he’ll give the commencement address at West Point in New York on June 15.

The demand to get out is Trump’s. Both he and Biden have been home bound as they obey social distancing rules put in place to combat the spread of the coronavirus.

The president has bemoaned being stuck inside the White House where he is cut off from his friends, his weekends at Mar-a-Lago and his golf course – all outlets he uses to recharge.

‘I’ve been to the White House now for many months,’ he said, a complaint he also made last week amid signs he is restless.

But it’s not been months since he’s been out.

The president returned from a weekend at Mar-a-Lago on Monday, March 9, and has been in Washington D.C. ever since dealing with the coronavirus pandemic. He did make a day trip to Norfolk, Virginia, on March 28 to watch the USNS Comfort leave for New York.

He dismissed worries about the coronavirus. Health professionals have warned that going back to business too quickly could lead to a second wave of the pandemic.

‘It’s going to go, it’s gonna leave,’ Trump said of the coronavirus, which has shown no signs of leaving. 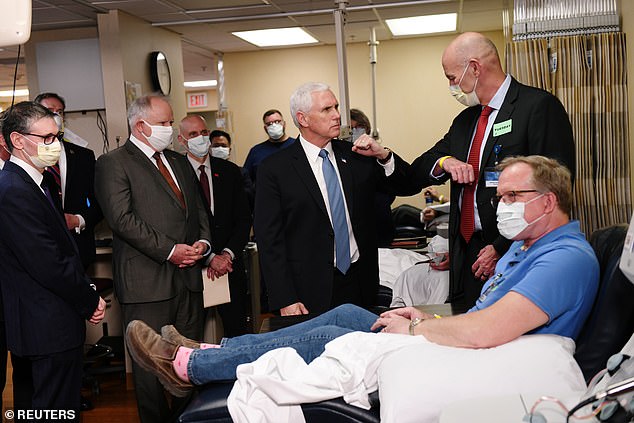 The virus has  infected more than a million people in the U.S. and killed more 59,000 people – more Americans that died in the Vietnam War.

Trump said any signs of a second wave of the virus would be dealt with quickly.

The president said he envisioned the country going back to the way it was three months ago, before the pandemic took off in the United States, as opposed to some kind of new normal.

‘I see the new normal going back to what it was three months ago,’ he said. ‘I think we want to go back to where it was, when I look at a baseball game I want to see people right next to each other.’

Previously Trump has said he doesn’t think hand shakes will survive the coronavirus, arguing that could be a good thing.

‘And, frankly, much of the guidelines like shaking hands – maybe people aren’t going to be shaking hands anymore,’ Trump said in late March, arguing that it could cut down on spreading other illness, including the regular flu.