Donald Trump says Americans are all praying for Boris Johnson

BREAKING NEWS: Donald Trump says Americans are all praying for Boris Johnson and says the U.S. has offered to help his treatment while he is in intensive care with worsening coronavirus conditions

President Donald Trump offered his support for Boris Johnson after the UK prime minister was taken into intensive care in London on Monday.

‘I want to send best wishes to a very good friend of mine, and a friend to our nation, Prime Minister Boris Johnson,’ Trump said at his daily White House briefing.

‘We are very saddened to hear that he was taken into intensive care this afternoon a little while ago. And Americans are all praying for his recovery.

‘He has been a really good friend pretty something special. Very strong. Resolute, he does not quit. Does not give up.’

Trump said he has asked two therapeutics companies working with the US government to ‘contact London immediately’ about assisting with Johnson’s case. 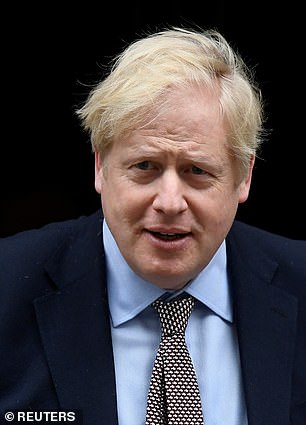 ‘We have made tremendous progress on therapeutics. I had a fantastic call today that I will be talking about a little bit later,’ Trump said.

‘I have asked two of the leading companies – these are brilliant companies, they have come up with solutions and just have done incredible jobs – I have asked them to contact to London immediately.

‘The London office has whatever they need. And we will see if we can be of help. We have contacted all of Boris’ doctors, and we will see what is going to take place. But they are ready to go.

Trump added: ‘But when you get brought into intensive care, that gets very, very serious with this particular disease.

‘So, the two companies are there. And with what they are talking about, and it is rather complex, and has had really incredible results.

Johnson was taken into intensive care on Monday after his COVID-19 worsened, his office said.

‘Since Sunday evening, the Prime Minister has been under the care of doctors at St Thomas’ Hospital, in London, after being admitted with persistent symptoms of coronavirus,’ Downing Street said.

‘Over the course of this afternoon, the condition of the Prime Minister has worsened and, on the advice of his medical team, he has been moved to the Intensive Care Unit at the hospital.

‘The PM has asked Foreign Secretary Dominic Raab, who is the First Secretary of State, to deputise for him where necessary.’