Donald Trump suggested Tuesday night for the second time in a month that a deceased Democratic political icon is in hell, lobbing that insult at the late President Lyndon Baines Johnson.

Trump said the same thing in December about Rep. John Dingell, who passed away last February.

The president told a boisterous political rally crowd in Milwaukee that his much-dissected phone call with Ukrainian President Volodymyr Zelinsky, which launched the articles of impeachment against him, was ‘perfect.’ He added that the famously foul-mouthed LBJ was ‘probably looking down—or looking up’ with bemusement.

‘Did anybody read the transcript? It’s a perfect call,’ Trump said. ‘In fact if you go back and look at Lyndon Johnson … you know, Lyndon Johnson was sort of a tough guy. Can you imagine his phone calls?’ 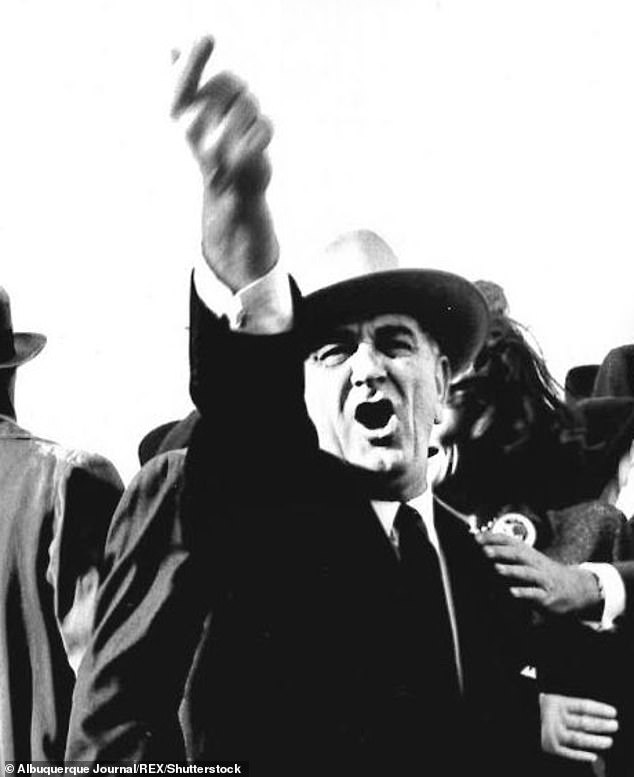 Trump said 1960s-era President Lyndon Baines Johnson, who famously had a foul mouth and left behind salty phone recordings, might be ‘looking up’ at him with bemusement as he undergoes impeachment over a ‘perfect’ phopne call with his Ukrainian counterpart 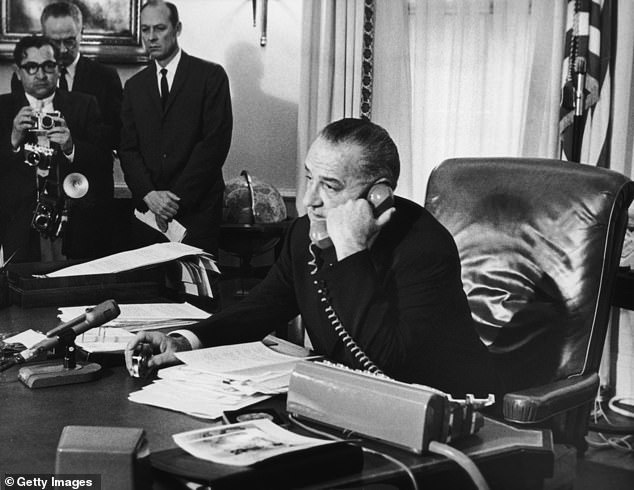 Some of LBJ’s recordings, made with an Oval Office taping system, included racist rants and vulgar comments about women including reporters and White House staff

Attorney George Conway, a frequent thorn in Trump’s side whose wife is presidential counselor Kellyanne Conway, jabbed that ‘Trump is hoping to meet LBJ I guess.’

Illinois Democratic Rep. Raja Krishnamoorthi said of LBJ’s many surviving phone call recordings that ‘[as] hard as many of them can be to listen to now for many reasons, he didn’t ask foreign governments to intervene in our elections in exchange for congressionally authorized military aid.’

Trump raised Capitol Hill’s collective blood pressure in December as he blasted Michigan Democratic Rep. Debbie Dingell for lavishing praise on him in private while clobbering him with her public rhetoric.

The president had given the late Rep. John Dingell ‘A-plus treatment’ following his death by lowering American flags to half-staff. 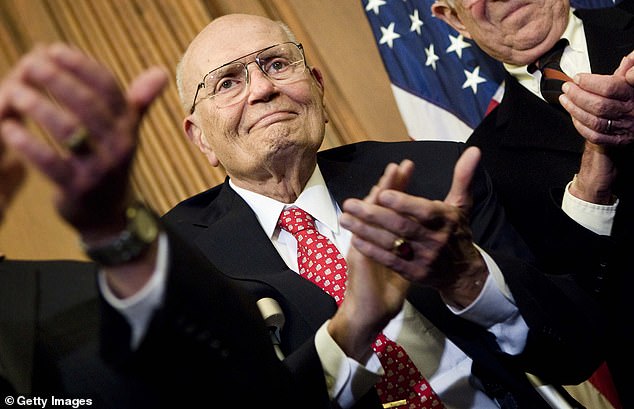 Trump said in December that the late Rep. John Dingell (pictured), a devout Catholic, had been condemned to hell—saying he was ‘looking up’ at those still living rather than looking down

‘She calls me up,’ he told a rally crowd of Debbie Dingell. ‘”That’s the nicest thing that ever happened! Thank you so much. John would be so thrilled. He’s looking down. He’d be so thrilled”,’ the president said, recounting what she had told him.

Trump made the remarks after Debbie Dingell voted in favor of two articles of impeachment. She responded in a tweet: ‘I’m preparing for the first holiday season without the man I love. You brought me down in a way you can never imagine and your hurtful words just made my healing much harder.’

John Dingell was the longest-serving member of Congress wjhen he died at age 92. he had represented a House district outside Detroit for 59 years.