Donald Trump has said that he is ‘sending people in to New York’ in the same way he has sent federal forces to Chicago and Portland.

Trump made his announcement the day after Andrew Cuomo, the governor of New York, said he had received reassurances from the president that federal agents were not being sent.

‘You look at what they’re doing to cities – every city is run by a liberal Democrat, and they’re going to hell,’ he told Barstool Sports.

‘We’re sending people to New York, to help out.’

It was unclear why the president wanted to send federal forces to New York.

New York City is seeing a surge in gun crime, but the issue is one for the City, rather than at the federal level.

He has floated the idea of sending in troops for several days.

‘I’m going to do something — that, I can tell you,’ he told reporters in the Oval Office on Monday.

The White House did not respond to DailyMail.com’s request for further detail of the deployment.

On Thursday Cuomo said that Trump told him federal agents were not being sent to New York City.

The president told Cuomo he would discuss the deployment of agents with the governor before making a decision.

‘He has suggested he would send troops to New York City – troops, federal agents, whatever.

‘I don’t believe there is any justification in doing that. There are not any federal buildings that need protecting.’

He said sending in federal troops would be ‘inflammatory’. 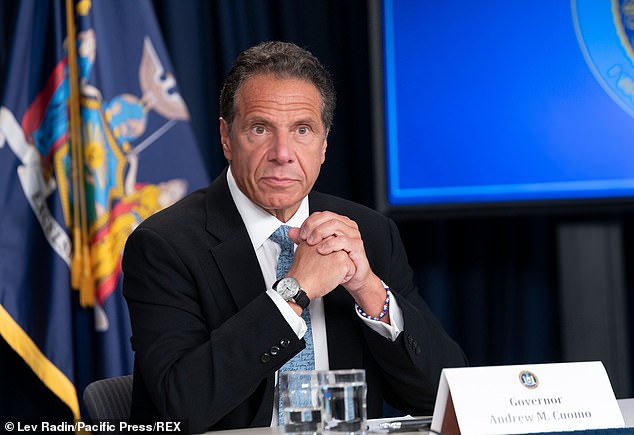 Andrew Cuomo, governor of New York, said Thursday he would sue if federal forces were sent

‘The president and I had a good conversation,’ he said.

‘He said he would not be sending troops into New York City – he did not say, period, ad infinitum, but he said that we would talk before he did anything.’

Cuomo said that if the president were to send federal agents to New York City the state would sue.

‘I believe it is blatantly unconstitutional,’ he said.

Trump’s decision to send forces in to Portland and Chicago has been met with widespread anger in those cities.

Teams of federal agents from several agencies have been operating in Portland for much of July, drawing outrage from city officials, including Mayor Ted Wheeler, who said their presence inflamed tensions.

The attorney general of Oregon filed a legal bid to restrict the operations of federal agents who have been battling protesters nightly in the city.

That suit was rejected by a judge on Friday. 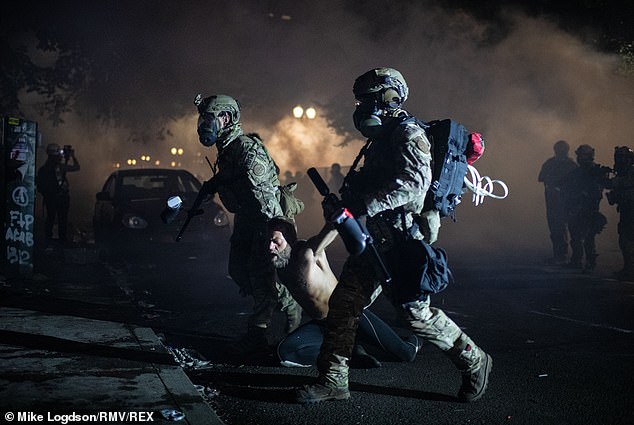 A number of other lawsuits have been filed by private parties against the presence of the federal agents, who have been arresting protesters from unmarked vehicles, and Ellen Rosenblum, the attorney general, said she hoped their suits would be more successful.

‘Every American needs to be concerned about what’s happening in Portland,’ Ms. Rosenblum said.

‘It could be happening in your city next.’

Trump has said he is pleased with the approach of the Border Patrol Tactical Unit (BORTAC) team in Portland, despite their presence sparking a surge in protests, including from a ‘Wall of Moms’ demanding the federal forces leave.

On Monday, the president declared the deployment of the DHS taskforce a success.

‘In Portland, they’ve done a fantastic job,’ he said.

‘They’ve been there three days, and they really have done a fantastic job in a very short period of time.’ 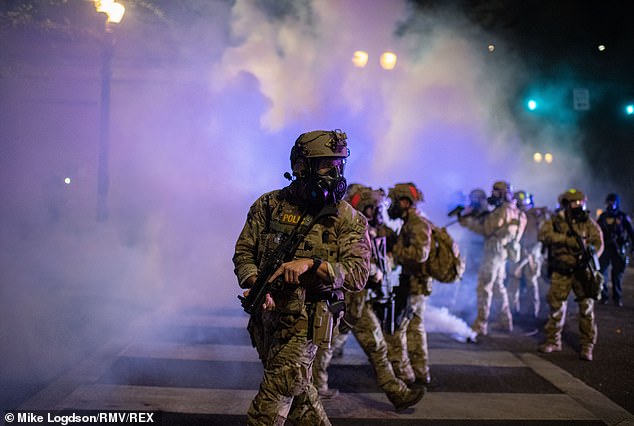 Federal forces have been on the streets of Portland, Oregon, for much of July

In Chicago, Trump’s decision to send in federal agents to quell gun violence was equally greeted with anger.

The number of agents involved is not clear, but Attorney General Bill Barr suggested at one point that around 200 new agents could end up in Chicago.

A Justice Department press release said Chicago would receive 100 new federal investigators. It also said 100 officers from the U.S. Marshal’s Service and 100 from the Homeland Security Department would be reassigned to the Chicago portion of a crime-fighting effort known as Operation Legend, which was launched last month in Kansas City, Missouri.

The Trump administration announced July 8 that it was sending more than 200 agents to Kansas City, Missouri, under Operation Legend, which was named after 4-year-old LeGend Taliferro, who was fatally shot while sleeping in a Kansas City apartment last month.

The agents in Kansas City were to investigate homicides, shootings and violent crime in cooperation with local law enforcement agencies, officials said.

Many of the agents being deployed to Chicago are already based in and around the city.

For now, the plan for Chicago and Albuquerque, New Mexico, does not seem to include federal agents engaging with protesters.

And on Thursday, agents from the Special Response Team, operated under U.S. Customs and Border Protection, were sent to Seattle.

The federal forces are typically deployed for intense law enforcement operations, similar to the agency’s BORTAC group that has operated in Portland.