The founder of Black Lives Matter’s New York chapter has threatened to ‘burn down this system’ unless the United States changes its ways – remarks that Donald Trump on Thursday labelled ‘treason, sedition, insurrection’.

Hawk Newsome spoke to Fox News on Wednesday night, and was asked about his June 3 interview with DailyMail.com.

In the interview with DailyMail.com he said that the black rights group is ‘mobilizing’ its base and aims to develop a highly-trained ‘military’ arm to challenge police brutality head on.

‘We want liberation. We want the power to determine our own destiny. We want freedom from an oppressive government, and we want the immediate end of government sanctioned murder by the police.

‘And we prepare to stop these government sanctioned murders by any means necessary.

‘We are preparing and training our people to defend our communities.’

Newsome was asked about those comments on Fox News.

‘If this country doesn’t give us what we want, then we will burn down this system and replace it,’ he told host Martha MacCallum.

Hawk Newsome, Chairman of BLM’s Greater New York chapter, told DailyMail.com the Black rights group is ‘mobilizing’ its base and aims to develop a highly-trained ‘military’ arm to challenge police brutality head on 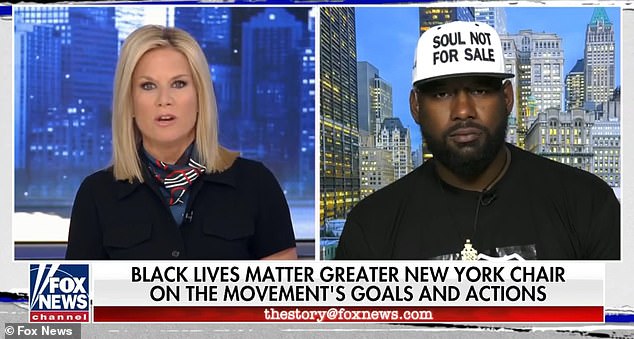 Donald Trump tweeted his displeasure at Newsome’s remarks on Thursday

Trump on Thursday hit back at Newsome, calling his marks ‘treason, sedition, insurrection’.

Racial tension has exploded across the country since the killing of George Floyd by a white police officer in Minneapolis on May 25.

Hundreds of thousands of protesters have taken to the streets of cities from coast to coast, calling for police reforms.

But the protests, largely peaceful, have sometimes turned violent, with looting and arson. 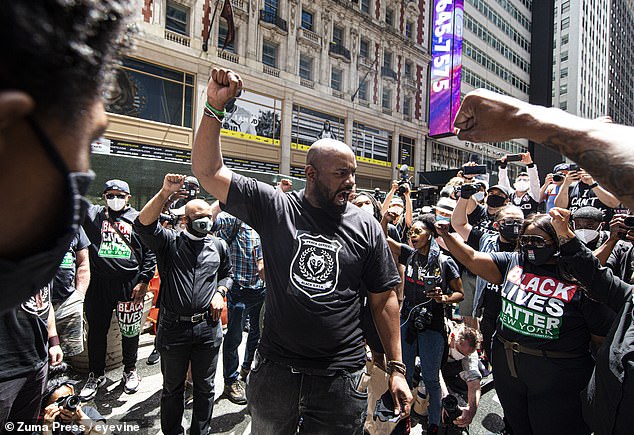 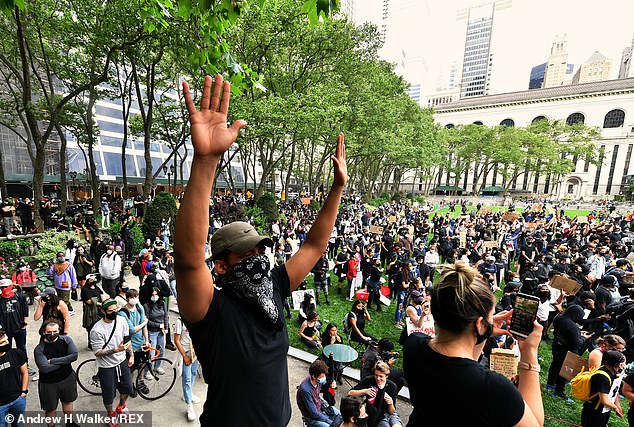 Newsome says his chapter is now raising a ‘war chest’ and plans to build a headquarters in an unused church in New York. But while big money donations have been flooding in from celebrities and high worth individuals, he insists his group won’t accept the ‘corporate dollar’. Pictured: Peaceful Black Lives Matter demonstrators in Bryant Park NYC on June 2 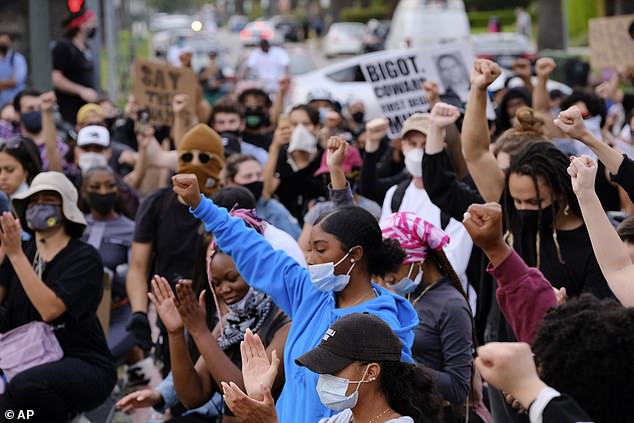 The protesters have also targeted monuments and statues, including those of Confederate soldiers and the Founding Fathers, spray-painting them with graffiti and pulling them to the ground.

Newsome said the movement is about ‘saving lives’ and it should be praised for supporting the Second Amendment.

He said the protest was getting positive results.

‘Let’s observe the history of the 1960s, when Black people were rioting,’ he told the tv channel. 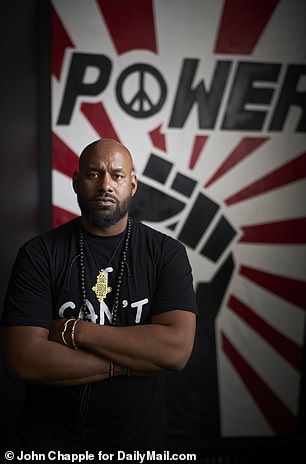 ‘We had the highest growth in wealth, in property ownership.

‘Think about the last few weeks since we started protesting.

‘There have been eight cops fired across the country.

‘I don’t condone nor do I condemn rioting.

‘But I’m just telling you what I observed.’

Newsome insisted the Black Lives Matter movement is about ‘saving lives’ and its adherents should be ‘applauded’ for upholding the Second Amendment.

‘There’s nothing more American than that.

‘We talk about uplifting and upholding the Second Amendment but it seems to be the hypocrisy of America that when black people start talking about arming themselves and defending themselves, [that] talk is “violent”.

‘But when white people grab assault rifles and go to our nation’s, their state capitals, it’s all good.’

MacCallum opened the discussion by referencing DailyMail.com’s interview, and asking Newsome: ‘You have said that violence is sometimes necessary in these situations. What exactly is it that you hope to achieve through violence?’

Newsome contested the premise of her question.

‘Wow, it’s interesting that you would pose that question like that,’ he said.

‘Because this country is built upon violence. What was the American Revolution, what’s our diplomacy across the globe?

‘We go in and we blow up countries and we replace their leaders with leaders who we like. So for any American to accuse us of being violent is extremely hypocritical.’

The pair then discussed Martin Luther King Jr and his legacy, before Newsome tried to get the host to agree that Jesus was Black.

At the conclusion of the interview, Newsome told MacCallum: ‘I just want Black liberation and Black sovereignty, by any means necessary.’