President Donald Trump proposed unorthodox new treatments for the coronavirus at Thursday’s White House press briefing – including the use of ultraviolet rays and injections of cleaning agents into patients.

Trump, who studied finance and real estate but touts his gut instincts about medical and scientific issues, brought up possible treatments including ‘injecting’ cleaning agents in the body and use of ultraviolet lights at Thursday’s White House press briefing.

William Bryan, an acting homeland security official, briefed the president, and later reporters, about new tests that showed how increased levels of sunlight, ultraviolet rays, and even humidity caused the coronavirus to die off in a reduced period of a time – potentially stemming its potency this summer.

‘It sounds interesting to me,’ Trump said Thursday, telling reporters he queried an official about whether cleaning agents could be injected into patients to fight the coronavirus

‘Supposing we hit the body with a tremendous, whether it’s ultraviolet or just very powerful light? And I think you said, that hasn’t been checked but you’re going to test it. And then I said supposing you brought the light inside the body which you can do either through the skin or in some other way. And I think you said you’re going to test that too. Sounds interesting,’ Trump said.

Then he raised another possible treatment. ‘And then I see the disinfectant, where it knocks it out in a minute, one minute, and is there a way we can do something like that? By injection inside or almost a cleaning. As you see it gets in the lungs, and it does a tremendous number on the lungs. So it would be interesting to check that,’ Trump said.

‘So that you’re going to have to use medical doctors. But it sounds interesting to me,’ he said.

Agents that are commonly used to kill the virus in the environment, bleach and isopropyl alcohol, are both toxic to the body when ingested. 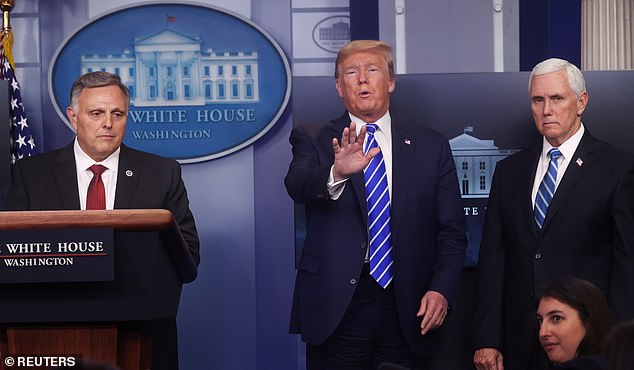 Trump, who noted he is not a doctor, did not guarantee results on his line of inquiry about a possible treatment.

‘So we’ll see. But the whole concept of the light, the way it kills it in one minute  –that’s pretty powerful,’ he said.

Vice President Mike Pence said the nation ‘could well give us a summer respite from the coronavirus.’

Bryan, whose formal title is Senior Official Performing the Duties of the Under Secretary for Science and Technology at the Department of Homeland Security, spoke about studies in a government lab.

It showed that temperature increases had gradually beneficial effects on cutting the ‘half-life’ of the virus, where it essentially breaks down.

But he noted that even if the virus dies atop playground equipment in the summer, it could still remain on surfaces that don’t get direct light or get less heat.

Trump then mentioned moving briefings to the Rose Garden for safety. ‘To me this is a very interesting meeting.’

He said of the government lab: ‘You can call it a laboratory because that’s essentially what it is.’

Brian is not a scientist, and has worked at the Energy Department and the Pentagon. He holds a Master of Science in strategic intelligence from the Joint Military Intelligence College in Washington, D.C. and a Bachelor of Science in logistics systems management from Colorado Technical University in Colorado Springs, Colorado.

Trump made the comments at a briefing where he attacked the ‘fake news’ and denied backing away from promoting hydroxychloroquine as a treatment for the virus.

Trump denied backing off his support for the treatment – although he has toned down his endorsements and not mentioned it as much in recent briefings. A recent study at the VA of patients found a higher death rate for those who got hydroxychloroquine and an antibiotic.

‘It’s a great for malaria for lupus and for other things and we’ll see what it is,’ Trump said of the drug, which he once said he himself might take.

He also bristled at a question about whether it could be a health risk if people take the new information and decide to blow off social distancing guidelines.

‘Here we go. The new headline is Trump asks people to go outside that’s dangerous,’ the president fumed.

‘I hope people enjoy the sun and if it has an impact, that’s great,’ he said.