President Trump threatened to sue his campaign manager Brad Parscale during a furious phone call Friday, in the wake of his poll numbers plummeting and re-election chances diminishing.

CNN and then The New York Times reported on the back-and-forth Wednesday, noting that Parscale and Republican National Committee Chair Ronna Romney McDaniel had told the president to quit it with his daily coronavirus press briefings, as they were hurting him with swing-state voters.

On the call, Trump tore into Parscale for the cratering polls, as the campaign chief shot back, ‘I love you, too,’ according to The Times. 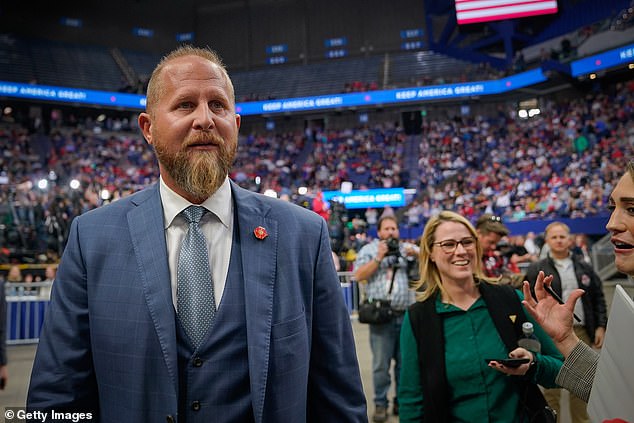 Trump has used his raucous almost-daily press briefings to sub in for his energetic rallies, but they haven’t had the same effect politically.

And then on Thursday, Trump seemingly floated that the coronavirus could be fought by putting sunlight in the body or injecting disinfectants, after hearing about a study that was looking at how long the virus lives on surfaces.

‘He’s p***ed because he knows he messed up in those briefings,’ one Republican who’s close to the White House told CNN in response to Trump’s Friday fight with Parscale.

The day before his disinfectant gaffe, Parscale and McDaniel, along with a handful of other top political advisers briefed the president on internal campaign numbers and data from the RNC.

Those numbers showed he was in a losing position in battleground states against Joe Biden, the presumptive Democratic nominee, who has been largely sidelined to holding livestreamed events in his Delaware basement due to the coronavirus pandemic.

Those on the call, according to CNN, urged him to scale back the press briefings as they showed him that they were hurting him with voters in swing states.

But Trump didn’t listen – and went ahead with the Thursday briefing as usual.

On Friday, the same day he laid into Parscale, the president shortened the briefing and didn’t take questions.

Over the weekend, he didn’t brief the press at all.

He did hold a briefing on Monday in the Rose Garden, but it was less combative than previous affairs.

And on Tuesday and Wednesday, Trump held events restricted to the smaller ‘pool’ of reporters who are assigned to follow him each day, instead of battling it out with a bigger group in the briefing room or Rose Garden.

Parscale and Trump have since patched things up, according to CNN’s reporting.

Due to coronavirus, Parscale had been social distancing from his south Florida home, but the network reported that he flew to Washington Wednesday to get some face time with his candidate, the president.