President Donald Trump said he will sign an immigration act soon that will take care of Dreamers as he claimed Democrats want to bring in ‘people who will blow up our cities.’

‘We’re going to be signing an immigration act soon,’ Trump said Tuesday, adding that he’ll ‘be taking care of DACA,’ using the acronym for Deferred Action for Childhood Arrivals.

He offered no details of what he would be signing – an act is legislation that must first be passed by Congress but, as president, he could sign an executive order on the matter. Trump has used his executive order power before on immigration and that is likely the path he would take again.

‘We will be signing a powerful immigration act. It’ll be great. It’ll be merit based,’ he said. ‘It’ll be strong on the border but you’ll come in legally.’ 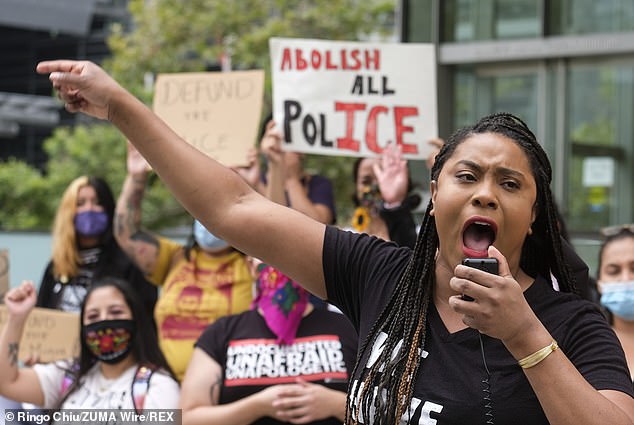 A participant speaks during a rally to celebrate the U.S. Supreme Court ruling rejected efforts to dismantle the Deferred Action for Childhood Arrivals (DACA) program, in front of the Los Angeles Police Department

Trump made his promise during an hour-long press conference in the White House Rose Garden billed as an event on Hong Kong but turned into a campaign rally and a rant against presumptive Democratic nominee Joe Biden.

The president charged that Biden wants to ‘end all travel bans including from jihadist regions.’

‘We got the travel ban,’ Trump added. ‘We have a very strong travel ban and we don’t want people that are going to come in and blow up our cities, do things.’

Trump used his executive power to issue a travel ban on citizens from countries that are mostly Muslim.

The president is facing an uphill battle to reelection in November and has made cutting immigration – both legal and illegal – a cornerstone of a platform aimed at his white, working-class base.

He said DACA and immigration would be handled in a ‘Republican way.’

‘We will be taking care of people on DACA in a very Republican way,’ he said.

And he charged of Democrats: ‘They used it as politics and I’m using it to get something done.’

‘We will be doing for DACA what the Democrats had a chance to do and they never did it,’ he added.

Last Friday, the president said he would soon issue an executive order on immigration that includes a path to citizenship for the Dreamers, the people brought to America illegally as children.

But the White House quickly walked back the idea, saying hours later this was just a possibility in talks with Congress on immigration reform. Many Republican lawmakers oppose a pathway to citizenship for Dreamers.

‘I’m going to do a big executive order. I have the power to do it as president and I’m going to make DACA a part of it,’ Trump said in an interview with Telemundo.

The Deferred Action for Childhood Arrivals program began in 2012 under then-president Barack Obama and has allowed some 700,000 people brought without papers to the United States as children to live, work and study without danger of being deported. Most of them are Latin American.

In 2017, Trump tried to cancel the program but the Supreme Court ruled last week that the administration had acted with weak legal justification and let DACA stand for now.

The ruling suggested there are legal administrative methods Trump could use to cancel DACA, putting the onus back on the administration if it wants to pursue the issue.

Trump tweeted in June – shortly after the Supreme Court ruling – his administration would be submitting a new proposal on the matter.

Trump said in the interview that in the wake of the court ruling, he would issue an order addressing migration issues that include DACA. 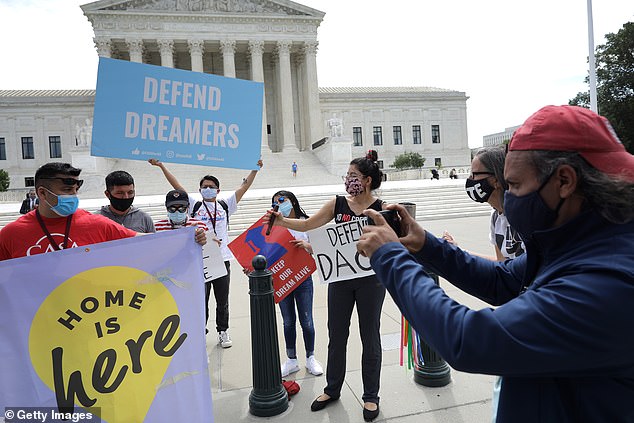 Advocates for immigrants with Deferred Action for Childhood Arrivals, or DACA, rally in front of the U.S. Supreme Court June 15, 2020

‘We’re going to have a road to citizenship,’ he said.

Hours after Trump spoke, the White House put out a statement that seemed to walk back his remarks on creating a path to citizenship for DACA beneficiaries.

‘As the President announced today, he is working on an executive order to establish a merit-based immigration system to further protect US workers,’ White House spokesman Judd Deere said.

‘Furthermore, the President has long said he is willing to work with Congress on a negotiated legislative solution to DACA, one that could include citizenship, along with strong border security and permanent merit-based reforms,’ he added.

‘Unfortunately, Democrats have continually refused these offers as they are opposed to anything other than totally open borders,’ Deere added.