President Donald Trump’s Washington D.C. hotel was party central Wednesday night for MAGA supporters, offering them a ‘convention celebration’ with the first family and a chance to sip bourbon with Senator Rand Paul.

With the convention speeches centered around the White House or the Andrew Mellon Auditorium, it was the Trump International Hotel D.C. that became ground zero for the panels, parties and events that typically surround the a presidential coronation.

Called a ‘convention celebration,’ attendees wore badges like a delegate would with their name on the front and the Trump Pence campaign logo on the back.

The badge got them a large goodie bag – woven gold material with the presidential seal on it – and access to the first family, prominent Republican lawmakers and some of the top names in the Trump administration – all in the president’s hotel lobby and conference rooms. 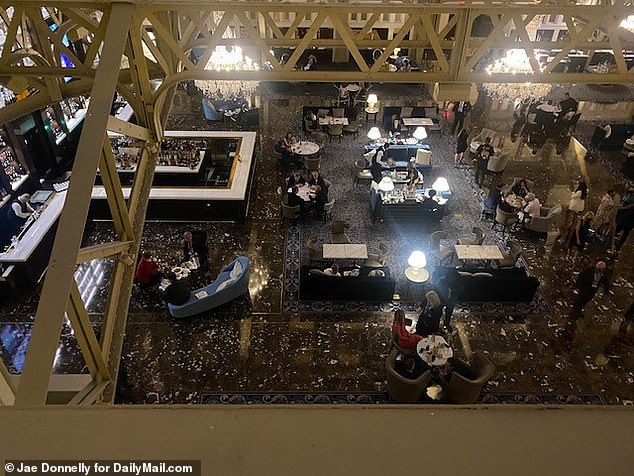 President Trump’s DC hotel was ground zero for parties, panels and events surrounding the Republican National Convention – and there was good people watching in the lobby 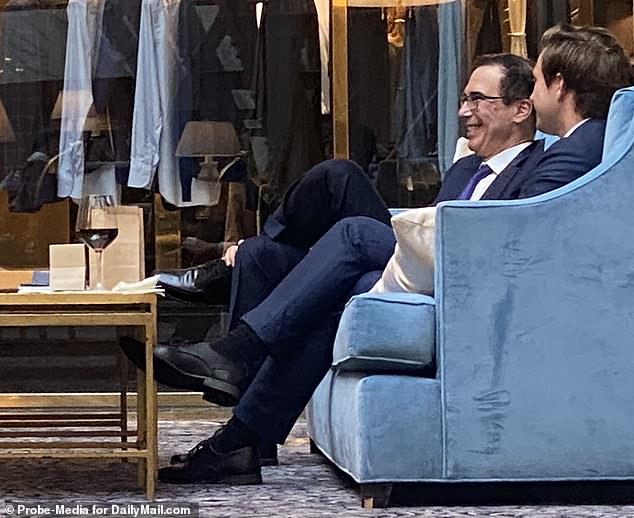 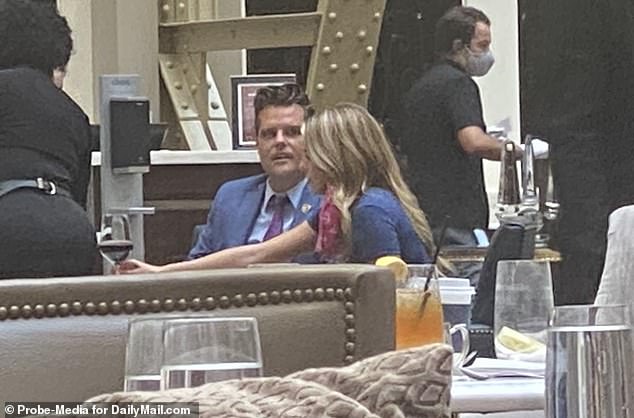 Wednesday was the main party evening. Donald Trump Jr. and girlfriend Kimberly Guilfoyle hosted ‘A Toast to America Reception’ along with Tiffany Trump and her boyfriend Michael Boulos and John Pence, the nephew of Vice President Mike Pence.

There was also a special reception with Peter Navarro, the administration’s senior adviser on trade issues and, later in the evening, was a bourbon tasting with Kentucky Senator Rand Paul.

But simply camping out in the ornate lobby of the hotel offered a chance to see some of the Trump world stars.

Excited attendees sneaked iphone photos of Navarro and lined up down the hall to get into a private reception with him.

Seated in the corner on a couch, sprawled and comfortable, was Treasury Secretary Steve Mnuchin, looking amused.

Guilfoyle was in out of the lobbying throughout the day and evening – wearing a fire-engine red pants suit in the afternoon and a cream dress in the evening – walking and talking in stiletto heels.

Eric and Lara Trump hung out at one of the small tables in the bar evening Wednesday evening, chatting with anyone who stopped by.

Former New York City Mayor Rudy Giuliani, the president’s personal attorney, spent much of the past two days behind the velvet rope of the closed-off BLT Prime steak house in the hotel, appearing to record a podcast or some time of program.

The steak house, one of the president’s favorite places to have his steak with ketchup, salad with ranch dressing and a coke, is closed because of the coronavirus pandemic.

Closed to the general public that is.

Members of the Trump family used it as their private dining spot. On Wednesday, Donald Trump Jr., Eric Trump and Tiffany Trump were all spotted in its upstairs dining room at lunch time.

And being there was about being seen. The third night of the Republican National Convention played on giant TV screens on either side of the bar – two TVs tuned to CNN, two to Fox News – but music filled the area, not the political speeches. 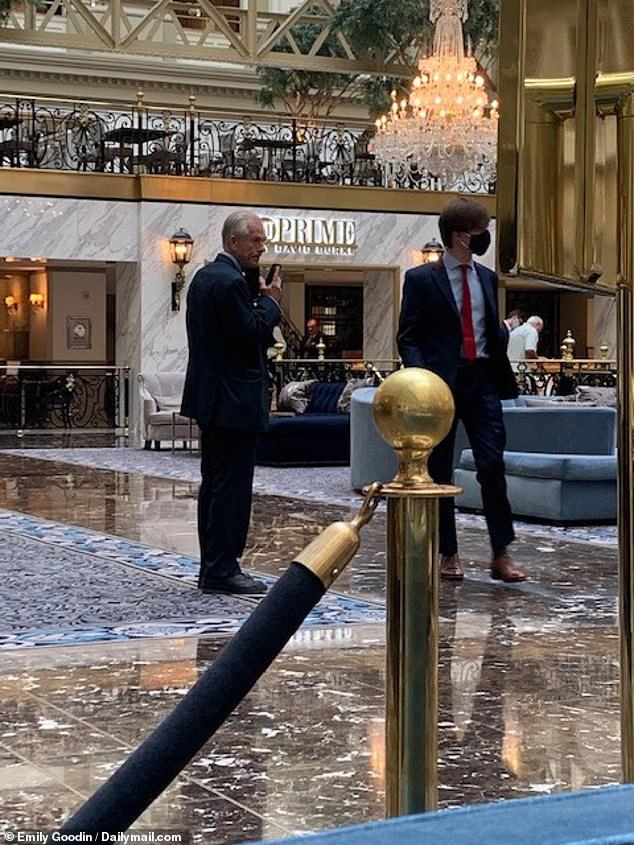 There was a special reception with Peter Navarro, the administration’s senior adviser on trade issues, at the president’s hotel 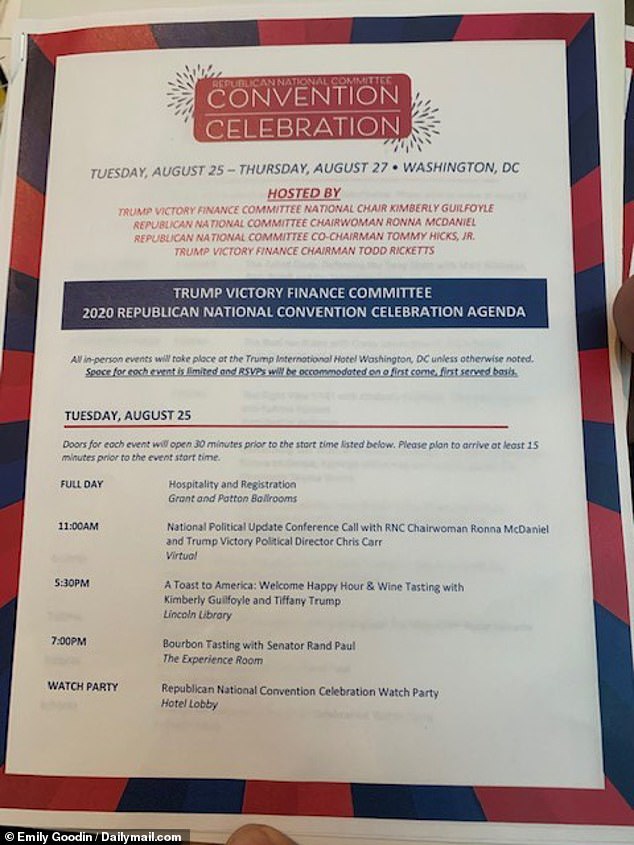 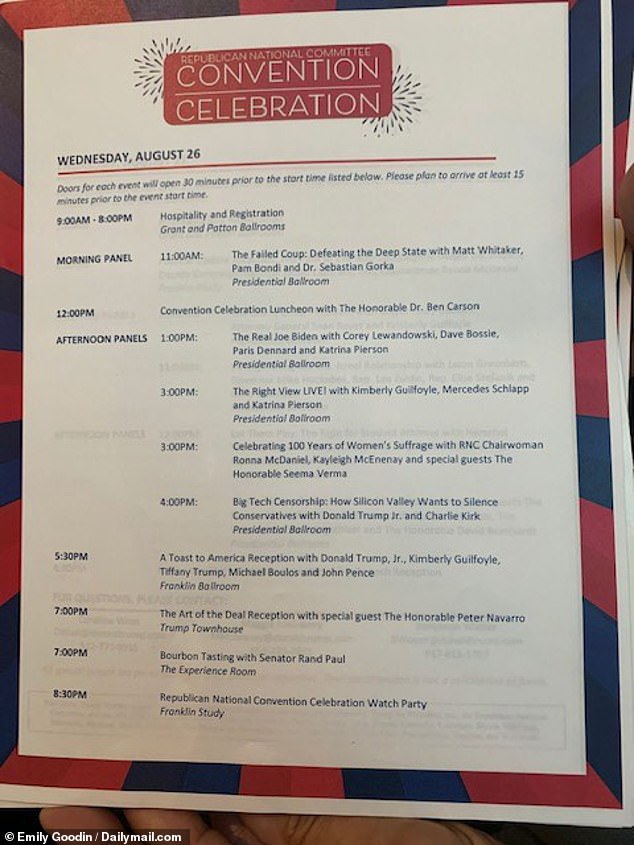 Other Trump allies were spotted walking through during the evening, including Republican Congressman Matt Gaetz of Florida, and there were random sightings, like that of Jackie Siegel, who was the subject of the 2012 documentary film ‘The Queen of Versailles.’

Marla Maples, the mother of Tiffany Trump and second wife of President Trump, slipped through the lobby in a red dress on Wednesday evening, the day after her daughter addressed the convention.

The evening receptions capped off a day of MAGA-friendly program, including, according to a copy of the agenda obtained by DailyMail.com:

Hotel staff wore face masks and so did attendees of the ‘convention celebration’ and members of the first family.

Unclear was how many people were invited and how the invites worked – and the cost. 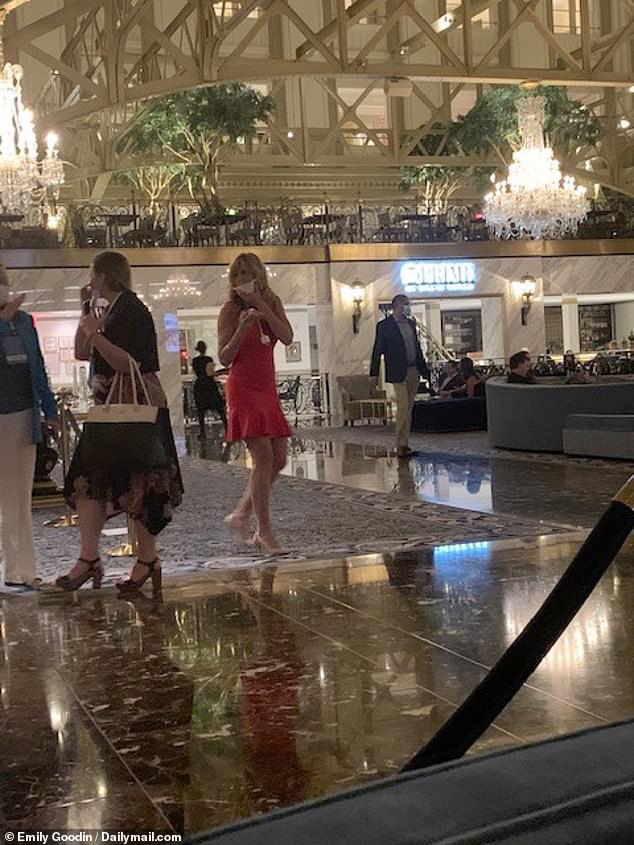 Marla Maples, the mother of Tiffany Trump and second wife of President Trump, was at the Trump hotel for the convention 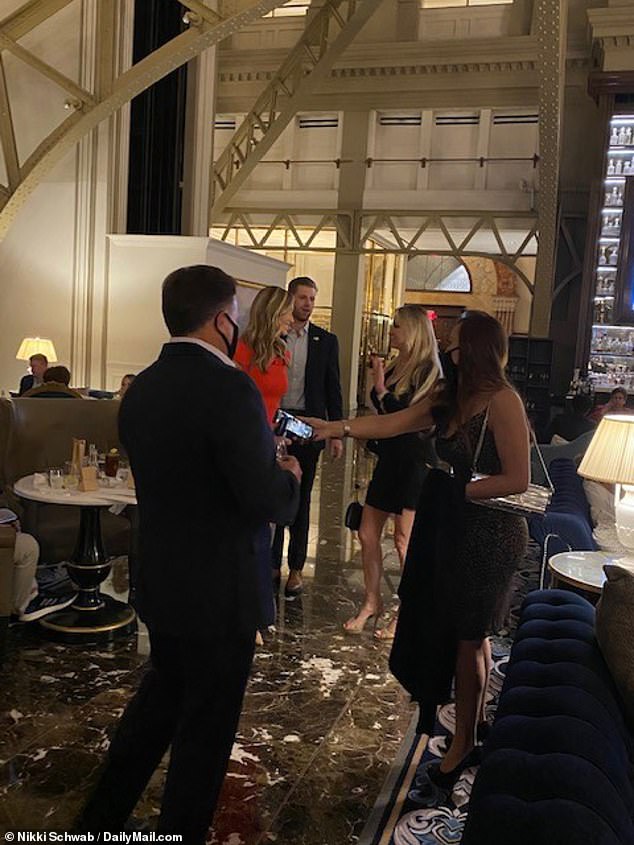 Lara Trump speaks with Jackie Siegel, who was the subject of the 2012 documentary film ‘The Queen of Versailles’ 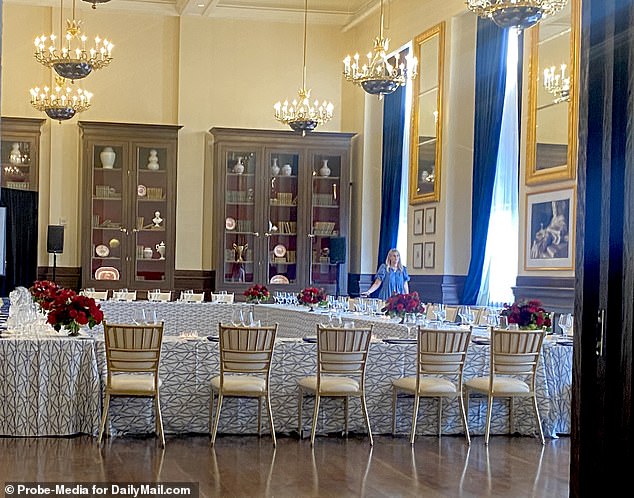 The hotel was sold out Wednesday and Thursday night with prices hitting nearly $800 for a basic room.

The Republican Party and the Trump campaign did not respond to requests for comment about Wednesday’s events.