President Donald Trump held another campaign-style at the White House Thursday, where he touted efforts to slash regulations in areas ranging from clean water to fair housing – all staged under a crane bearing his name and holding giant weights.

As he extolled the benefits of regulatory cuts, Trump repeatedly attacked rival Joe Biden as he did at an hour-long event in the White House Rose Garden Wednesday, drawing howls from critics for the use of the taxpayer-funded building.

Thursday’s event featured two new Chevy pickup trucks – one red, and one blue. A crane with a ‘Trump Administration’ banner had three weights suspended over the red truck, with three weights stacked in the blue truck in prop meant to illustrate the burden of regulation.

President Donald J. Trump speaks during an event on the South Lawn of the White House in Washington, DC, USA, 16 July 2020. It included two large Chevy trucks and a crane that said ‘Trump Administration’

As he read through his remarks on a teleprompter, the president delivered one of his trademark riffs about poor water pressure, which he tied to regulatory issues.

He complained about the annoyance of poor water pressure in the home, only this time instead of focusing on toilets, as he has in the past, he spoke about showers and dishwashers.

‘We are bringing back consumer choice in home appliances so that you can buy washers and dryers, shower-heads and faucets,’ Trump said.

He complained about regulations intended to reduce water consumption. 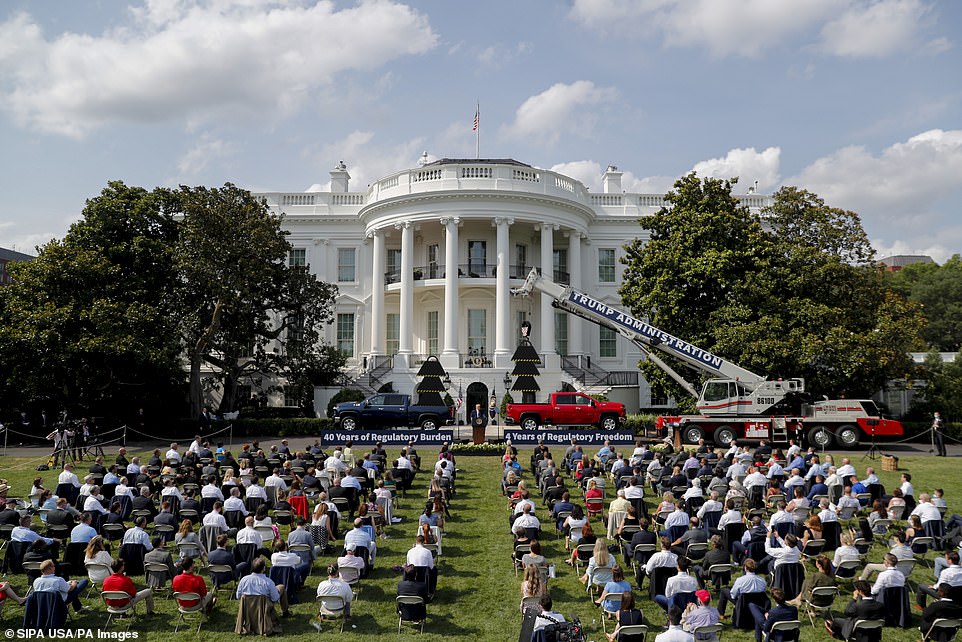 REGULATED: About 200 attendees were seated in rows. There were two large bottles of hand sanitizer and a military band playing ‘Georgia’ and ‘God Bless America’ 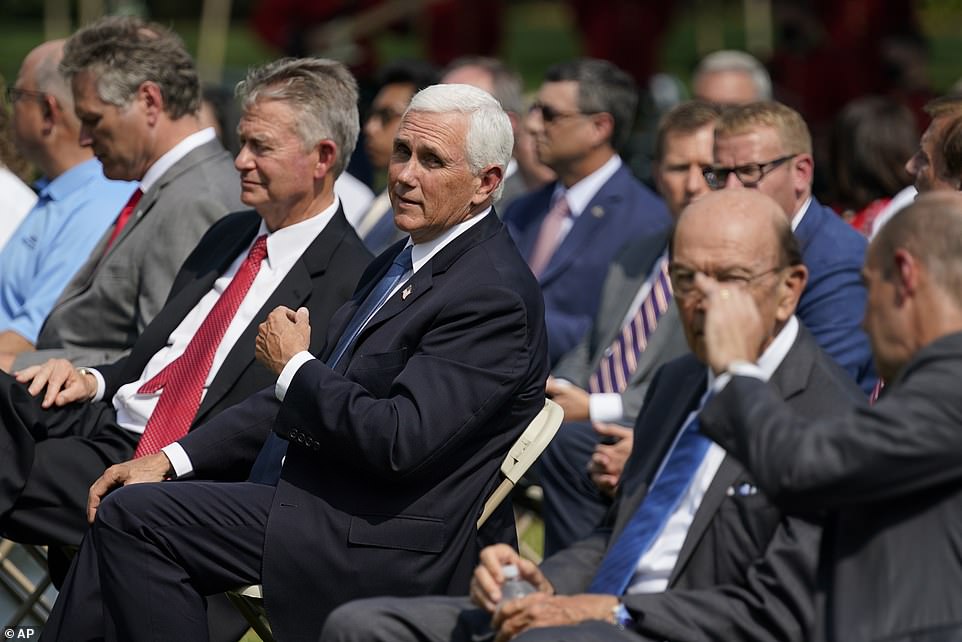 Vice President Mike Pence waits of an event on regulatory reform to begin on the South Lawn of the White House, Thursday, July 16, 2020, in Washington 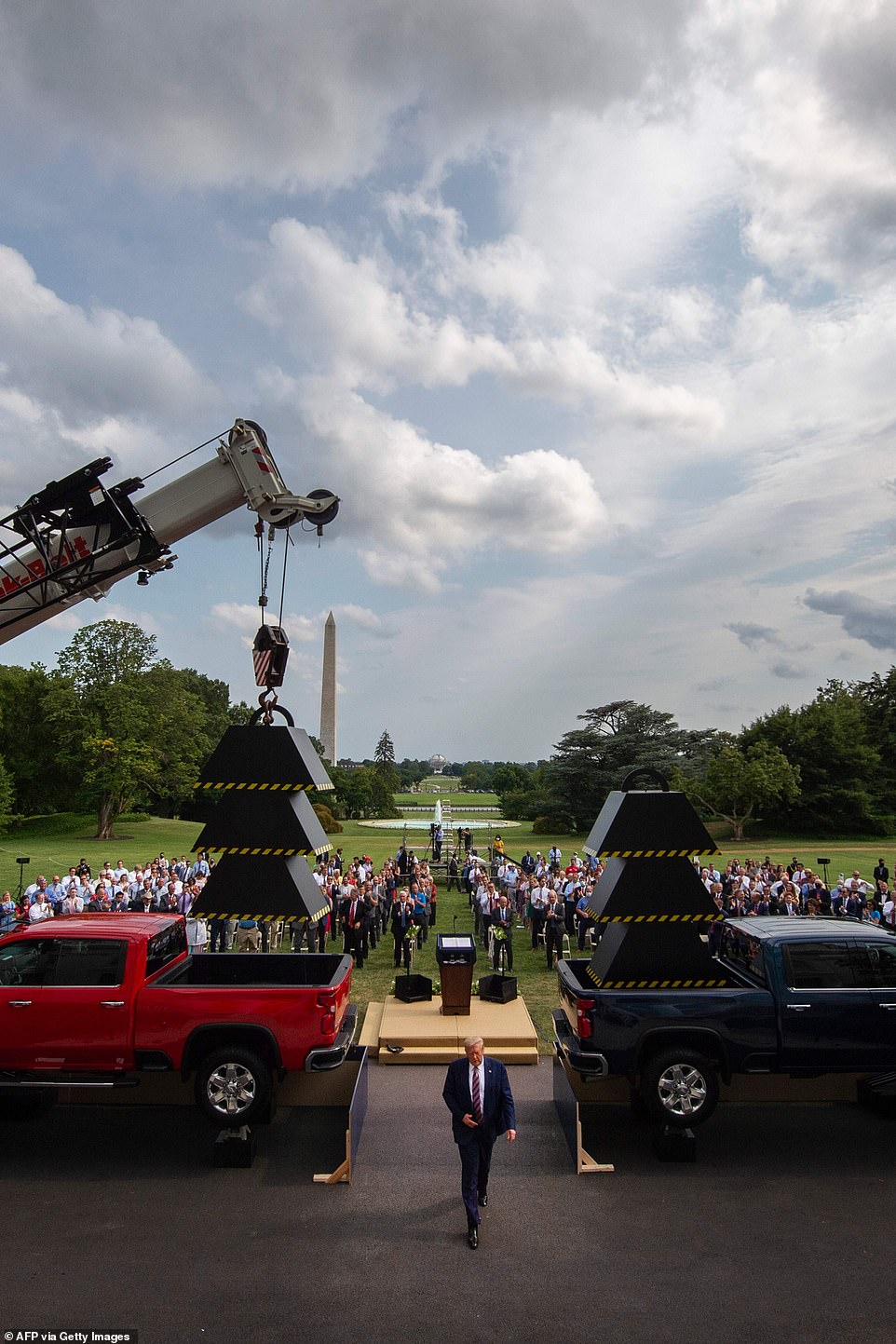 President Donald Trump walks past weights and a crane after delivering remarks on Rolling Back Regulations to Help All Americans on the South Lawn at the White House on July 16, 2020 in Washington,DC 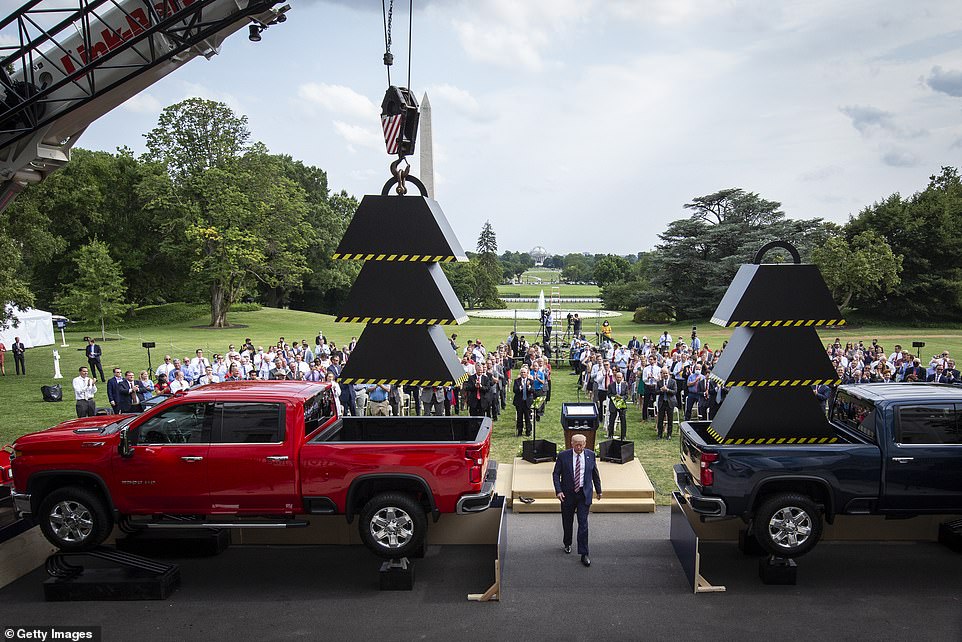 ‘Dishwashers, you didn’t have any water, so you – the people that do the dishes, you press it and it goes again. And you do it again and again. So you might as well give them the water because you’ll  end up using less water. So we made it so dishwashers now have a lot more water and in many places, in most places of the country, water is not a problem. They don’t know what to do with it. It’s called rain.’

There was a regulatory push beginning in the George W. Bush administration to phase-out the 100-watt bulb and steer Americans toward energy efficient alternatives.

‘I brought them back. They have two nice qualities: they’re cheaper and they’re better. They look better, they make you look so much better. That’s important to all of us,’ Trump said, blasting regulations that mandated compact fluorescent and LED bulbs.

As at Wednesday’s event, Trump delivered slashing attacks on Biden, the ‘green new deal,’ ‘socialist’ Sen. Bernie Sanders, and radicals he said wanted to both take down and rename the Washington Monument.

He also delivered a pointed attack on Democrats regarding the suburbs – a political battleground where Trump has been hemorrhaging support among college-educated white women.

‘They want to defund and abolish your police and law enforcement while at the same time destroying our great suburbs. The suburb destruction will end with us next week,’ Trump claimed, following losses of GOP House seats in 2018 in the suburbs.

‘I will be discussing the AFFH rule. The AFFH rule,’ Trump stressed, pointing to a fair-housing regulation he called ‘a disaster.’

‘And our plans to protect the suburbs from being obliterated by Washington Democrats, by people on the far left that want to see the suburbs destroyed, that don’t care.’

‘People have worked all their lives to get into a community and now they’re going to watch it go to hell. Not going to happen. Not while I’m here,’ Trump said.

Trump briefly tied regulations to the coronavirus that is ravaging the world, and is causing a spike in Florida that has his campaign scurrying to re-format his August convention.

‘We have taken more than 740 actions to suspend regulations that would have slowed our response to the China virus,’ Trump, said, using terminology that some term a slur.

Trump referred to the ‘Biden-Bernie plan’ to abolish cash bail. ‘Think of that. Bail. No problem. They killed somebody – let ’em out,’ Trump said, mischaracterizing proposals the two candidates proposed.

Cash bail systems allow some people to pay before trial, while those who can’t get the money must remain incarcerated – but people accused of the most violent offenses are in many cases detained.

‘They want to get rid of prison. They don’t think anybody should go to prison,’ Trump said.

Trump regularly tarred his opponents as ‘socialists,’ and cast them as in league with ‘unelected bureaucrats that don’t know what they’re doing.’

Trump promised a ‘very exciting eight weeks’ of ‘things that nobody has even contemplated, though about, thought possible.’

‘Eight weeks, I think Mike we can honestly say nobody’s ever going to see eight weeks like we’re going to have,’ Trump predicted.

Trump pledged to ‘never return to the days of soul-crushing regulations.’

Trump wasn’t shy about delivering direct attacks on Biden from the South Lawn of the White House.

‘Our entire economy and our very way of life are threatened by the Biden plan to transform our nation,’ he said.

He had an aesthetic complaint about Biden’s call for zero-emissions from new homes and buildings.

White House press secretary Kayleigh McEnany pushed back at complaints about using the White House for politicking when asked about Wednesday’s event.

She was asked if there was ‘any place in the White House where you think politics is inappropriate.’

‘Where do you draw the line?’ a reporter asked, pointing to Trump hosting a campaign team meeting in the Cabinet Room last month and then his Tuesday Rose Garden speech.

McEneny said the Hatch Act didn’t apply to the president and vice president and then challenged the reporter who said he wasn’t specifically asking about the legislation that limits federal employees from participating in political activities.

‘What your real problem was was the fact that the president gave a very, good, powerful speech from the Rose Garden,’ McEnany said, moving on to another question.