President Donald Trump began the week with more attacks on President Barack Obama, saying his predecessor didn’t have ‘a clue.’

It was the latest instance of Trump and his allies trying to shift the terrain of the 2020 elections, with the president suggesting his predecessors should be in jail and blaming Obama for shortages in the national medical stockpile and a slow start to coronavirus testing.

Trump issued his latest attack in response to a tweet from One America News Network headlined: ‘HHS Secy. Azar: America’s Coronavirus Response Has Been Historic.’ It featured comments by Health and Human Services Secretary Alex Azar praising the administration’s response.

‘True, except to the Fake News Media and a former president who didn’t have a clue!’ Trump Tweeted.

Trump’s pinned tweet, which remains on top of his feed, says simply: ‘OBAMAGATE!’

‘The Obama Administration is turning out to be one of the most corrupt and incompetent in U.S. history,’ Trump tweeted. ‘Remember, he and Sleepy Joe are the reasons I am in the White House!!!’

Obama has remained largely silent in the past on Trump’s actions as president, only issuing veiled indications of disapproval. 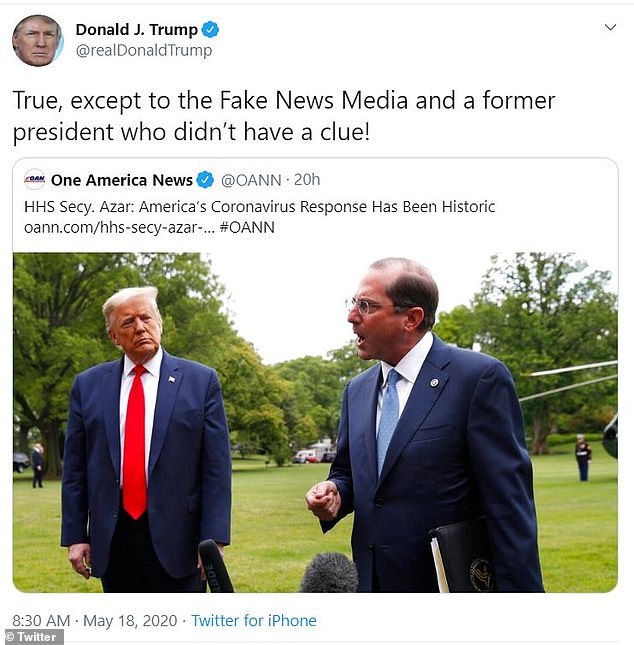 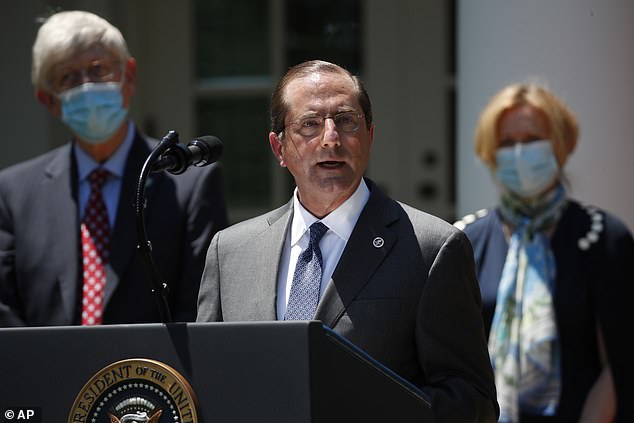 In the hour-long televised special, Obama panned ‘so-called grown-ups, including some with fancy titles and important jobs’ who do ‘what feels good, what’s convenient, what’s easy.’

‘That’s how little kids think, which is why things are so screwed up,’ the 44th President continued, and while he did not mention Trump by name, there was no mistaking who he meant.

Obama’s was much more explicit in recording that leaked last week where he called the Trump administration’s response to the coronavirus that has now killed 90,000 Americans an ‘absolute chaotic disaster.’

Trump claimed as he returned to the White House from a working weekend at Camp David that he had not heard the comments from Obama’s commencement address. 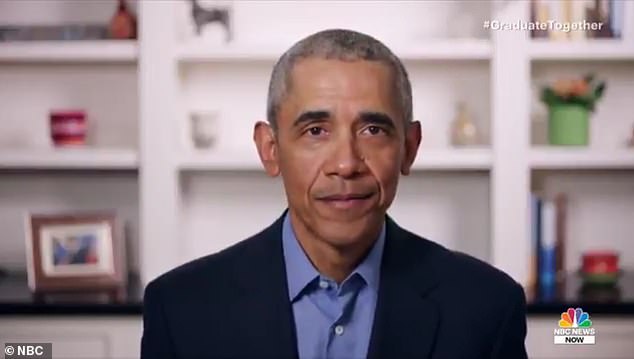 When the reporter tried to describe what the comments were, Trump dismissed Obama as ‘incompetent.’

‘Look, he was an incompetent president That’s all I can say. Grossly incompetent,’ he asserted.

In another tweet, Trump blamed Obama for the lack of protective medical gear and ventilators in the national stockpile, and once again connected him to early shortages in coronavirus testing, although the virus was not identified until the end of 2019.

‘We have done a great job on Ventilators, Testing, and everything else. Were left little by Obama. Over 11 million tests, and going up fast. More than all countries in the world, combined,’ Trump wrote.

Trump also tore into Obama and his former vice president, Joe Biden, in an interview with Fox Business which aired in full Sunday.

‘This was all Obama. This was all Biden. These people were corrupt – the whole thing was corrupt, and we caught them,’ Trump said.

Donald Trump suggested Obama and Biden should face jail time for involvement in the Michael Flynn case – and the president followed up with a tweet insisting he was elected due to his predecessor’s ‘corrupt’ administration.

‘It was the greatest political crime in the history of our country,’ Trump.

‘If I were a Democrat instead of a Republican, I think everybody would have been in jail a long time ago, and I’m talking with 50 year sentences.’

He continued: ‘It is a disgrace what’s happened this is the greatest political scam, hoax in the history of our country. And people should be going to jail for this stuff and hopefully, a lot of people are going to have to pay.’

Trump also said his 2016 opponent Hillary Clinton should be jailed.

His attack followed information declassified by his director of national intelligence showing Biden was among the Obama administration officials who sought ‘unmasking’ information on the official who turned out to be Flynn after his conversations with Russia’s then-ambassador to the U.S. got picked up on intercepts.

Trump lauded the decision by Bill Barr’s Justice Department to drop the case against General Flynn, who had already pleaded guilty under oath. Trump called him a ‘hero’ for dealing with the charges.