The city is on lockdown as armed police battled to contain ‘yellow vest’ demonstrators with more than 500 arrests so far today in the fourth straight weekend of demonstrations over living costs and proposed tax rises in France.

After the US withdrew from the Paris climate change agreement last year, calling it an economic burden, the leader appeared to claim the protesters were calling for his leadership over France. 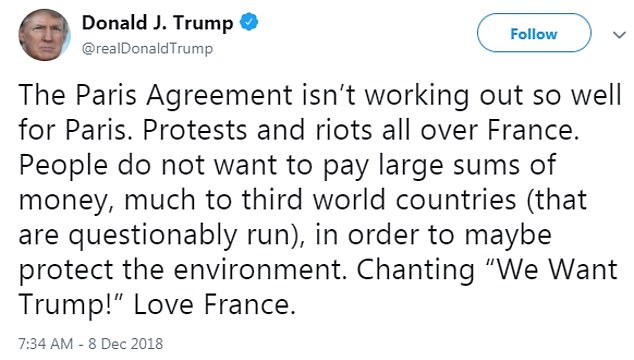 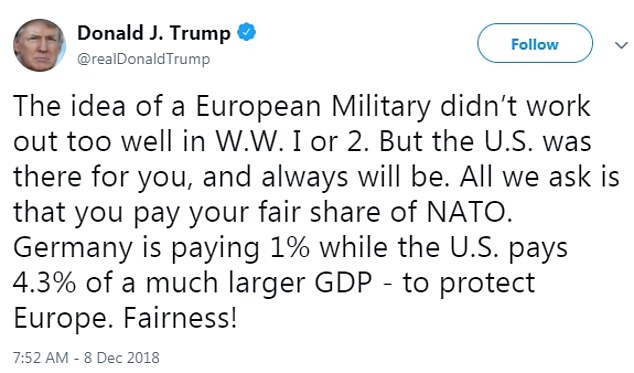 Trump, 72, then criticized the Europe in a second tweet saying that the United States spends money protecting the continent

‘The Paris Agreement isn’t working out so well for Paris,’ he wrote. ‘Protests and riots all over France. People do not want to pay large sums of money, much to third world countries (that are questionably run), in order to maybe protect the environment. Chanting “We Want Trump!” Love France.’

Trump, 72, then criticized Europe in a second tweet Saturday morning saying that the United States spends money protecting the continent.

He continued about the financial strain: ‘The idea of a European Military didn’t work out too well in W.W. I or 2. But the U.S. was there for you, and always will be. All we ask is that you pay your fair share of NATO. Germany is paying 1% while the U.S. pays 4.3% of a much larger GDP – to protect Europe. Fairness!’

American conservative youth activist Charlie Kirk tweeted a claim that originated on the Rush Limbaugh talk-radio program, that ‘We want Trump’ was ‘being chanted through the streets of Paris’ 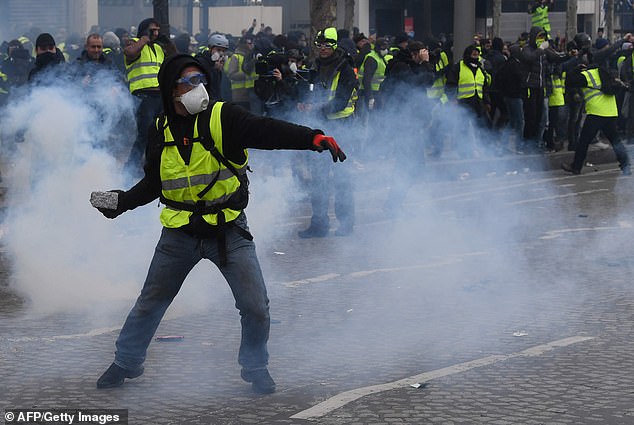 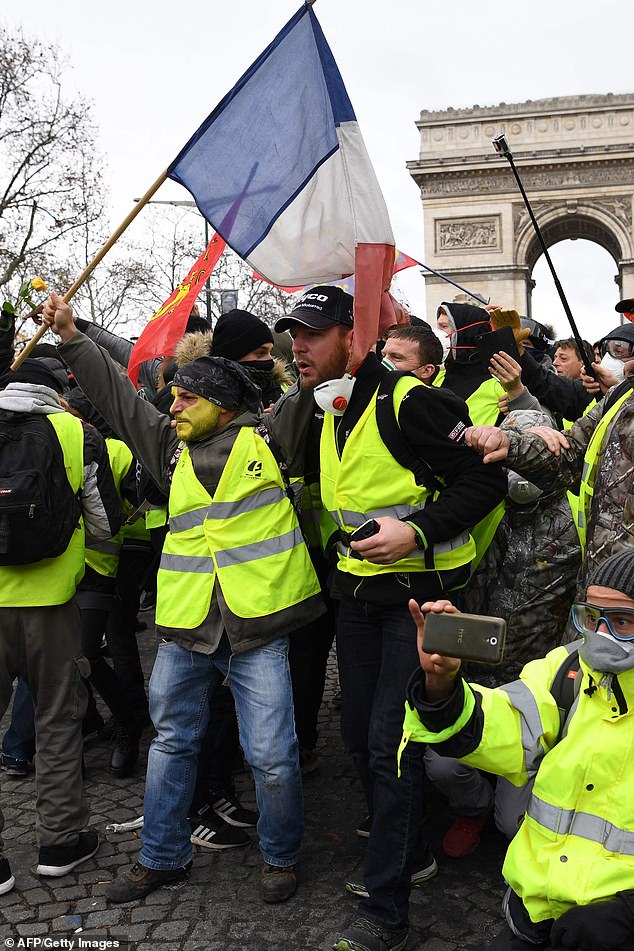 Dozens of streets in central Paris were closed to traffic, while the Eiffel Tower and world-famous museums such as the Musee d’Orsay, the Centre Pompidou and the Louvre closed 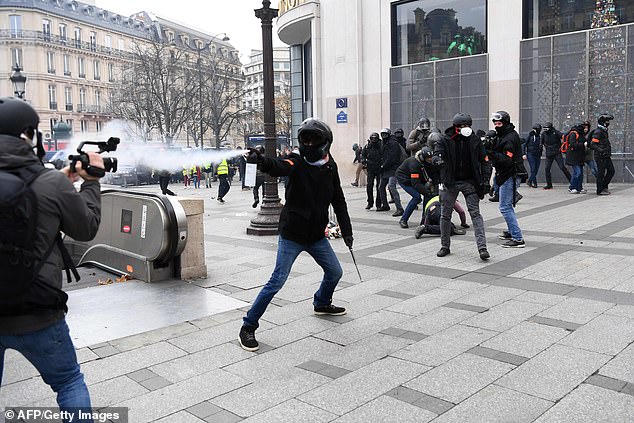 About 8,000 were deployed in Paris this weekend to avoid a repeat of last Saturday’s mayhem when rioters torched cars and looted shops

On Tuesday Trump began to spread a famous right-wing radio host’s unproven claim that rioters in Paris have been heard shouting that they want the president to replace their own.

He retweeted a message from Charlie Kirk, president of the conservative Turning Point USA youth organization, that ‘We want Trump’ is ‘being chanted through the streets of Paris.’

Kirk appeared to take that claim from a broadcast Monday of Rush Limbaugh, who said French President Emanuel Macron has seen a proposed fuel tax increase – a measure intended to fight global warming – generate riots larger than any ‘since the student protests of May 1968.’

‘You know what’s been overheard in some of the cheering over there? I kid you not. I know friends who are there,’ Limbaugh said. ‘There are some people wearing the yellow vests chanting, “We want Trump” among the rioters in Paris! “We want Trump!”’

No video has surfaced showing Parisians yelling for Trump to be their president.

Google had one video that appeared to match but its owner changed the title to reflect that it was Britons, not French, chanting the slogan.

Dozens of streets in central Paris were closed to traffic, while the Eiffel Tower and world-famous museums such as the Musee d’Orsay, the Centre Pompidou and the Louvre were closed.

Dramatic photographs offer a snapshot into the volatile atmosphere surrounding the streets of France, as ‘yellow vests’ continue to demand more concessions from the government after Macron’s U-turn on the fuel tax.

Many shops were boarded up to avoid looting, and street furniture and construction site materials have been removed to prevent them from being used as projectiles. About 89,000 police were deployed across the country.

Of these, about 8,000 were deployed in Paris to avoid a repeat of last Saturday’s mayhem when rioters torched cars and looted shops off the famed Champs Elysees boulevard, and defaced the Arc de Triomphe monument with graffiti directed at President Emmanuel Macron.