President Donald Trump reiterated his disdain for professional athletes protesting racism by kneeling during the national anthem early Tuesday morning just hours after the San Francisco Giants’ Gabe Kapler became the first major league manager to do so alongside his players.

‘Looking forward to live sports, but any time I witness a player kneeling during the National Anthem, a sign of great disrespect for our Country and our Flag, the game is over for me!’ Trump tweeted Tuesday morning.

Beginning in September of 2017, when Trump first seized upon the issue during a rally in Alabama, the President has repeatedly voiced his objections, mentioning the word ‘anthem’ in no fewer than 30 tweets over that time.

Beginning in September of 2017, when Donald Trump first seized upon the issue, the President has objected to players protesting during the anthem in no fewer than 30 tweets 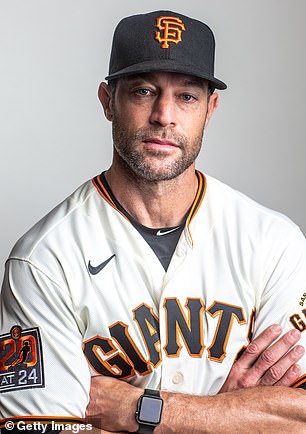 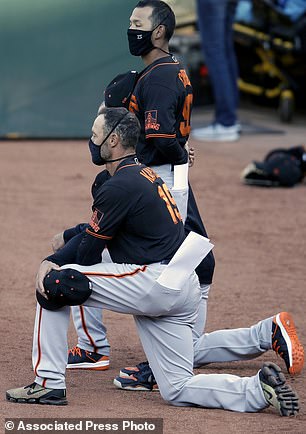 His latest offering came after Kapler’s decision to kneel during the anthem before Monday’s exhibition against the Oakland Athletics.

‘I wanted to demonstrate my dissatisfaction with our clear systemic racism in our country and I wanted them to know that they got to make their own decisions and we would respect and support those decisions,’ Kapler told reporters afterwards. ‘I wanted them to feel safe in speaking up.’

Giants first base coach Antoan Richardson as well as players Jaylin Davis, Austin Slater and Mike Yastrzemski also protested on Monday in Oakland, where catcher Bruce Maxwell became the first MLB player to do so in 2017.

The protests have occurred, predominantly, in the NFL, which has warmed up to the demonstrations since the killing of George Floyd, an African-American man who died during a violent arrest on May 25 in Minneapolis.

NFL Commissioner Roger Goodell said last month that the league made a mistake by not listening to players about racist police brutality.

Kaepernick has been a free agent since March of 2017, when he opted out of the final year of his contract in anticipation of his release. In February of 2019, the NFL settled a grievance with Kaepernick for an undisclosed amount after he accused league owners of blackballing him in retaliation for the controversial protests.

Trump responded to the NFL’s evolving position on player protests at a rally in Tulsa, Oklahoma last month by criticizing Goodell, the son of former republican senator Charles Goodell.

‘And explain this to the NFL,’ Trump told the crowd in Tulsa. ‘I like the NFL, I like Roger Goodell, but I didn’t like what he said a week ago.

‘I said, “Where did that come from in the middle of the summer?”‘ Trump continued, referring to Goodell’s apology to players. ‘Nobody’s even asking.

‘We will never kneel to our national anthem or our great American flag. We will stand proud, and we will stand tall.’