Donald Trump unveiled his long-awaited Middle East peace ‘vision’ Tuesday afternoon with embattled Israeli Prime Minister Benjamin Netanyahu at his side – saying there would be a ‘two-state solution’ with a tunnel linking the West Bank to the Gaza Strip.

Trump said it was a ‘vision for peace, prosperity and a new future’ for both Israel and Palestine as he spoke in the East Room of the White House, reading from a teleprompter and declining to take questions.

The White House pointedly did not call it a ‘plan,’ and Trump himself said Netanyahu had agreed it was a basis for ‘negotiation.’ But there was confusion over exactly what it was with Trump also tweeting that it was a ‘plan.’

He claimed Israel had a taken ‘a giant leap’ by signing up to a two-state solution and claimed it was a ‘win-win’ for both sides.

‘We will also work to create a contiguous territory within the future Palestinian state, for when the conditions for statehood are met, including the firm rejection of terrorism,’ he said.

The plan unveiled on Tuesday more than doubles the territory currently under Palestinian control, although it also recognizes Israeli sovereignty over major settlement blocs in the West Bank, something to which the Palestinians will almost certainly object.

The Palestinians were not present, nor were Democrats, and neither was Netanyahu’s chief opponent Benny Gantz, who he will face in an election in March. Netanyahu himself had hours earlier given up fighting for immunity from corruption charges and is now indicted on them.

But Trump said: ‘For the first time in many, many decades, I can say: This will work.’

Netanyahu said he backed the deal because it ‘recognized Israeli sovereignty over sections of Judea and Samaria’ – meaning sections of what is currently defined as the West Bank – ‘which are vital to our security.’

He said Trump had recognized that ‘Israel must have sovereignty in the Jordan Valley,’ something which Palestinians have said they will never agree to. 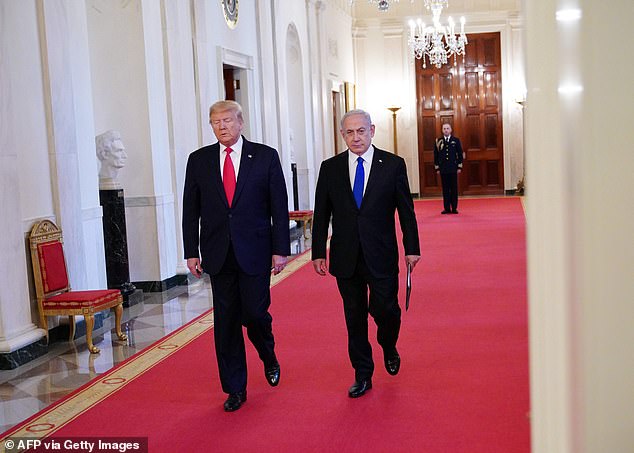 Side by side: Trump and Netanyahu arrive for the announcement on his peace plan 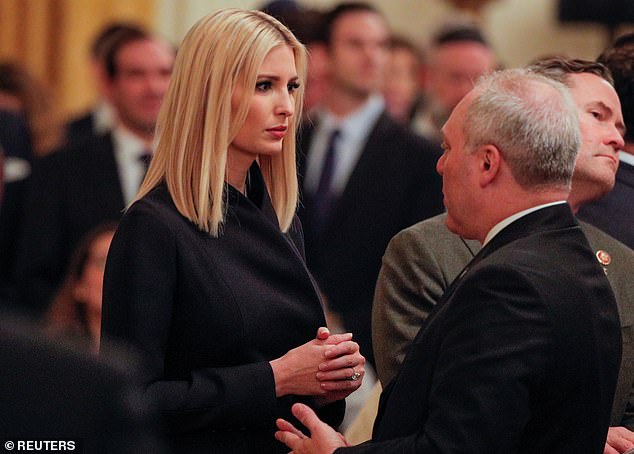 Family affair: Ivanka Trump and her husband Jared Kushner – who Trump credited for the peace plan – were in the East Room of the White House for the announcement 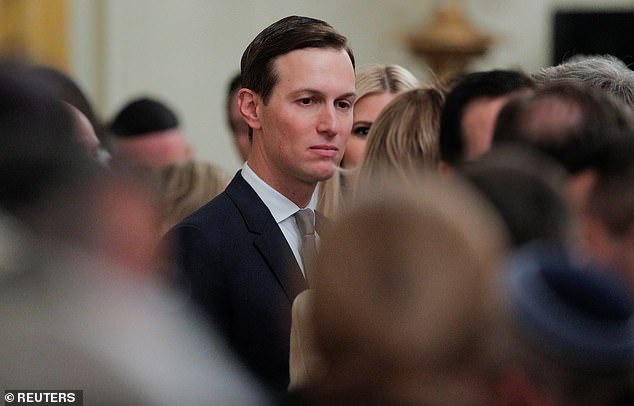 Praised: Donald Trump led applause for his son-in-law Jared Kushner calling him a ‘great deal-maker.’ Only one side of the two needed to make a deal was present

Trump use the speech to say he had been ‘good for Israel.’

boasted about moving the U.S. embassy to Jerusalem and recognizing the Golan Heights as Israeli territory – reversing decades of U.S. policy – and also boasted about leaving the Iran nuclear deal.

He claimed it could be a ‘last opportunity’ for the Palestinians to achieve statehood and gave as the reason the ‘smart team’ who had worked on it, highlighting the role of his son-in-law Jared Kushner, whose wife Ivanka was in the audience.

He also said he had told Mahmoud Abbas, the Palestinian prime minister that he needed to act while there was a four-year freeze on Israeli settlements in Palestinian territory.

‘I explained to (Abbas) that the territory allocated for his new state will remain open and undeveloped for a period of four years,’ Trump said.

‘This could be the last opportunity they will ever have.

‘Palestinians are in poverty and violence, exploited by those seeking to use them as pawns to advance terrorism and extremism.’

He said that Britain’s prime minister Boris Johnson was among world leaders who had called him, saying that leaders had offered ‘to do anything to help.’

He also praised Mike Pompeo, his secretary of state, who had been revealed to have threatened, berated and launched an f-word rant at an NPR reporter then complained because he thought she had agreed to keep it secret.

‘You did a good job on her,’ Trump said, a comment likely to be seized on by critics.

There was a standing ovation for Pompeo from an audience which included among others, prominent Jewish American including casino billionaire Sheldon Adelson, and Alan Dershowitz, fresh from defending Trump at his impeachment trial.

The plan, which has been shrouded in secrecy, was revealed as the president’s lawyers prepare to wrap his defense in his impeachment trial in the Senate.

The president said Monday of the plan that ‘we’ll see whether or not it catches hold.’

‘If it does, that would be great, and if it doesn’t, we can live with it, too. But I think it might have a chance,’ he said alongside Netanyahu at the White House on Monday, before he also hosted Netanyahu’s political challenger Benny Gantz.

Netanyahu, praising Trump as ‘the greatest friend that Israel’s had in the White House’, described the plan as ‘the deal of the century’.

Trump, whose team has long been working on the outlines of such a plan, has repeatedly boasted that he is the most pro-Israeli U.S. president in history.

On Monday, Trump also met separately with Gantz, but the limelight fell almost entirely on the incumbent prime minister – as will any political dividends from a peace plan favoring Israel.

No Palestinians have been invited to the White House event. They say they were never included in crafting the plan and they say it fails to address their wish to end Israeli occupation and the expansion, encouraged by Netanyahu, of Jewish settlements on Palestinian land.

Last week, Trump said he had spoken to the Palestinians ‘briefly’ about the plan.

‘We’ve spoken to them briefly. But we will speak to them in a period of time,’ he said. ‘And they have a lot of incentive to do it. I’m sure they maybe will react negatively at first but it’s actually very positive for them.’

Palestinian leaders have dismissed the U.S. peace initiative as one-sided.

And Palestinian prime minister Mohammed Shtayyeh on Monday urged international powers to boycott the plan, which he said was designed ‘to protect Trump from impeachment and protect Netanyahu from prison.’

Netanyahu faces corruption charges in Israel for bribery, fraud and breach of trust.

‘It is not a Middle East peace plan,’ Shtayyeh told a cabinet meeting. ‘This plan gives Israel sovereignty over Palestinian territory.’

Trump has slashed aid to the Palestinians, while making big concessions to the Israelis, including formalizing U.S. recognition of the divided city of Jerusalem as the Israeli capital.

‘It’s very good for them, in fact it’s overly good for them,’ Trump said Monday of the plan’s provisions for Palestine. ‘We think we will have ultimately the support of the Palestinians.’

The Palestinians seek the West Bank as the heartland of a future independent state and east Jerusalem as their capital. Most of the international community supports their position, but Trump has reversed decades of U.S. foreign policy by siding more blatantly with Israel. The centerpiece of his strategy was recognizing Jerusalem as Israel’s capital and moving the American Embassy there. He’s also closed Palestinian diplomatic offices in Washington and cut funding to Palestinian aid programs. 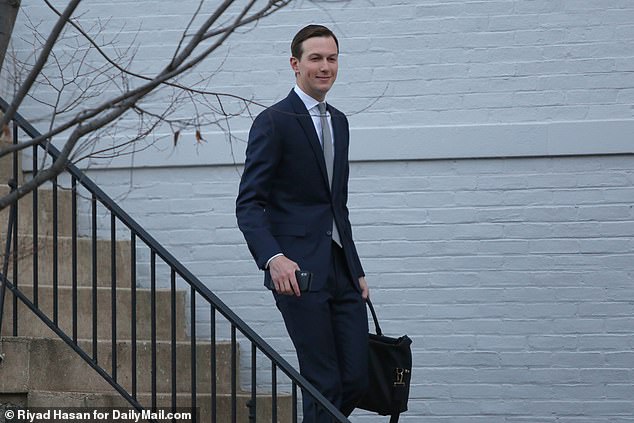 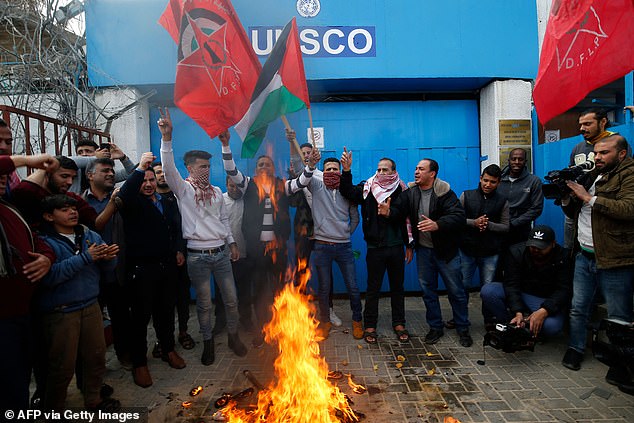 Those policies have proven popular among Trump’s evangelical and pro-Israel supporters and could give him a much-needed boost from his base as the Senate weighs whether to remove him from office and as he gears up for a reelection battle this year.

Kushner, a Trump adviser and the Republican president’s son-in-law, has been the architect for the plan for nearly three years. He’s tried to persuade academics, lawmakers, former Mideast negotiators, Arab governments and special-interest groups not to reject his fresh approach outright.

Trump’s peace initiative was expected in the autumn but has been subject to multiple postponements.

The Palestinians refuse to even speak to Trump, saying he’s biased in favor of Israel, and they are calling on Arab representatives to reject the Tuesday event at the White House.

The Palestinian leadership also has encouraged protests in the West Bank, raising fears that the announcement in Washington could spark a new round of violence. Ahead of the announcement, the Israeli military said it was reinforcing infantry troops along the Jordan Valley.

WHAT WE KNOW ABOUT TRUMP’S MIDEAST PEACE PLAN

More than two years after President Trump first proposed a plan to revive the Israeli-Palestinian peace process, it lies stalled half in and half out of the starting blocks.

Little has so far been revealed about the plan which will have to address issues that have defied decades of efforts by previous peacemakers.

-The status of Jerusalem – which includes sites sacred to Judaism, Islam and Christianity

-The Palestinian demand for statehood, and an end to Israel’s occupation of Palestinian territory.

-Finding a solution to the plight of millions of Palestinian refugees.

-Arrangements to share scarce natural resources, such as water.

Why revive the plan now?

U.S.-Israeli relations are at a zenith, with Trump and Netanyahu the closest of allies.

Both men face domestic troubles: Trump will likely be accused of trying to deflect attention away from his impeachment trial and Netanyahu was indicted on corruption charges in November, throwing him into legal limbo.

And both face election campaigns – Trump for re-election, and Netanyahu because he failed to put together a governing coalition in two elections last year.

What do we know about the plan?

Palestinian and Arab sources who have been briefed on the draft plan fear that it seeks to bribe Palestinians into accepting Israeli occupation, a prelude to Israel annexing about half of the West Bank.

Perhaps reflecting the business background of Trump and his son-in-law, Jared Kushner, the plan’s principal author, the first phase of the peace proposal was launched at an economic conference in Bahrain last June.

It called for a $50 billion investment fund to boost the Palestinian and neighbouring Arab state economies. Kushner said he believed a deal could unlock prosperity for the Palestinians, and security for Israel.

What are the plan’s chances?

Expectations are low. The last peace talks between Israelis and Palestinians collapsed in 2014.

The elephant in the room is the two-state solution – the long-standing international formula to bring about peace by creating an independent Palestinian state living side-by-side with Israel.

The United Nations and most nations around the world back the two-state solution, and it has underpinned every peace plan for decades.

But the Trump administration has consistently refused to back the two-state solution. And in November it reversed decades of U.S. policy, when Secretary of State Mike Pompeo announced that the U.S. no longer viewed Israel´s settlements on West Bank land as ‘inconsistent with international law’.

Palestinians and most of the international community view the settlements as illegal under international law. Israel disputes this, citing historical, biblical and political ties to the land, as well as its security needs.

Netanyahu has announced that he intends to annex all the settlements as well as most of the Jordan Valley, the strategic and fertile easternmost strip of the West Bank.

Palestinians argue that the Jordan Valley, nearly 30 per cent of the West Bank, would be a vital part of their future state, as the breadbasket of the West Bank and its external border with Jordan.

Palestinian President Mahmoud Abbas has said Washington can no longer be regarded as a mediator in any peace talks with Israel.

Since his election, Trump has made a series of moves that have delighted Israel but infuriated Palestinians. These include his 2017 decision to recognise Jerusalem as the capital of Israel, and to move the U.S. Embassy from Tel Aviv to Jerusalem.

The Palestinians fear the Trump plan will dash their hopes for an independent state in the West Bank, east Jerusalem and the Gaza Strip – territories Israel captured in 1967.

Abbas, whose Palestinian Authority exercises limited self-rule in the West Bank, has refused to engage politically with the Trump administration.